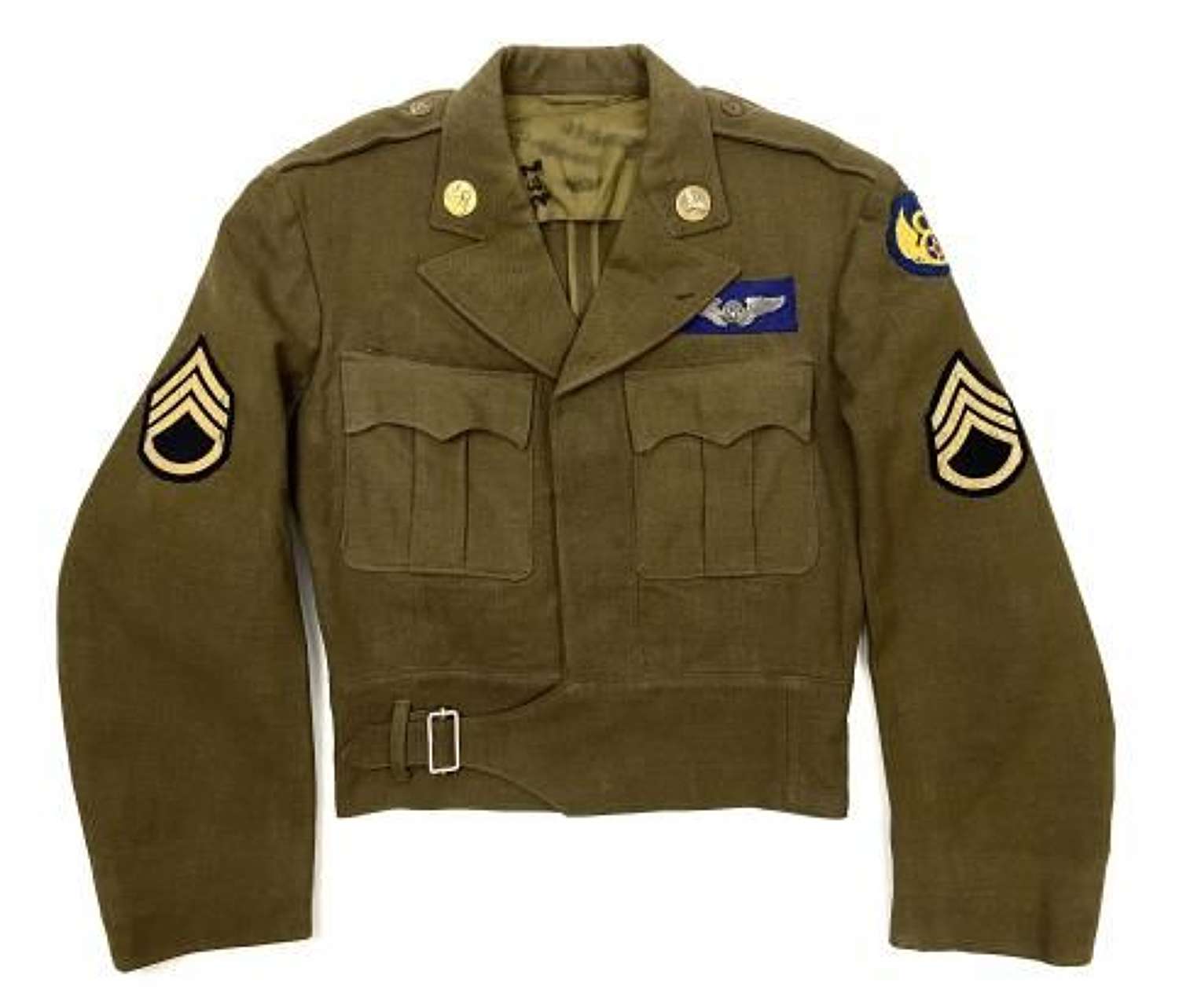 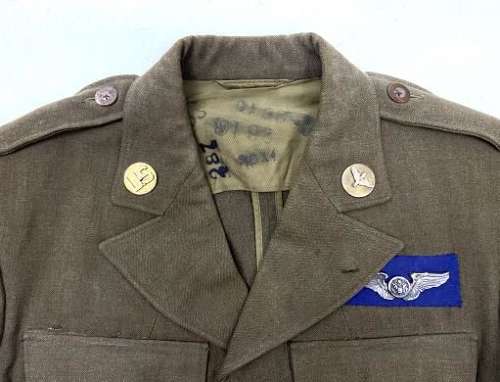 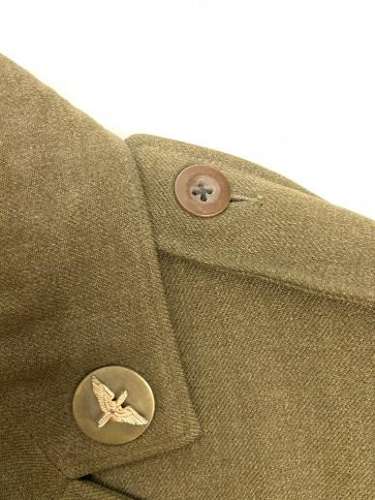 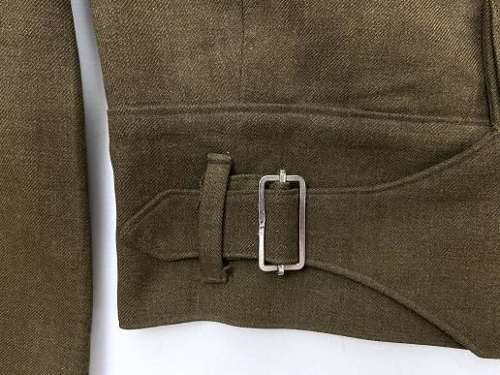 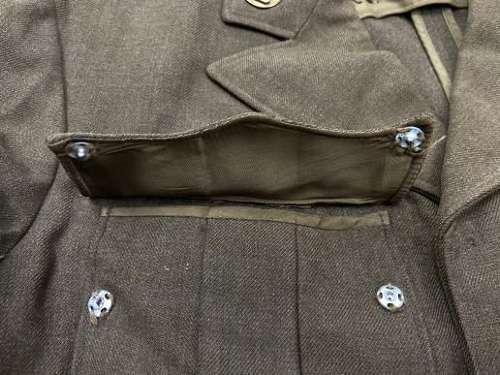 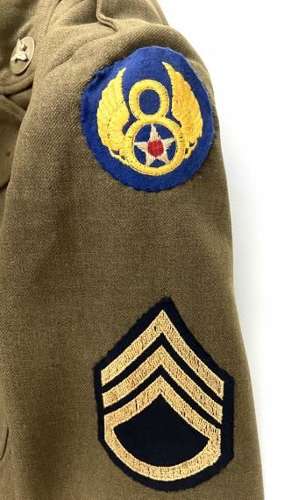 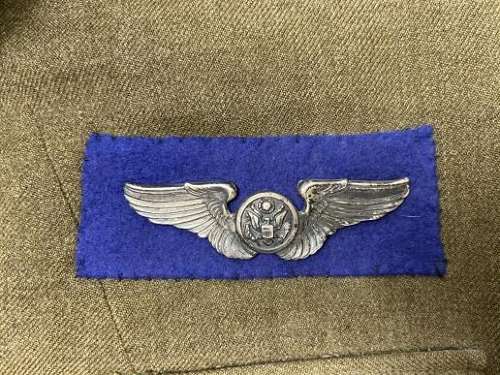 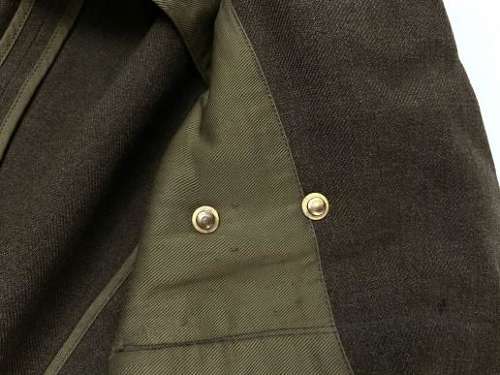 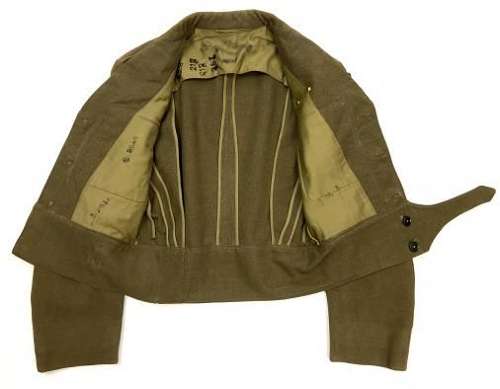 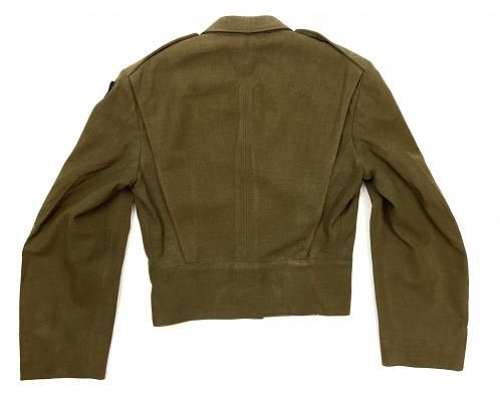 A fantastic original Enlisted Men's tunic which has been tailored in England during the Second World War.

This tunic would have started life as a standard issue EM tunic before being re-tailored into its current form. It was popular with US Airmen to modify their tunics by cutting them down in this way and is seen in plenty of period photographs. The Americans tended to have much more disposable income than their British cousins which they could spend on tailoring and the like.

This example has clearly been remodelled in the UK and features all British made insignia. The waist and belt section have been made from the excess material taken when cutting the tunic down. Another piece has been used to create a fly front, essentially covering the front buttons, which is again indicative of these tailored tunics. New pocket flaps have also been made and are a scalloped shape; emulating those found on officers tunics. They do not fasten with buttons but with pop studs in each corner. This is again a common practice to find on what is essentially a dress, or 'walking out' tunic. The rear of the tunic features an 'action back' which is another sought-after feature and the epaulettes are held in place with brown coloured horn buttons, which are again typically English.

The blouse comes complete with all of its original insignia which is British made. The aircrew wing is a nice example which is mounted on the ultramarine blue combat crew backing, worn by airmen flying in combat in the ETO and a common thing to find on original 8th Air Force tunics. The rear of the wing is held on with plain clutches which are typical of English made wings. Sergeant stripes are fitted to each sleeve and an 8th Air Force patch is located at the top of the left sleeve. The collar devices are two piece screw back examples with knurled nuts to the rear.

The tunic is a small size which will fit around a 34-36" chest and a 28" waist. More measurements can be supplied upon request.

The tunic is in reasonable condition for its age but is a little salty. It has clearly only just come out of storage after many, many years and shows various signs of age. There are plenty of signs of wear and the righthand horn epaulette button has started to decompose whilst in storage, although it is still present and functioning. There is a slit to the left lapel, although this looks to have been purposely done, perhaps to fit a badge to. There is another small hole above the right breast pocket which has a couple of stitches in and again looks as though it may have been specifically added for a badge. Whilst far from perfect the tunic does display very well and has a very authentic and consistent look to it.

A great opportunity to add an authentic British tailored Ike jacket which was worn by an Airmen of the Eighth Air Force as part of a crew flying combat missions to your collection!