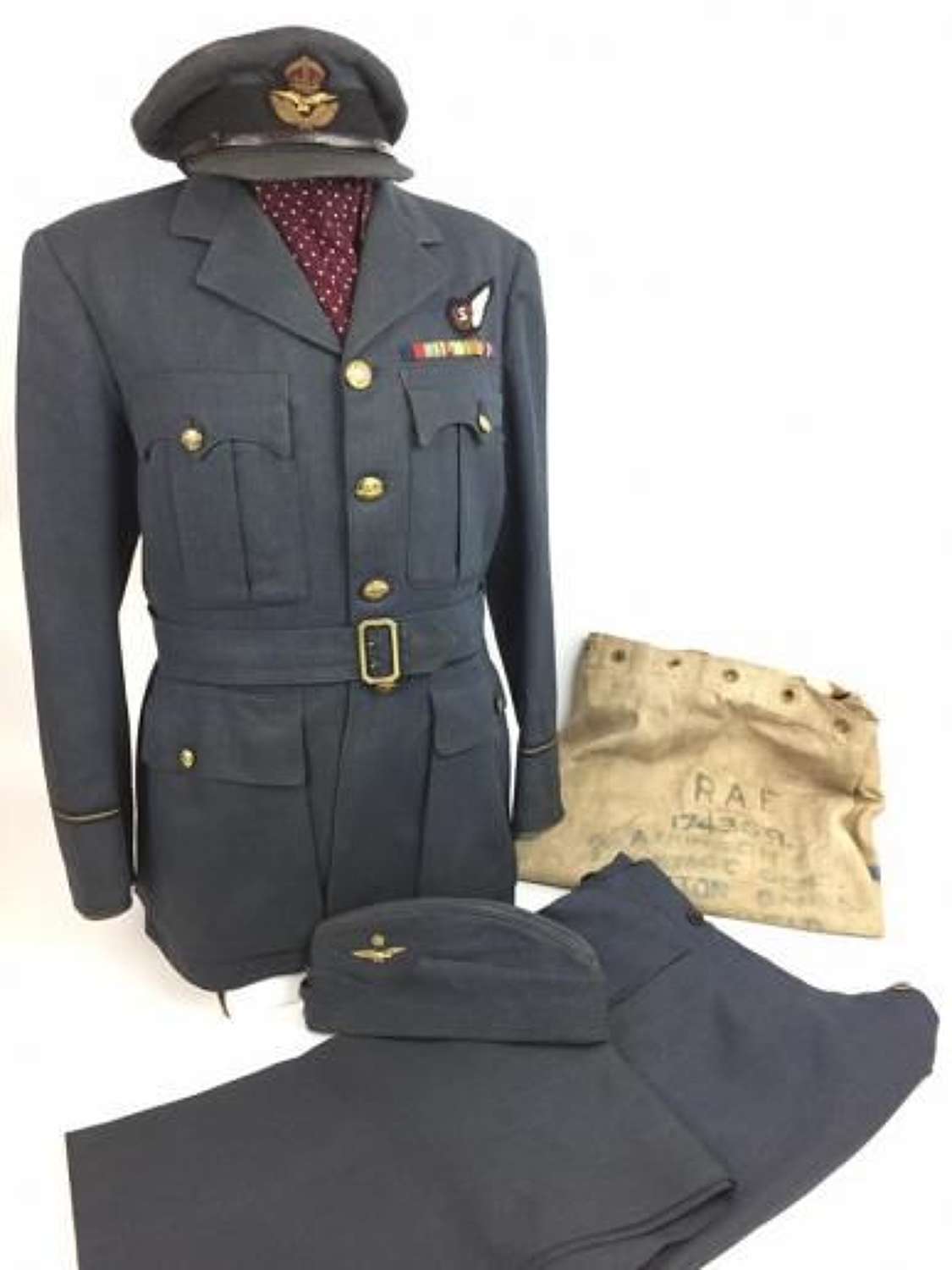 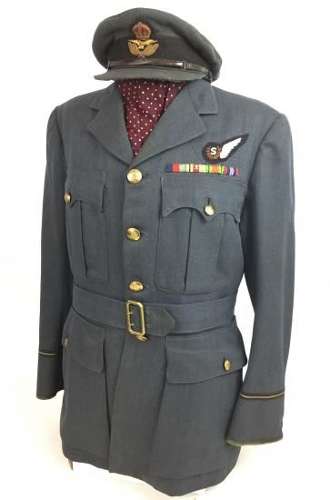 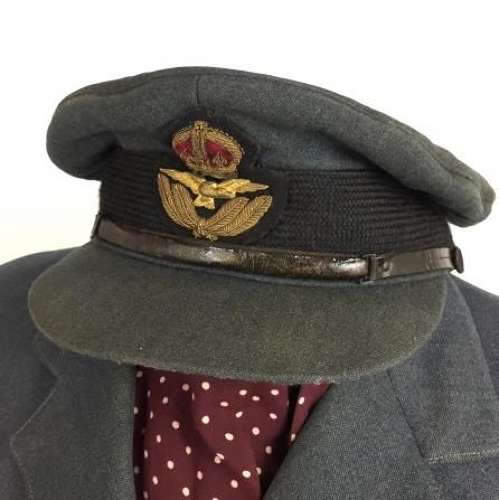 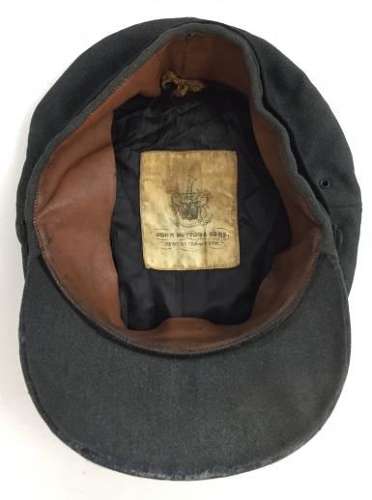 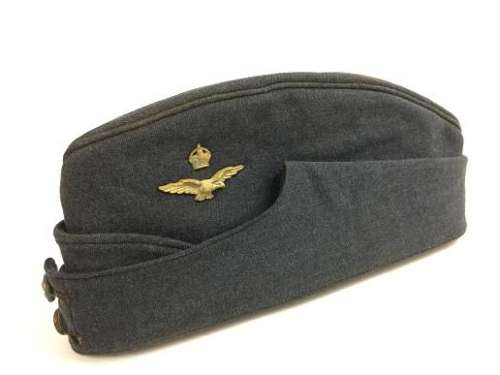 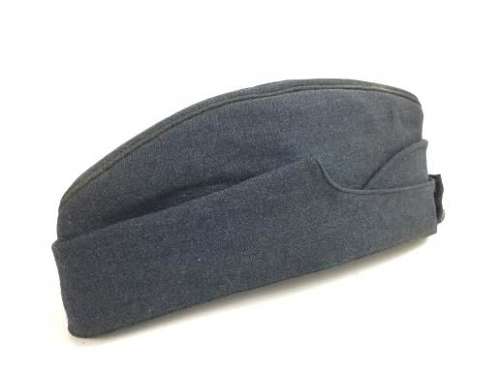 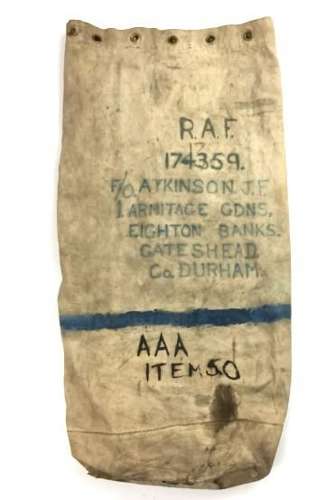 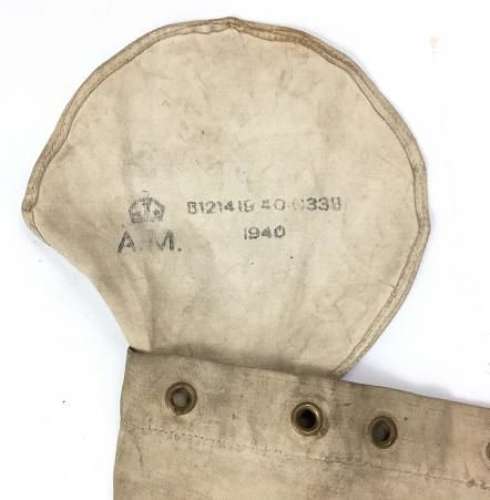 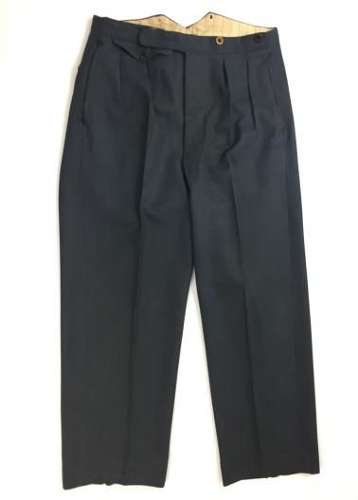 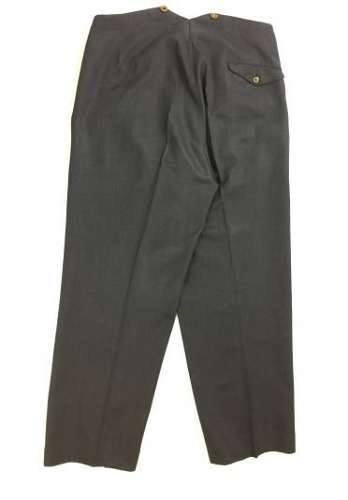 The Service Dress is a nice wartime example made by 'Isaac Walton' of London, York and Newcastle. The original Tailors label is present in the neck and features graphics typical of the time. There are no other labels with a date or similar but I would say the whole uniform is pre 1944 and certainly no later. The jacket is the standard wartime RAF pattern and features a signallers brevet above the left chest pocket and a set of medal ribbons below this which include the 39-45 Star, the Africa Star, The Defence Medal and The War Medal. This would suggest that he flew ops in the Mediterranean at some point during the war amongst other theatres. As well as this the jacket features Flying Officer rank on each sleeve and leather cuffs have been added which would suggest he served for a number of years and wore this jacket a lot.

The trousers are good examples and match the tunic well. They have an interesting cut and construction to the rear fishtail section which sets them apart from other examples and must have been a trait of this particular tailor. They feature one rear buttoning hip pocket, a large ticket pocket to the front, slash pockets to each hip and a reasonably wide cut leg as was the fashion at the time.

The cap is a nice mid-war example and is a true 'Ops' cap. It has been well worn and is shaped as was popular with aircrew who wanted to show that they were veteran flyers. The original chin strap is present as are both the buttons and a nice original kings crown cap badge can be found on the front of the cap. Inside the cap still has its original makers label which reads 'John Hutton & Sons, Newcastle on Tyne'. on the reverse side of the leather headband Atkinson has written his name in ink which nicely proves that the cap has always belonged to the tunic.

A side cap also forms part of the grouping and again clearly belonged to Atkinson as it has the last three numbers of his service number marked inside. On the whole it is a good example of a wartime side cap and is of standard construction and features two brass kings crown RAF buttons to the front and a brass Officers pattern brass Kings crown cap badge.

Also included is the kit bag which all the above described items were found in. To the front of the kit bag are Atkinson's details including his name, rank and number as well as his home address. Inside the bag is clearly dated 1940 and features the Air Ministry mark which is surmounted by a kings crown.

I have had all the uniform items professionally cleaned as they had been left in the kit bag since the end of the Second World War. They have come up well but all the items were clearly well worn at the time. The tunic is in good condition overall and displays well with only the slightly nick here and there. The trousers are slightly worse with some wear to the crotch etc but nothing that is very noticeable when worn or displayed. There is a slight amount of shininess to the fabric which comes from lots of wear. The peaked cap is good but as previously mentioned is well worn. There is some marking around the edge of the peak. The forage cap is nice and quite clean all round. the buttons and cap badge are tarnished and show some signs of oxidisation but these could easily be cleaned up. The kit bag is in average condition very much as they usually are.

All in all, a fantastic original Bomber Command uniform grouping, the like of which are coming up less and less. These items were all clearly worn by the same man during the war and have survived well. I have no documentation sadly but I have been promised some and if I do get it, I will of course forward it on to the next owner of this fantastic set. The only thing I do know is that the family said he flew on Wellingtons.

This would make a great addition to an RAF collection and makes a great display piece. It may also suit a re-enactor as the size is certainly a wearable one.

I have more photographs of this set which can supplied if requested.

Please note the scarf is for display purposes only and not included in the sale.