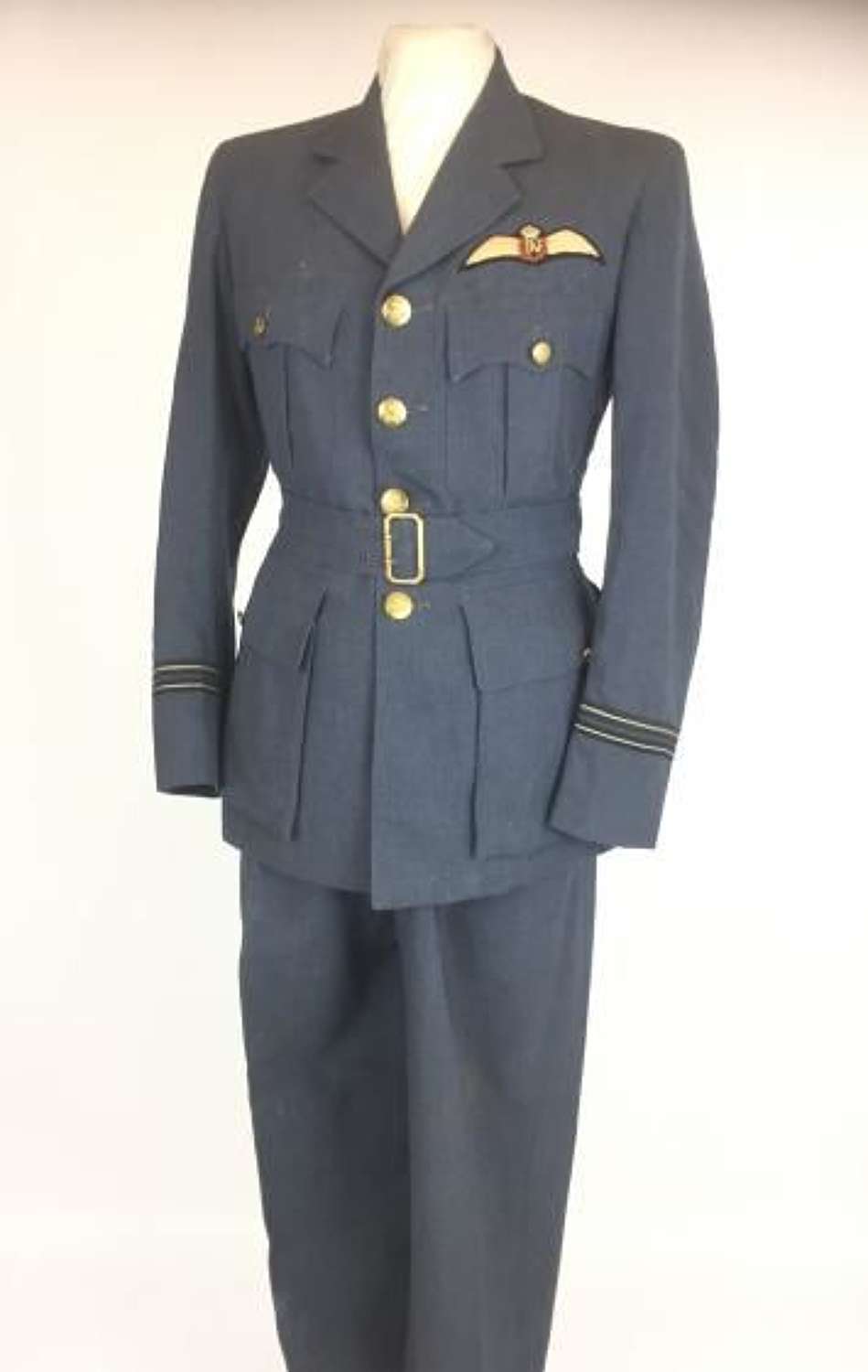 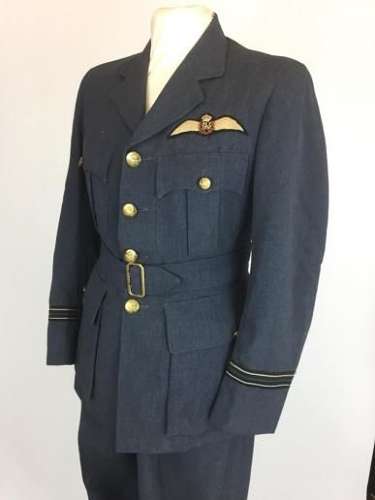 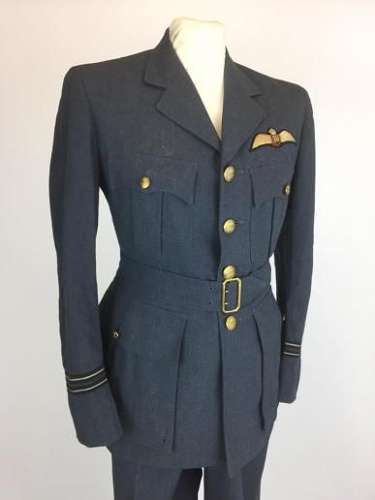 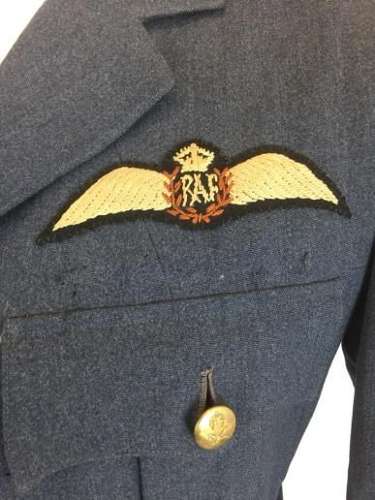 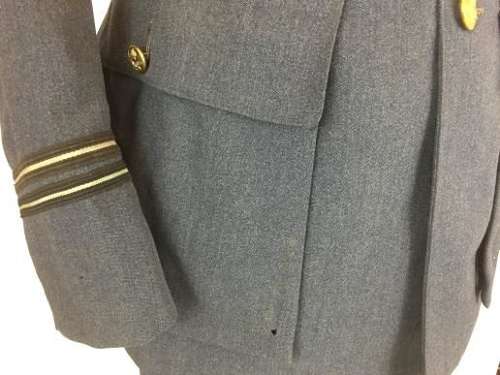 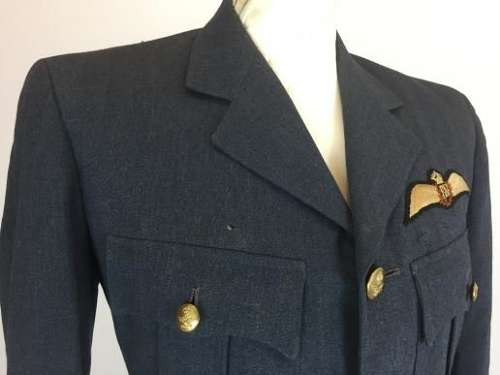 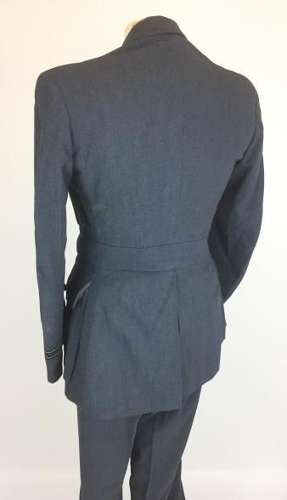 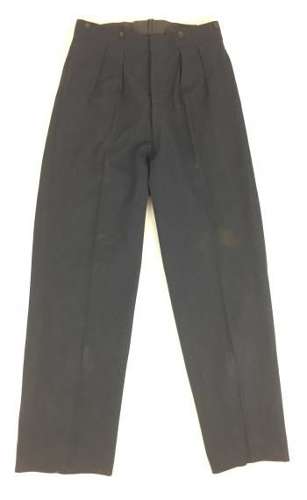 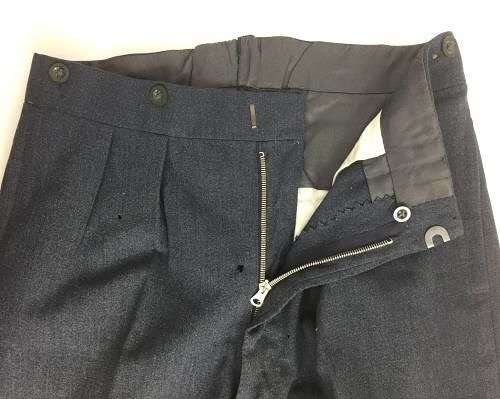 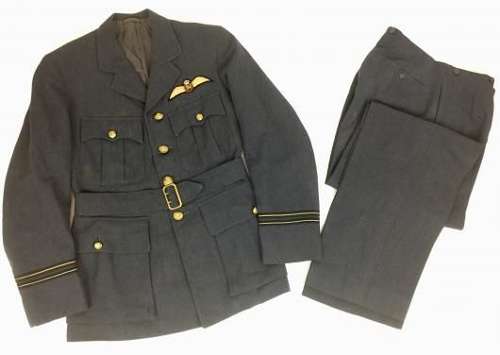 Flight Lieutenant Purkiss Started his RAF career in 1942 training at 56 OTU before being sent to 263 Squadron as a Sergeant on the 25th of February 1943 .He was promoted Flight Sergeant on the 13th of September of the same year and is mentioned numerous times throughout the Squadron operations book for that year as well as the following year.

In early 1944 Purkiss was promoted to Pilot Officer and was awarded the Distinguished Flying Cross on the 1st of August of the same year. He was then made up to Flight Lieutenant before being shot down on the 16th of August after his Typhoon was fit in the tail section by flak. Forced to bail out just north of Le Champeaux in France he was immediately captured and briefly interrogated. He was then held in the civil prison at Bernay before troops of the Household Cavalry liberated the town and sent him onto 30 Corps Headquarters.

The uniform itself is a good example of a wartime made RAF officers service dress and features a beautiful padded wing and two rank braids to each sleeve, denoting the rank of Flt/Lt. The trousers are interesting featuring a period 'Swift' zip and two rear pockets in the American style. Whilst uncommon, this is seen with wartime SD from time to time and suggests that the original owner was fashion-conscious and had a bit more money to spend on his uniform than some others.

Below the padded pilot wing is a clear area where a small number of medal ribbons have been removed, including the DFC.

The condition of the uniform is average for its age having clearly had heavy wartime use and now bares numerous stains related to this. There are also some moth holes to both the jacket and trousers which I have attempted to photograph as well as possible. None of this is terrible however and the uniform still displays exceptionally well. It wouldn't be impossible to have it dry cleaned and invisibly repaired if you so wished to make it really nice.

Sadly there is nothing inside the uniform such as a name tag to directly tie it to Purkiss but it did come from a house clearance which included a number of his wartime items.

The history of the uniform is incredible, but just a stand alone wartime tunic and trousers it still oozes character. It would undoubtedly compliment any RAF collection and would also suit a taller re-enactor.