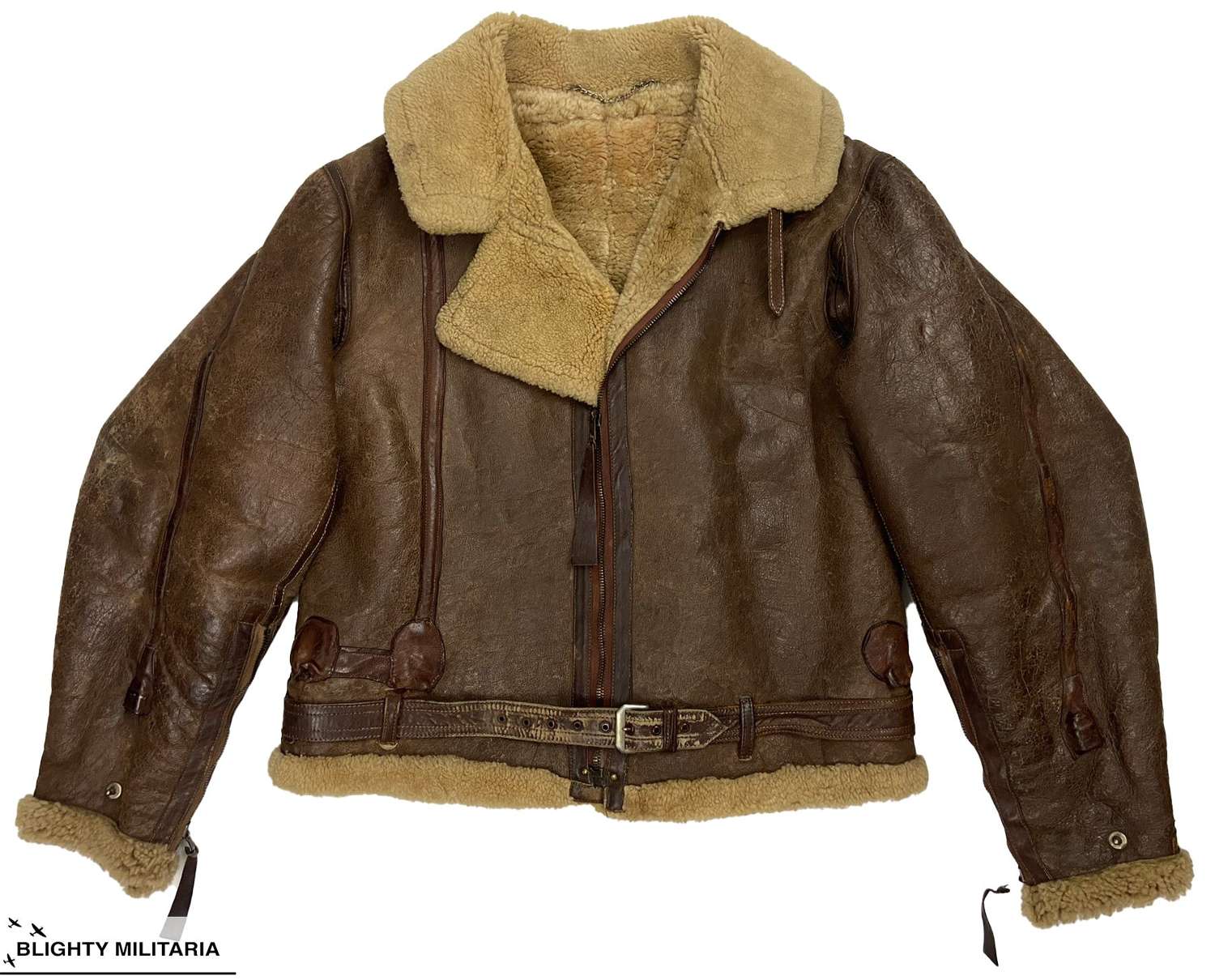 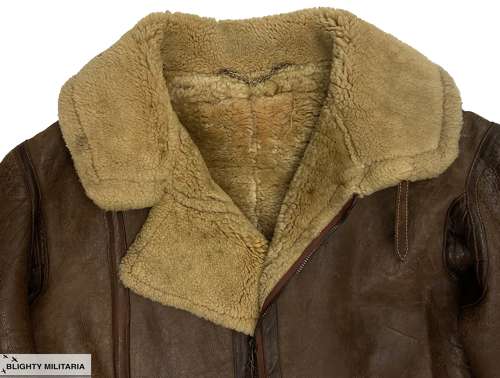 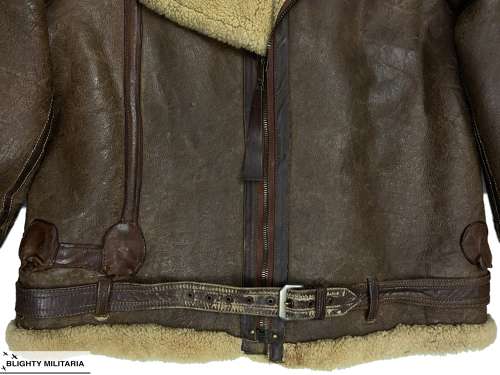 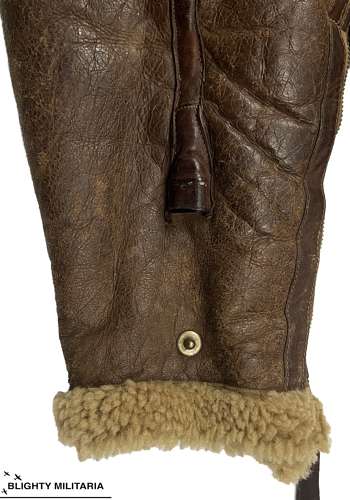 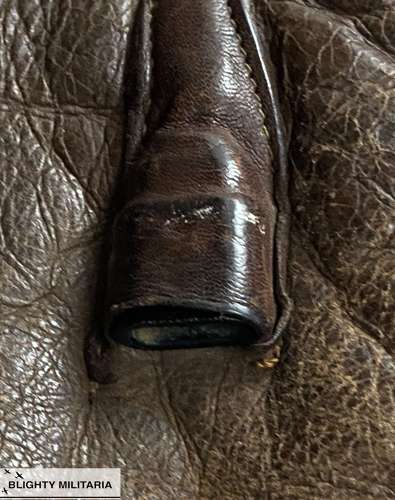 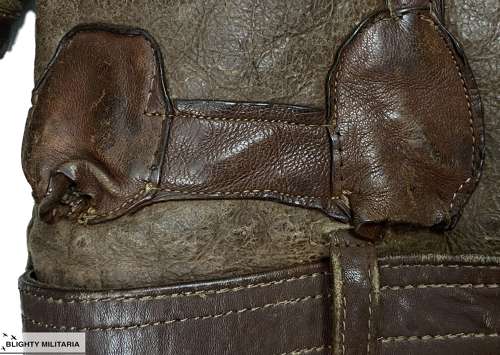 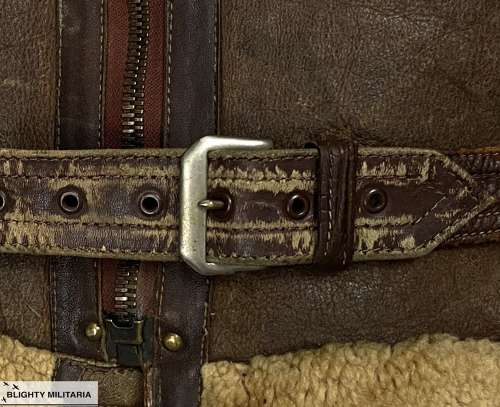 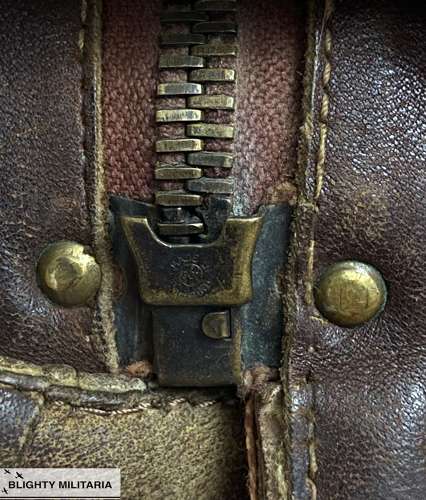 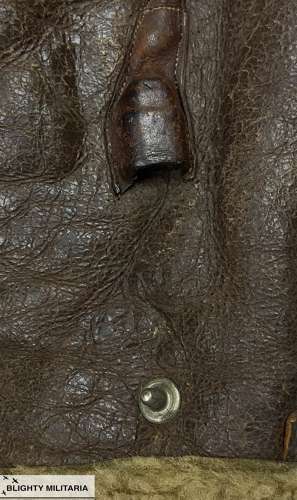 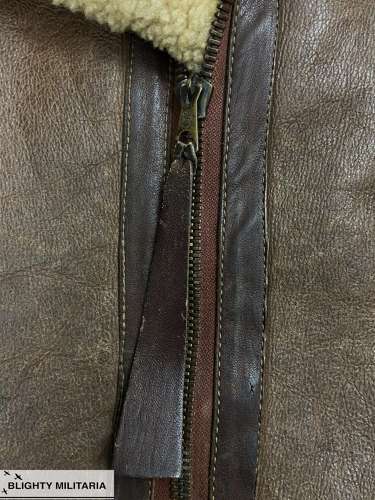 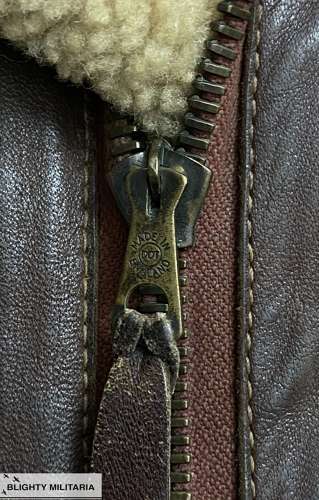 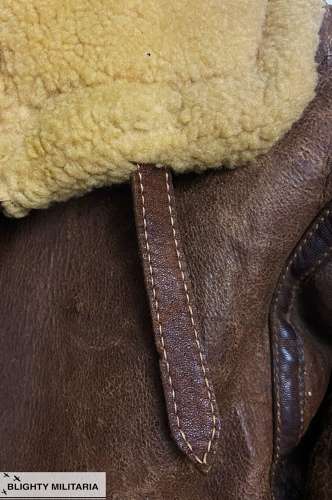 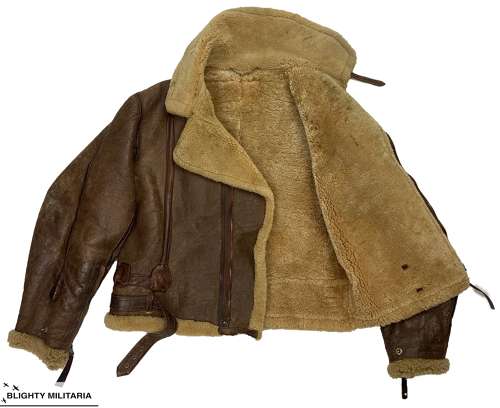 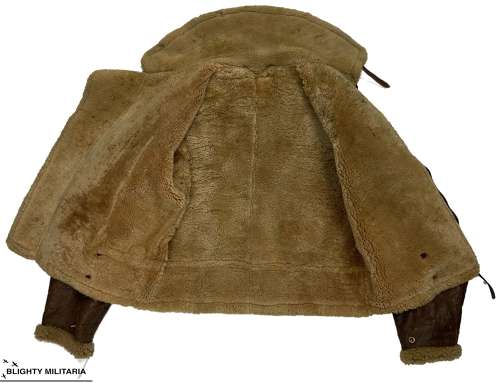 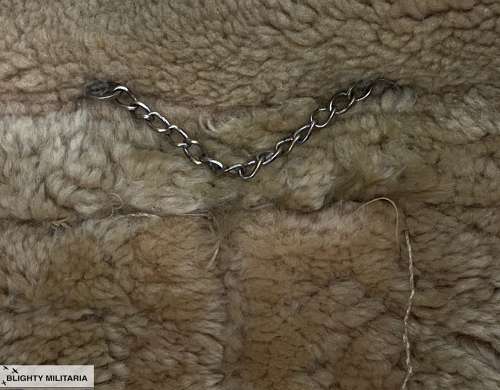 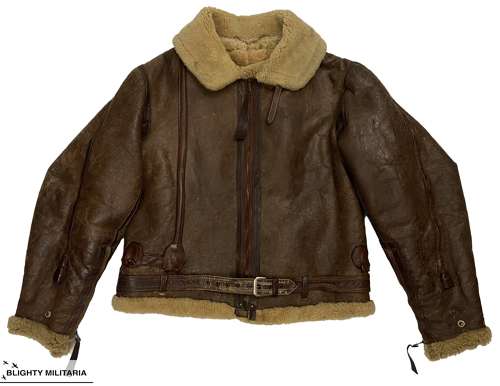 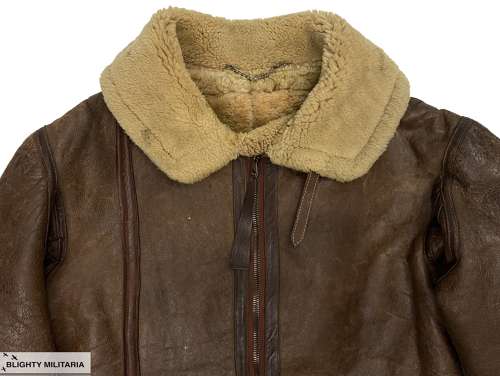 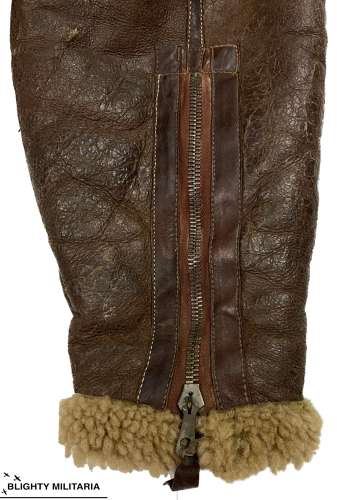 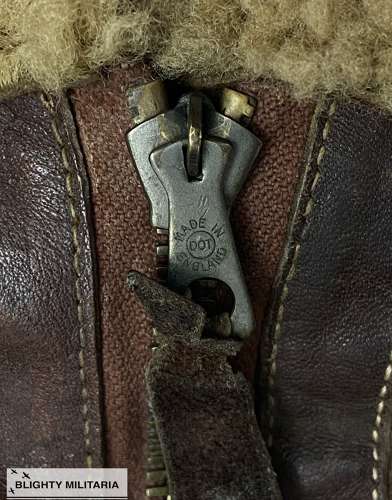 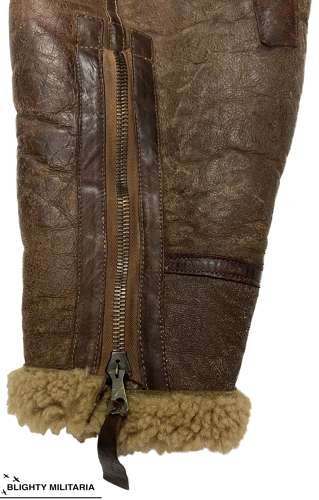 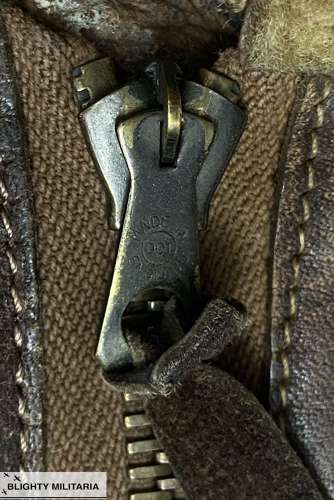 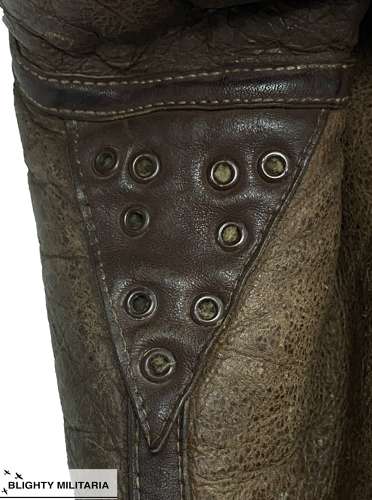 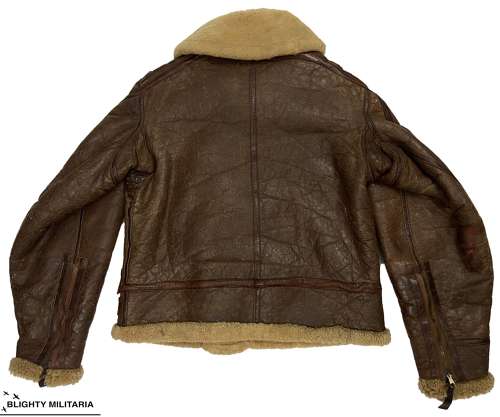 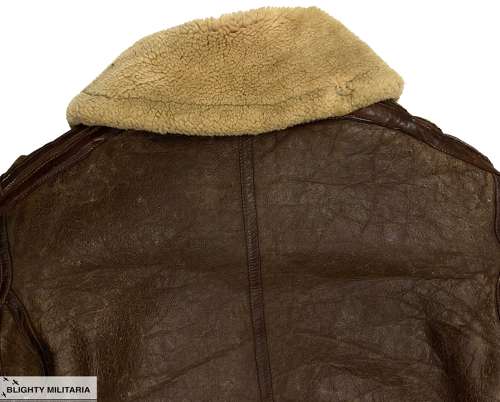 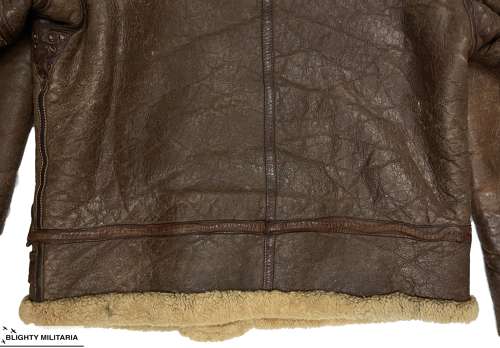 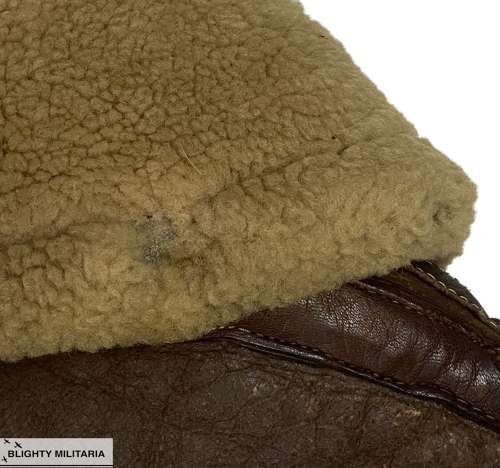 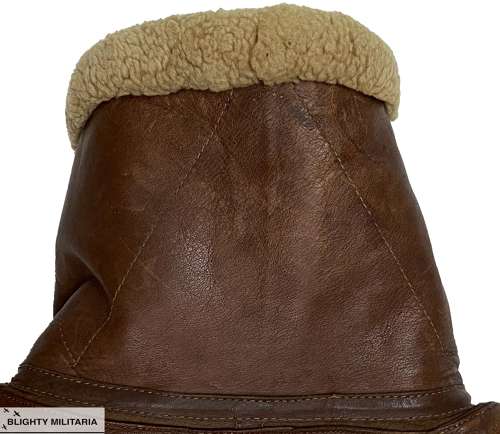 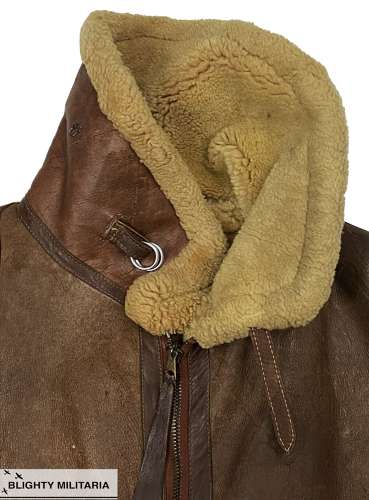 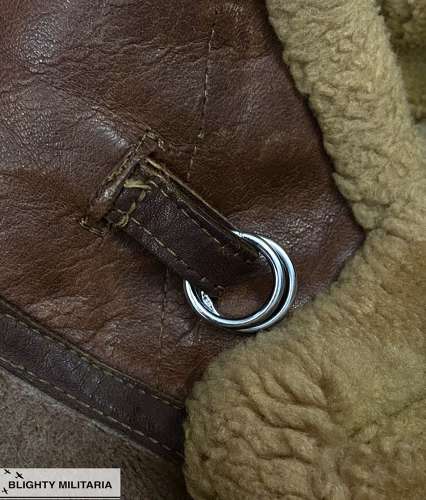 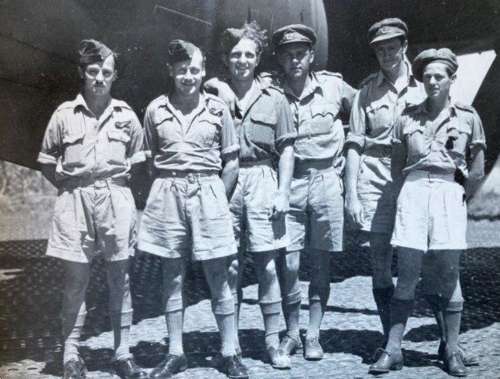 A lovely original early Second World War wired Irvin flying jacket which belonged to 207335 Harold Douglas Moseley AFC he flew with the South African Air Force during WW2. He was awarded the Air Force Cross along with the Afrika Diens Medalje. The last picture in black and white shows him as the tallest man, standing in the centre with a side cap on, with other members of his crew around him.

Officially designated 'Electrically Wired Thermally Insulated Flying Suit, Jacket', this pattern of jacket was produced in the early part of WW2 and was intended to be worn with the R.A.E heated gloves and a matching set of trousers. Wiring runs through leather channels and there are sockets at the end of these on the sleeves to which the gloves plug in. Two umbilical cord connectors would have originally been fitted but have been removed at some stage, almost certainly by the original owner. It is qiute possible he wore the jacket with Bomber Command in the early part of the war before being posted overseas and decided to remove the umbilical cords as there was no need for heated clothing. They have been removed carefully and all the wiring is still intact inside the channels meaning it would be possible to put the jacket back to original, if so desired.

The jacket features a single panel fronts and a single seam to the rear, denoting it as an early manufactured example. All the original D.O.T branded zippers are present and work well, with all retaining their original leather pull tabs. The leather exterior is in very good condition and retains the vast majority of its chromed leather finish. It is soft and pliable with some small nicks and areas of wear which are all visible in the pictures. All the seams are strong with no loss of stitching or similar . There is a near L-shaped patch to the inside of the right hand sleeve and another which runs from the shoulder seam down the arm - both of which are clearly original period repairs.   The waist belt is present and the buckle retains a good amount of its plated finish. To the underside of the collar the metal collar strap rings are bright and clean and to the rear both the eyelets which the elastic collar strap are fitted to, are present.

The sheepskin is a lovely bright blonde colour at the collar and slightly darker at the cuffs and waist. There are only limited signs of wear and age which gives the jacket a very fresh appearance. There is some minor staining to the interior as well as the collar. The collar also has a couple of small flaws to the sheepskin which are detailed in the pictures. The metal hanging chain is still present and there is evidence of where the original label was originally fitted.

The jacket is a larger size and will suit around a 42" - 44" chest depending on desired fit. When laid flat it measures -

Overall the jacket displays very well indeed. It looks to be totally wearable and has been thoroughly checked over. It does have a few small flaws which have been listed above but overall it is a very good jacket.

A very nice original Irvin jacket complete with some wartime history and the opportunity of further research.