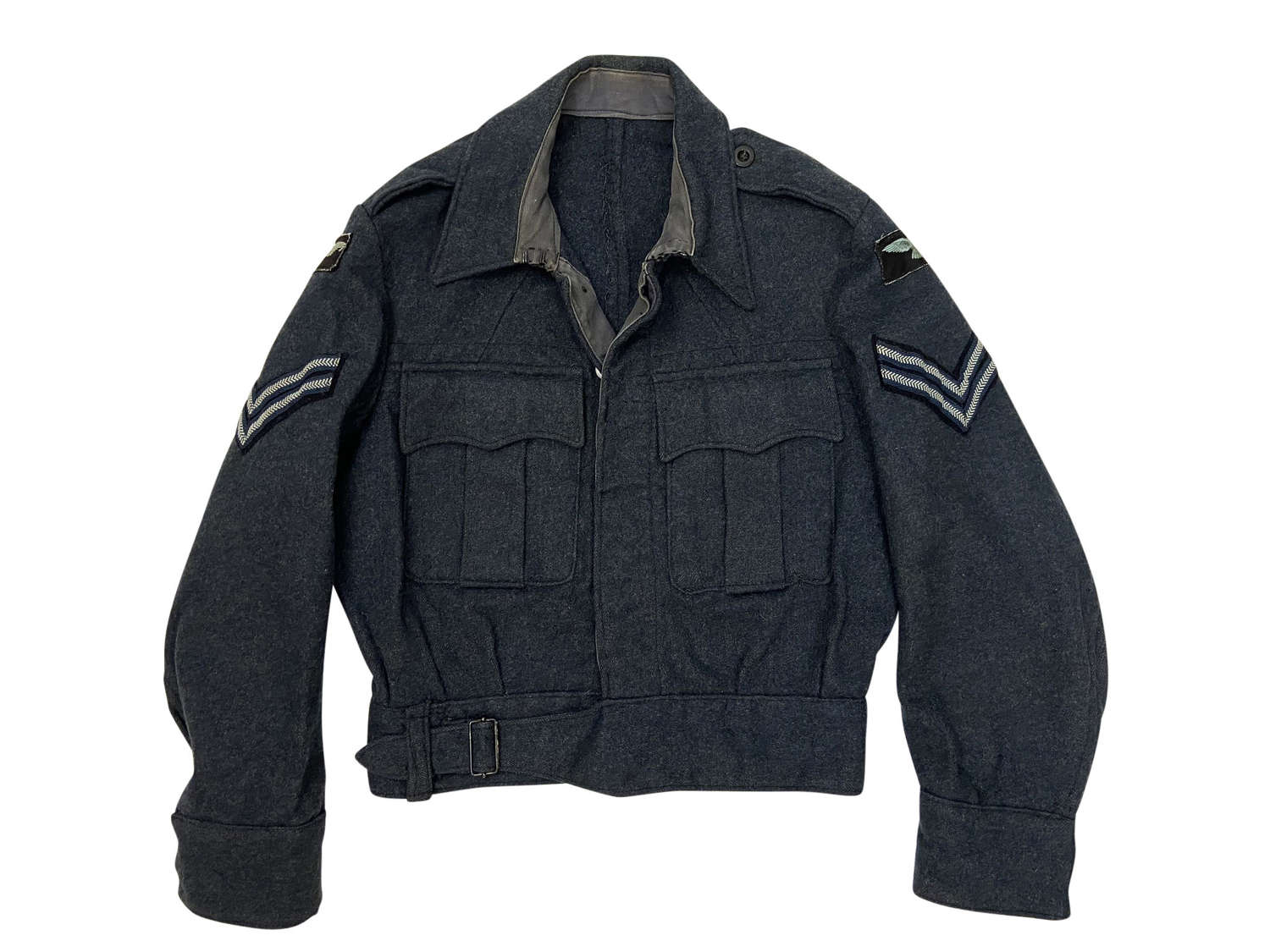 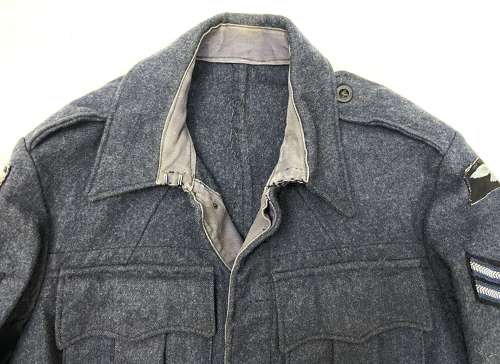 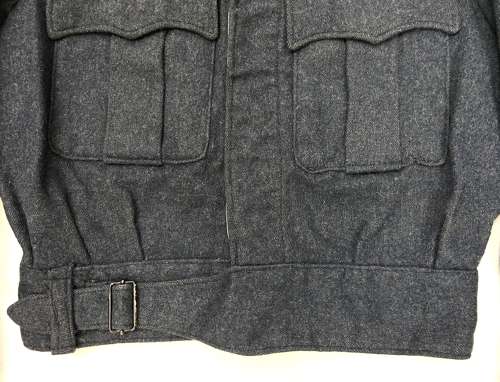 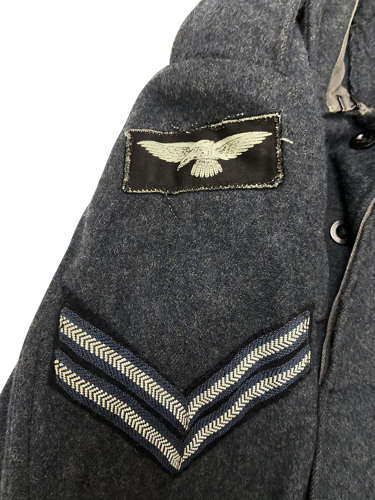 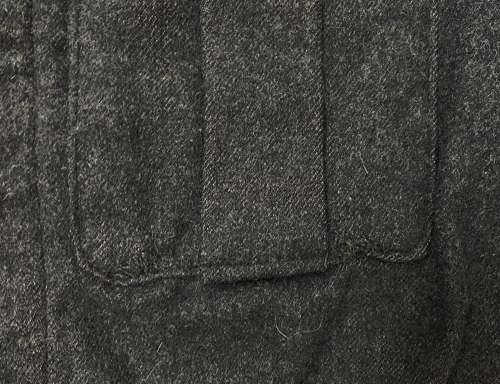 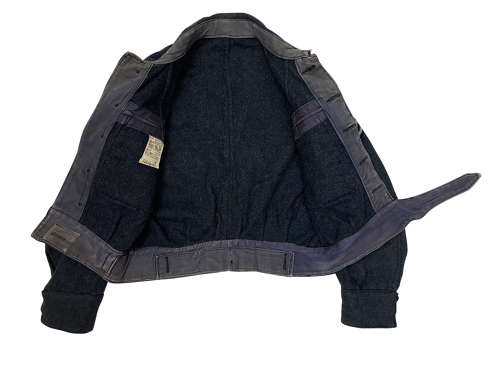 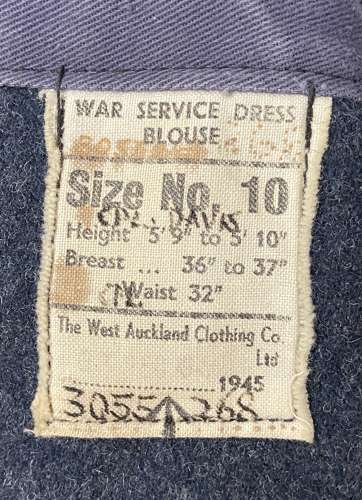 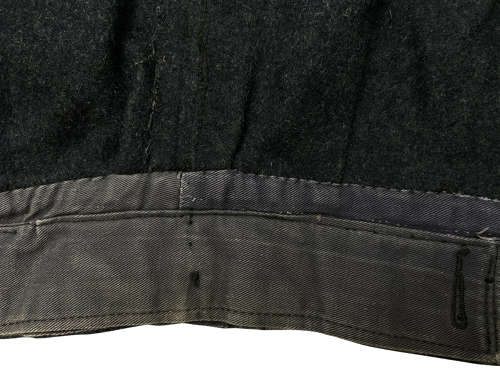 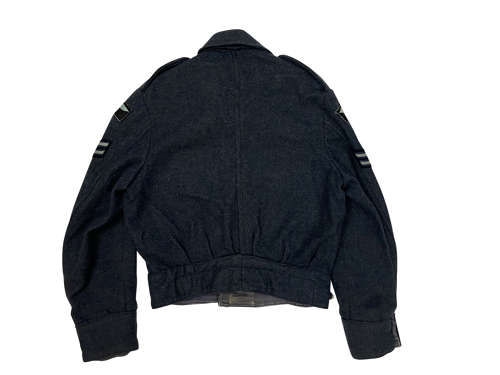 An original Royal Air Force War Service Dress Blouse made in 1945 and featuring its original insignia.

This pattern of jacket came into service in late 1940 listed as 'Suits, Aircrew' before being re-designated 'War Service Dress' in 1943, remaining virtually unchanged. The blouse features the wire style waist buckle usually associated with early manufacture 'Suits, Aircrew' blouses, RAF style scalloped pocket flaps and a pair of hook and eyes to close the neck. Standard RAF Black horn buttons are fitted to the jacket.

The jacket comes complete with a set of wartime economy printed eagle badges fitted to the top of each sleeve. and original RAF corporal stripes fitted lower down.

Inside the jacket the original label is present and is still bright and legible. It states the size of the jacket as 10 The manufacturers name is 'The West Auckland Clothing Company Co Ltd' below which is the 1945 date and the War Department broad arrow marking.

The original owner has marked his name in ink to the label and reads 'Cpl Davis' which ties in nicely with the insignia. It also appears to have his service number which reads 3055268 also marked in ink.

Whilst the jacket is marked as a size 10 it has been altered with the sleeves being shortened with a 17" inside arm and some work also carried out to the waist which measures 15 1/2" when laid flat.

The jacket is in nice condition as can be seen in the pictures. It has been worn and washed but generally presents well. It has a small repair to the bottom of the left breast pocket as shown in the pictures and some period alterations. It is a vintage jacket that is 75 years of course, so may have very small issues consummate with age.

A nice and very original example of a wartime RAF WSD Blouse which displays exceptionally well. This would make a fine addition to any RAF collection.