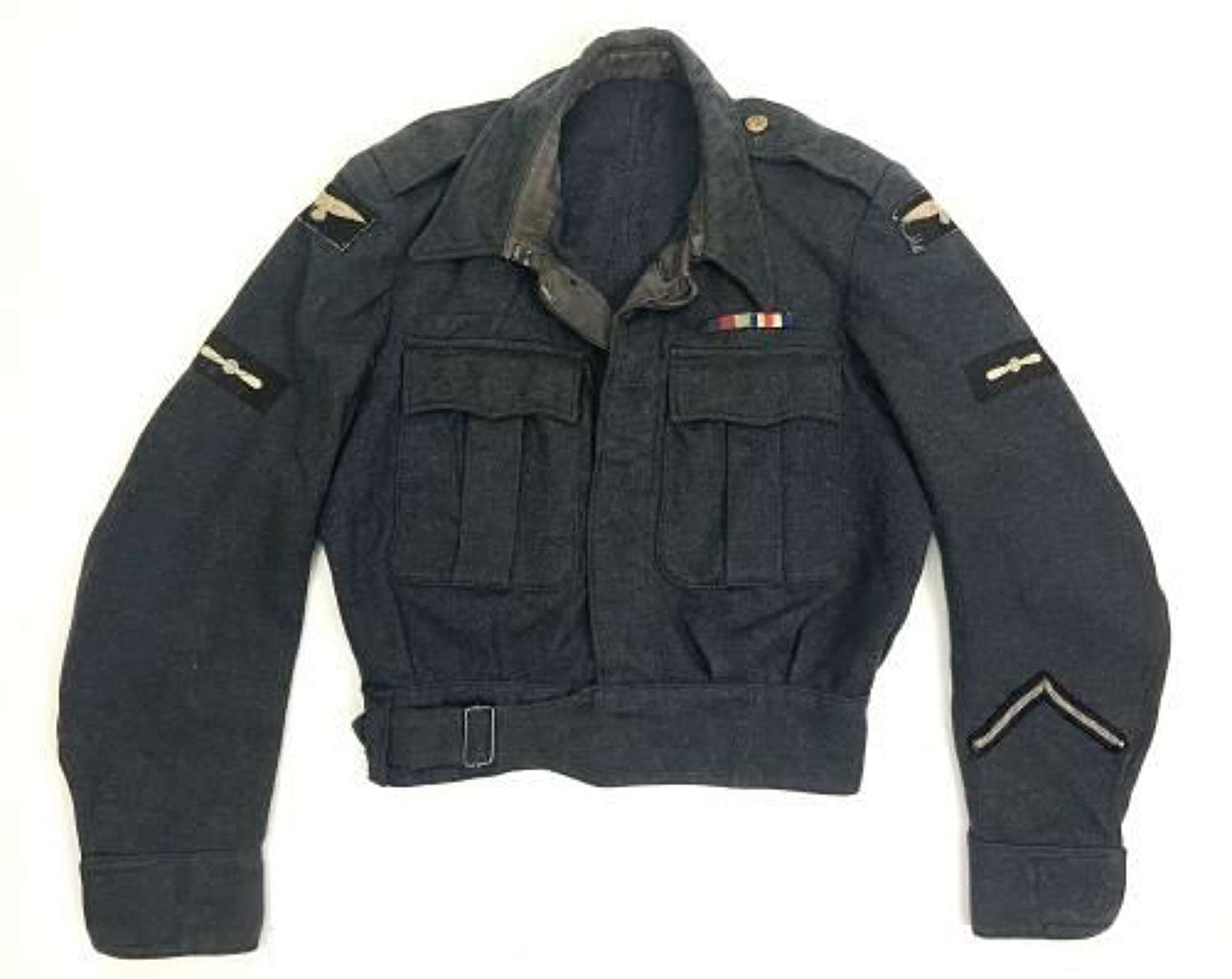 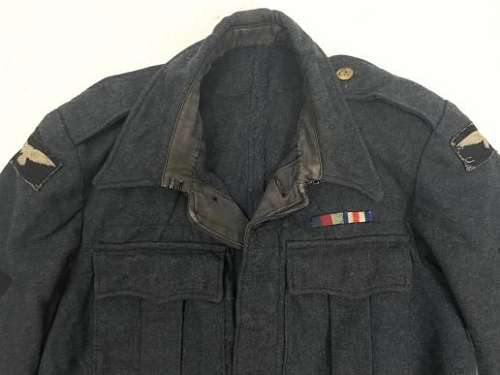 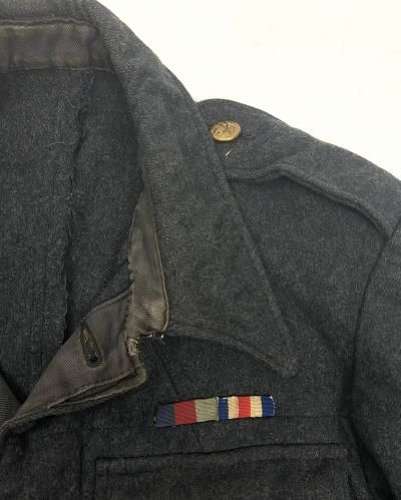 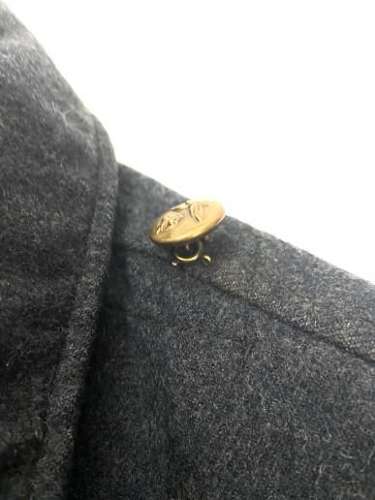 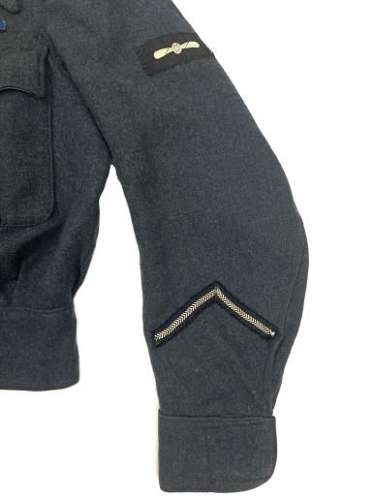 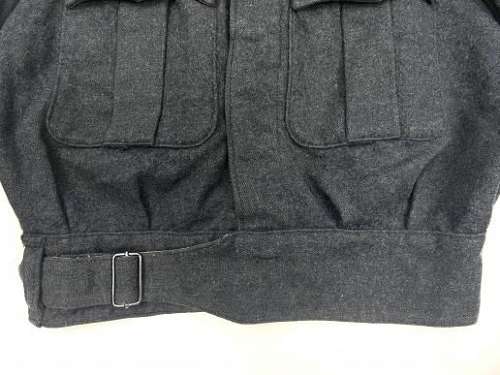 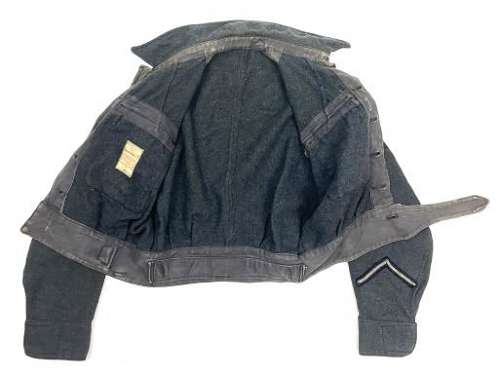 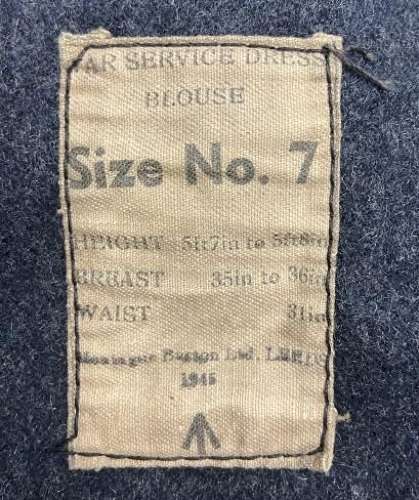 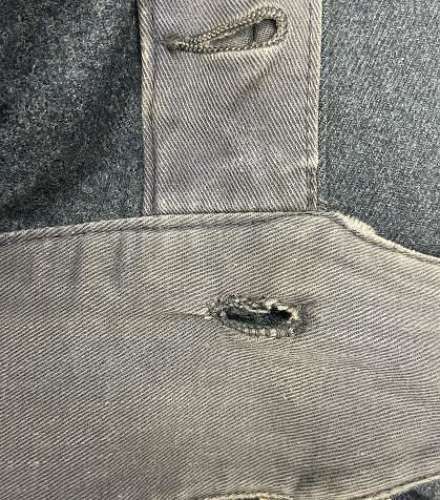 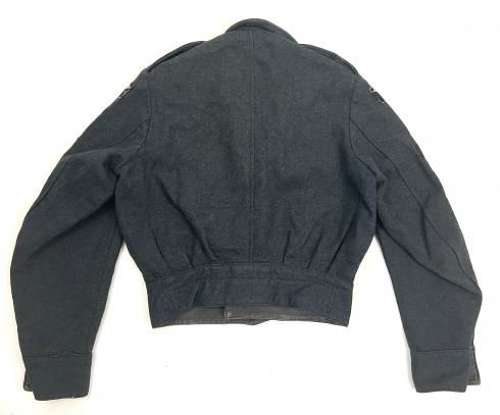 This pattern of jacket came into service in late 1940 listed as 'Suits, Aircrew' before being re-designated 'War Service Dress' in 1943, remaining virtually unchanged. The blouse features the wire style waist buckle usually associated with early manufacture 'Suits, Aircrew' blouses, RAF style scalloped pocket flaps and a pair of hook and eyes to close the neck.

What is particularly nice about this blouse is the addition of brass RAF buttons to the epaulettes. Interestingly one of them features a hook from a chain hidden out of sight which suggests something was attached to it originally. The jacket has also been tailored with darts added from the collar across the chest which is common to find on original tunics such as this. Another small alteration comes in the way of an extra button added to the bottom of the two which close the front of the jacket. it fastens through a hole cut into the lining of the belt which has been crudely handstitched to form a button hole which is again typical of personal alterations and helps add another layer of authenticity to the jacket.

The jacket is fitted with wartime economy printed eagle badges to the top of each sleeve with LAC badges of the same construction found lower down the sleeve. The bottom of the left sleeve features a good conduct stripe whilst the chest bears two medal ribbons; namely the 39-45 Star and the France and Germany Star. The addition of the France and Germany Star means the original owner almost certainly served in the Second Tactical Air Force.

Inside the jacket the original label is still present and is clear and legible. It states the size as No.7 and the maker as 'Montague Burton LTD Leeds'. The 1945 date is present below this as is the War Department broad arrow marking.

The blouse is in good condition and displays well. It has plenty of honest service wear and was clearly worn for sometime before the medal ribbons were fitted at the end of the war.

This is a very original blouse which was clearly worn during the last years of the war and has not seen the light of day since the end of hostilities. It would make an excellent addition to any RAF collection without a doubt.