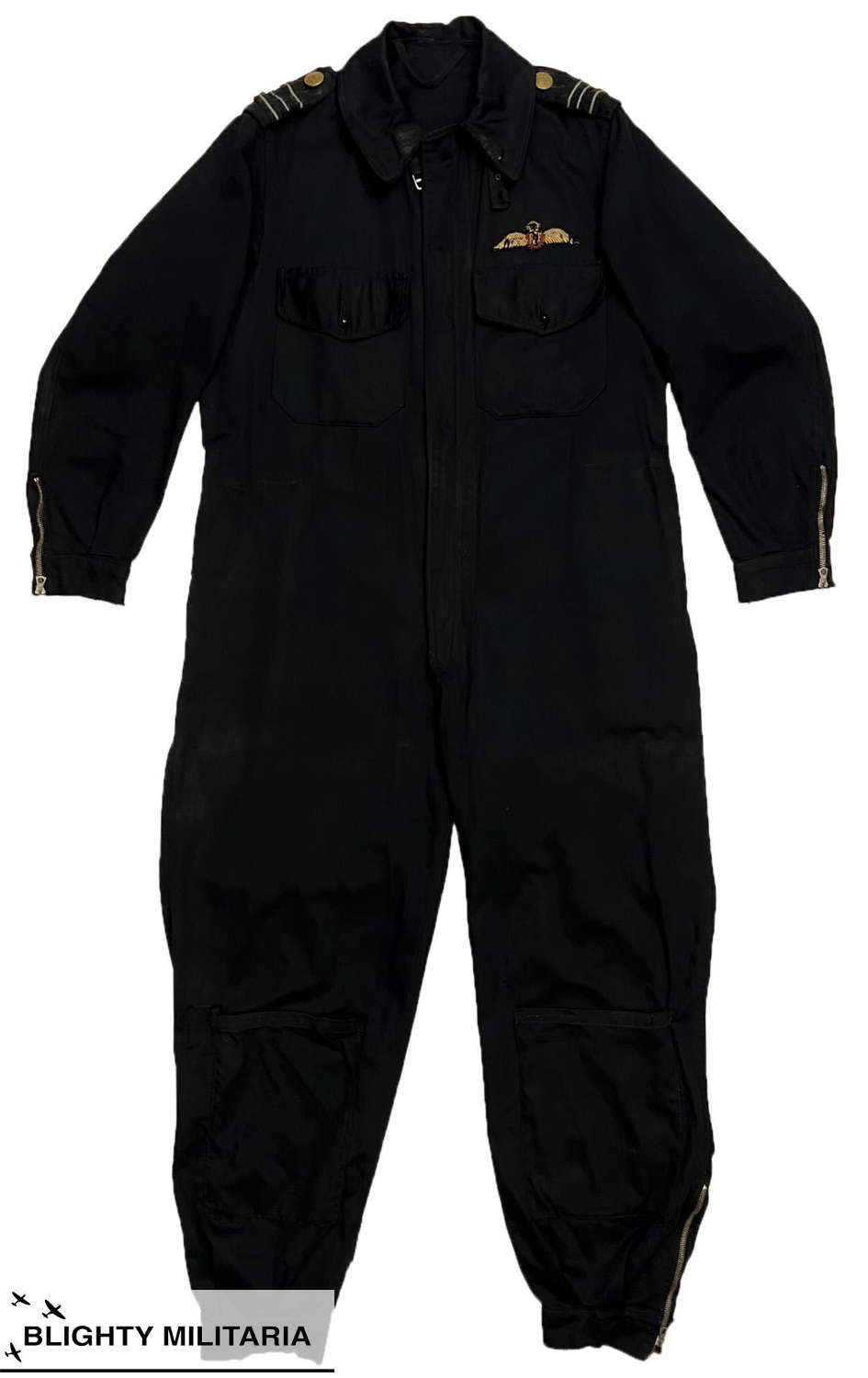 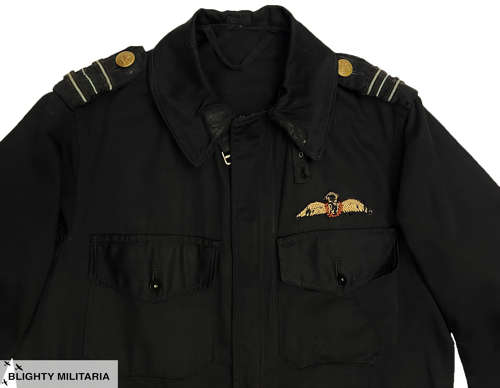 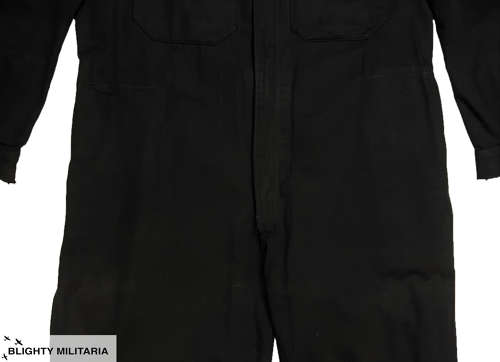 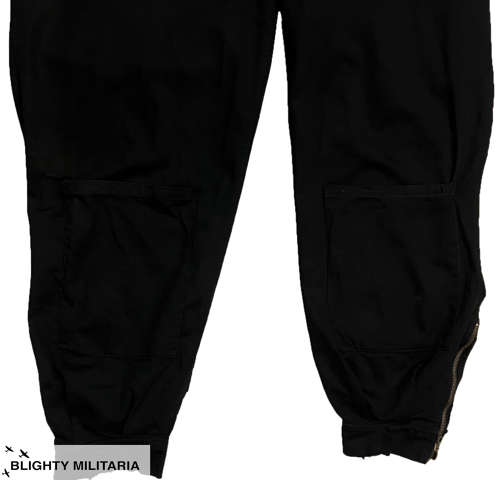 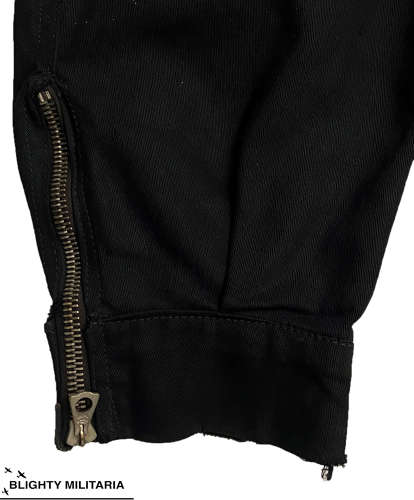 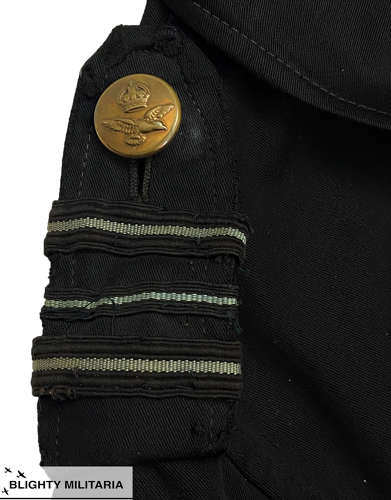 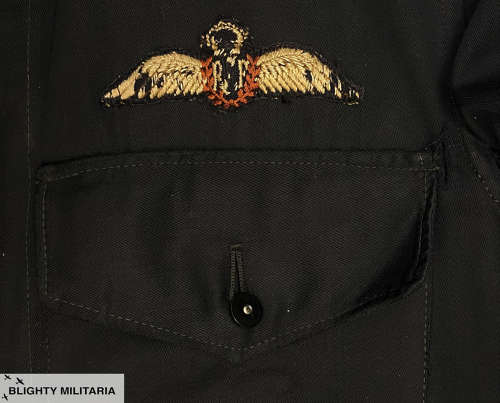 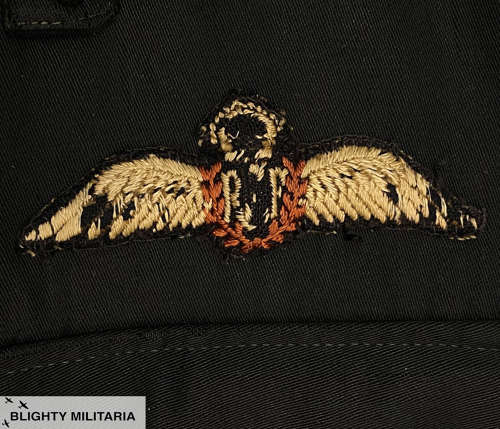 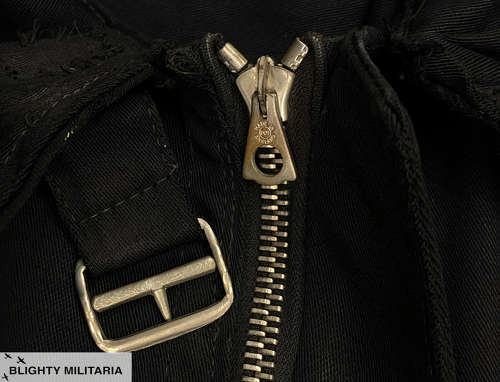 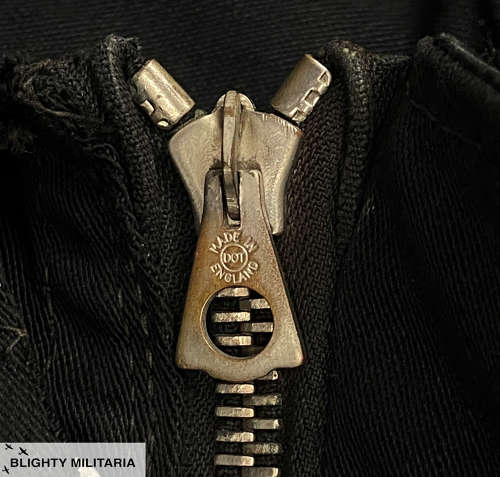 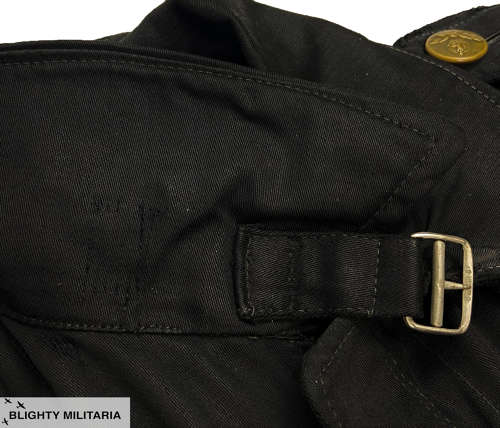 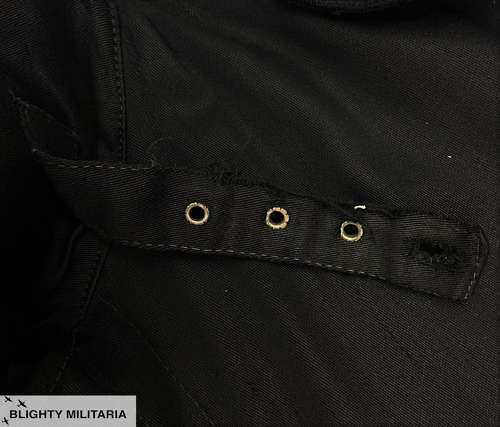 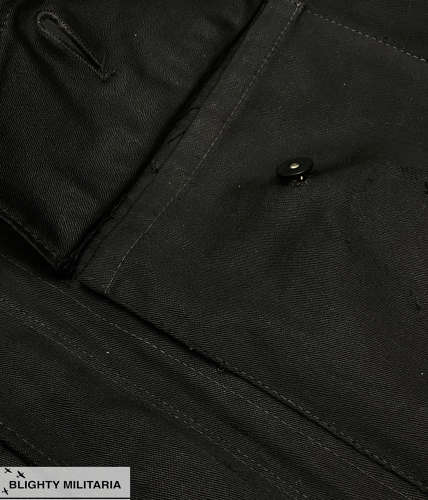 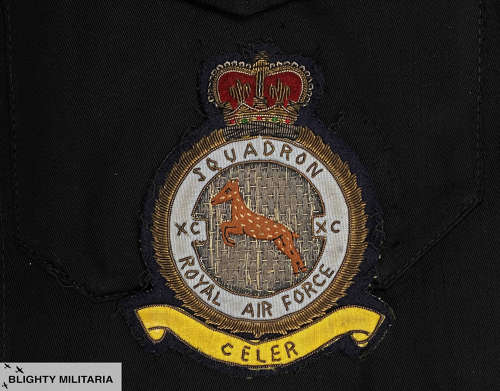 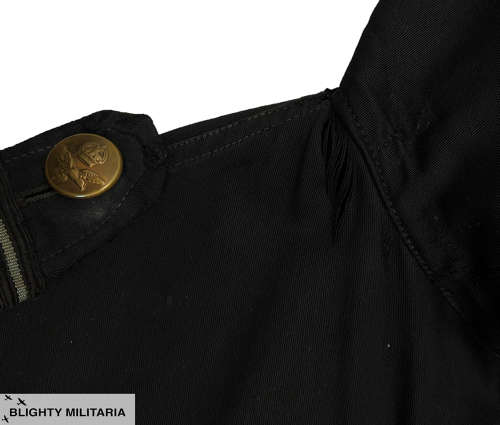 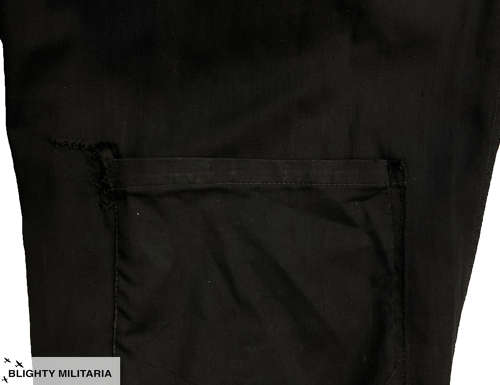 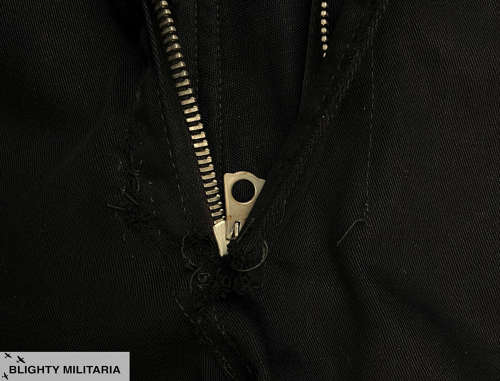 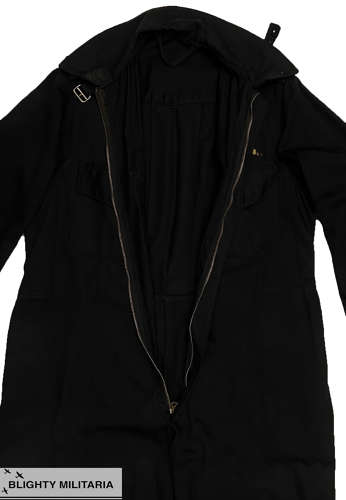 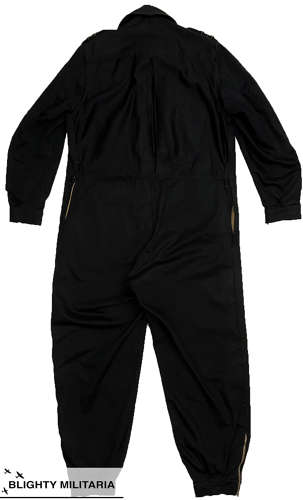 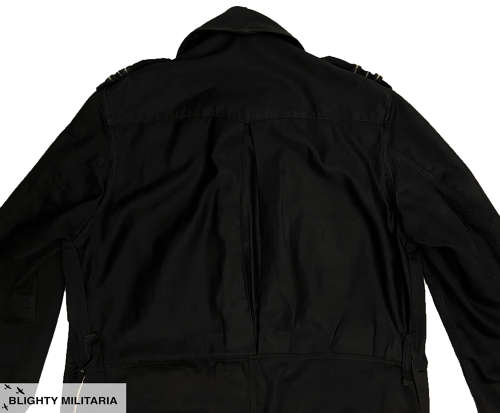 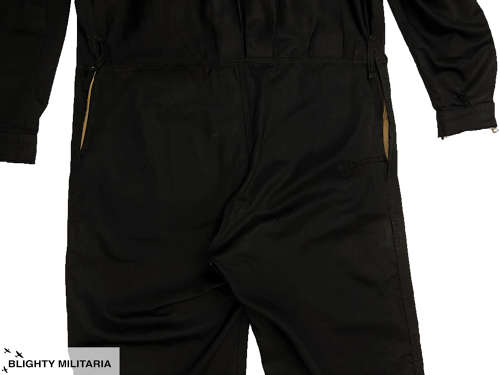 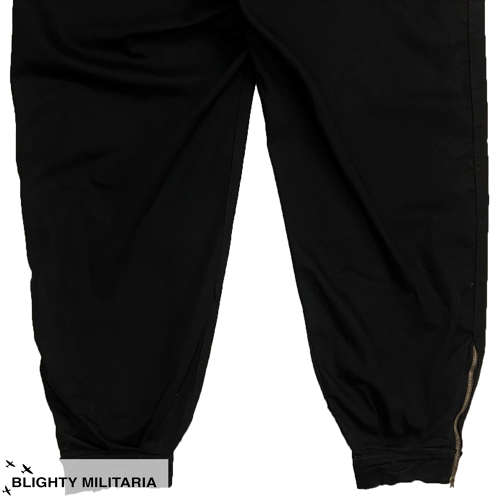 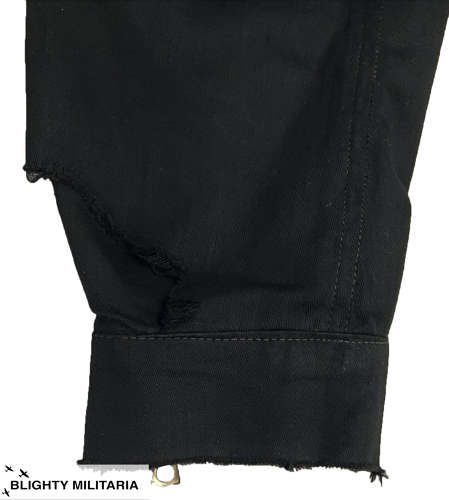 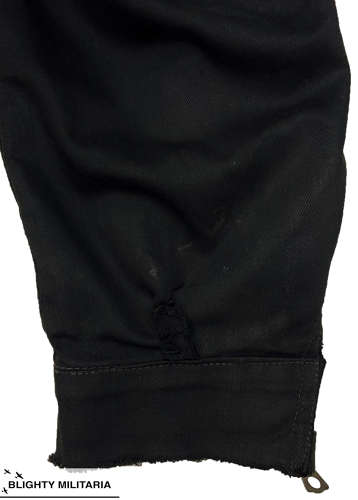 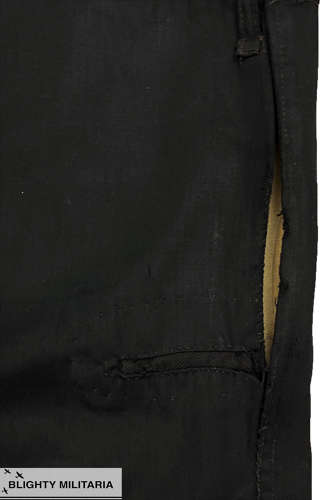 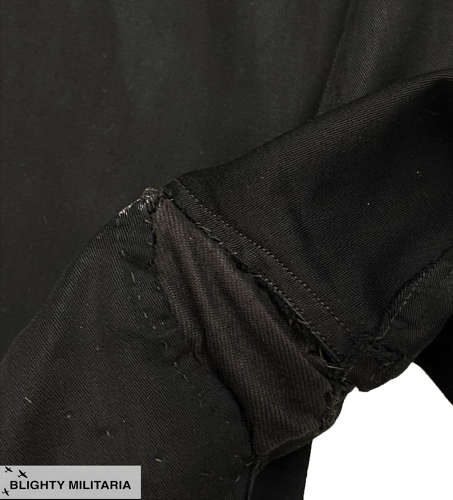 The prestige suit has to be one of the rarest and most classic pieces of RAF flying clothing from the Second World War. Synonymous with pilots of the Battle of Britain, this is a truly iconic piece of clothing.

White prestige suits were a common sight during the 1930s as well as in the early stages of the Second World. The black prestige suit however is arguably a much rarer beast; although arguably as commonplace during the early part of the war and in the Battle of Britain. Many pilots at the beginning of the war opted to have a black flying overall, rather than the white - possibly because they were more associated with pre-war flyers.  Hubert Raymond 'Dizzy' Allen wrote in his book that he bought a black prestige suit as he felt it was more in-keeping with the mood in 1940. There are many photographs showing black prestige suits in use during the Battle of Britain. They are very seldom seen after this period however.

This example is devoid of any labels or stamps but is nonetheless a very close match to the suit worn by Gordon Sinclair whilst flying Spitfires with 19 Squadron in 1940. Both the pocket shape and the removable, small size revolving shank buttons are an exact match and may give further insight into the origins of its manufacture.

There is no name or history with the suit, although it was clearly owned by a pilot who held the rank of Squadron leader, at least in its last iteration. The suit was clearly used for many years which is borne out by the amount of wear and evident use.

The suit is fitted with high quality 'DOT' branded zippers throughout - all of which function perfectly. The zip pullers are a typical 1930s shape which were used by makers such as 'Harrods' and date the suit to the late 1930s or very early 1940s. They are the clearest indicator to date as they were not manufactured any later than this. The suit also features a typical large collar which is a typical feature of prestige suits from this period. A buckle and tab are located on the underside and are again typical. Interestingly the side with the buckle has been repositioned to allow for more room. This may correspond with the last eyelet of the tab being absent and worn suggesting it was a personal preference by the owner to wear the collar fastened around his neck - possibly with a scarf underneath?

Epaulettes are fitted to the shoulders and are fastened with brass, king's crown RAF buttons/ Squadron leader insignia has been added in a rough manner which is in keeping with the fact that it is essentially a workwear item. As well as this a padded, king's crown pilot's wing is fitted to the chest. It is very worn which is in keeping with the suit and is no doubt original to the suit, as is the rank insignia. The wear is not only consistent with the rank insignia but it is worn where the parachute harness or sutton harness would rub the most.

A squadron badge has previously been fitted to the left breast pocket and there is evidence of where it has been removed. It is a post-1953 example which again is consistent with the heavy wear. There is no doubt that the original owner wore this suit for many years. In the post-war years it may have marked him out as a veteran. The badge is a bullion example which is maker marked to the rear. It is a No. 90 Squadron, or XC squadron, badge and bears the moto 'Celer' which is latin for swift. Whilst the badge has been removed it is kept with the suit for prosperity.

On the whole, the suit is a typical example of an early war prestige suit. Some details including the zips have already been mentioned and date the suit quite definitely. It is made from a black cotton and features flapped breasted and map pockets to the legs. Belt loops are present to the waist although the waist belt is no longer present. Both the ankles and sleeves are cuffed and fasten with zips. It is a textbook example.

The suit is in very well worn condition which ties in well with the date of manufacture and the later breast badge. The cotton material is shiny from wear and there are some areas where the material has split including under the collar and by the left breast pocket. There are also numerous period repairs which are testament to the long period the suit was used for as well as other holes and rips. I have included pictures of these areas to the best of my ability and it is important to note that the suit is far from perfect. Nonetheless it does display very well and the condition adds to the overall effect without a doubt.

This is an extremely rare piece of Battle of Britain flying clothing which would undoubtedly make a fantastic addition to any collection. It was clearly owned by a pilot who had a long career in the RAF and it is truly a pleasure to be able to be in possession of this incredible piece of history.