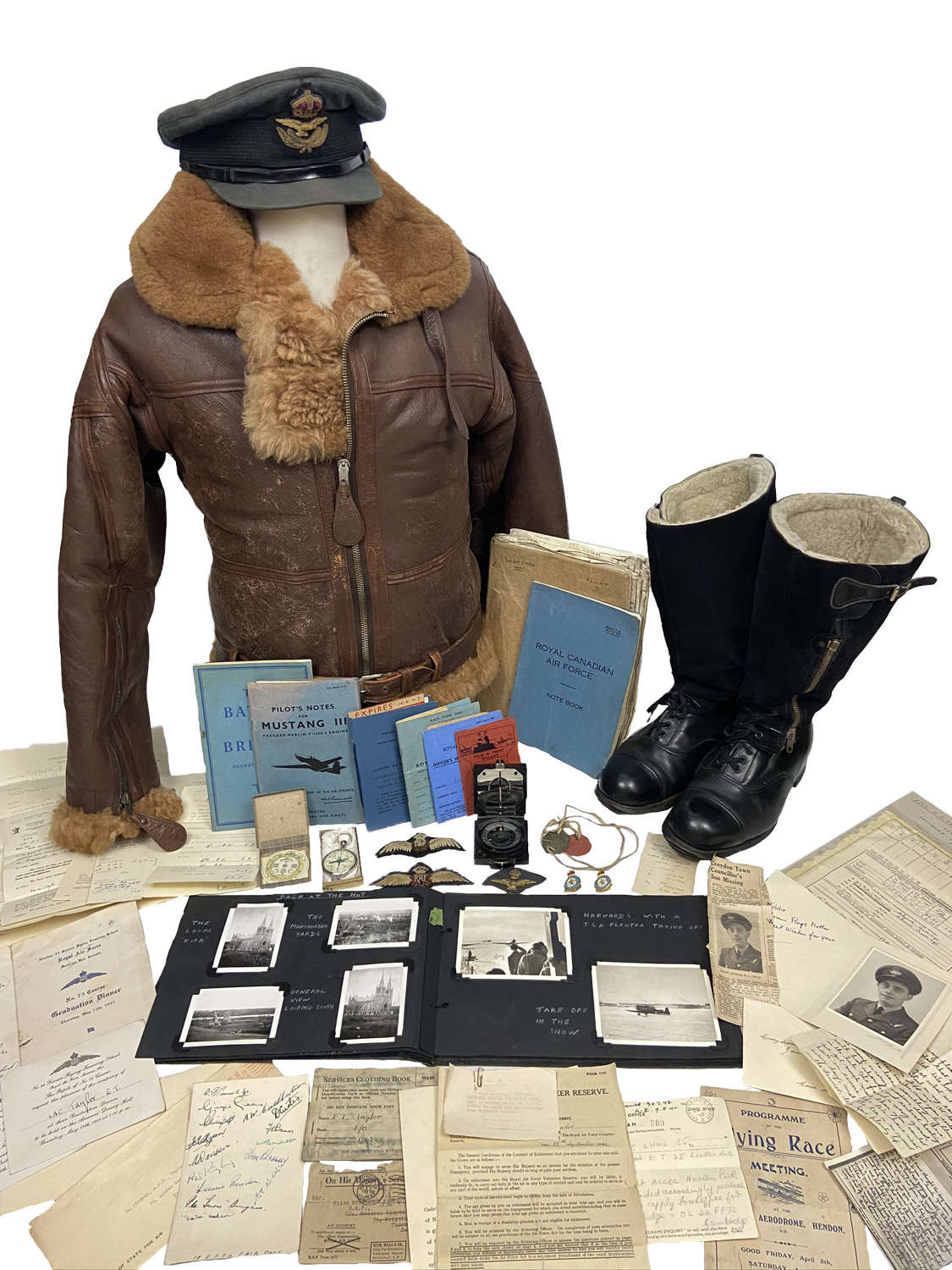 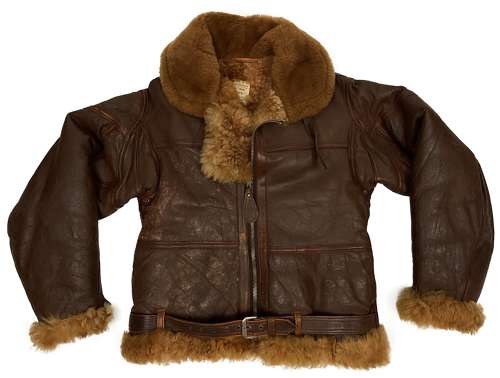 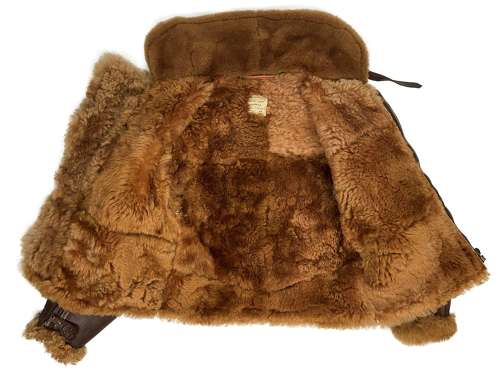 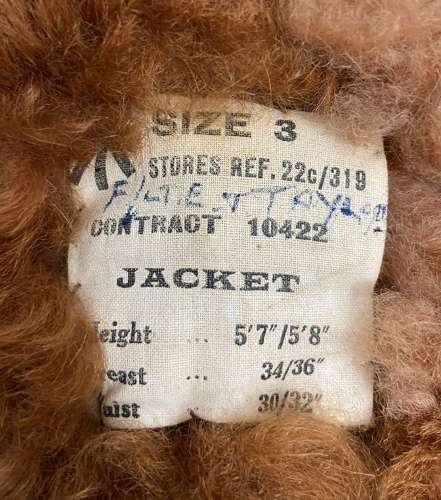 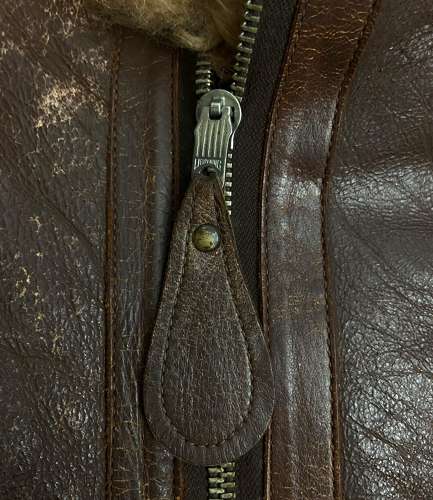 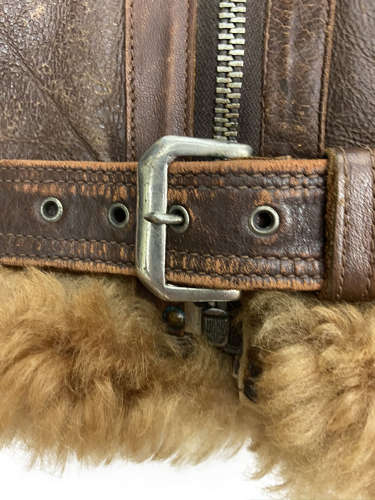 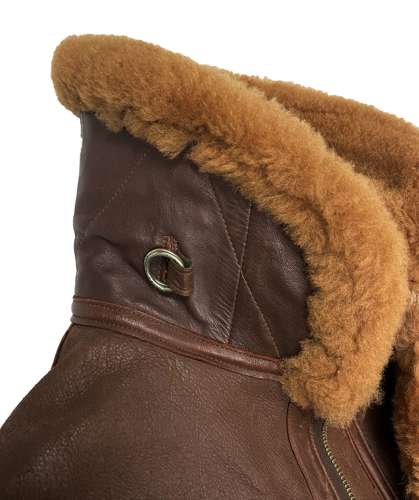 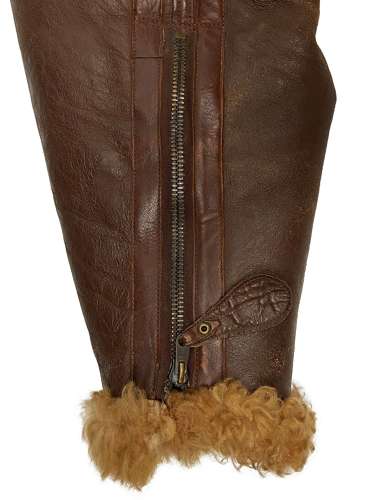 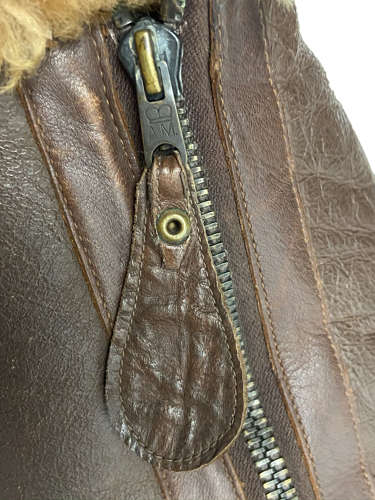 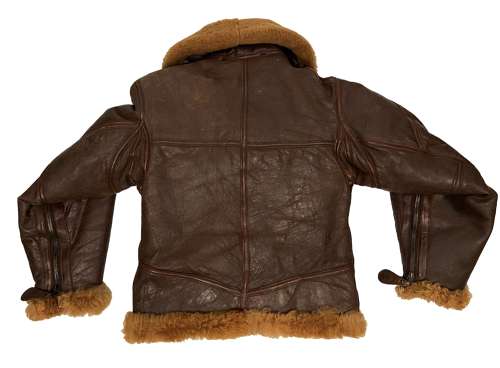 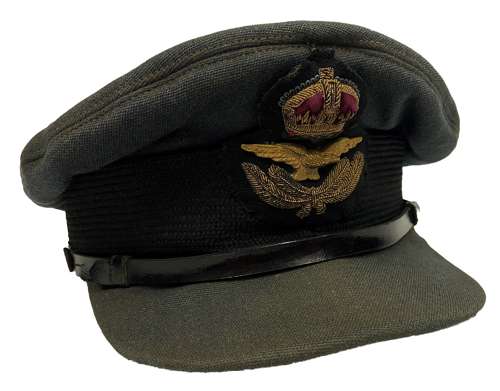 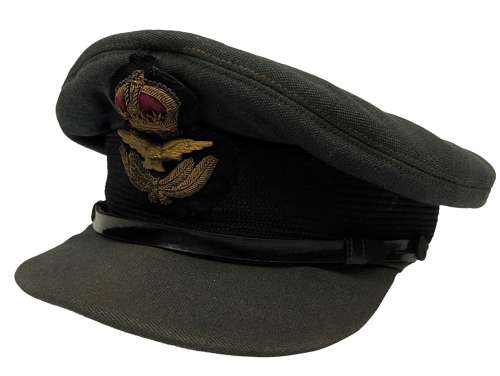 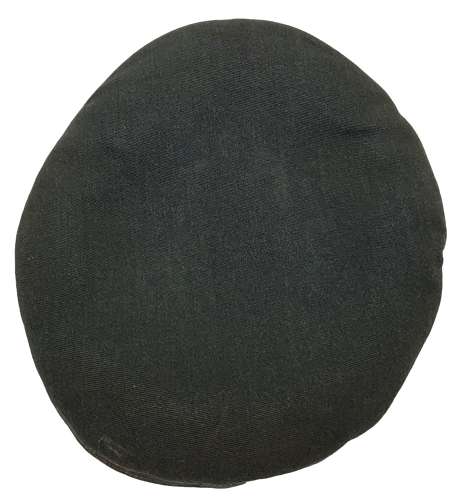 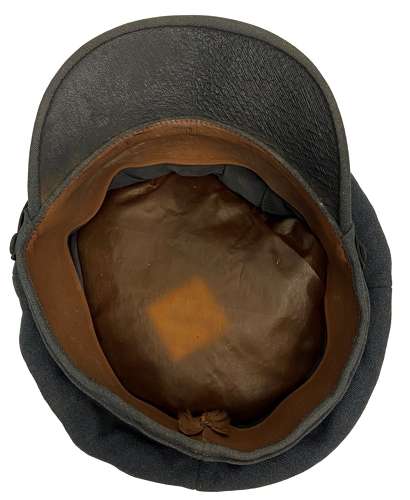 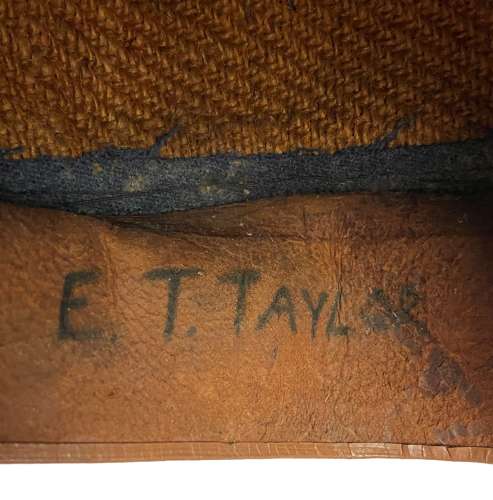 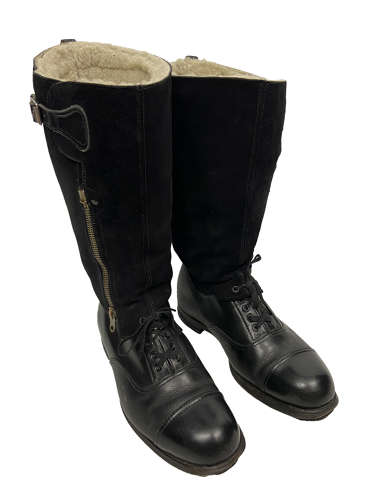 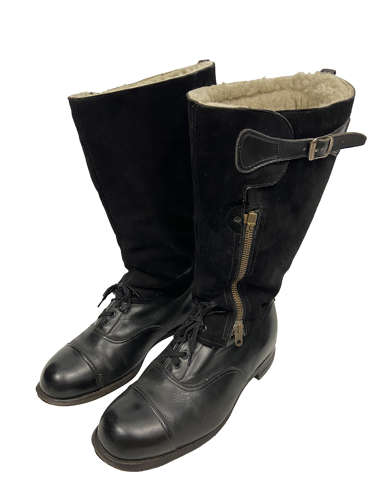 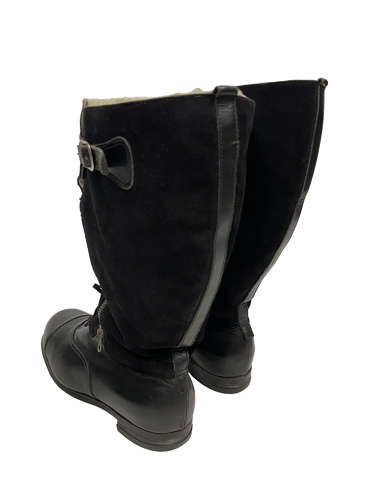 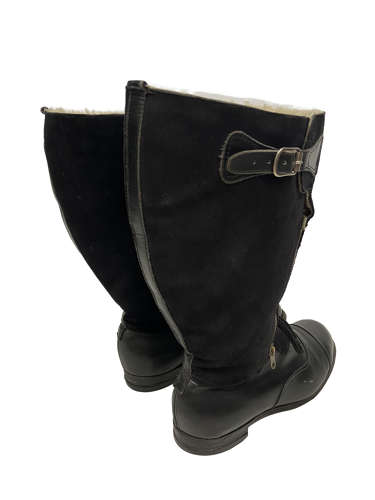 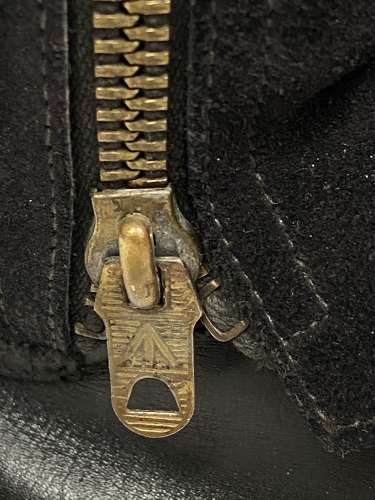 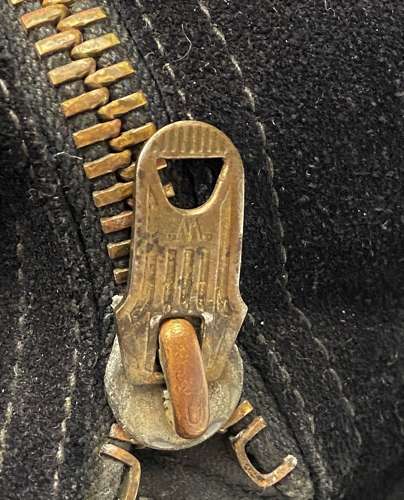 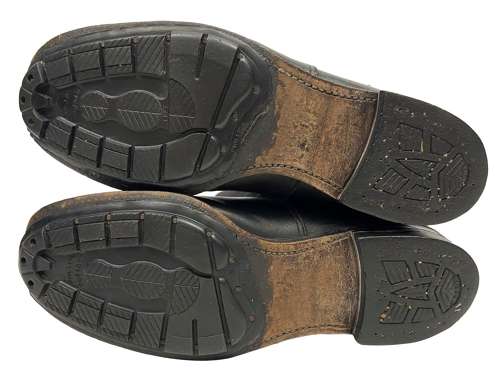 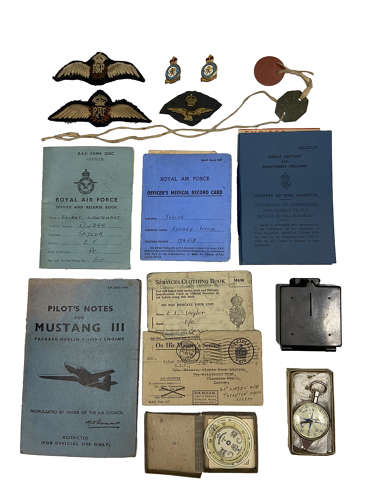 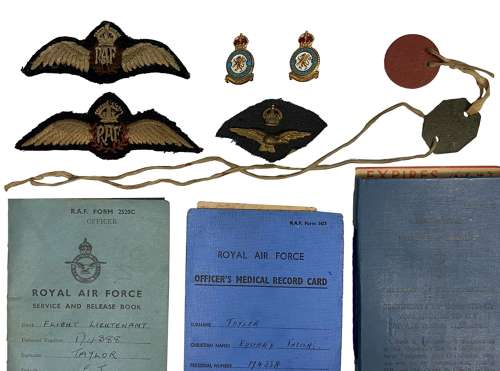 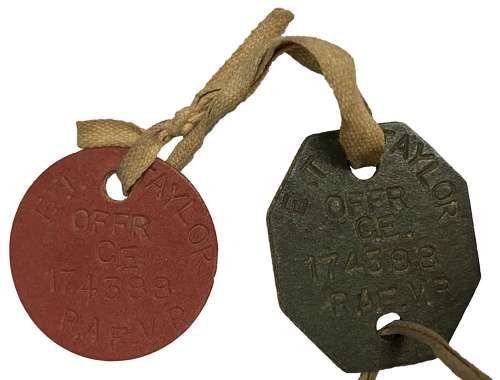 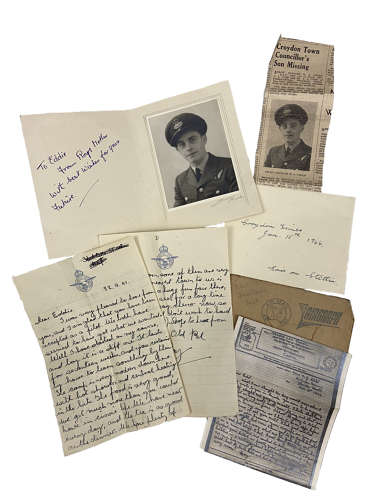 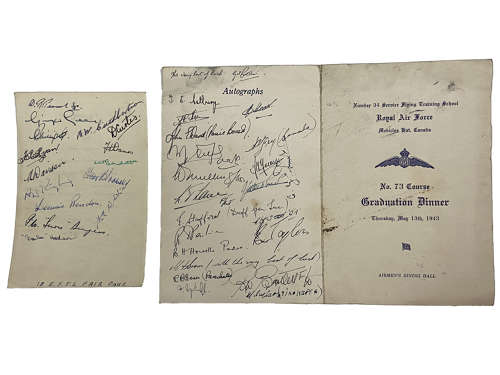 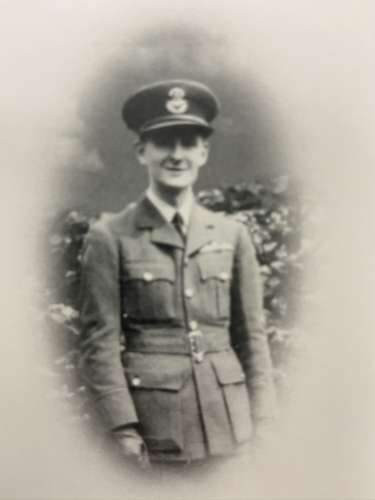 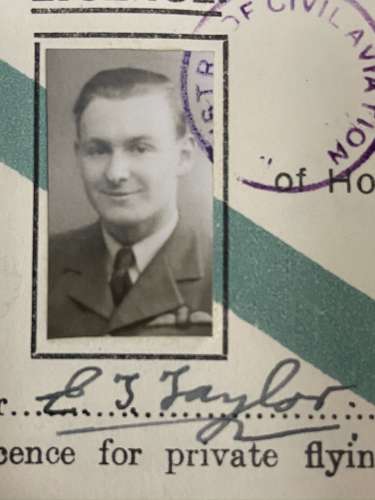 Edward 'Eddie' Taylor was born in Surrey in 1922 and was an only child. He had a grammar school education and entered permanent Civil Service at the National Debt Office in November 1939. Eddie joined the RAF Volunteer Reserve in 1941 and was accepted for pilot training in September 1941 with the rank of Leading Air Craftsman and the serial number 1324848. He soon departed for Canada where he trained at 34 S.F.T.S as part of No. 73 course at Medicine Hat airfield. He was commissioned in May 1944 and returned to England shortly after this having qualified as a pilot. On becoming an officer his service number changed to 174388.

He joined 234 Squadron who were flying Spitfires although there is little to no mention of 1944 in his paperwork. It is known that he returned to England in May 1944 and had become an instructor by December of the same year, but aside from two 234 Squadron lapel badges and mentions of it in his recent memoirs there is not much more information. His log books were lost in a flood in 1968 with only the last page surviving so sadly no clues can be taken from there! There is certainly scope for further research however.

Eddie finished the war as a flying instructor and served at a number of different OTU and flying schools including Condover and Boulmer. Interestingly his Physical Fitness test card shows at the first of the last three wartime postings he didn't score very well which may be an insight into the previous year of flying.

Flight Lieutenant Taylor was demobbed in August of 1946 but carried on flying for many years. His private pilot license is included and is stamped for 1946, 1947 and 1948. It also features a picture of him still in RAF uniform, complete with wings.

The grouping itself consists of a stunning late war size 3 Irvin flying jacket made by 'Links', an officer's peaked cap made by 'Hope Brothers', a beautiful pair of 1943 pattern escape boots, two sets of padded King's crown pilot wings, a photo album, Identity disks, compass and a huge amount of paperwork.

The Ivrin jacket is without a doubt the star of the grouping. Made by Links in 1944-45 as part of contract 10422, the jacket is in stunning condition for its age. It is of multi-panel construction and features the long, shaggy fleece to the body whilst the rounded collar (a feature of this maker) features the closer pile fleece. The exterior of the jacket is a beautiful chestnut brown colour and only shows limited signs of age and use. The jacket is strong, supple and the  polyacrilic coating is very good overall. All the metal work is still very bright with only very minor signs of age which add to the jackets extremely fresh look. All the zips are original and function well with the main zip being a lightning brand example with the two sleeve zips being Air Ministry marked. All the zips retain their original leather pull tabs which are all held on with brass rivets. A leather hanging loop is present to the inside of the neck and each set of eight metal eyelets are present under each arm. Inside the jacket the original label is still present and is bright and legible. The War Department broad arrow and the size of 3 are present to the top of the label with the stores reference of 22C/319 and the contract number 10422 below this. The sizes are present and the original owner has marked his name in blue ink which reads F/ Lt E. T. Taylor. The overall condition of the jacket is stunning and it really would be hard to better.

Next is the RAF Officers cap which was made by 'Hope Brothers'. It is a beautiful example with plenty of wear and use - just as they should look! The cap features a green underside to the peak, a narrow black patent leather chin strap and a bullion RAF officers cap badge. Inside the cap is fitted with a deep brown coloured leather sweatband which is marked 'Real Roan Leather'. The maker's label is affixed to the top of the cap and is not visible in the pictures due to the opaque lining. It is actually very bright and clear in person! The original owner has marked his name inside the sweatband as shown in picture 15. The cap is in good condition with no damage and has a great 'been-there' look to it.

The 1943 Pattern Escape Boots which form another large part of this grouping are in equally fantastic condition. This pattern of boots was popular with members of Fighter Command during the latter part of the Second World War and this pair have been extremely well looked after. The black suede uppers are in excellent condition as are the lower leather shoes. The sheepskin lining is also in good condition and all the eyelets still feature their black painted finish. The boots are fitted with brass, broad arrow marked zippers which are typically found on flying boots from this period. The soles have been fitted with original period rubber 'protector' soles which are made by Philips. The heels are also rubber, both of which are a common modification seen on original items which are preferable to leather soles.

As well as the uniform items there are a number of smaller items which include two nice WW2 period sets of padded pilot wings, a brass officers field service cap badge, Eddie's original identity discs, a British prismatic compass and two 234 Squadron lapel badges. As well as this is a photo album which mainly includes pictures of Eddie's time in Canada which includes some pictures of aircraft and flying clothing. There is also a book published in 2001 about the training school in Canada inside which is letter correspondence between Eddie and the author.

There is also a large amount of paperwork which forms part of the grouping, the vast majority of which is from the WW2 period. There is too much to list but most of it is shown in the first picture as well as in some more detailed shots. Items of note include: Service and Release book, Officers Medical Record Card, post-war pilots licence, two menus with a plethora of signatures, a 1941 dated RCAF note book, Pilots notes for the Mustang III, a small wallet of photographic negatives and the last surviving page of his log book. Also included is some more recent paperwork written whilst Eddie was still alive with various details and stories about his time in the RAF.

What is particularly poignant in the paperwork is a small group of items which relate to Eddie's friend, Roy. Clearly good friends who both joined the RAF at the same time, Roy went on to be a Flight Engineer and flew 40 operational missions with Bomber Command before being posted missing over enemy territory . Eddie kept a picture of Roy with a few other pieces of correspondence and it is a sad reminder of the realities these men faced during the war.

Altogether a truly fantastic grouping which offers the potential for further research.