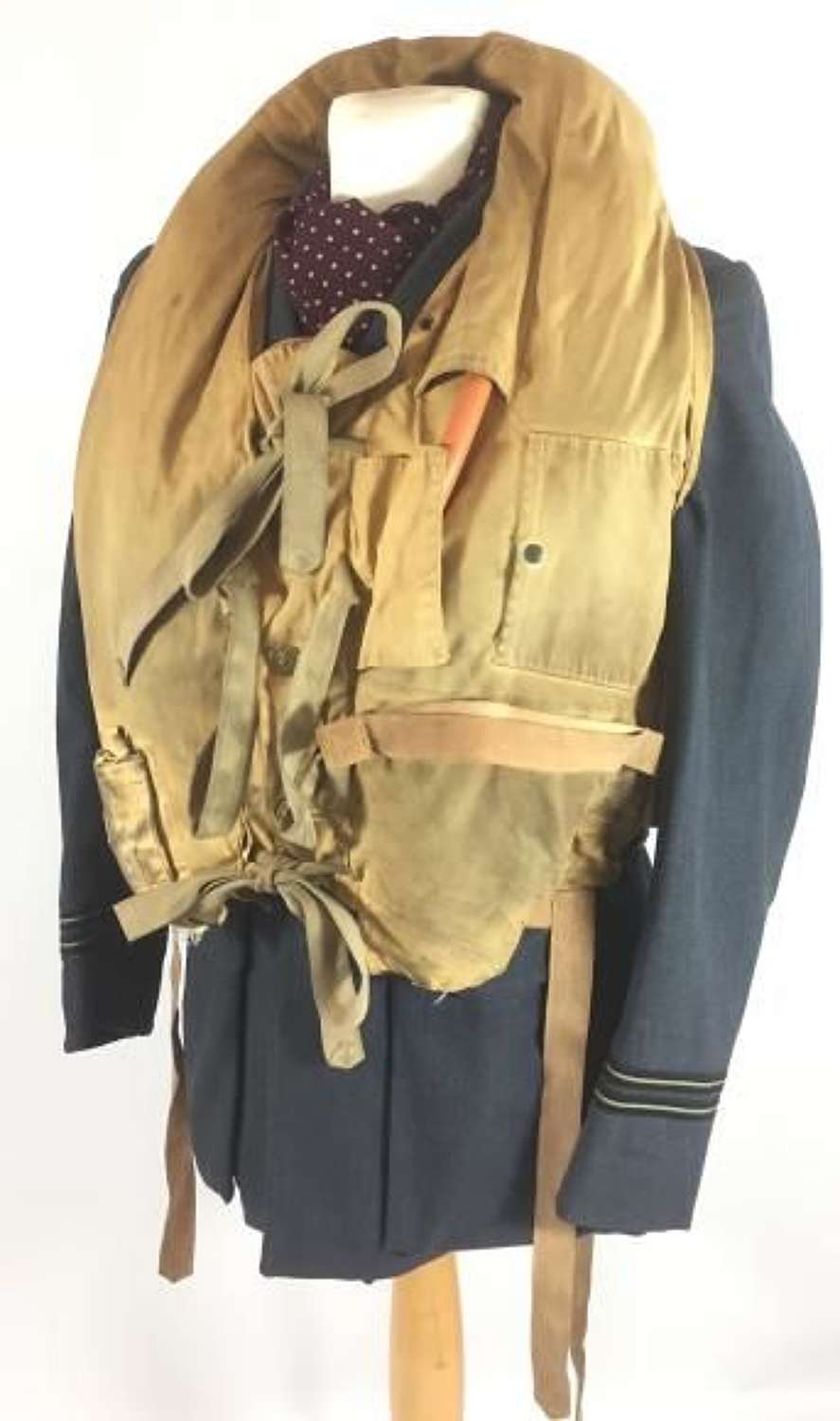 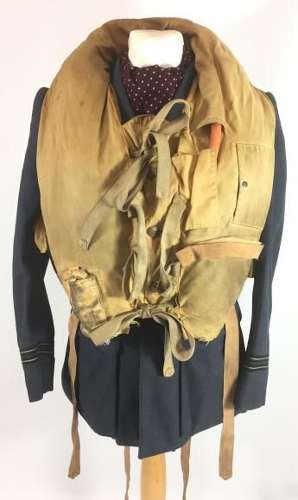 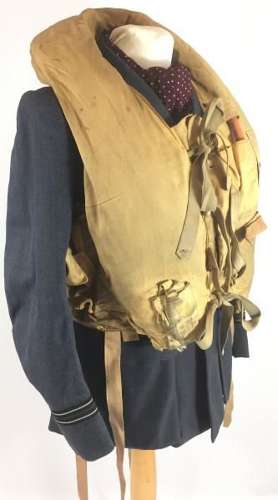 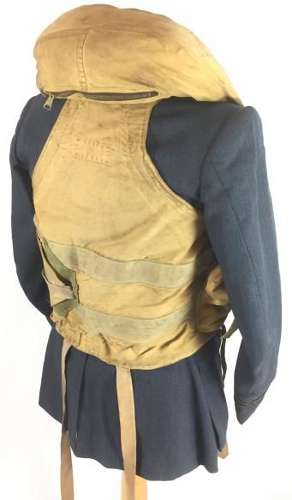 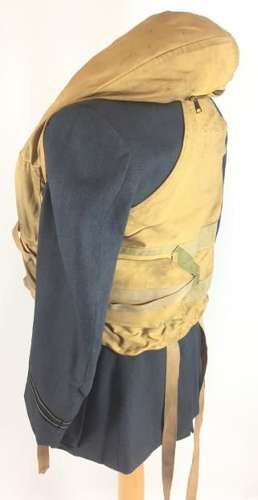 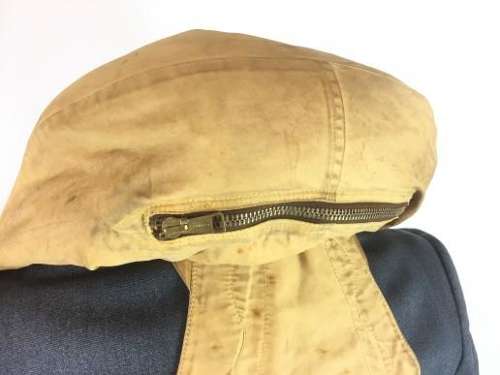 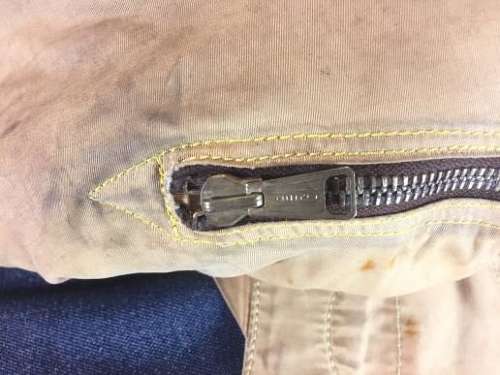 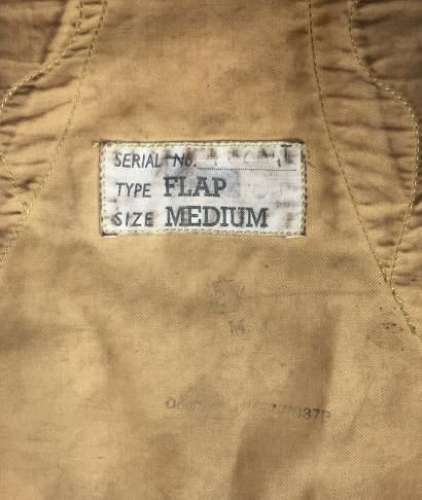 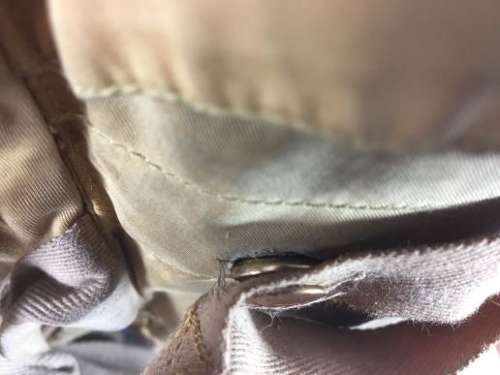 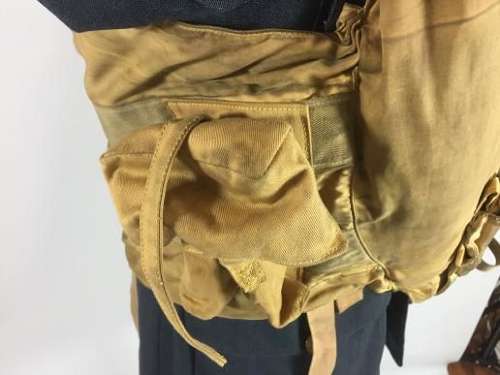 SOLD
A very rare item to find these days - An original RAF 1941 Pattern 'Flap Type' Mae West as used by RAF aircrews in the early half of the Second World War.

This rare life jacket has its original label inside which states 'Type Flap, Size Medium'. Above this is the words 'Serial Number' followed by a space for the owner name, which has never been filled in. Whilst the label states 'Flap Type', there is no flap present on the Mae West. These were more often than not removed as they would snag on the inside of aircraft and could also get wrapped about the head of an airman who had ditched, resulting in drowning.

Below the label can be seen a black ink stamp of the Air Ministry crown as well as the letters AM. Below this is a contract/stores number. The stamp has survived and makes it clear that this is an authentic Air Ministry issue item.

The Mae West features all of its leg straps, tying tapes, grab handles and original buttons. There is a floating torch pocket on the right hang side, a dye-marker/florescent flap to the other hip, a heliograph pocket and a CO2 inflation lever pocket which are all standard features of the 1941 Pattern Mae West.

The rear of the life jacket features a brass 'Aero' zip which is an original period example. Inside are a set of high quality reproduction Kapoks from Steve Kiddle at Pegasus Militaria. The kapoks help to give the Mae West its proper shape and are authentically AM stamped etc so that on opening the flap zip everything looks 100% authentic.

Whilst the flap is missing, this is still an early 1941 Pattern Mae West clearly marked up as a 'Flap Type'. Flap Type examples come onto the market very rarely and this is a good solid example.

Please note that the dummy bladder tube is not included with the sale of this Mae West.