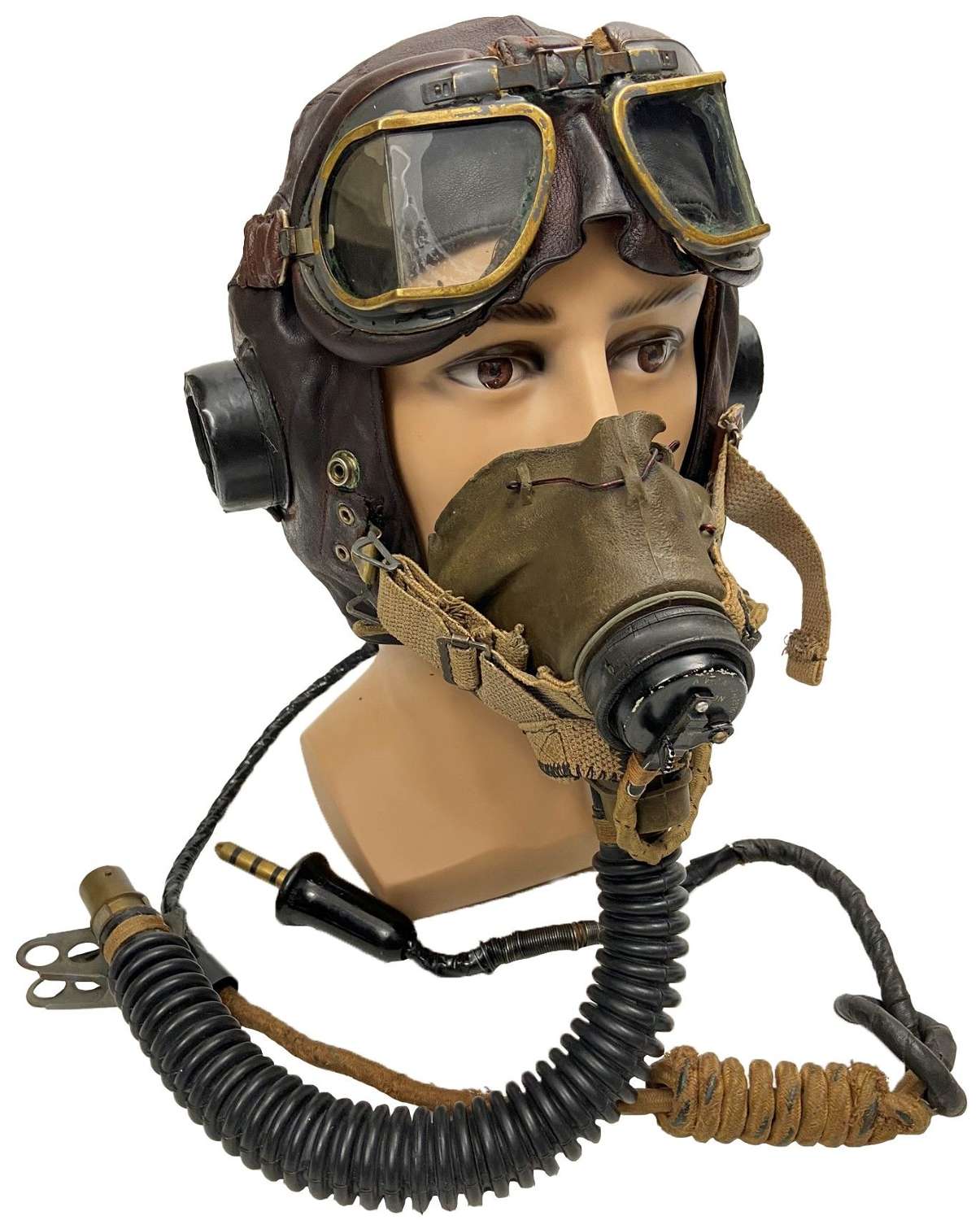 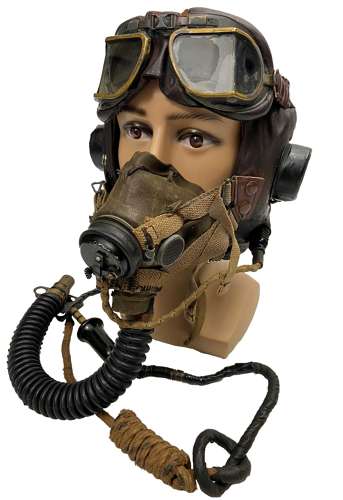 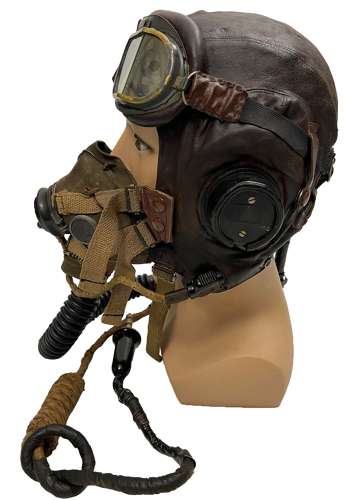 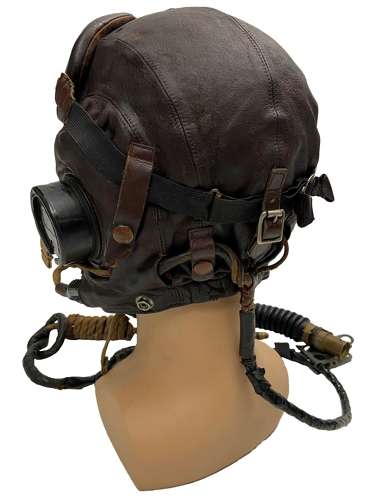 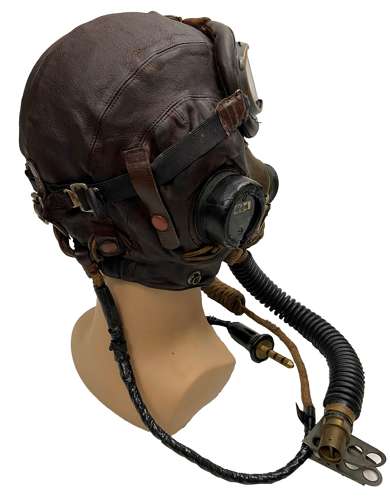 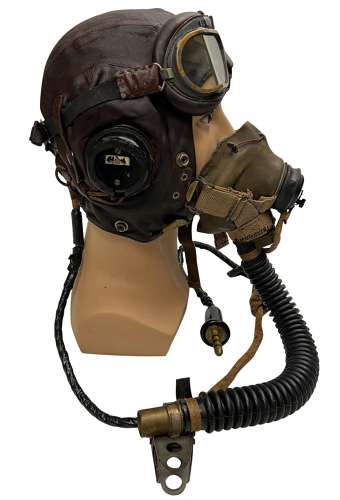 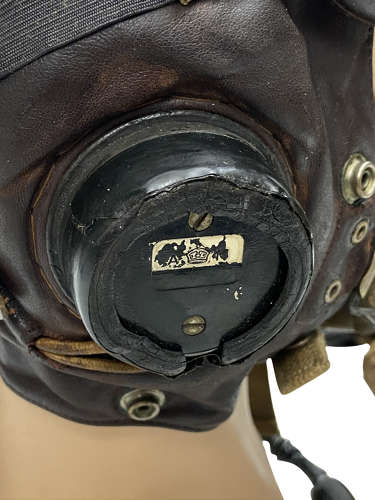 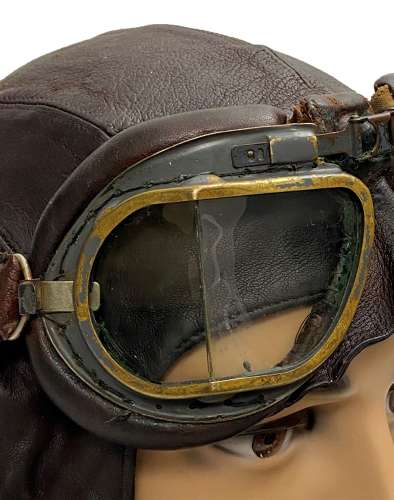 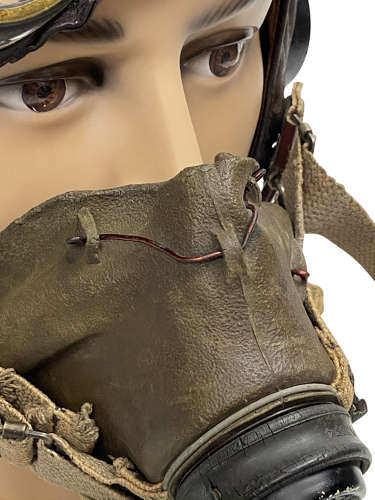 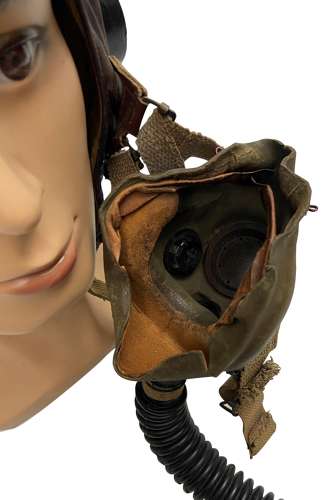 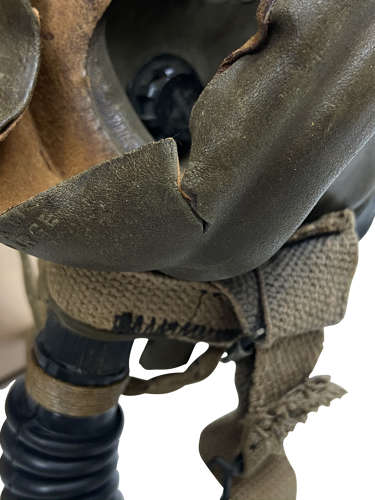 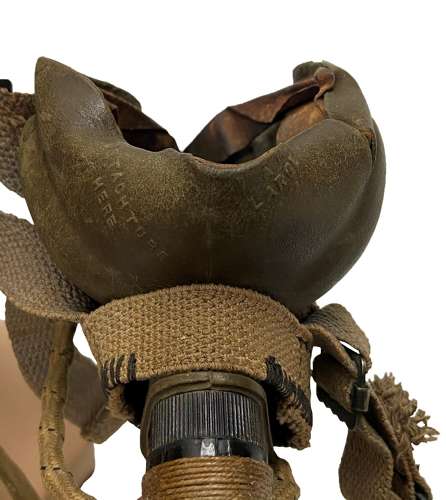 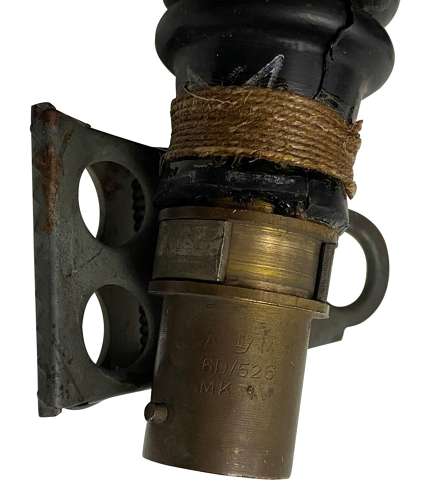 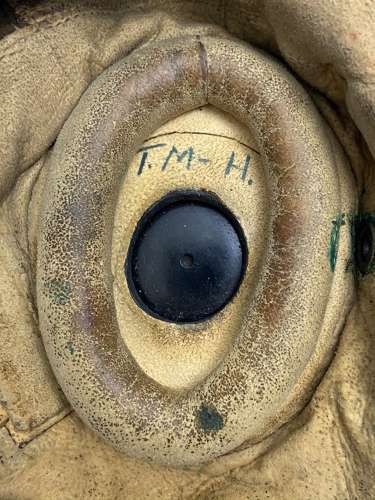 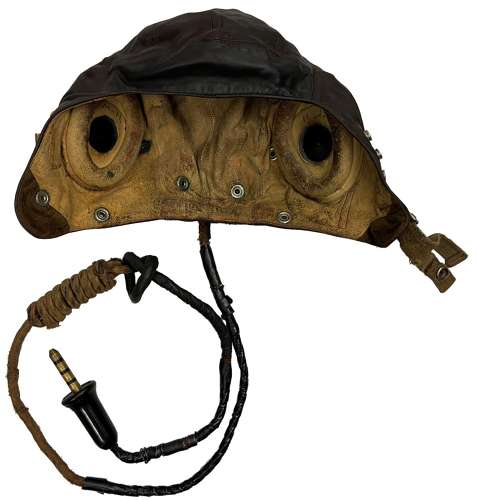 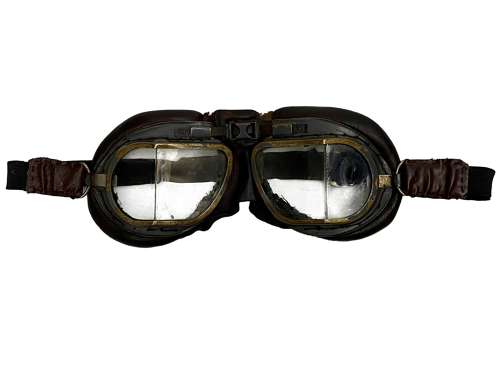 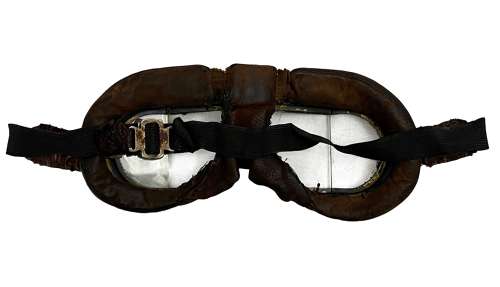 The helmet, goggles and mask are wartime examples and all belonged to the same original owner whose initials were 'T. M-H'. They have clearly always been together and are offered onto the market for the first time.

The C Type helmet is a nice wartime example which is a good, larger size NO. 3. It is an early internally wired example and still retains its original receivers and wiring loom. The loom has seen plenty of action and has had black electrical tape added to it by the original owner. He has also fitted some of the same tape around the rubber receiver cups. All the pop studs work as they should and the chin strap is still present. The interior is grubby with signs of wear and use and the exterior also shows signs of age. There is also some age to the rubber of the right hand receiver cup. Overall however it is a nice sound example which displays well.

The helmet comes with a G Type oxygen mask of the pattern introduced in 1942. This mask stayed in service until late 1944 when it was replaced by the H Type Oxygen Mask making this a guaranteed wartime item. The mask is made from green rubber and is fitted with a Type 48 microphone. The 10A marked rubber dust ring is still present to the outside of the microphone. The original harness is also still present although has lost some elasticity and shape. It does however still keep the mask nicely in place on a display head and doesn't particularly detract from the overall look. The bottom of the mask is marked 'large' and the interior still retains its chamois lining, although some of the glue has dried out. The mask displays well but shows signs of age and wear as they all too often do. The edges are 'dog eared' in places and there is a split to the rubber as shown in the pictures.

The mask is fitted with a hose which features an original MK IV brass bayonet connector. The connector bears the Air Ministry marking and king's crown as well as the stores code of 6D/526. The hose itself feels stiffer than usual and is quite possibly a more recent replacement. It displays very well and if it is a modern replacement is very hard to tell from the real deal. The hose has been added to this set to complete it for display purposes and did not come with the other items.

A set of MK VIII goggles complete the set. They are again wartime examples with the curved lip to the brass frames and feature the all important Air Ministry marking the the leather bridge, albeit faint. Like the helmet and mask they have seen plenty of action with only some of the blue paint finish remaining. The goggles are fitted with a black elastic strap which still retains both of the leather pullers to the metal adjusting buckle. Overall the goggles are in good condition and display nicely.

All in all this is a great Second World War headgear set. Whilst not in perfect condition the patina and wear match well across all the pieces as they have been worn together. Wartime helmets and oxygen masks are becoming harder and harder to find making it a pleasure to offer this original set.

This would undoubtedly make a fine addition to any WW2 aviation collection.