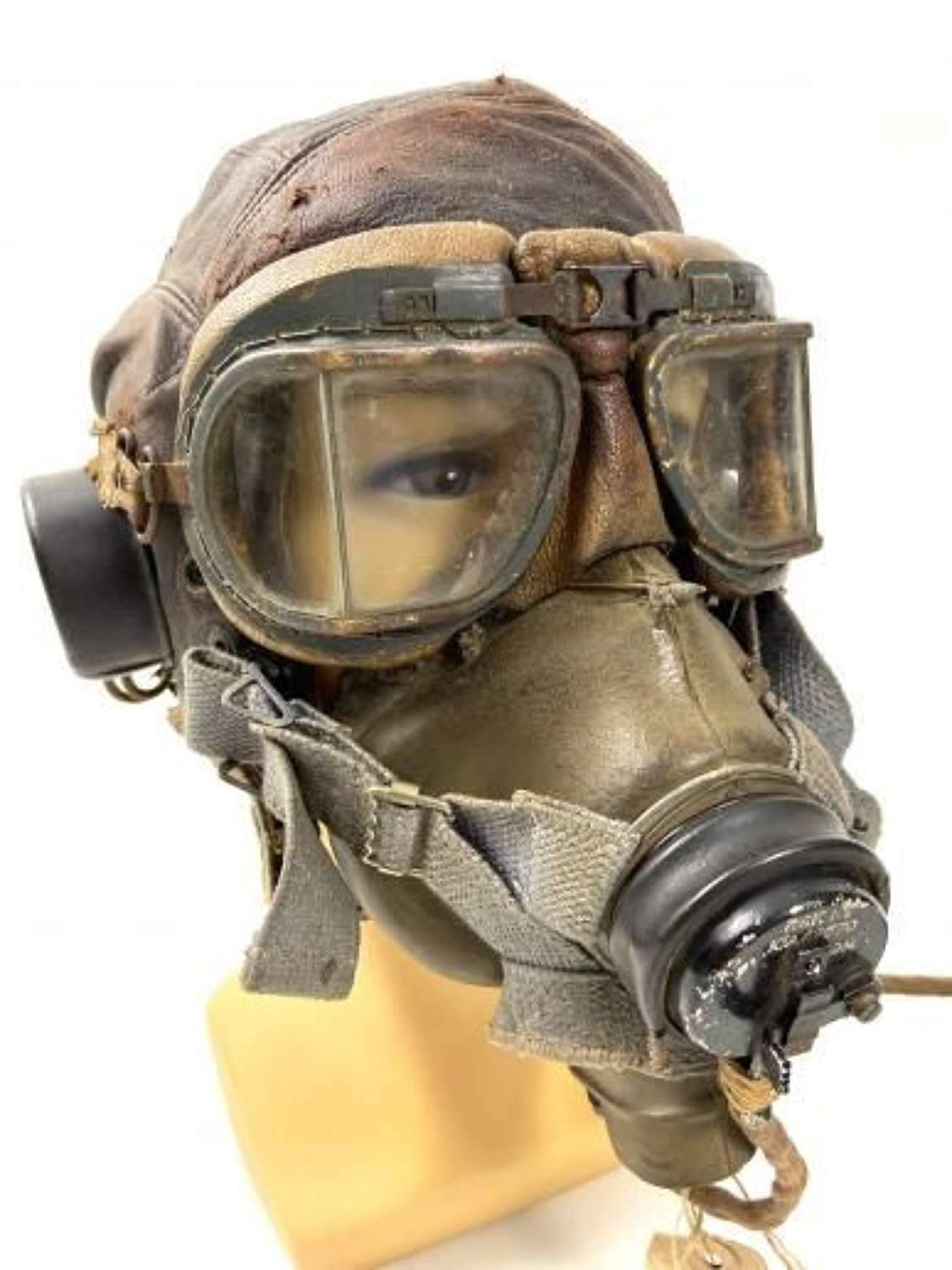 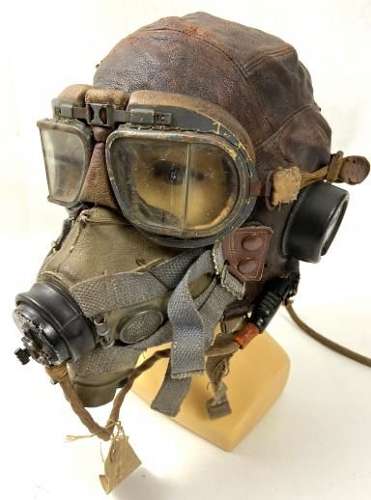 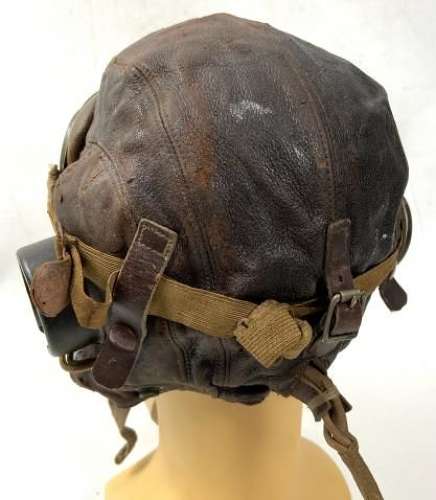 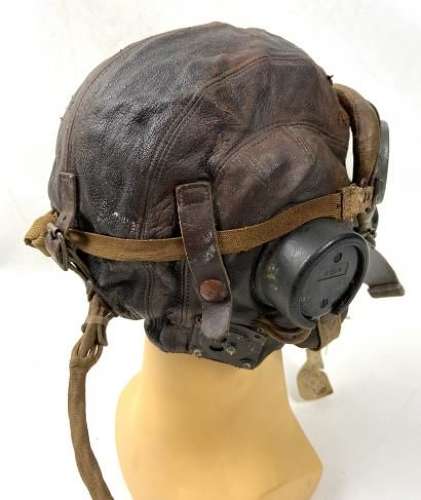 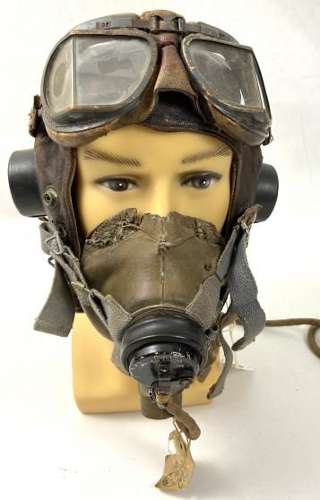 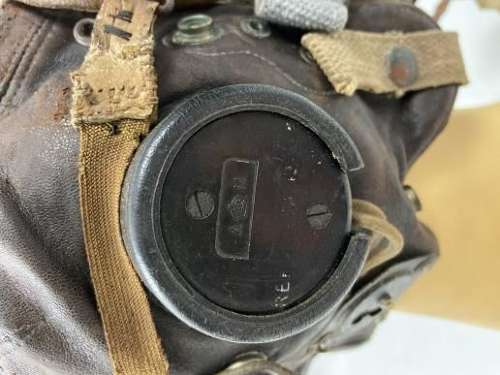 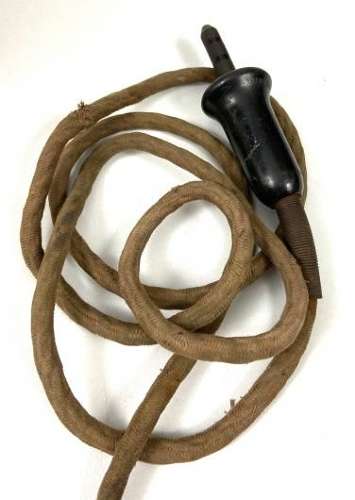 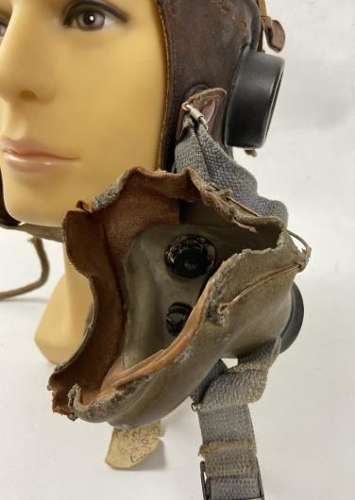 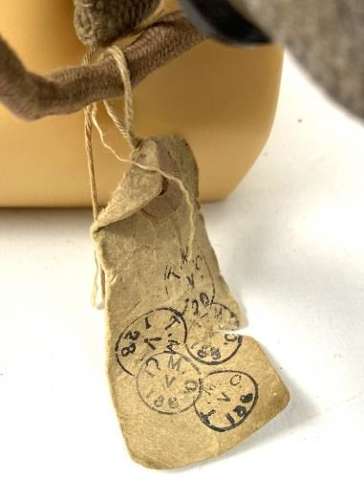 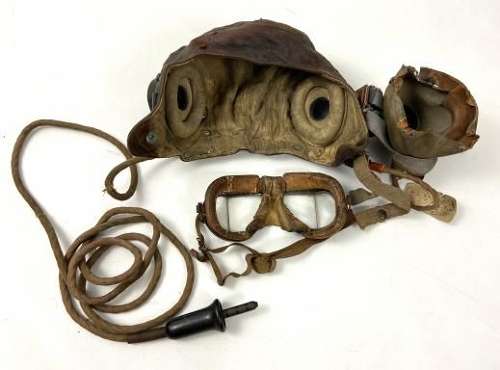 This set is indicative of those worn by RAF Aircrew during the Second World War featuring all correct wartime pattern components. The C Type flying helmet is a mid - late war variant with an internal wiring loom. The G Type Oxygen mask saw service from 1942 until being replaced in early 1945 with the H Type mask and the MK VIII goggles came into service in 1943. Thus, all the parts make up a historically accurate set for the 1943 to 1945 period.

The C type helmet comes complete with a set of original receivers and an original wiring loom. The end of the loom retains its original bell plug which appears to be in good condition. The overall condition of the helmet is reasonable and it displays well. It does have some nicks to the leather however and signs of service wear to the interior. The leather has also split around the opening for the oxygen mask connector below the left ear piece. None the less all the pop studs work and the helmet appears to be complete.

The G Type mask is sadly not the best example and has been repaired so that it can be displayed. It is fitted with the correct Type 48 microphone which appears to be un-issued as it still retains its original stores ticket. The harness appears good and the wire nose piece is still intact. The rubber face piece however has not aged well, going in the usual places. The edges of the mask are poor and a section around the righthand side of the nose is particularly bad. Please study the pictures for a clearer idea of the damage.

The MK VIII goggles display well on the helmet and retain plenty of their original blue paint finish to the brass frames. The strap is original but has lost a fair amount of its elasticity and has had a know tied in it, as is common to find. It still holds them onto the helmet fine The leather face cushions look good although the chamois rear does have a small amount of damage and a small hole to the upper side of the left eye cushion. This can be seen in the pictures.

Whilst not the worlds finest set to ever be offered on the market, this is still an original WW2 RAF set which displays nicely. It would make a great addition to any RAF display and has been priced accordingly with the condition.

Please note - The display head is not included.