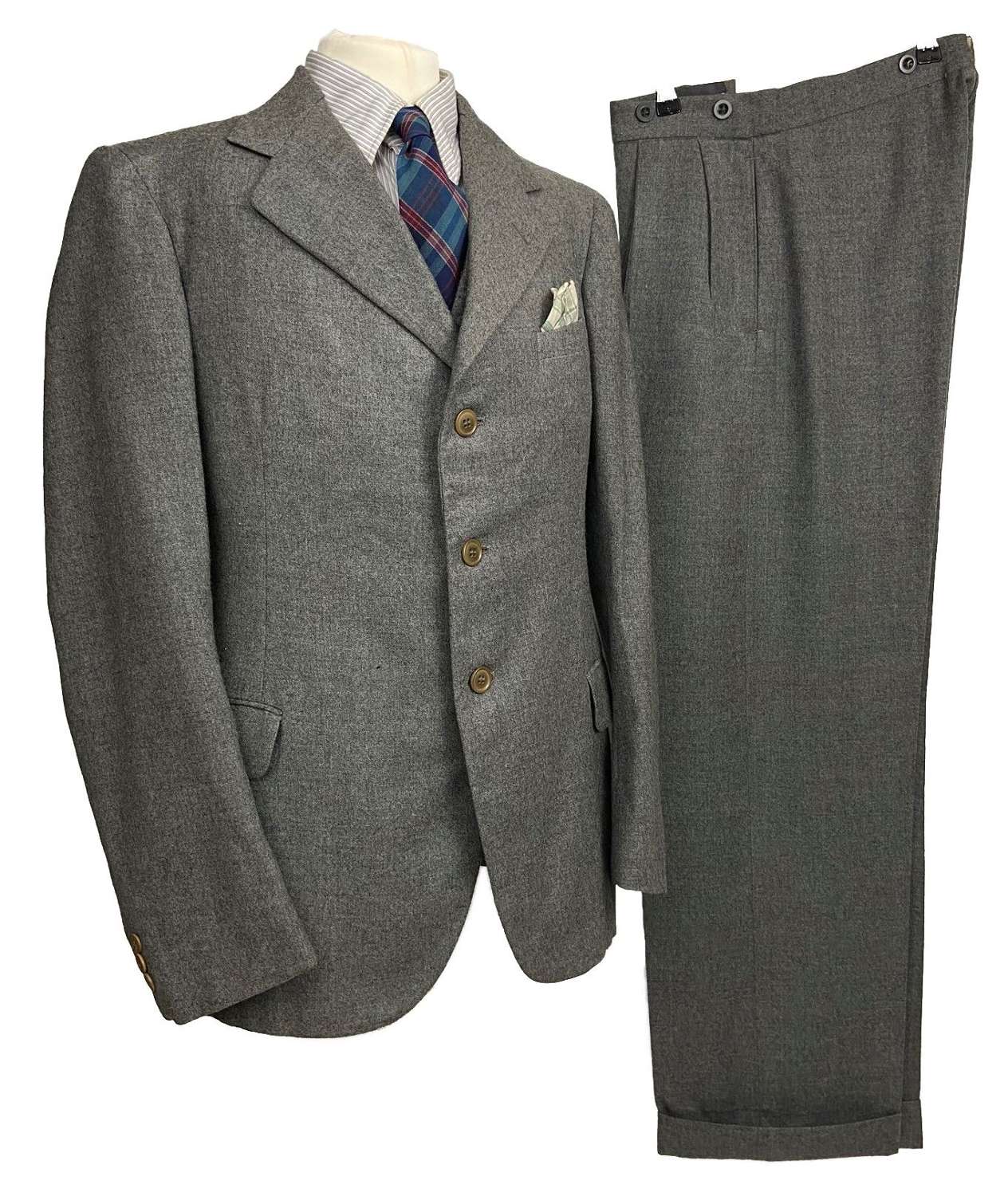 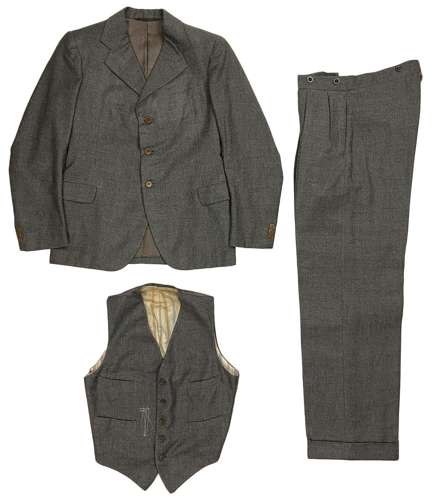 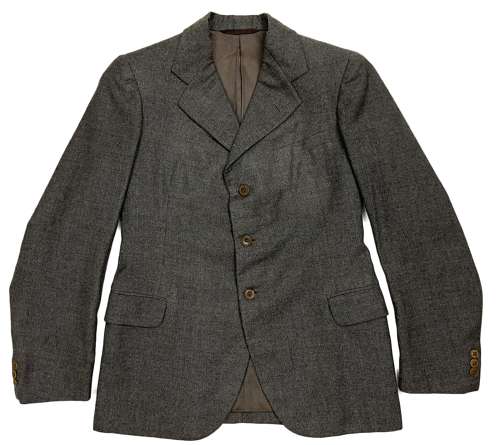 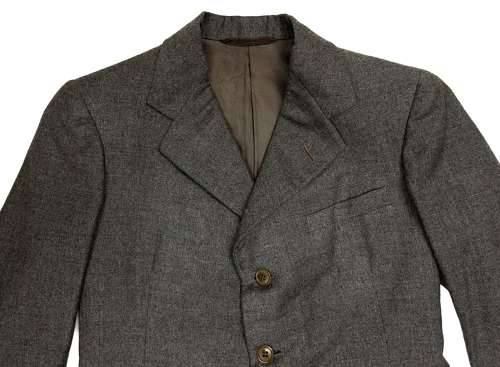 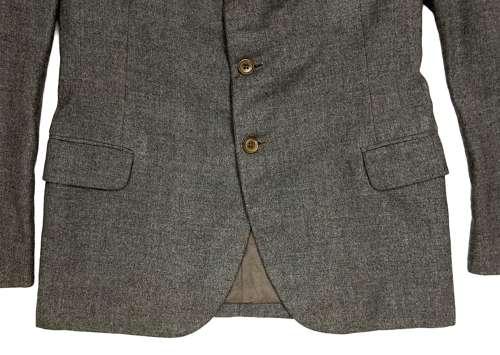 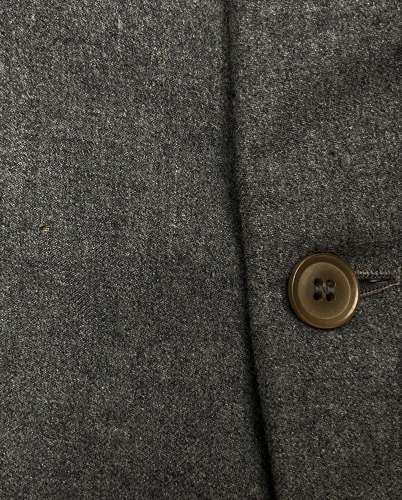 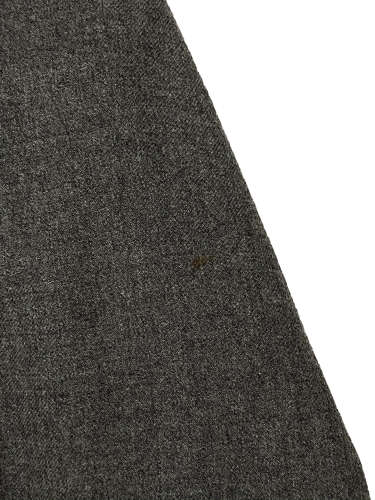 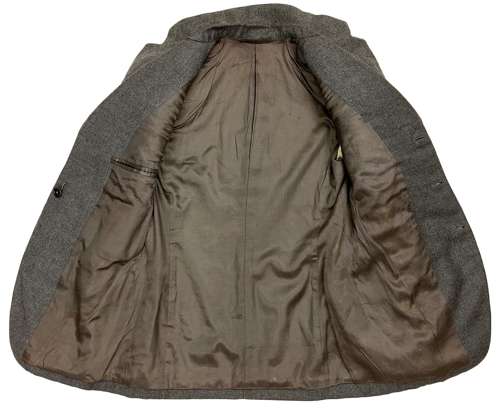 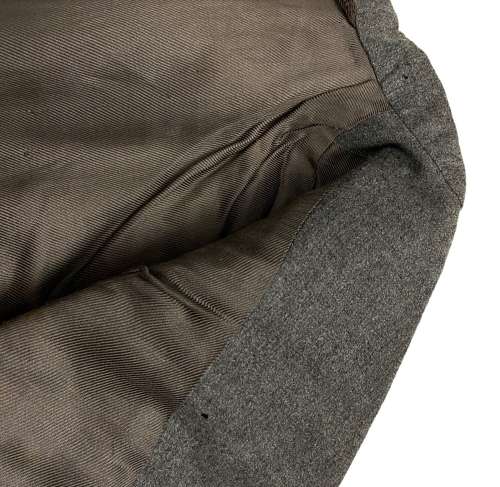 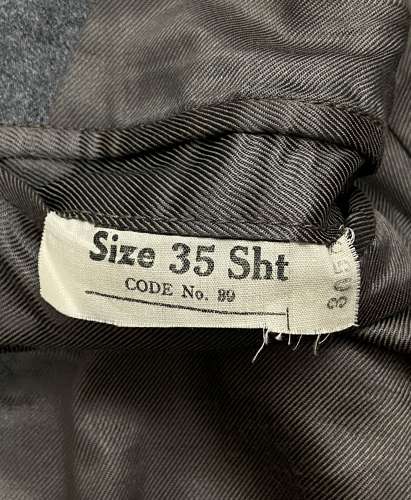 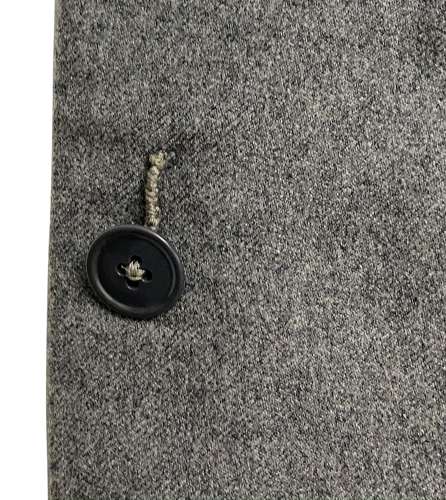 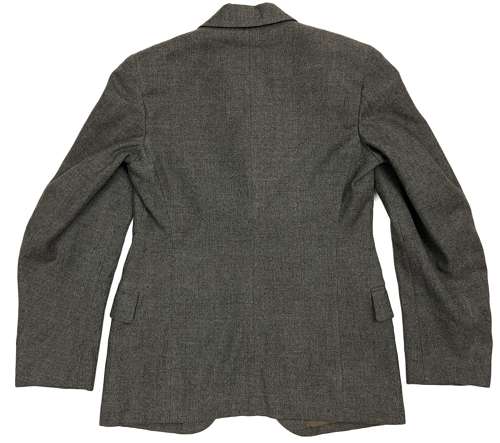 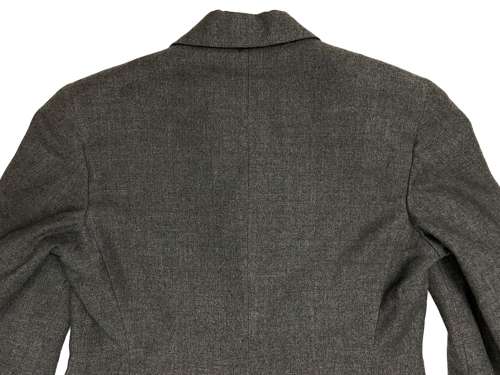 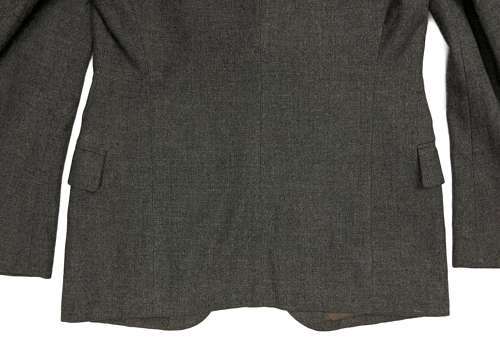 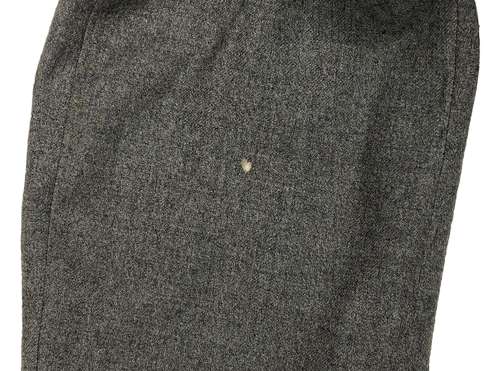 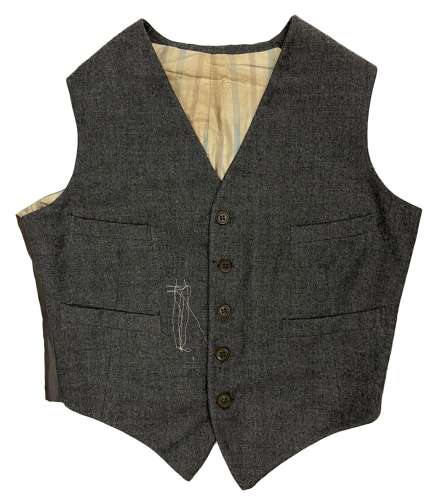 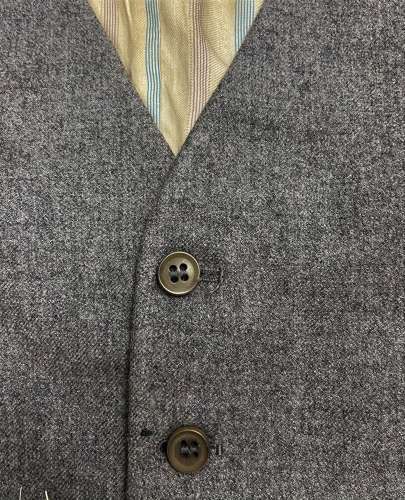 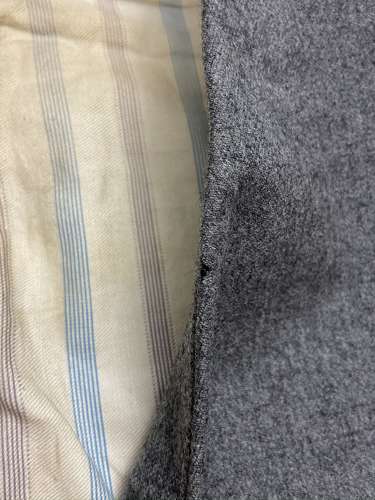 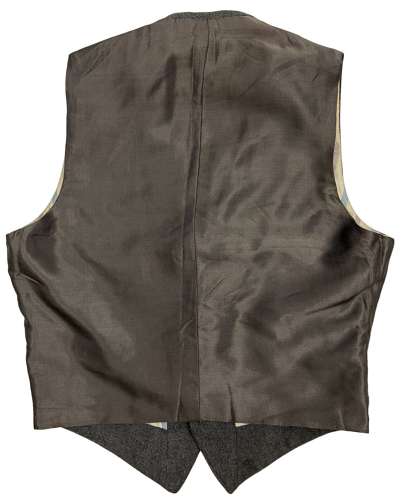 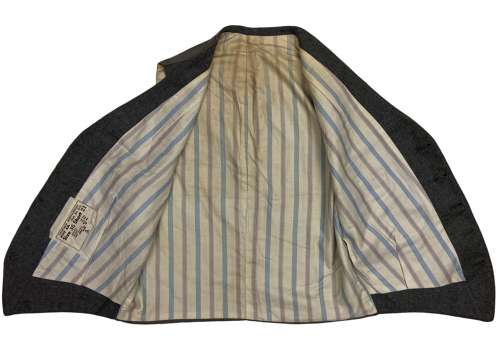 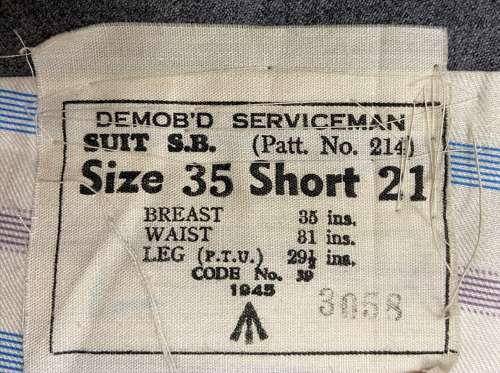 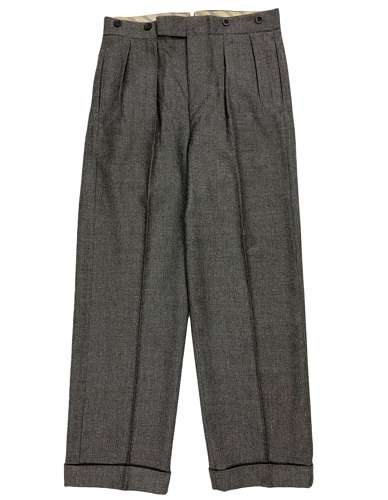 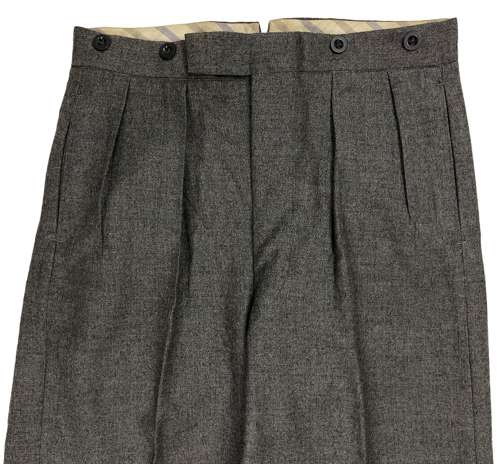 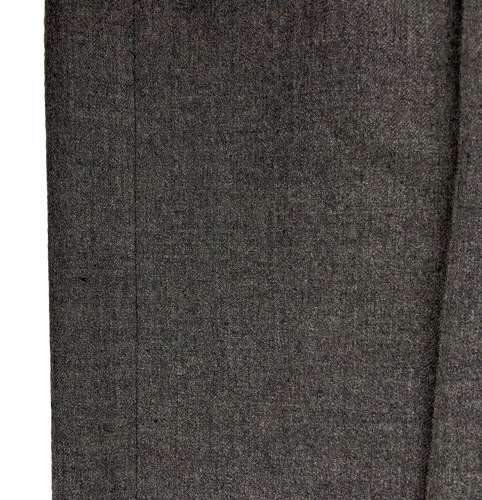 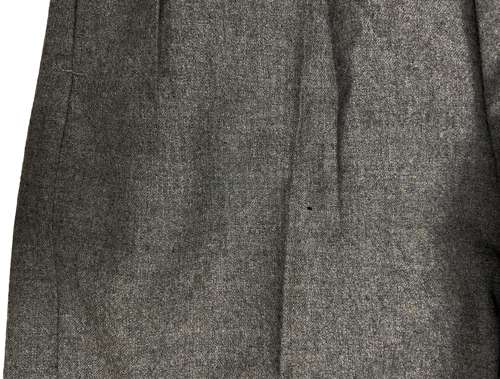 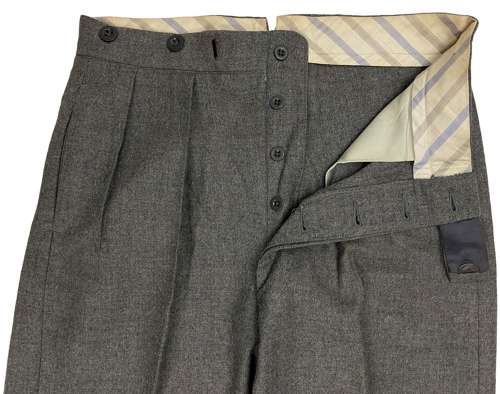 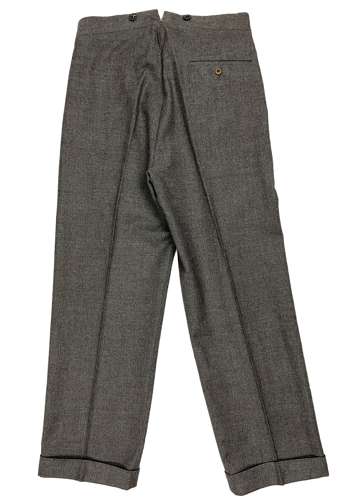 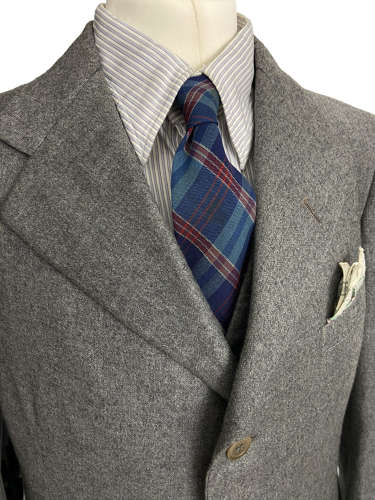 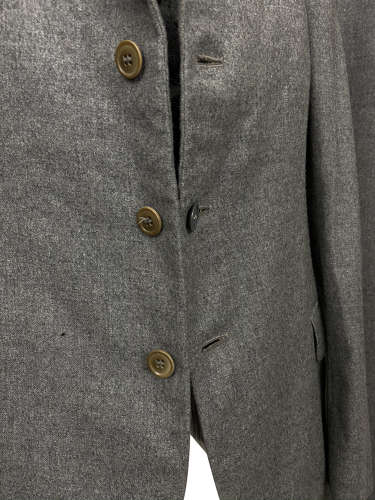 A scarce original 1945 dated British three piece single breasted Demob suit in grey. No British Army or RAF collection could be complete without one of these!

This rare suit was made as part of the 'demob' clothing scheme which came into effect in 1942 and was designed to supply those men and women leaving the British forces with a complete set of clothes when they were 'demobilised', or 'discharged', from military service. Original examples of demob clothing are now becoming quite rare, especially war dated examples which still have their original labels such as this.

The jacket is typical of the era being of a three button single breasted cut with two lower flapped pockets and a pronounced lapel shape. It is made from a light grey coloured wool flannel material and features light brown buttons which contrast nicely against the solid colour. The jacket is cut short in the body and features no rear vent as was standard during the 1940s. The interior is fully lined with a grey rayon material and the original issue label is present to the interior pocket. It bears the size of 35 Short and code number of 39 and is the standard label used for demob suits dating from the Second World War. A particularly nice feature of the jacket is the swing button as illustrated in image 3 - A typical period feature!

The suit comes with a matching waistcoat which is made from the same grey wool flannel and features a rayon back. In keeping with the utility measures in place at the time, the waistcoat features no cinch back belt and buckle to the rear. It is fitted with 5 buttons of the same colour as used on the jacket and features four welt pockets to the front. The interior is lined with a white striped cotton. One of the nicest features of the suit is that it still retains its original issue label to the interior of the waistcoat. The stitching of the label is still clearly visible to the exterior of the waistcoat which would suggest that it has never been worn. The label bears the title 'Demob'd serviceman Suit S.B. (Patt No. 214)' and the size of 35 Short. Details pertaining to size are present as is the War Department broad arrow marking and the 1945 date.

The trousers feature a high waistline and a wide leg as was the fashion of the time. The button fly is typical of British suits of this era as is the single rear pocket which fastens with a button. The front of the trousers features a twin pleat and turn ups can be found to the bottom of each leg. Buttons are fitted around the top of the waist to which braces can be attached.

As stated on the various labels, the suit is designed to fit someone of a 35" chest. When laid flat it measures -

The suit is in very nice condition overall and displays well. The original label still being attached to the waistcoat would suggest that the suit has not been worn but stored. There is however some soiling to the lining of the waistcoat and a number of very small moth nips which are detailed in the pictures. The most noticeable of these include one to the front of the jacket, one to the front of the trousers leg and a larger one under the left sleeve which is not seen when worn. All of the flaws can be seen in the pictures and could be professionally mended by an invisible mender to make the suit perfect. Please study the pictures provided before purchasing.

A stunning original suit, the like of which is very hard to find today. Not only is it a desirable colour but it still retains its original labels making it a collectable in its own right. A must have for the serious British collector!