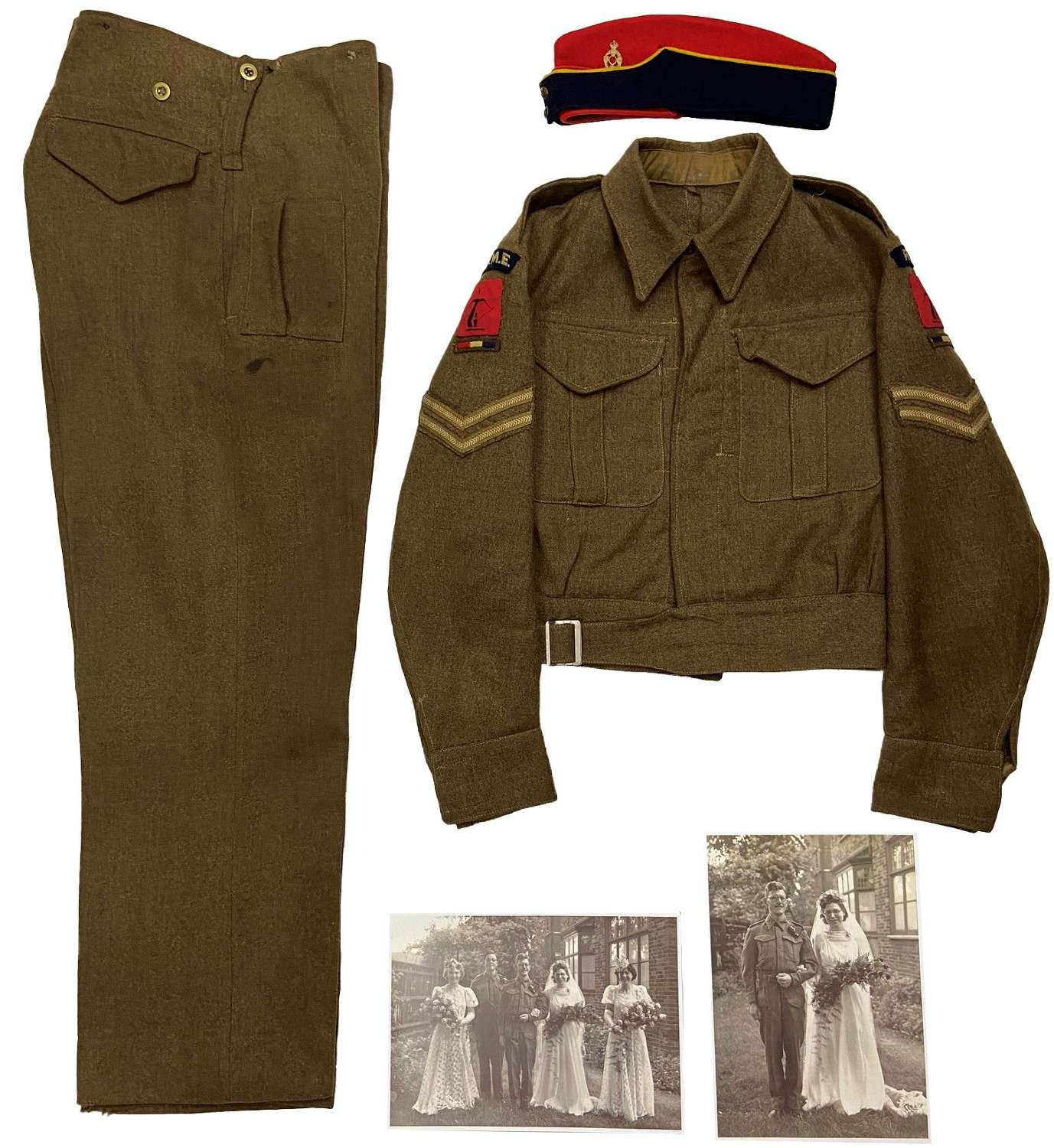 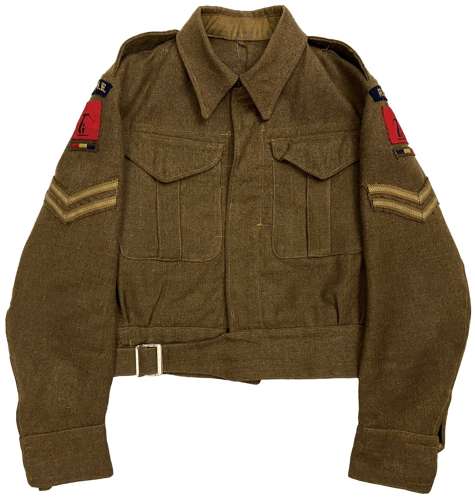 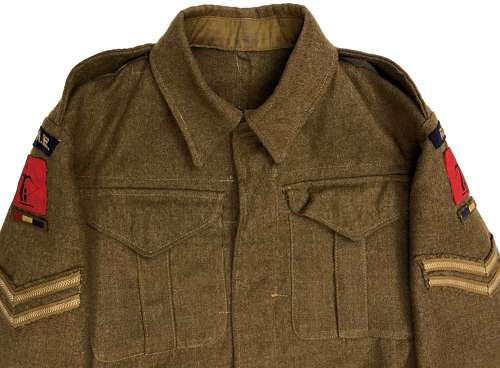 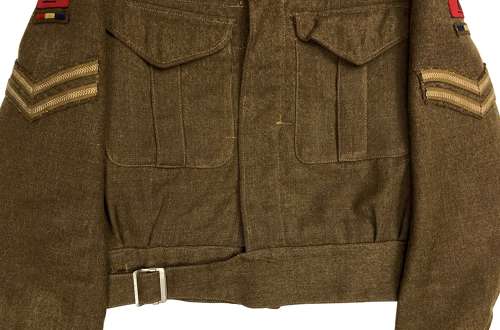 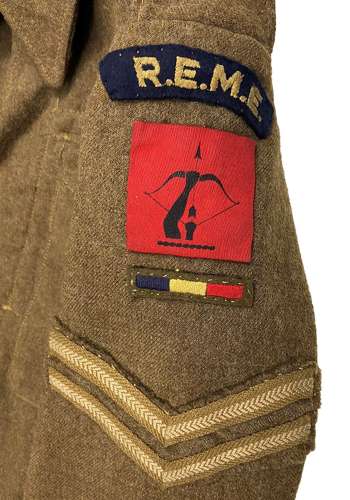 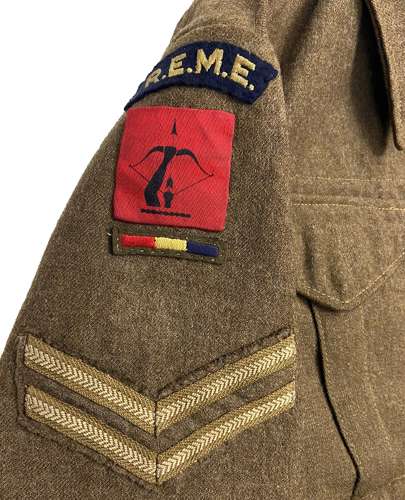 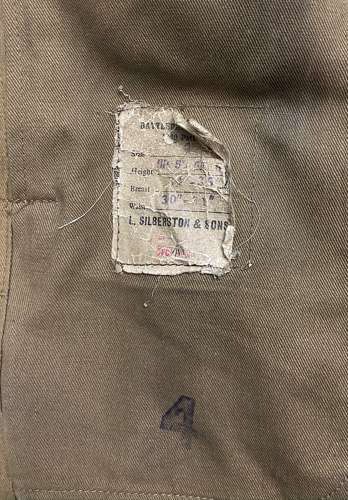 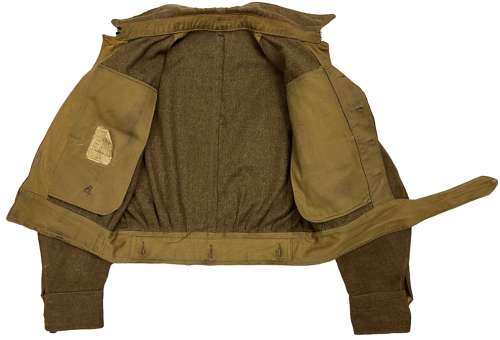 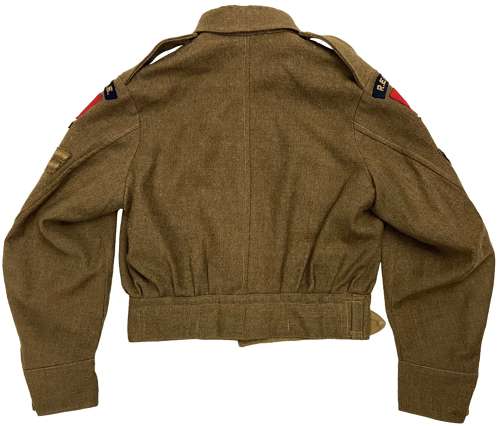 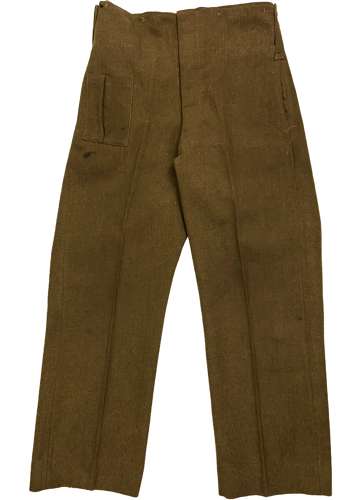 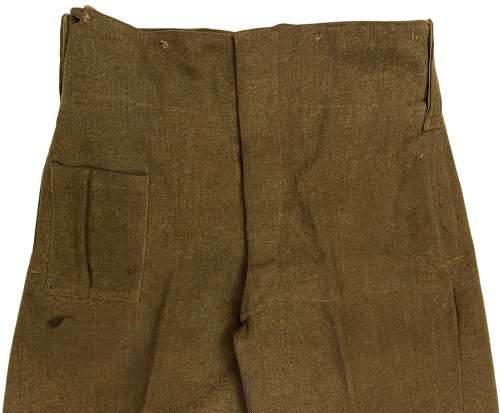 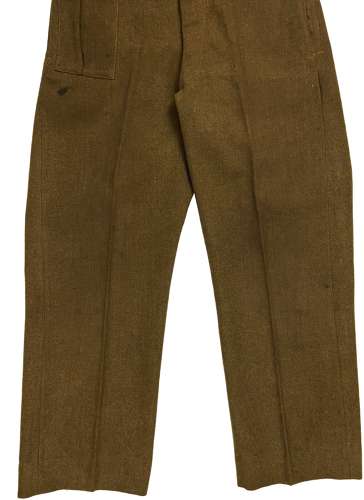 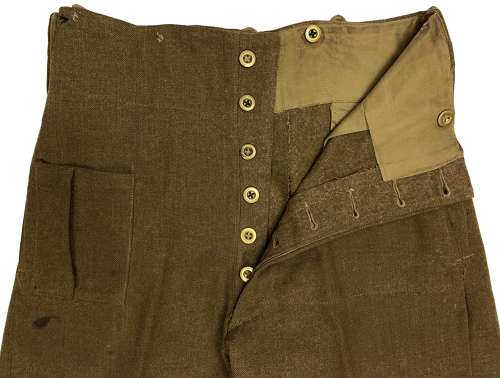 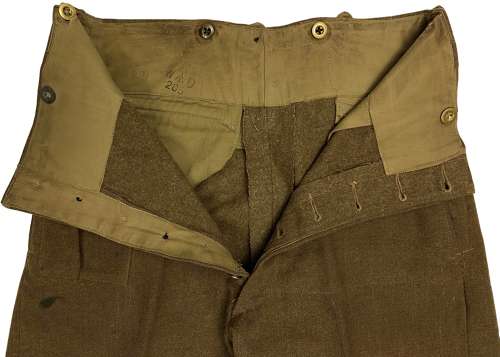 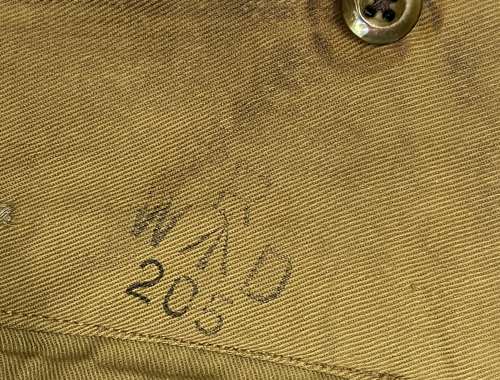 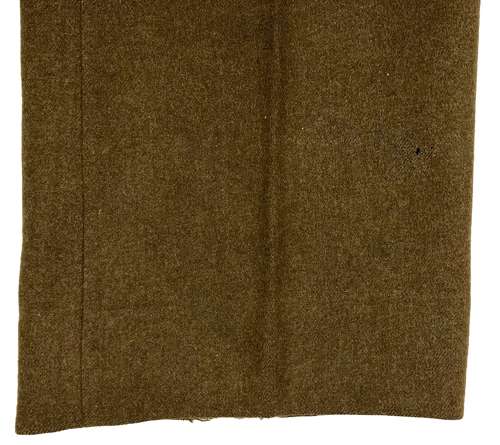 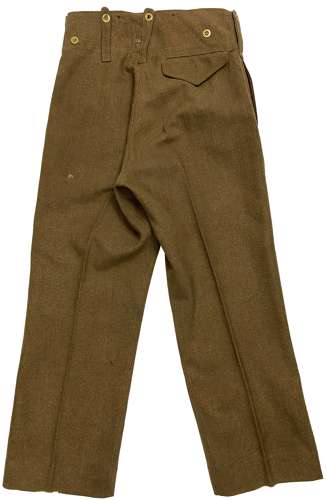 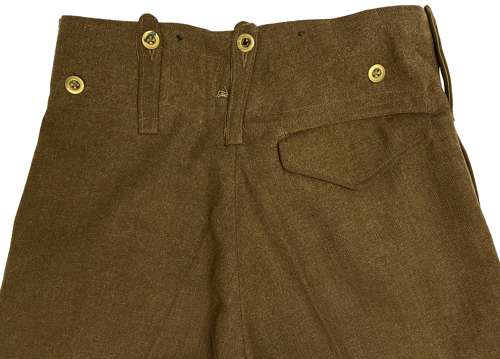 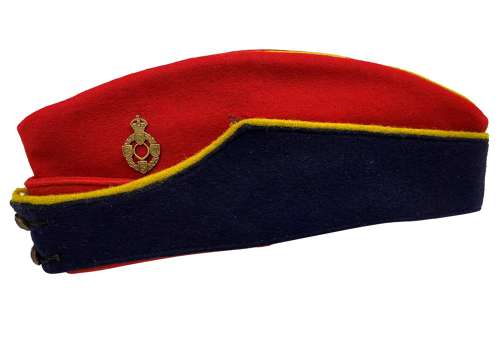 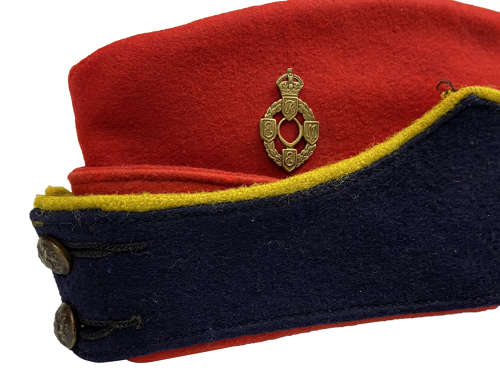 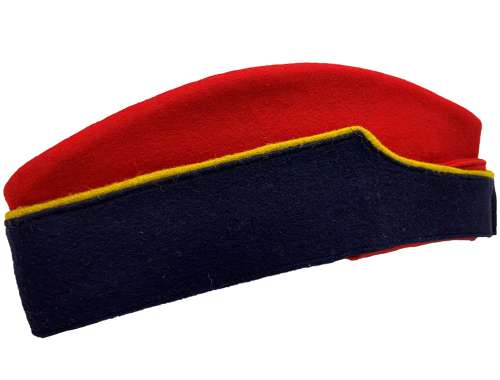 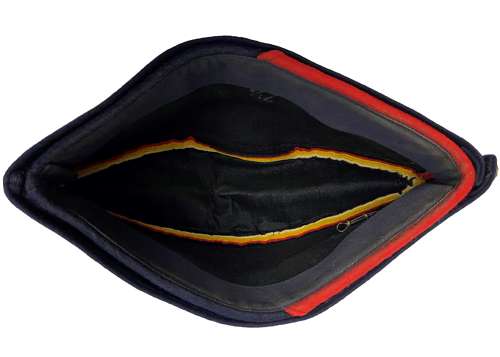 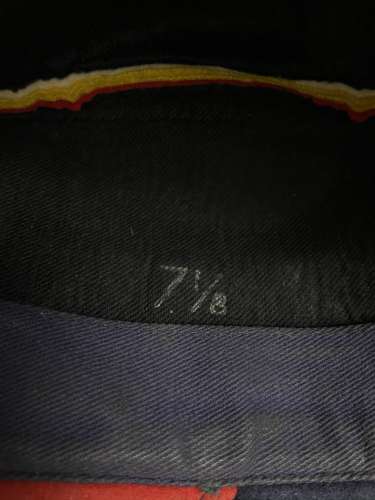 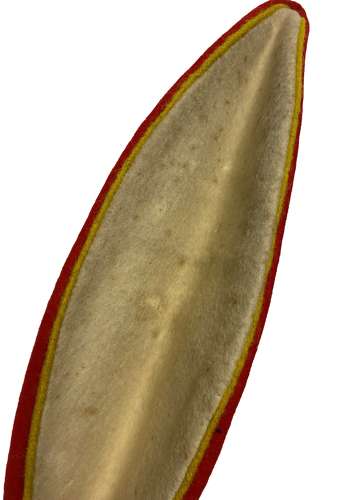 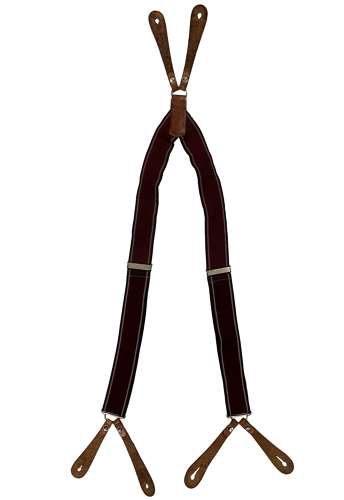 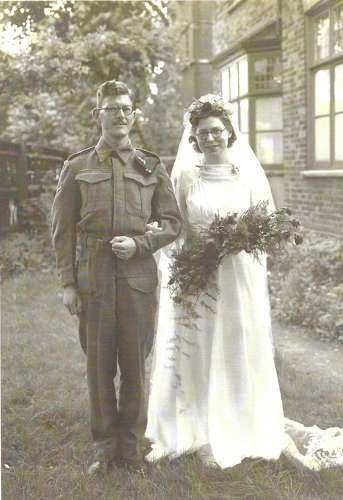 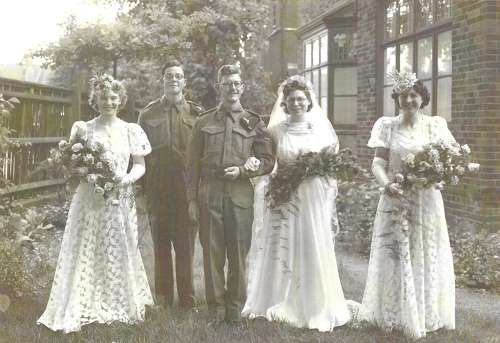 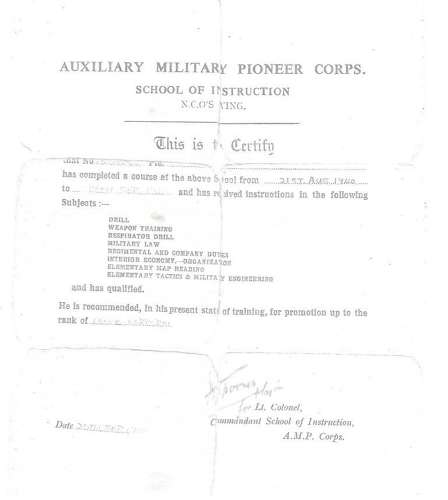 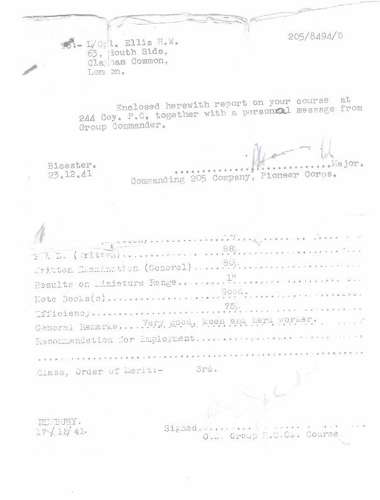 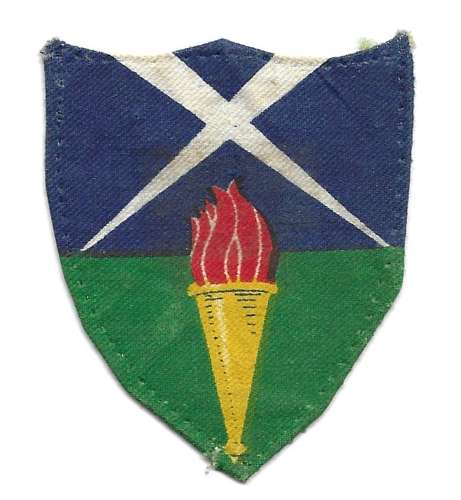 This grouping consists of a 1940 pattern battledress blouse which is complete with all of its original insignia, early Battledress Serge Trousers, a coloured R.E.M.E Field Service Cap, a pair of Braces and some paperwork.

All these items belonged to Henry Walter Ellis who served with the Pioneer Corps before transfering in the Royal Electrical and Mechanical Engineers. The paper work which comes with the grouping shows that H. W. Ellis was serving with the British Army in 1940 and appears to have carried on serving after the Second World War.

The battledress blouse is a 1940 pattern example which came into service in mid 1940. It features a full set of insignia to each sleeve including embroidered R.E.M.E shoulder titles, printed Anti Aircraft Command badges and R.E.M.E arm of service badges; all of which are positioned in a nice tight manner, typical of original wartime BD jackets. Below this is a corporal stripe which ties in with the paperwork. Inside the jacket the original label is still present although a lot of the detail has been worn away. The makers name of 'L. Silberston & Sons' can be seen as can the size of No. 4 and the War Department broad arrow. The jacket features the later style buckle and two interior pockets meaning it most likely dates from 1941. There are no signs of medal ribbons ever having been added to the jacket which would suggest that this was not worn after 1945. The overall condition of the jacket is good with the usualy signs of age and wear.

The trousers are the rare early 'Battledress, Serge' pattern which were introduced in 1940 before being replaced with the 1940 pattern in mid 1940. They feature a single pleat First Field Dressing pocket to the right hip and have had the map pocket removed from the left leg - a common choice for 'best' uniforms. Belt loops are fitted around which are fastened with brass buttons and more brass buttons are fitted to the fly and the inside edge of the waistband. The War Department acceptance stamp is still present to the interior and is surmounted by the letter 'R' which denotes 1939 as the year of issue. The trousers are in well worn condition with some staining and a small hole to the bottom of the leg as shown in the pictures.

Corporal Ellis' original coloured Field Service Cap is also included with the grouping. It is a R.E.M.E example which has been fitted with a pre 1947 collar badge in place of a cap badge. The front of the cap is fitted with standard brass General Service buttons and the size is marked to the interior is 7 1/8. The cap is in good condition and displays well with some signs of age and wear.

The grouping also includes Corporal Ellis' braces which are civilian examples. It was not uncommon for men to swap their cotton tape braces for more comfortable civilian examples. They are of typical period construction featuring long elasticated sections with adjustable metalwork and leather button tabs.

Finally is the paperwork which consists of two scanned photographs and a number of scanned documents, two of which are shown here. The photographs are clearly taken on his wedding day in about 1941 whilst still serving with the Pioneer Corps. There is also a printed Aldershot district badge which appears to be have been removed from a uniform and would suggest that Corporal Ellis stayed in service post-war as this badge was introduced in early 1948.

All in all a lovely original WW2 battledress grouping which offers the opportunity for further research. It would make a fine addition to any collection without a doubt!