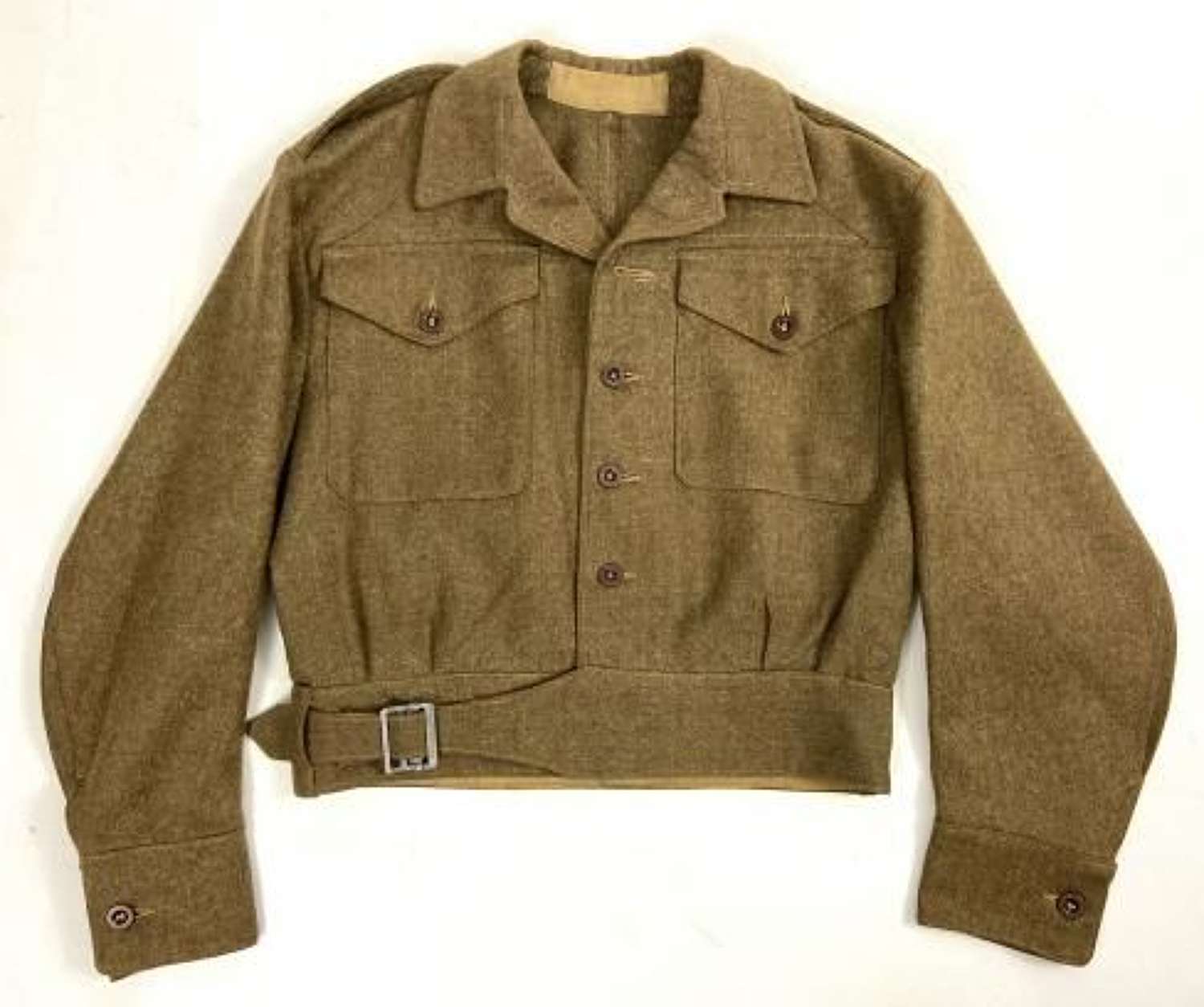 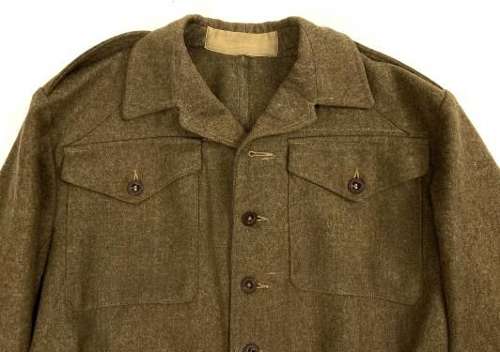 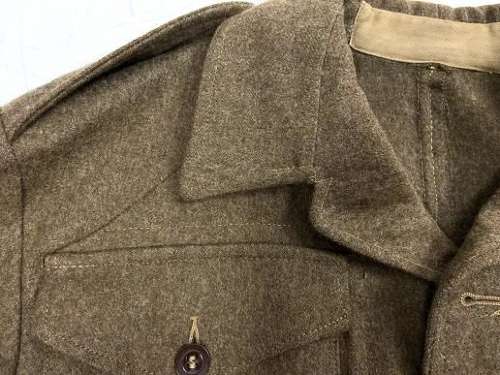 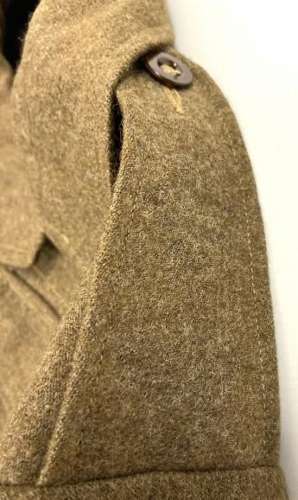 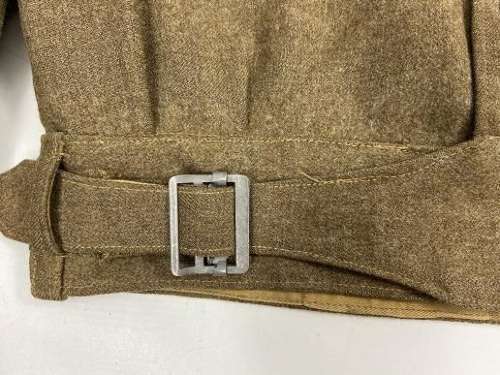 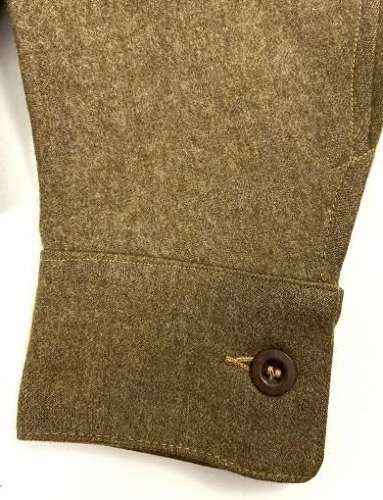 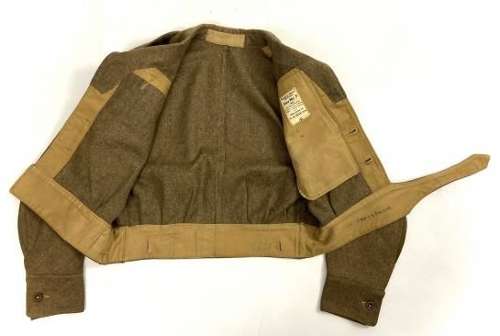 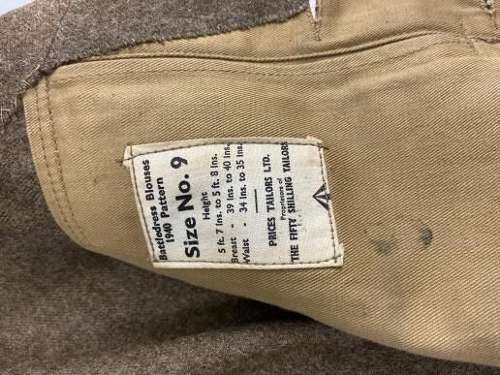 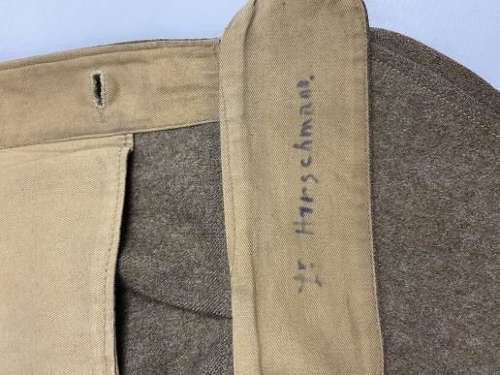 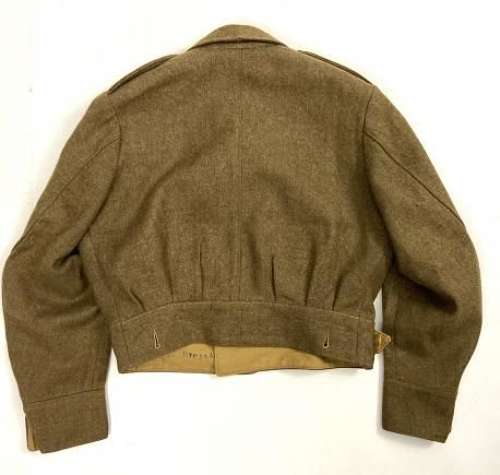 An original WW2 British Army 1940 Pattern (Austerity) Battledress Blouse which has had the collar tailored by the original Lieutenant who owned the jacket.

It was very common during the Second World War for Officers to have their Battledress Tailored to have an open collar - and this is no exception. It has clearly been done professionally and at the time and would look very smart when worn with a shirt and tie.

The jacket itself started life as a standard issue 1940 Pattern (austerity) battledress blouse. It is of the standard construction and bares the issue label to the inside pocket. The label states the size as No.9 and the manufacture as 'Prices Tailors Ltd Proprietors of The Fifty Shilling Tailors. There is no date but part of the purple ink issue stamp can be seen and the word 'OCT' is visible. The War Department broad arrow marking is also present to the bottom of the label.

Whilst the jacket it without a date, it does have the chocolate brown buttons usually associated with early manufactured austerity battledress. Whilst this isn't a hard and fast rule, it does tend to be the norm and is a good indication that the blouse dates from 1942-43.

The original owner marked his name inside the jacket as what I believe to read 'Lieutenant Horschmann'. From what I gather the original owner was in REME so it may be possible to research him.

To tie in with this, there is fading on each epaulet where two pips were previously affixed. There also appears to be traces of where badges were originally fixed to the jacket. This is without a doubt a very original jacket which was worn during the Second World War and has not been molested since.

The condition of the jacket is very good indeed and it displays very nicely. There are no signs of serious wear or damage and overall it has a very fresh feel to it.

All in all this is a very nice originally tailored jacket in very good condition. It is a very authentic example which has not been tampered with and would make a great addition to any collection.