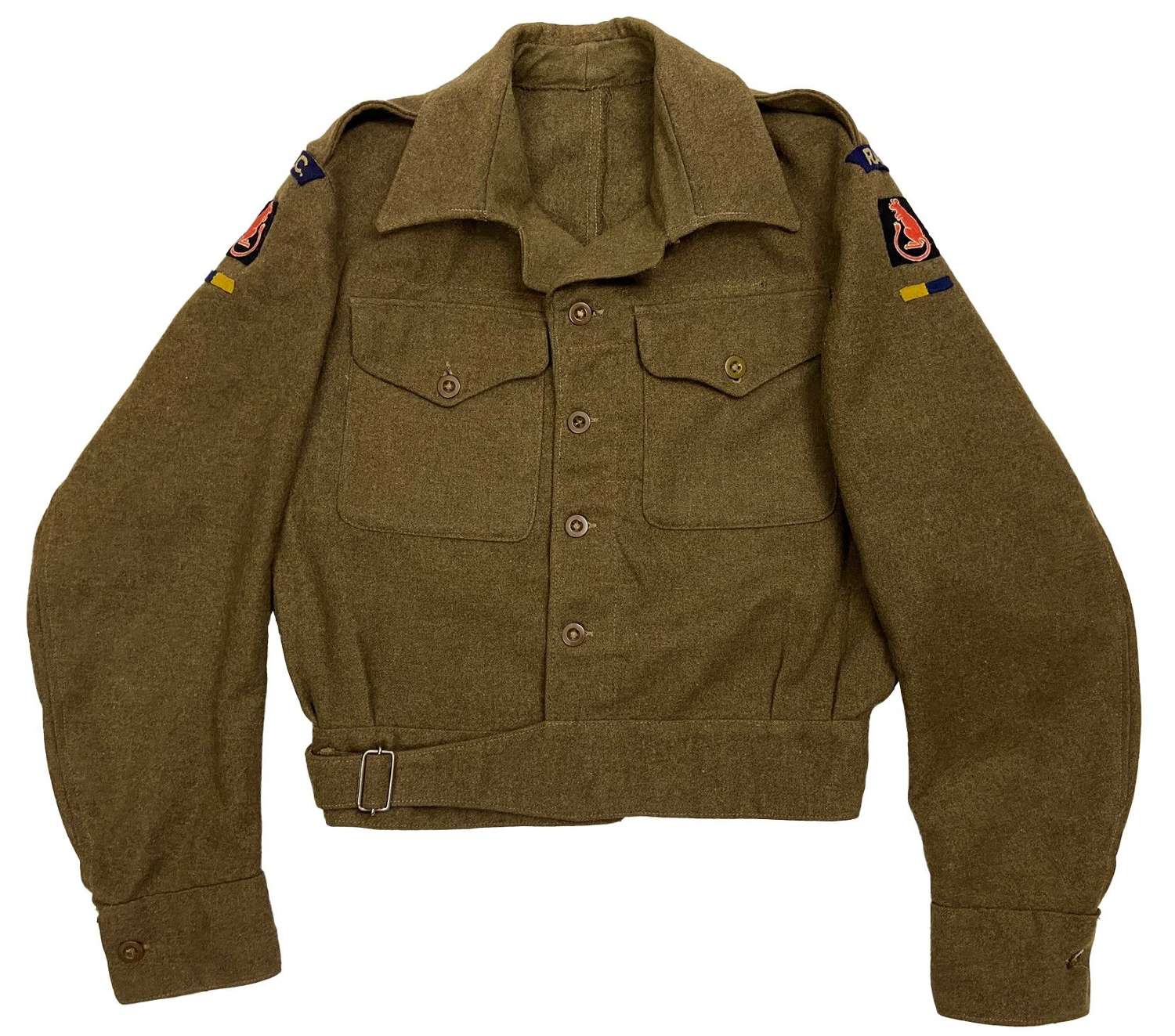 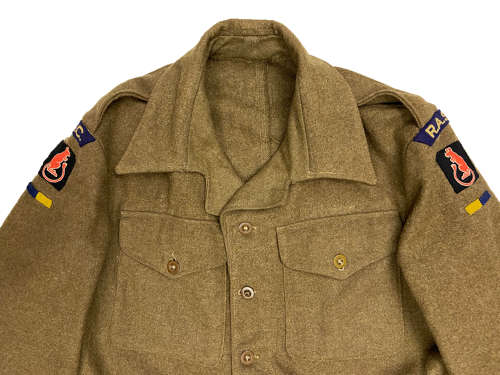 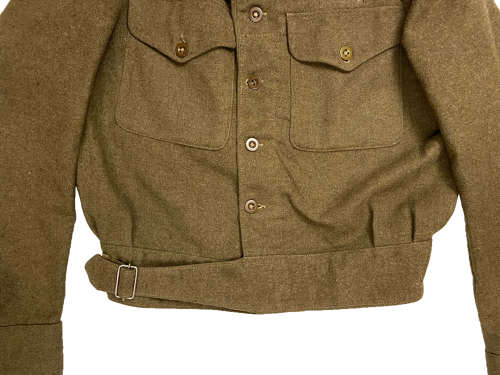 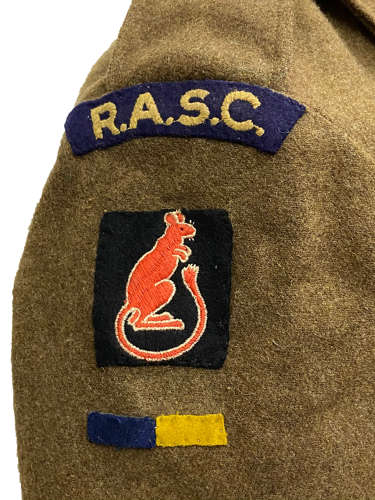 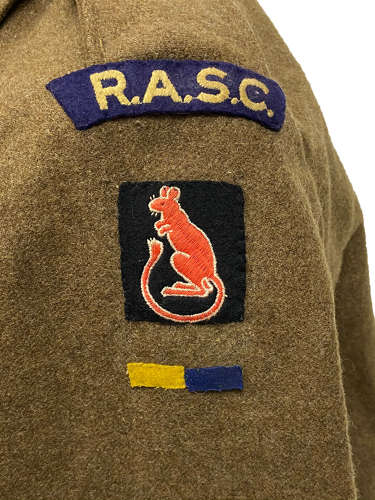 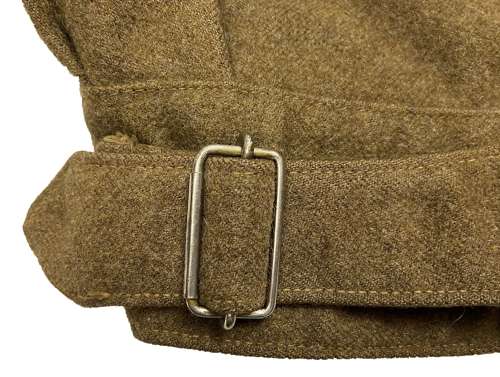 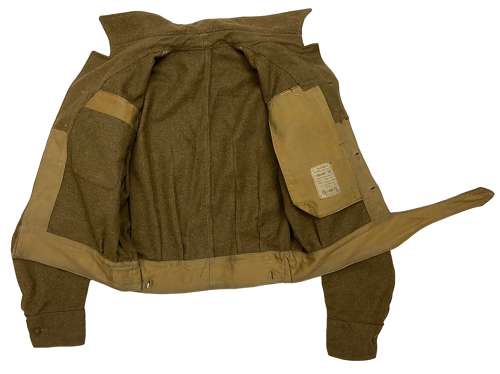 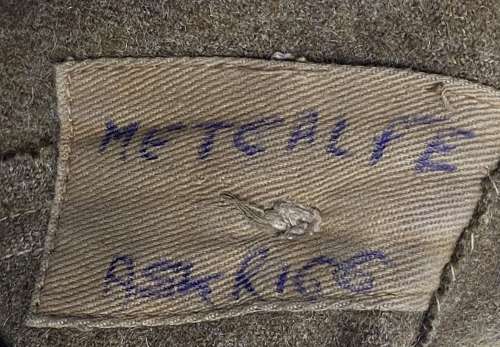 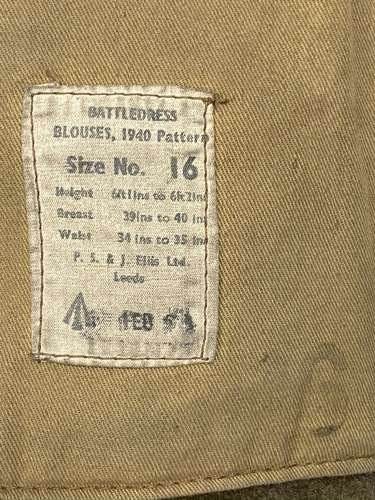 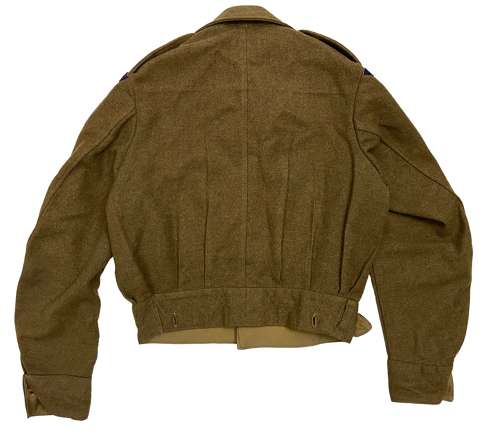 This jacket is offered to the market for the first time after being discovered recently. It features the name 'Metcalfe' and the place name of 'Askrigg' twice inside the jacket. The Metcalfe family are a well known English family who have links to the royal houses of Scotland, England and Denmark in the 10th Century. The family fought at the Battle of Agincourt and James Metcalfe was awarded land in Askrigg where he built Nappa Hall. The Metcalfe family lived at Nappa Hall for centuries. In the 1700s it was bequeathed to a nephew but it returned the Metcalfe family in 1889 and was owned by them from the 1930s until recently. This means the owner of this jacket could well have lived in the hall during the war, and if not must have lived very close by.

The jacket is a standard 1940 Pattern Austerity example which has had the collar 'faced' as was popular for all ranks when the wearing of a shirt and tie was introduced in 1944. The original owner was clearly broad chested with a narrow waist as the jacket is a size 16 which has had the waist taken in and the arms shortened. Clearly he didn't fit in with the army sizing of the day! The alterations have all been well done and would suggest that the original owner had money to spend on his uniform.

The original insignia is still present to both sleeves with embroidered Royal Army Service Corps titles to the top. Below this are 7th Armoured Division flashes which are the variation introduced in January 1944 and worn throughout the campaign in Normandy, Belgium, Holland and Germany in 1944-45. Below this are the Arm of Service badges which are made from simple felt and stitched directly onto the blouse which is typical of original jackets. There looks to be evidence of where medal ribbons were previously attached above the left breast pocket.

Inside the blouse the original label is still present and states the size as 16 (although it has been altered as previously stated). The manufacturer's name is stated as 'P. S & J. Ellis Ltd' of Leeds and the War Department broad arrow marking is present. The date is hard to read but looks to be 1943. There is also the remnants of an issue stamp which reads 'FEB' although the year isn't clear. 7th Armoured DIvision arrived back in the UK in January of 1944 and were re-equipped which could potentially tie in with this issue date.

The jacket is in excellent condition as can be seen in the pictures. It displays very well with no obvious signs of damage or undue wear. There is soiling to the lining as is often found with original period worn jackets such as this and the left breast pocket has had the button replaced with a green example which only adds to the jackets story.

A fantastic originally badged Normandy period battledress jacket which offers potential for further research. This would make a fantastic addition to any WW2 battledress collection without a shadow of a doubt!