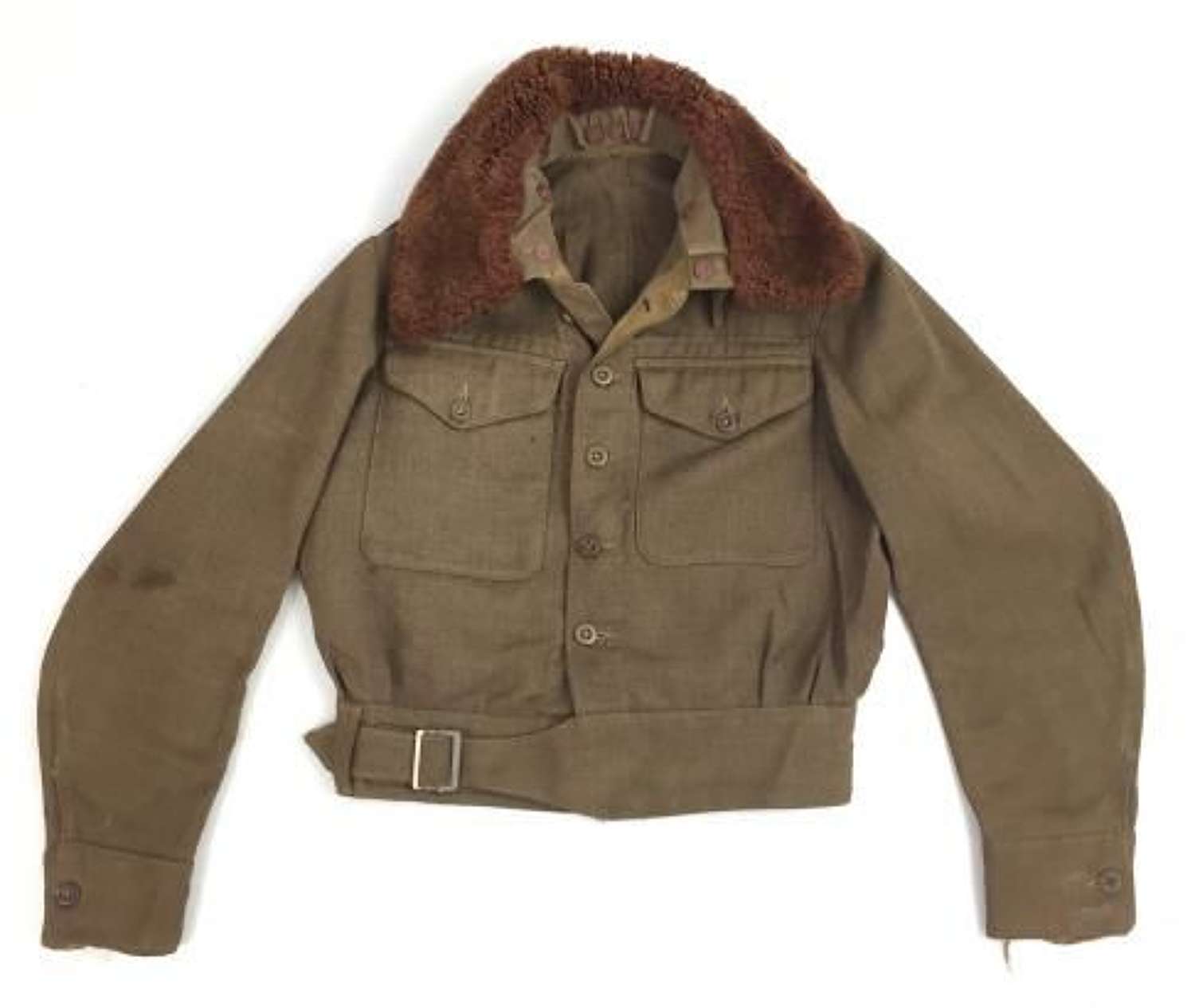 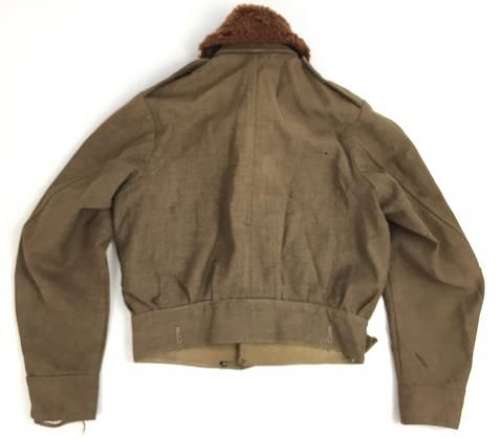 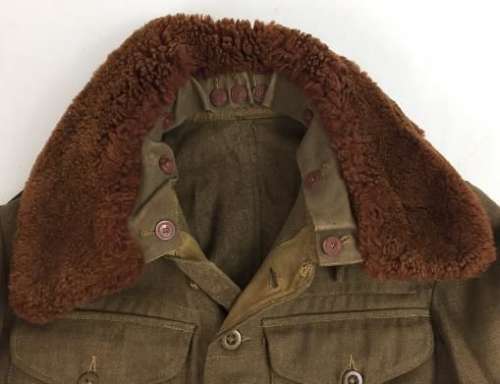 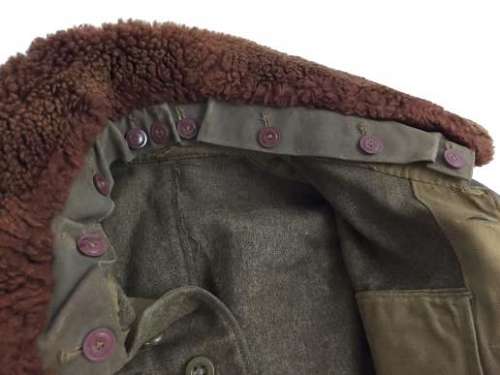 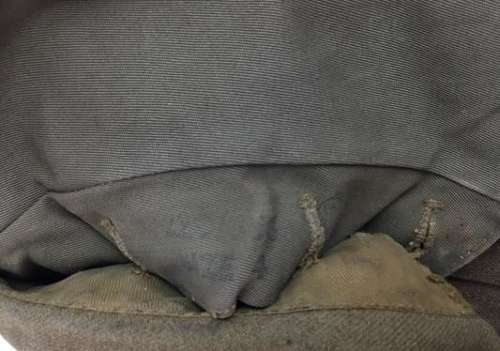 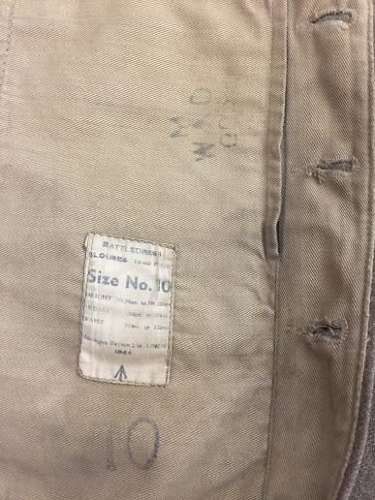 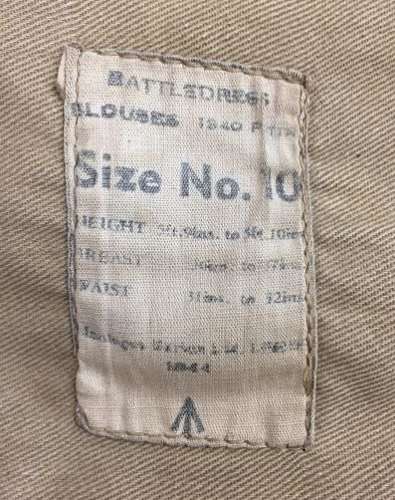 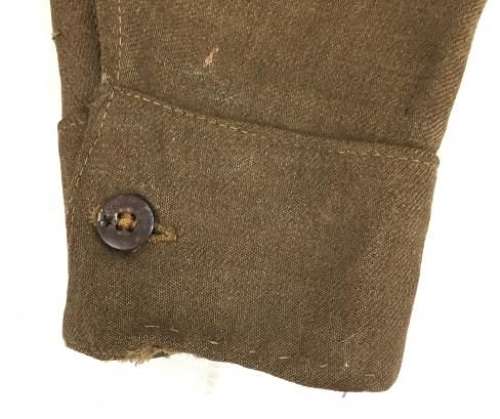 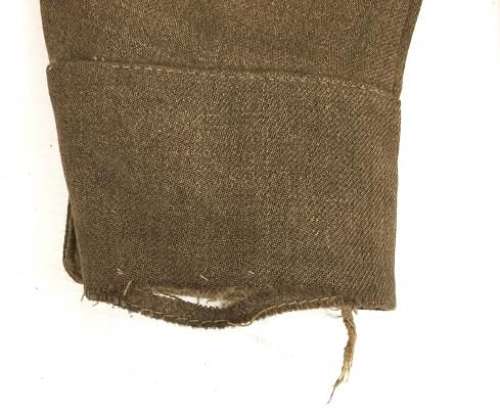 SOLD
An original 1944 dated 1940 Pattern (Austerity) Battledress Blouse which has had a Sidcot Suit fur collar attached to it.

This pattern of Battledress was made for the British Army from 1942 until the end of the War but did see use with the Royal Navy and the RAF; with the Second Tactical Air Force in particular. The collar of the jacket is clearly a period addition and has been on the jacket for a very long time. The buttons which have been added to affix the collar to the jacket are period and the stitching looks good.

Modifications such as this weren't uncommon during WW2, particularly in the winter of 1944/45 which is around the time that this blouse would have been issued. As well as this there is an original period photograph of a Fleet Air Arm pilot who has had this exact modification done to his Royal Navy battledress blouse.

The jacket itself is a standard wartime austerity pattern example with exposed buttons and a chromium plated waist belt buckle. It shows plenty of signs of wear and use all consistent with age and has had some of the original buttons buttons replaced with mis-matched but period buttons. This adds to the jackets authenticity as is shows that it was worn during this period and ties in with the additional collar.

Inside the jacket the original label is present which states the size as No.10 and the year of manufacture is 1944. Above the label the original War Department issue stamp is present and is surmounted by the letter 'M' which is the correct letter code for 1944.

The collar is an RAF issue example which bares the 22C stores code and 'Size 4' stamp to the rear. It appears to be in good condition with the fur element looking completely intact.

The overall condition of the jacket is reasonable for its age but as mentioned above it is a well worn item and has wear and signs of age consummate with this. Please study the photographs as they form part of the description.

This really is a standout battledress blouse. Originally modified items such as this rarely survive and are unlikely to be offered onto the market today. Whilst it is impossible to prove the exact provenance of the jacket, it is clearly a period modified item and typical of those found in the winter of 1944/45 and would therefor make a brilliant addition to any Second World War collection.