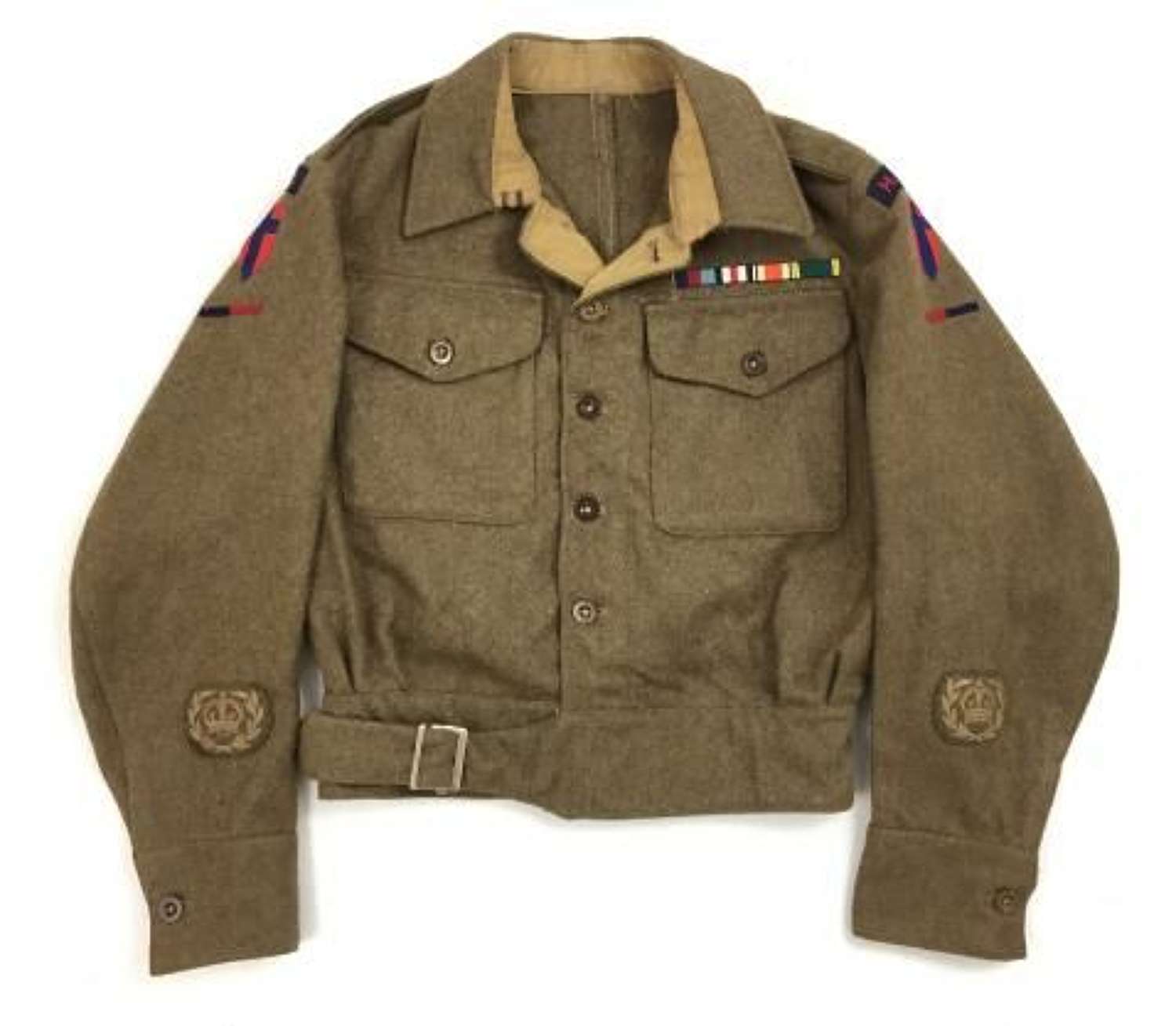 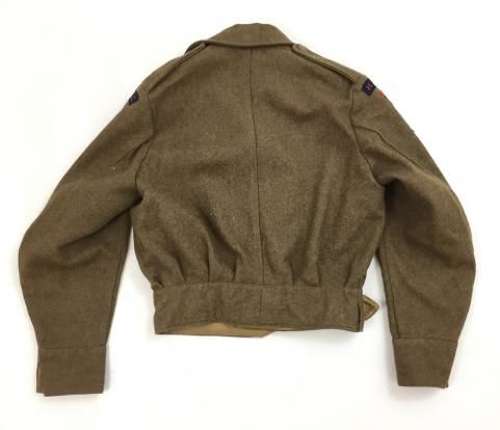 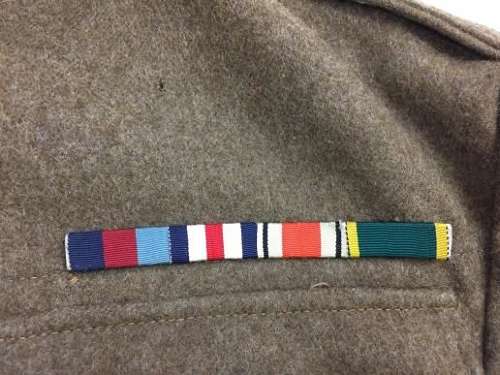 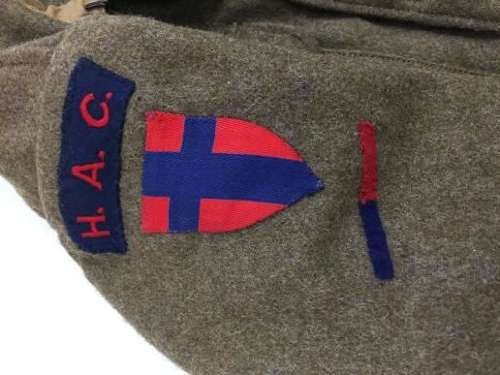 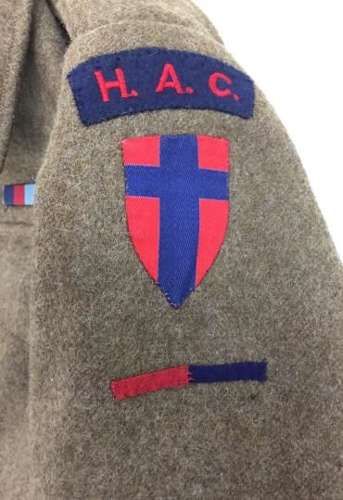 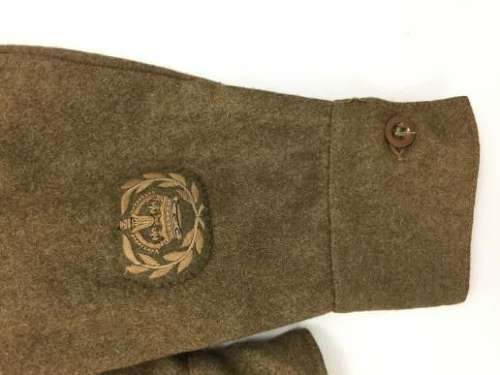 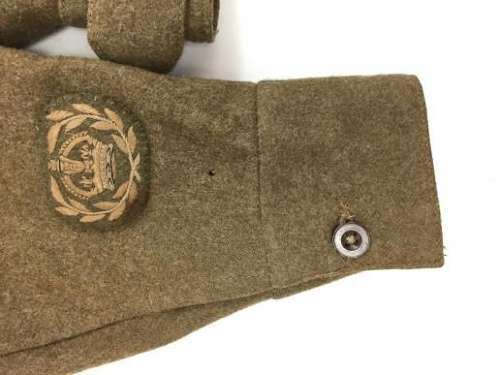 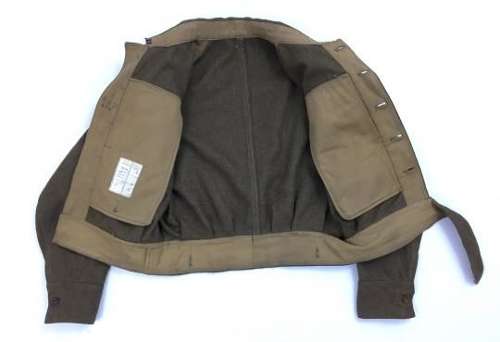 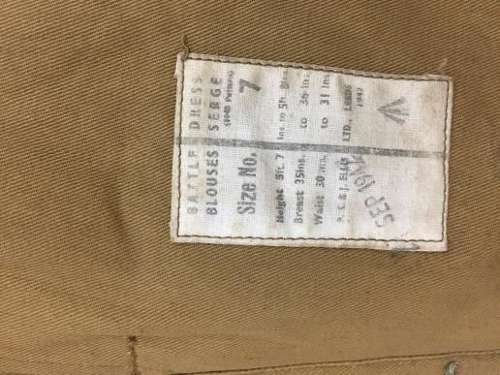 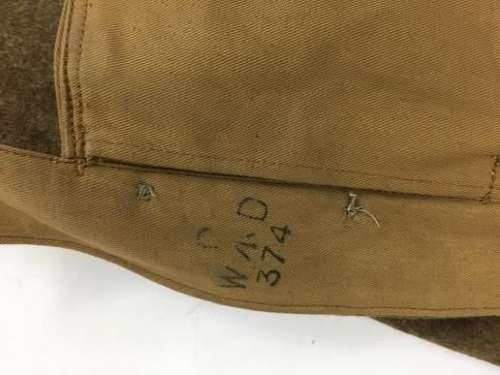 SOLD
Here we have an amazing original Normandy campaign Battledress blouse for the serious collector. This very original BD jacket has been in a collection for 30 years and is 100% genuine. The original insignia is to a Warrant Officer of the 86th Honourable Artillery Company (Heavy Anti Aircraft) who landed on Juno Beach as part of 21st Army Group on D-Day.

The 86th HAC were responsible for beach defence on the 6th of June 1944 and was equipped with 3.7" guns. On the 8th of June the Regimental Headquarters was set up at the Chateau at Bény-sur-Mer. 86th are listed as staying with 21st Army Group until the end of hostilities in Europe where it then went on to become part of the British Army of the Rhine. The regiment was completely demobilised by April 1946 meaning that the last date this battledress was worn has to be before that date.

This fine battledress comes complete with an equally fine set of original insignia to each sleeve. Embroidered Honourable Artillery Company shoulder titles can be found at the top of each sleeve whilst below this are printed 21st Army Group (Line of Communication) patches. Original Royal Artillery arm of service stripes can be found below this which are made up of two pieces of felt stitched directly onto the sleeve as was common during this period. The bottom of each sleeve feature Kings crown Warrant Officers badges, sometimes referred to as 'Company Sergeant Major'. All the insignia is in matching pairs and is clearly original to the jacket.

The jacket comes with its original medals still affixed to the chest above the left-hand breast pocket. These are the 1939-45 Star, France and Germany Star, Special Constabulary Medal and King George VI Efficiency Medal.

The Efficiency Medal was instituted in 1930 for award to part-time warrant officers, non-commissioned officers and men after twelve years of efficient service on the active list of the Militia or the Territorial Army. This ties in well with both the rank and the fact that 8th HAC were TA before the war.

Interestingly the Special Constabulary Long Service Medal also appears on his tunic which would suggest that he served as a special constable during the interwar years as well as being in the TA.

The original label can be found inside the jacket stitched to inside pocket as is usually the case with British made battledress jackets. The label is interesting as it states 'Battledress Blouses Serge, 1940 Pattern' and doesn't mention that it is an austerity pattern. As this is an early example it is likely that the manufacturer was still using up old stock labels. The manufacturer of this blouse was P.S & J Ellis Ltd, Leeds' which is a rare manufacturer. The label clearly bares the 1942 date as was at the War Department broad arrow stamp. As well as this there is an issue stamp for September 1940 making this a very early austerity pattern blouse.

As well as the label the jacket features a War Department arrow which feature the broad arrow. This is surmounted by the letter 'O' which is correct for a 1942 issued item.

The overall condition of the blouse is very good as can be seen in the photographs. It is a very clean battledress and the nap of the serge does not show much in the way of wear and use meaning it still looks very fresh today. There are someone signs of wear around the collar which are to be expected from a used issued item and there is one very small moth hole on the sleeve as shown in the pictures.

Altogether this is a truly stunning Normandy period battledress which has survived in fantastic condition. The unit saw action on D-Day making this a must have for the serious Normandy Campaign collector.