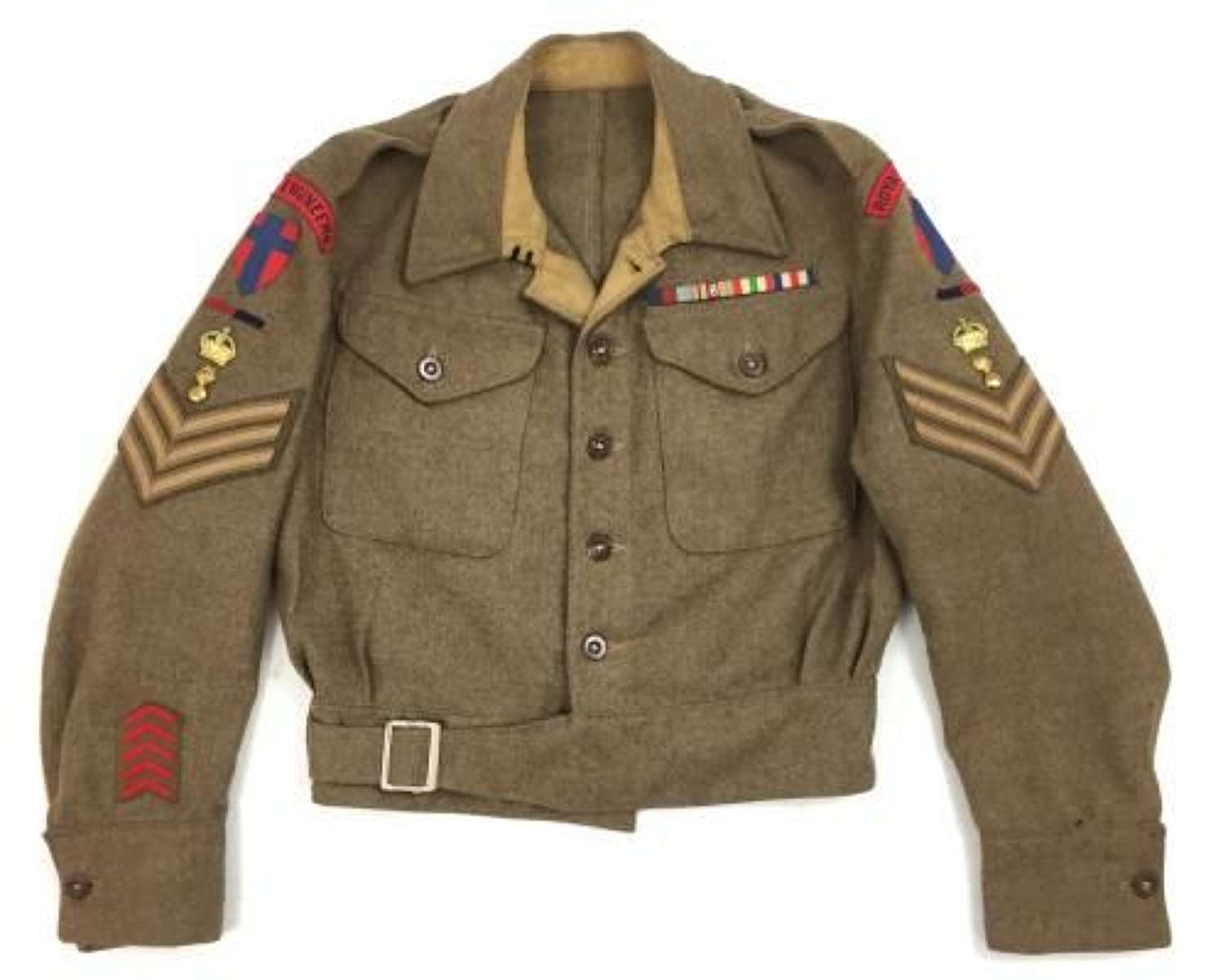 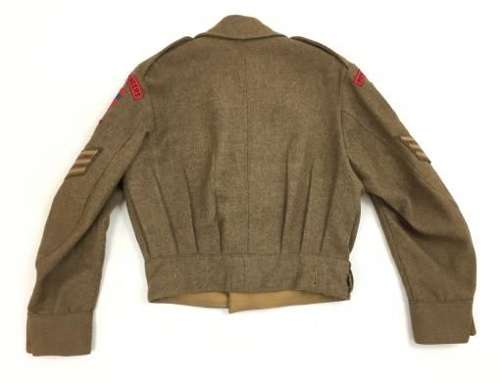 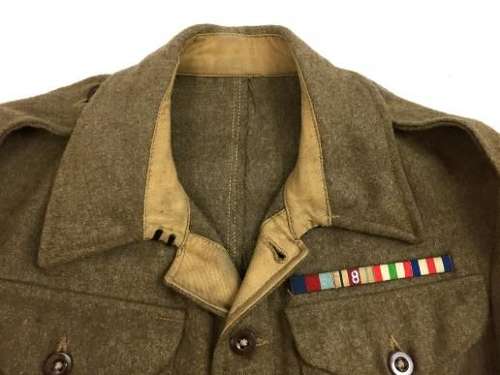 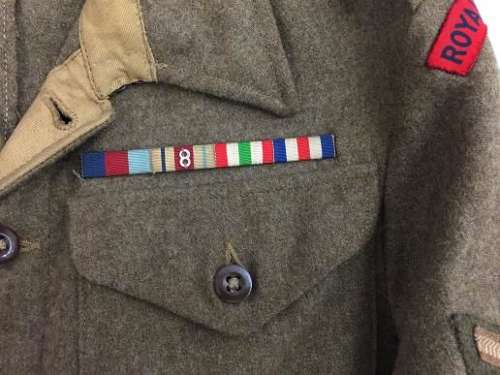 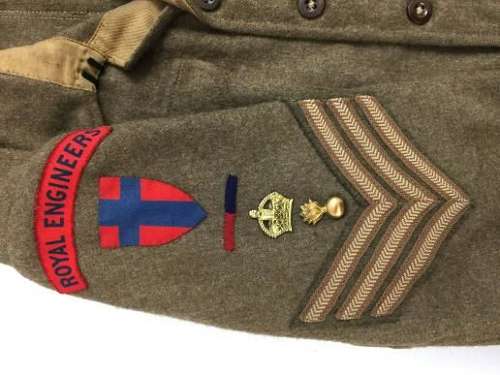 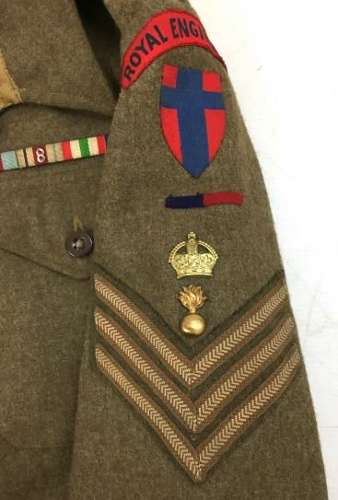 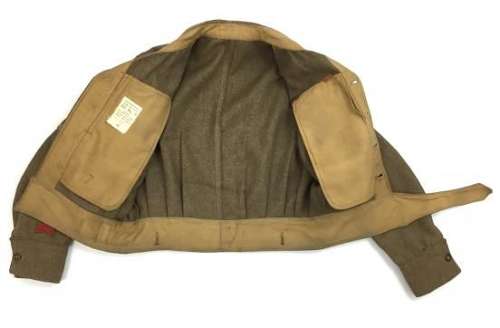 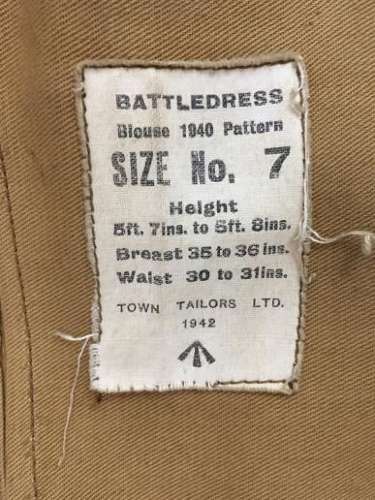 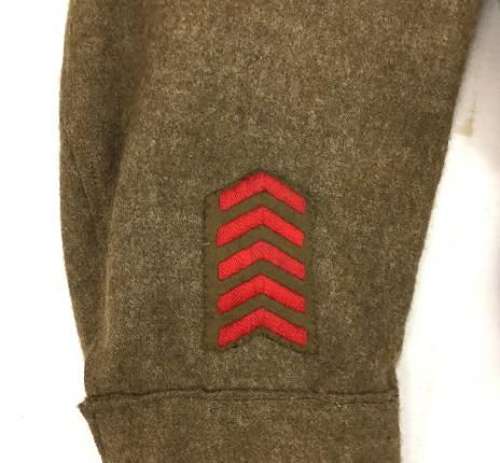 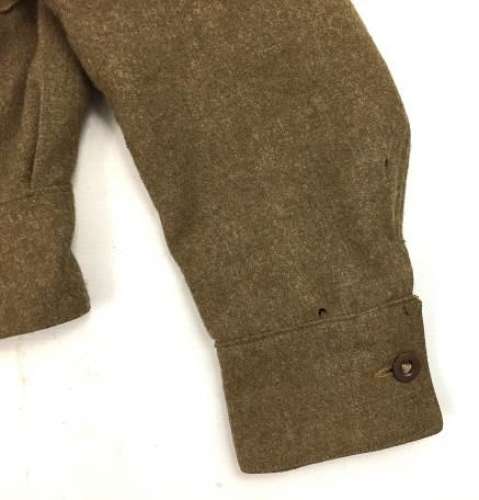 SOLD
A very original Normandy period 1940 Pattern (Austerity) Battledress Blouse clearly dated 1942 and with all of its original insignia.

This Blouse came to me along with two similar ones from an old collection and this is the first time it has been offered on the open market.

The original owner served with 21st Army Group which was Bernard Montgomery’s HQ during the Normandy Campaign and the subsequent push into Belgium, Holland and finally Germany.

The jacket itself is a typical early production 1940 Pattern (Austerity) example. It features the chocolate brown buttons which are often associated with early production models and two inside pockets which was a feature of the earlier none austerity pattern and was phased out by 1943.

The Blouse comes complete with its original insignia which comprises of wartime economy printed ‘Royal Engineers’ shoulder titles, printed 21st Army Group (Loc) divisional patches. Below this a felt Arm of Service is present on each sleeve. This is made of two pieces of small felt which is tacked directly onto the jacket which is typical of wartime blouses and another good indicator to its authenticity. Then original sergeants stripes are surmounted by both the Royal Engineers flaming orb and a kings crown, both in brass and signifying the tank of staff sergeant. The lower portion of the right sleeve features 5 long service stripes which ties in nicely with the rank and medal ribbons.

The medal ribbons above the left breast pocket give an insight into the original owner. Undoubtedly a career soldier he may well have been a regular before the war and could have possibly been at Dunkirk. Whilst it isn’t possible to prove this we do know he served in the 8th Army in the Deseret, went through Italy and then served in France and Germany, most likely with 21st Army Group. The medals are mounted on a thick piece of brass which is very period correct and was clearly done at the time.

Inside the jacket the original label is still present and is extremely bright a clear. It states the size as ‘No.7’ and the the manufacture as ‘Town Tailors Ltd’. The War Department broad arrow is also on the label above which is the 1942 date.

The overall condition of the jacket is stunning. It has a very fresh appearance with the bap of the serge being very good and all the insignia being very bright. The label is very good as previously mentioned and the lining is clean. The only flaw I can find with the jacket is a small hole just above the left cuff. I have included a picture of this.

This Blouse would be an asset to any collection but would be of particular interest to somebody who collects Normandy or similar 1944 related Battledress. The condition is stunning making this a real collectors piece.