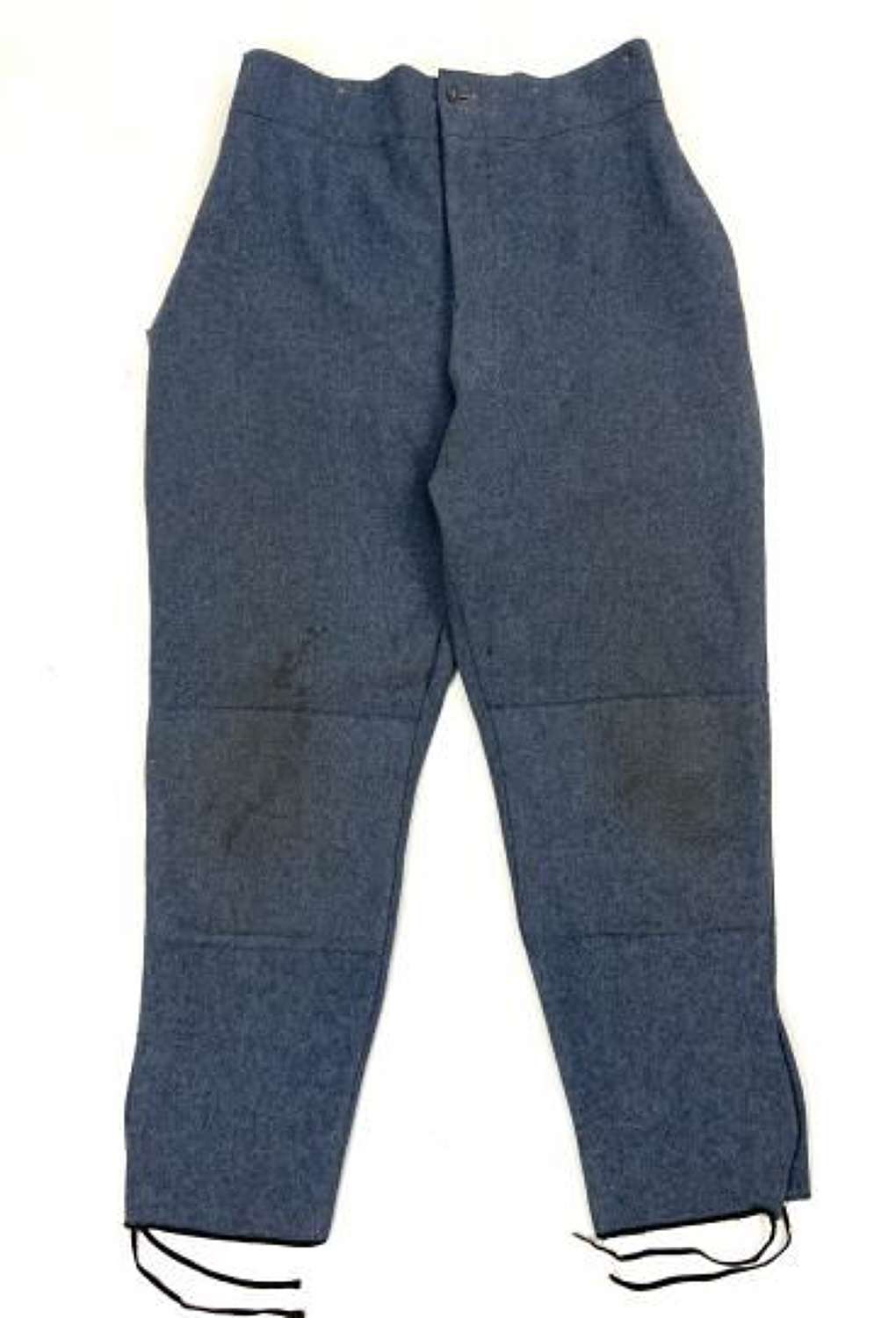 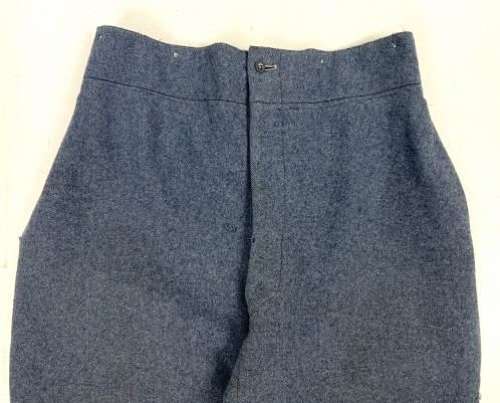 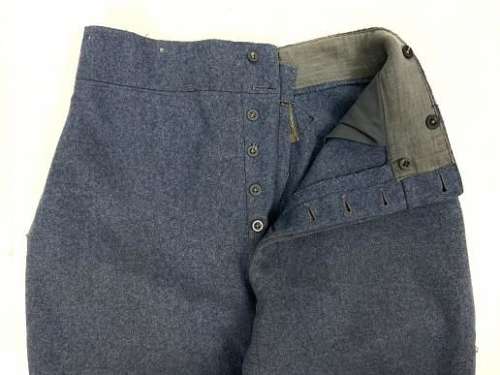 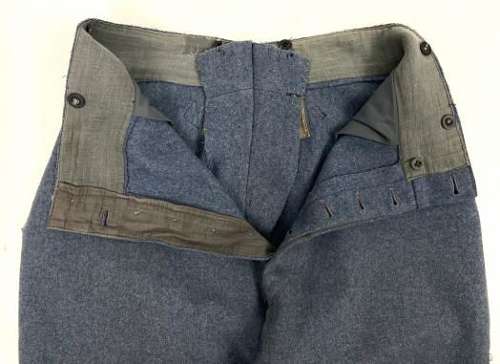 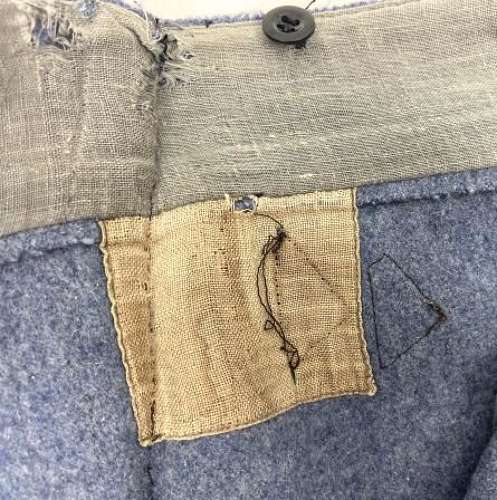 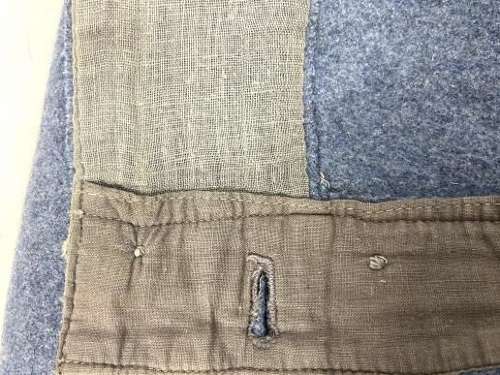 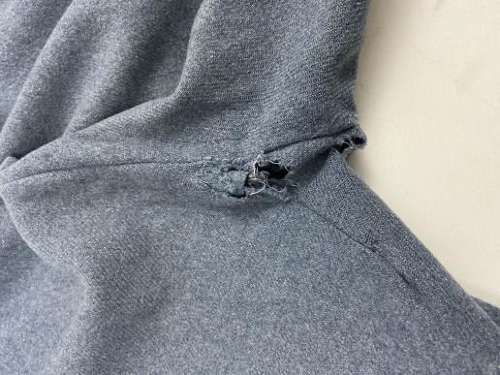 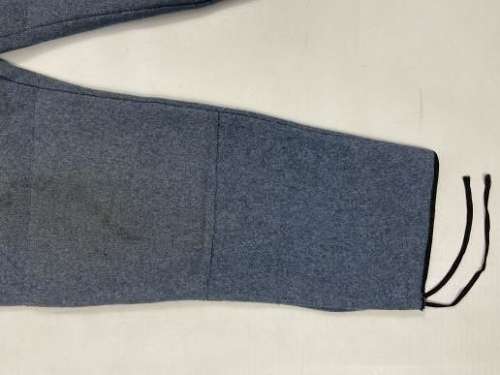 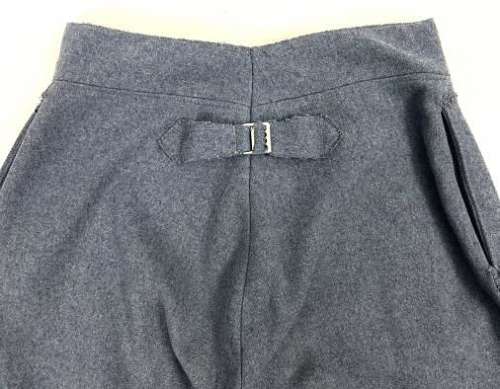 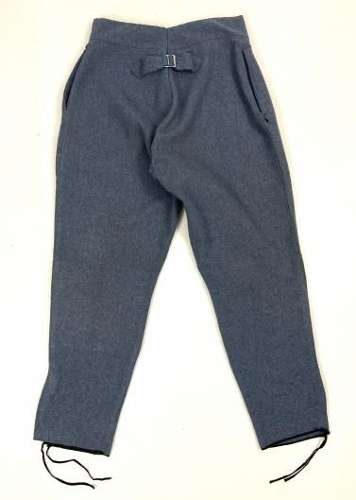 These scarce trousers are the mid to late war pattern used by the rank and file of the French army during WW1. They are cut from a coarse yet soft horizon blue wool which is typically French. They feature the re-enforced knees specific to the this pattern as well as ties to the bottom of each leg opening. The rear of the trousers features the correct cinch-back belt and buckle arrangement and slash pockets can be found on either hip.

The trousers are lined in the waist and fly with linen. This material is typical of the era and fell out of use after the end of the Great War, which ties in nicely with the age of the trousers. The reverse of the cinch-back on the rear of the trousers is also lined with matching material.

The trousers feature a button fly and brace buttons. These are all grey plastic example which match but may not be original to the trousers - I don't know. I think it is quite possible that these trousers have spent some time in a costume house which may explain this. The pocket bags have also been replaced with a more modern material which again ties in with this theory. Obviously this does not affect the way the trousers display but has been taken into account with the price. I have a couple more photographs which are available upon request.

The trousers have also been taken in with the original material being folded over. This means they could easily be let out to a larger size and appear to have been changed in size once or twice. This again would suggest that they have been used for costume at some stage.

The trousers are a good wearable size and would fit a mannequin well. They are cut short in the leg as they are worn with puttees some measure shorter than a normal trousers leg by quite a lot. When laid flat they measure -

The condition of the trousers is good and they display well, as can be seen in the pictures. They have seen plenty of wear however and do have various stains. There is no serious damage and they appear to be structurally very sound. The main issues I have found with them is some ripping to the top of the opening of the pockets, A whole to the crotch (not visible when displayed) and a small area about an inch long where the stitching has come loose along the inside leg seam. This could easily be stitched back together and all the issue have been taken into account when pricing this scarce pair of First World War trousers.

Whilst not the finest pair of Great War French trousers to ever be offered on the market, these are still without a doubt a rare pair of original trousers. They have a couple of issues which are all reflected in the price but all in all are a sound pair of trousers which actually display very well indeed!

These would make an excellent addition to any Great War collection without a shadow of a doubt!