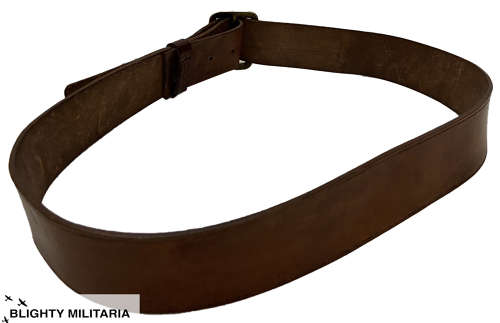 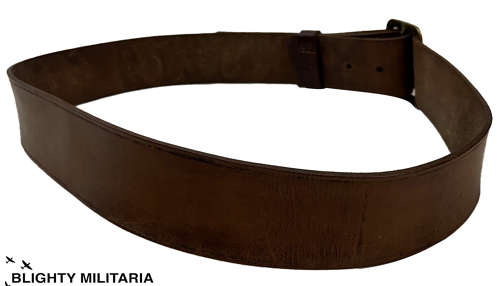 An original 1903 Pattern British Army leather belt clearly dating from the first half of the 20th Century.

This belt was originally part of the 1903 pattern leather equipment which came into issue before the Great War. Aside from a short period of six years from 1917 to 1923 this belt stayed in service well into the post Second World War Period. It is often seen worn as a trousers belt in both World Wars but was also worn over the Service Dress tunic by mounted troops, Military Police and others. The Home Guard used this belt during the Second World War and it formed part of the Home Guard webbing set.

This particular example features no date or maker markings. However, the leather and brass work are both very consistent with dated examples from 1917 and 1940 in my collection and I am very confident that this dates from the same period. The original leather loop which holds the tail of the belt is still present which is so often missing on examples found today.

The belt has a number of holes meaning it could fit someone from a 34" to a 39" waist.

The condition of the belt is good as can be seen in the pictures. It shows only limited signs of age and use and displays well. There is some cracking around the first hole but it all functions as it should.

Altogether a nice example of a 1903 belt in a good, wearable size.