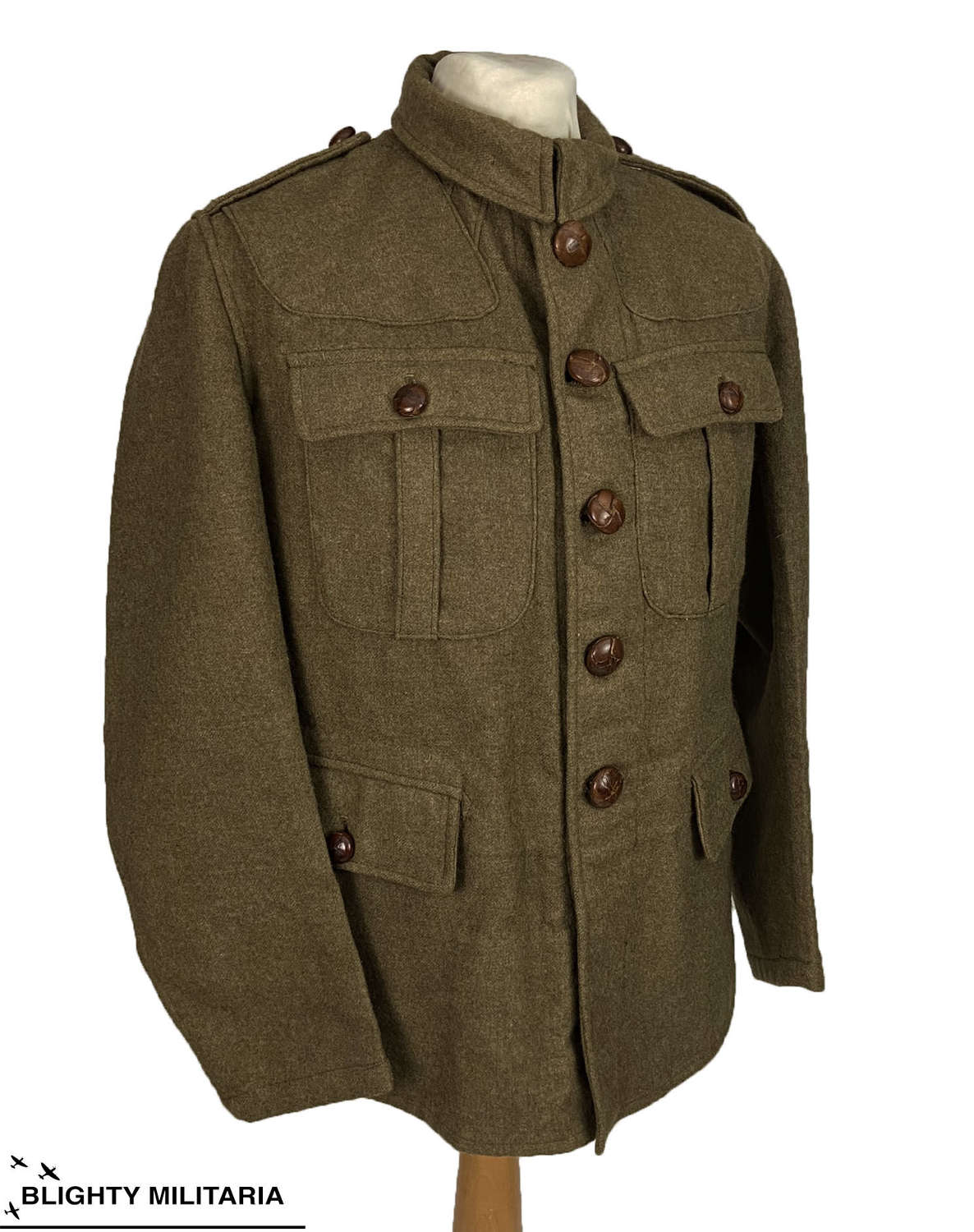 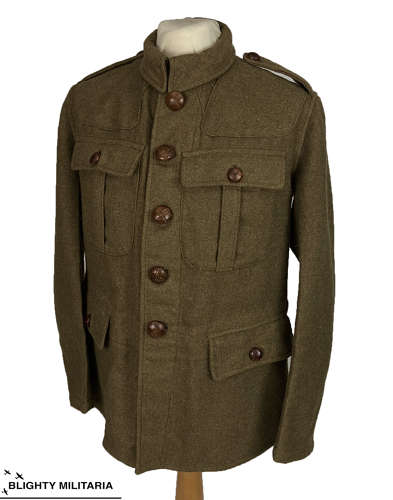 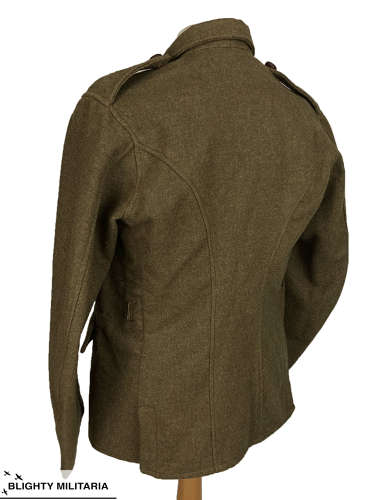 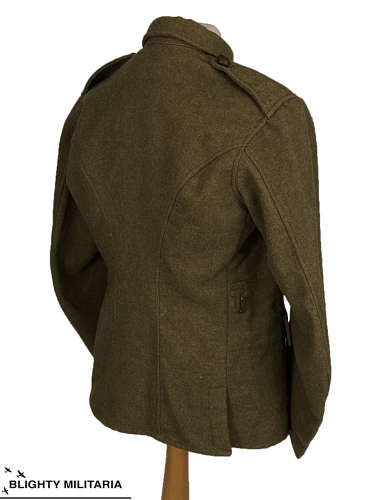 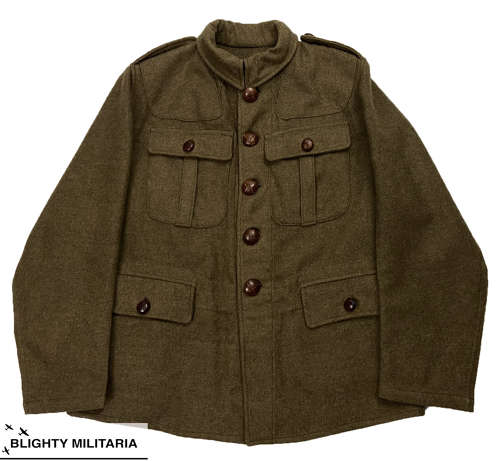 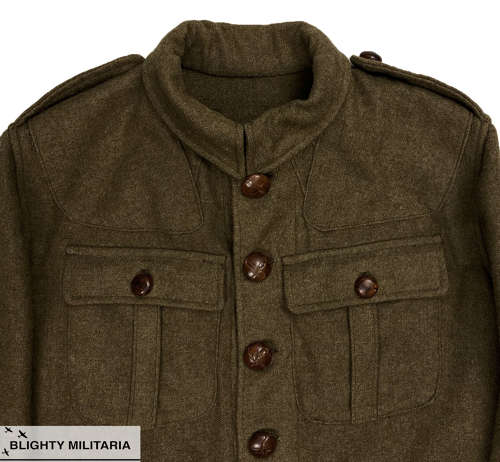 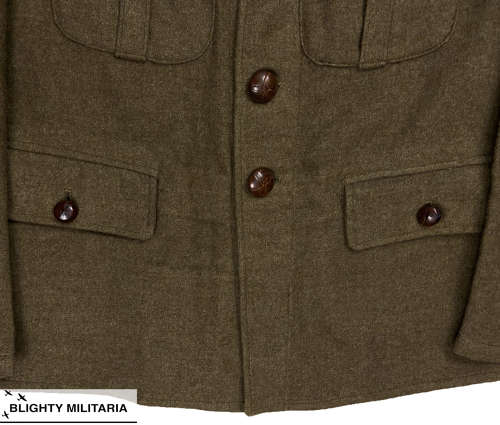 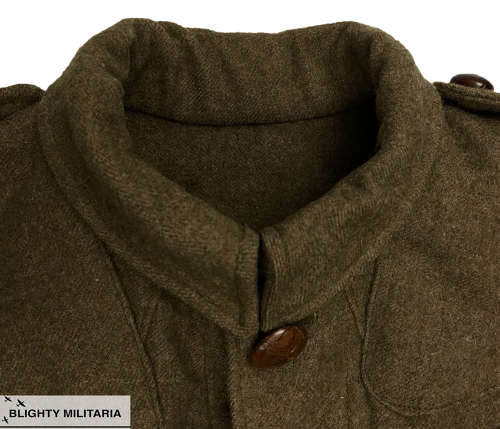 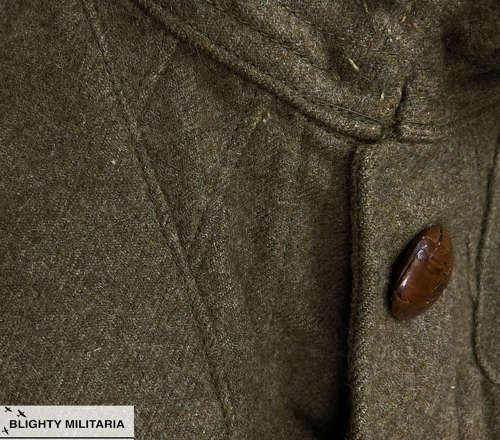 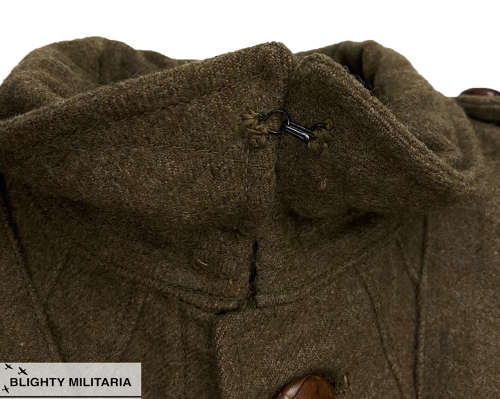 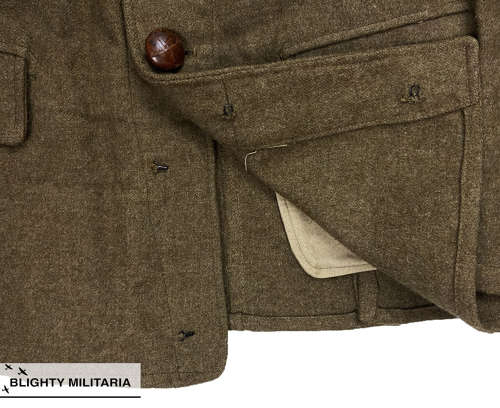 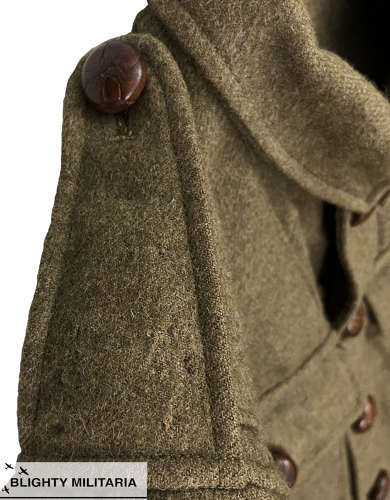 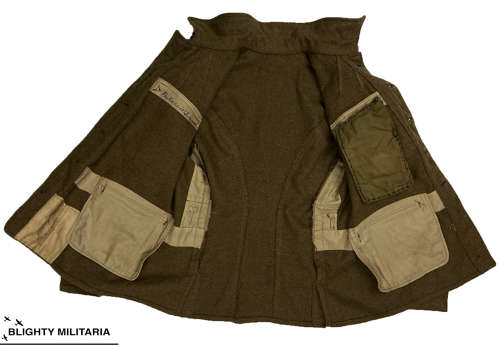 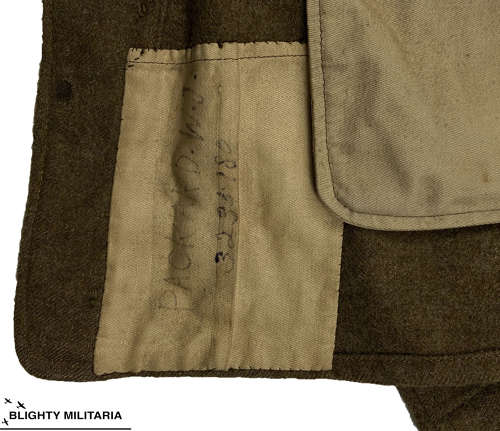 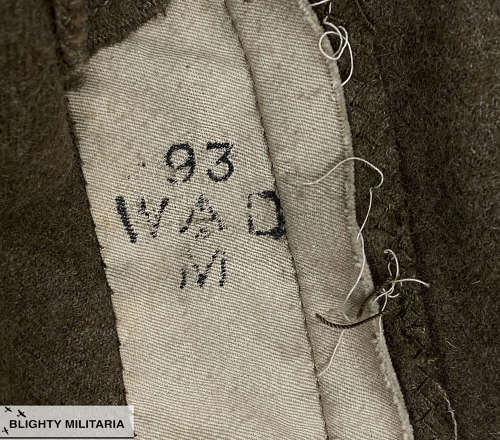 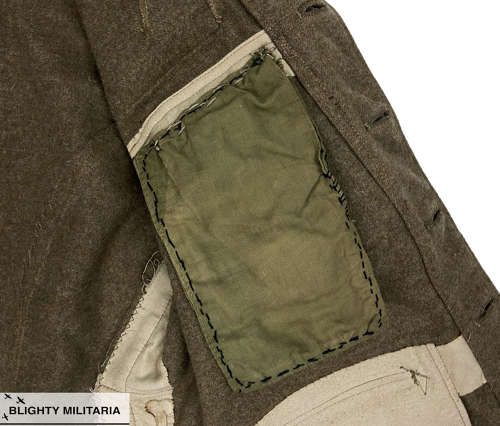 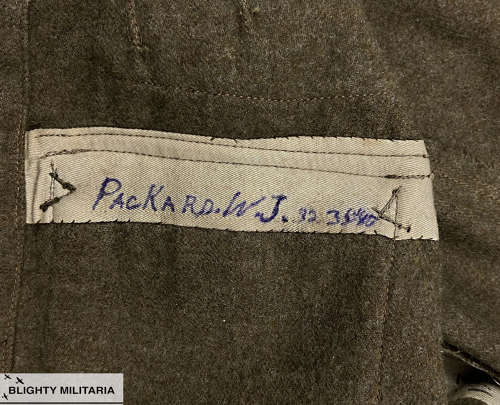 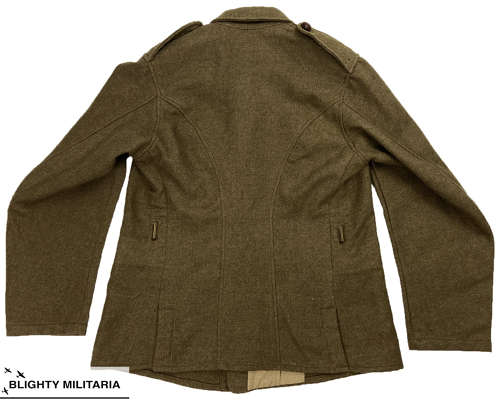 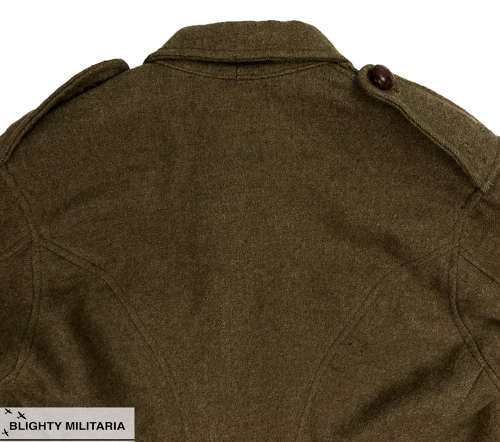 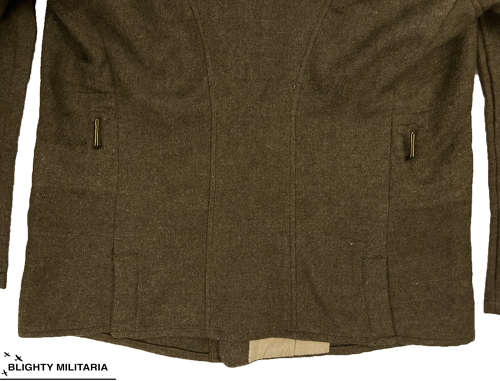 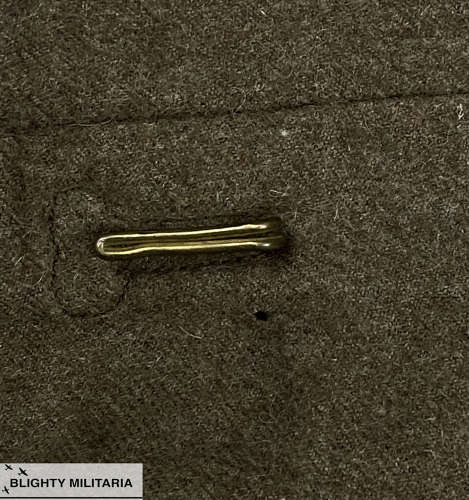 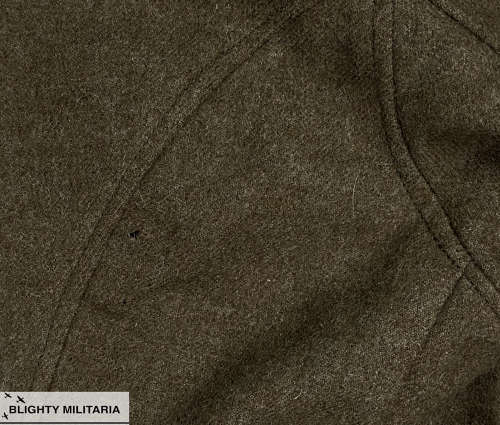 A scarce original British made 1902 Pattern Ordinary Rank's Service Dress Tunic which dates from the Great War and is in very good condition.

This particular example was issued to A Canadian soldier of the 2nd C.O.R who enlisted in May 1918. He was 3235180 William John Packard of Shanty Bay, Ontario. He was a farmer born in 1894 and he arrived in England in August 1918. He was made a corporal in July of 1918 and was subsequently diagnosed with mumps leaving him in hospital and then rest camps such as Bramshott and Whitley before being discharged after the cease of hostilities.

The tunic itself is an excellent example of a Great War 1902 tunic of the pattern which was introduced in 1915 to replace the simplified pattern. The pattern returned to the pre war specification but has a single piece of material to reinforce the breast pockets, rather than the three pieces employed on earlier tunics. The jacket is made from a khaki green coloured serge wool and features a stand and fall collar, under which are twin darts - Another trait only found on Great War period tunics. The underside of the collar has had a hook and eye added to it which makes the collar sit in a neat manner. Two more hooks have been added to the skirt which are again for smartness and are illustrated in picture 11. The original owner has fitted leather 'football' buttons to the tunic which would have originally been fitted with brass British General Service buttons. There is evidence at the epaulettes of where badges were fitted previously and brass belt hangs are fitted to the waist.

Inside the jacket features lining material and pocket bag of white cotton which is a trait of wartime jackets as this was replaced with khaki coloured cotton in the post-war period. The original War Department acceptance stamp is also present and is still present and is bright and legible. It is the style used in the Great War which was superseded in 1918 with a letter below the broad arrow. In this instance the letter is 'M' which denotes Marylebone as the depot and suggests that the tunic was made by a London manufacturer. The original owner has marked his name and serial number in ink to the First Field Dressing pocket as well as to the pocket reinforcing stripe. He has also added a crude interior pocket which is a nice period detail.

The tunic is in excellent condition for its age and it displays very well. It only shows limited signs of service wear and is very fresh overall. There are a couple of very small holes which are illustrated in the pictures but on the whole the condition is good. It is a vintage item which may have small flaws commensurate with age so please take time to study the pictures before purchasing.

The tunic is accompanied by some photocopies of the original owners military service records to aid in further research.

A great example of this pattern of tunic which is in nice condition. It would make an excellent addition to any collection without a doubt!