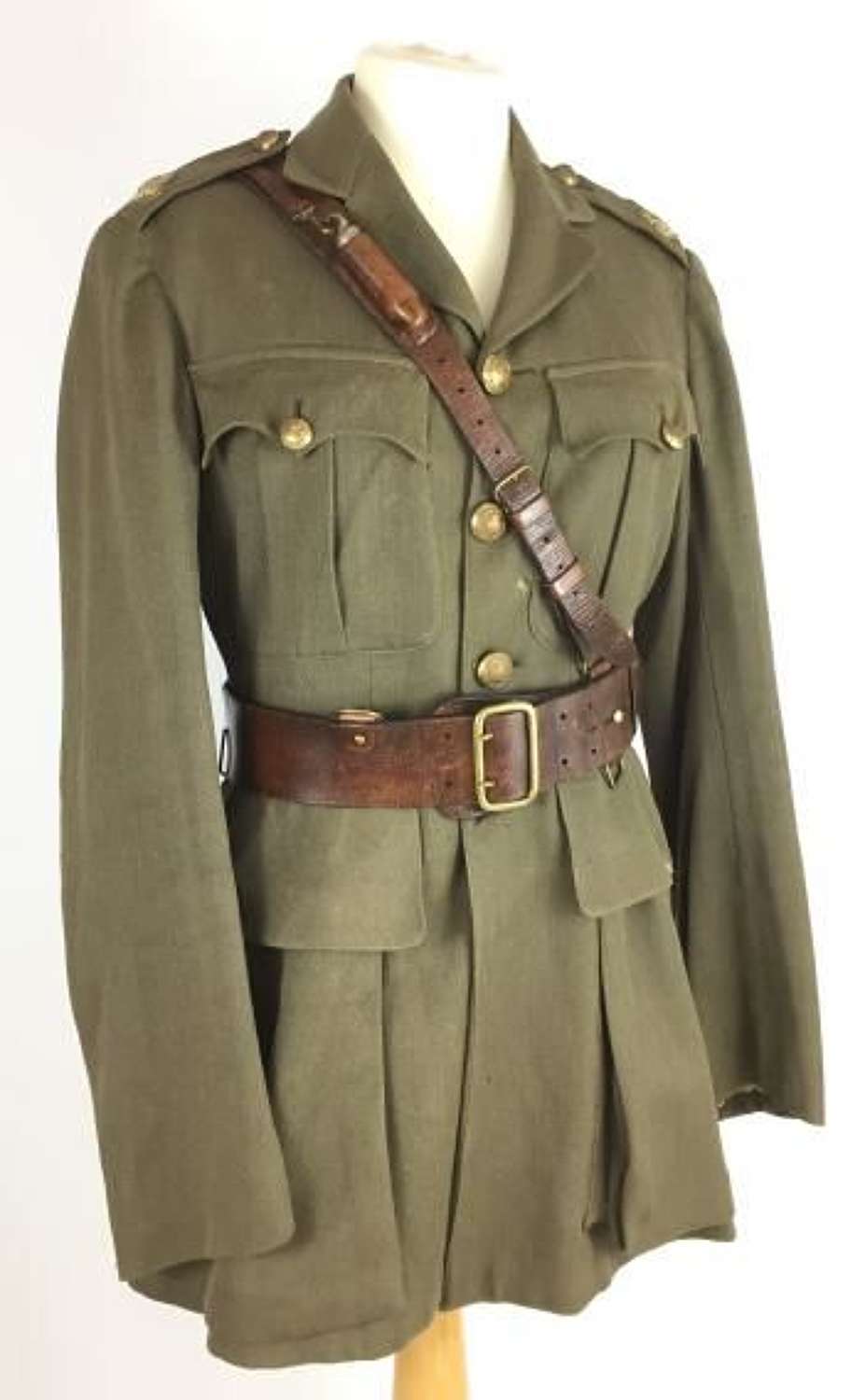 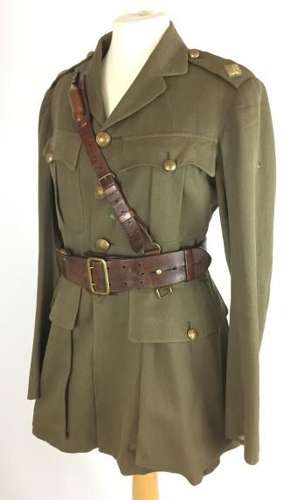 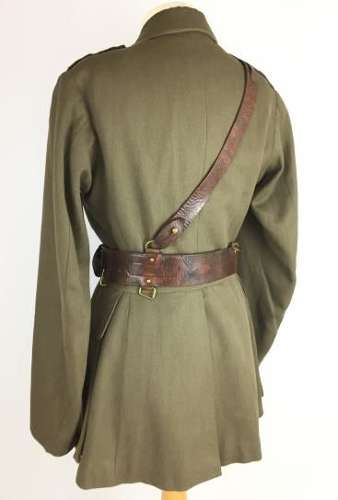 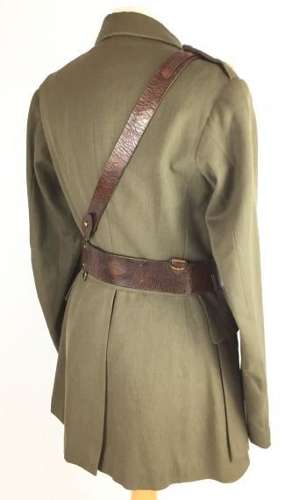 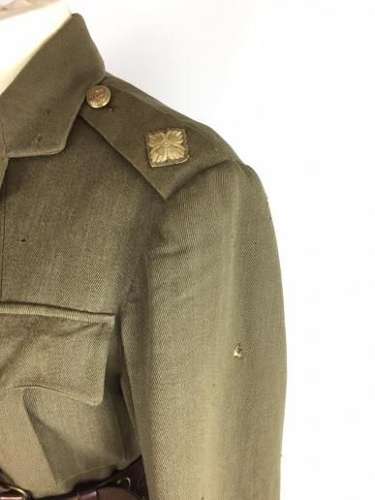 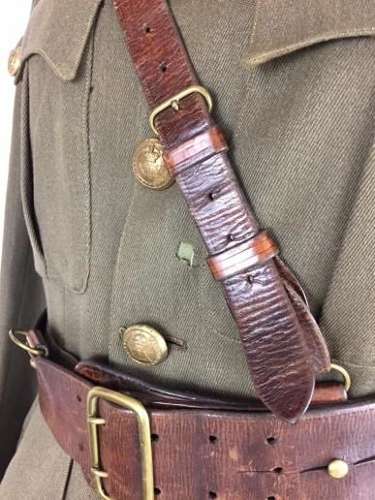 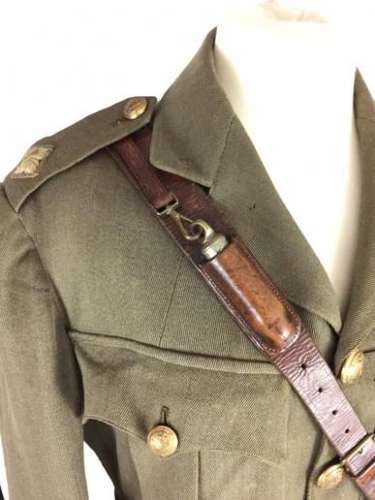 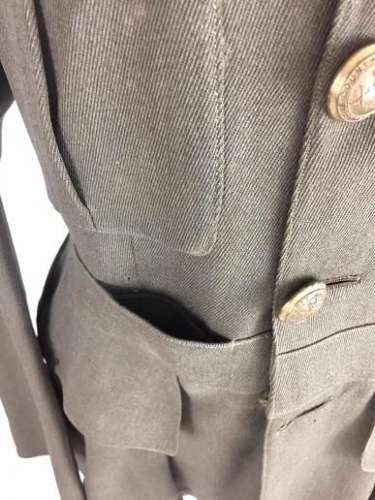 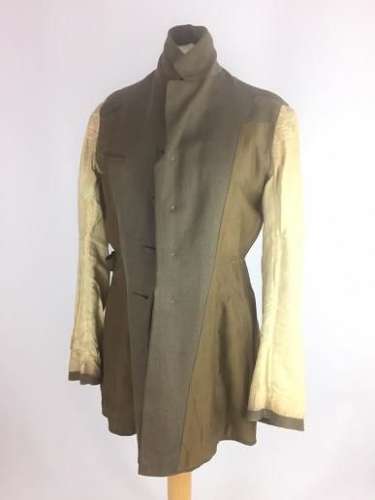 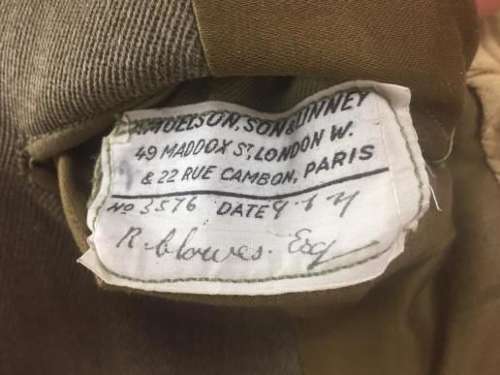 The pattern of this original tunic is sometime referred to as ‘Wind Up’ or ‘Shoulder rank’. It is possible that it started life as a cuff rank as they were often converted to this style, although I can see no real evidence of this one the cuff. The cuff is plain however and does not feature a cavalry cuff or similar. It is very plain and typical of the period. The tunic features cloth pips to the epaulettes which again is typical of a tunic worn by an officer serving in the field.

The jacket has many other features associated with Great War tailored officers items. The jacket features a full waist belt which is only visible when the Sam Brown is not worn and is something that was not really seen after the First World War. This has a small ticket pocket on the right hip which is again a common feature in this period. A long skirt is another attribute this jacket shares with most other period examples and the short length of the epaulettes is just such another period feature.

Inside the tunic is the original tailors label which is situated in an inside pocket. It states the maker as ‘Amuelson, Son & Linney’ of London and Paris. The 1917 date can be seen as can the original owners name ‘R. Blowes Esq’.

The tunic is in reasonable condition for its age and displays well. There are a number of areas of damage to the exterior of the tunic which I have attempted to photograph. This has been reflected in the price and is only really noticeable on close inspection.

The tunic came to me with a nice original Sam Browne belt which is included in the sale. This original belt features a whistle attachment which is a very Great War addition to find on a Sam Browne. Made up of a holder, whistle and leather lanyard with a brass hook. These were added to the cross strap as a convenient and easy place for the Officer to reach, especially when wearing a variety of other pieces of equipment in the trenches.

The belt also features the extra brass Dee rings to the top of side which an extra strap can be attached to thus creating the ‘double brace’ Sam Browne belt which was popular before, and throughout, the First World War.

There is no date that I can find on the belt but the brasses for the double brace and the whistle holder would suggest Great War manufacture. I certainly wouldn’t date the belt as any later and there is a good chance that the belt is original to the tunic as both clearly date from the same period.

Overall a fantastic Great War Officers uniforming grouping. Low subaltern ranks such as this are rare to find and it looks great when displayed with the belt. This would undoubtedly make a fantastic addition to any First World War collection or display!