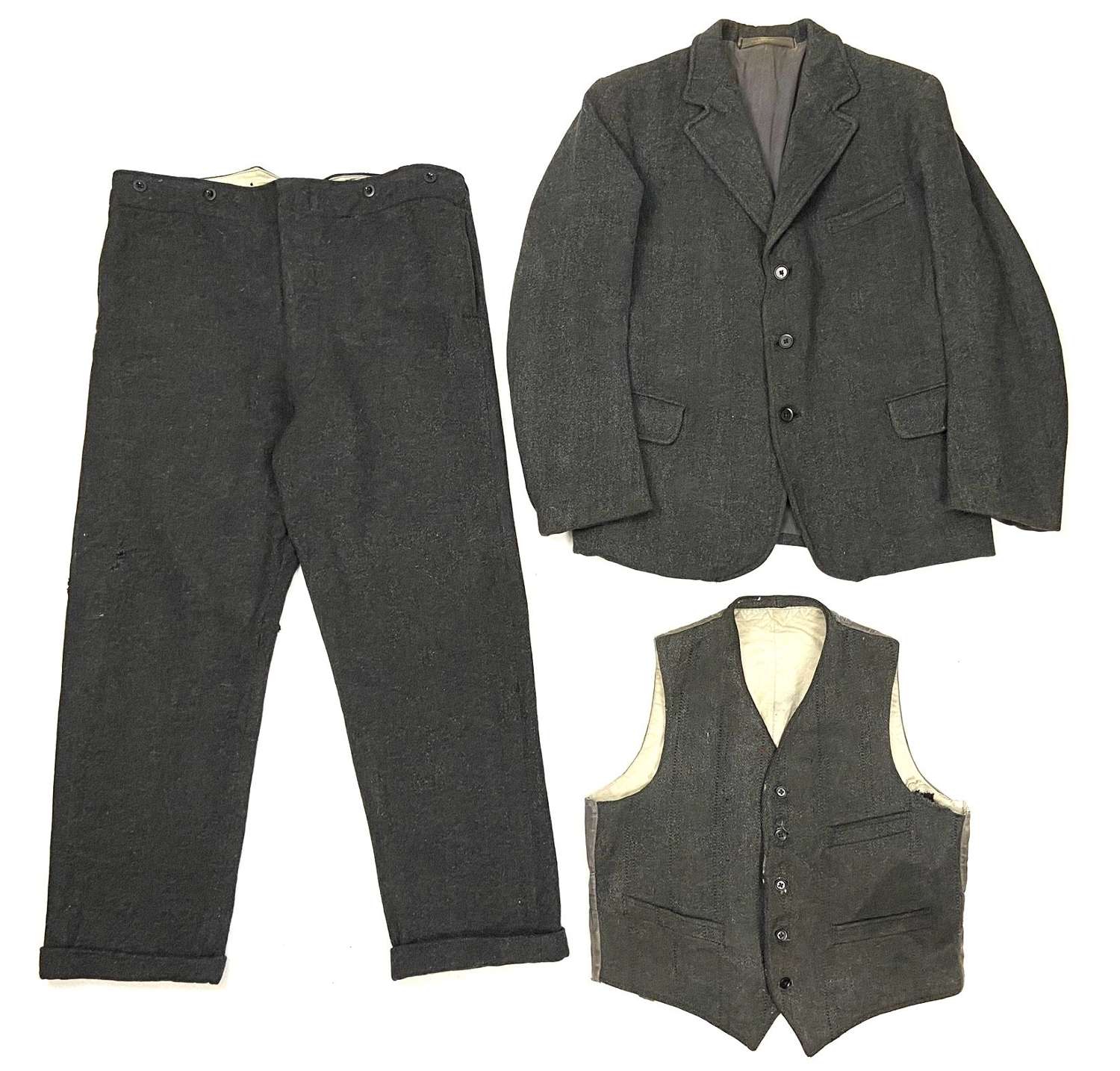 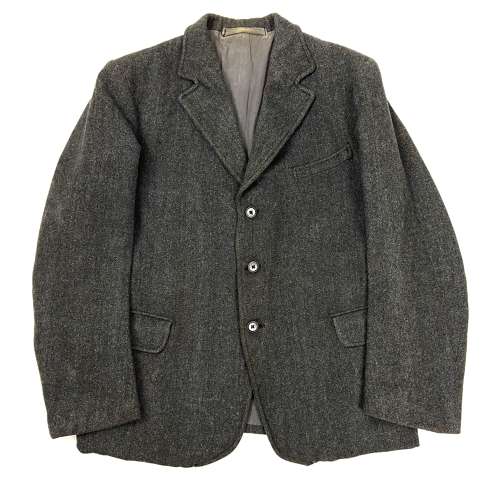 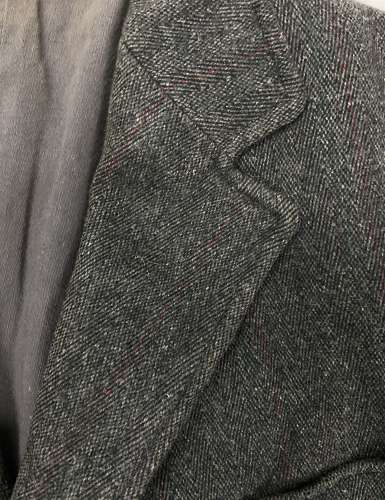 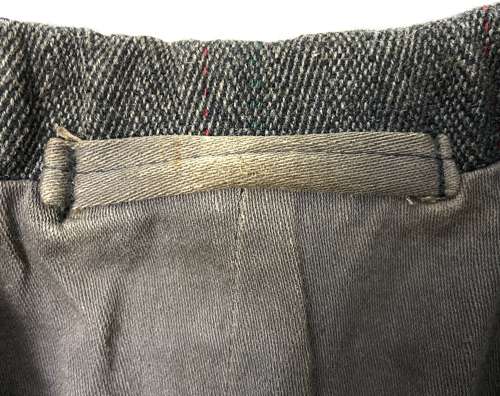 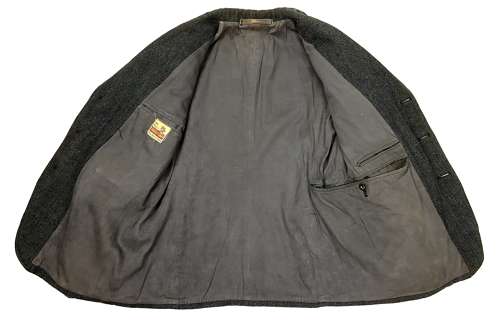 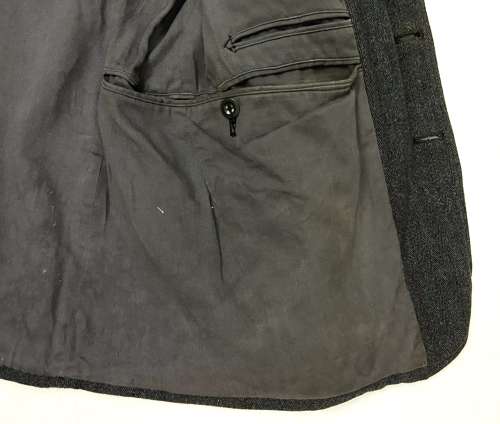 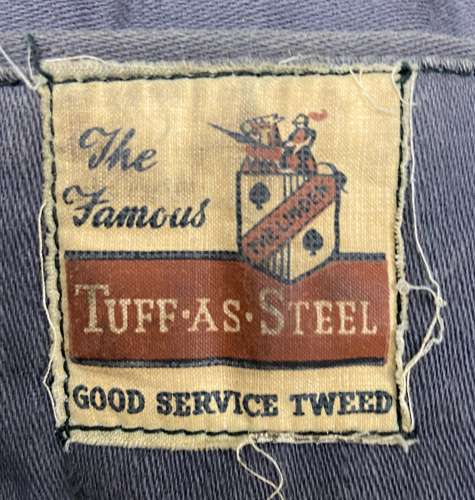 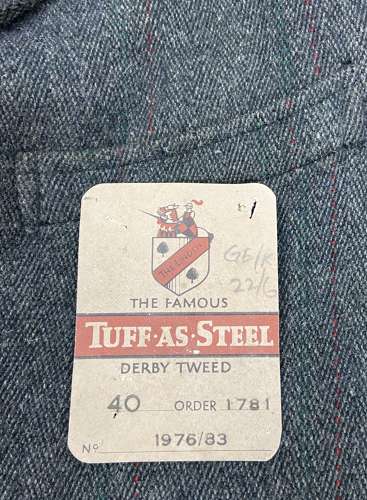 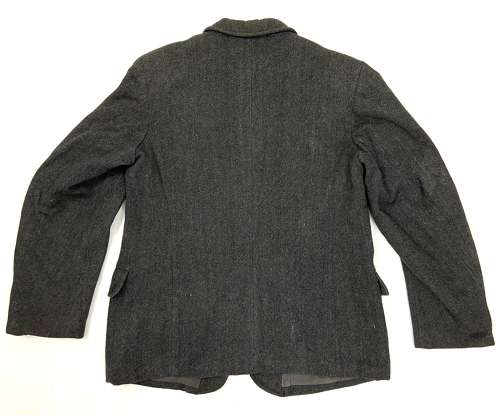 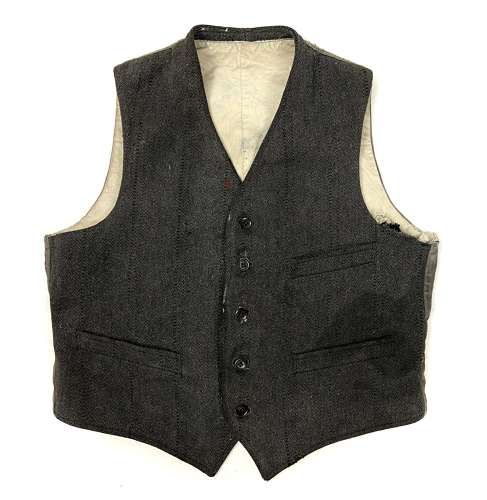 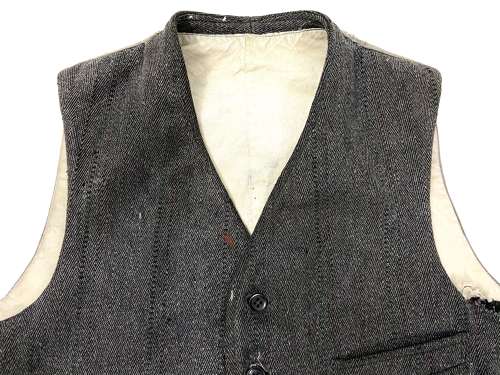 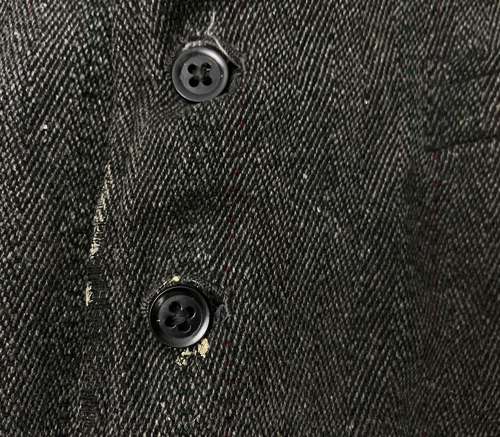 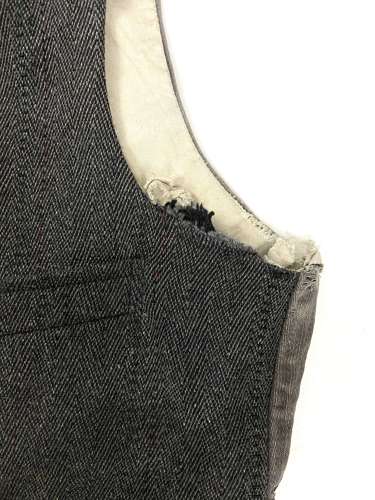 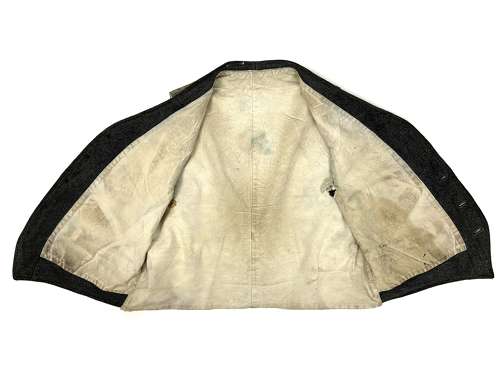 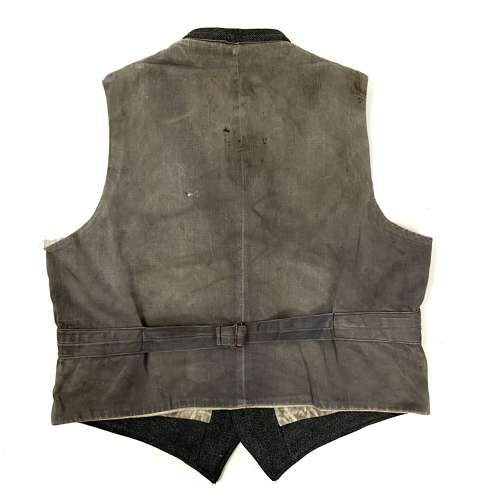 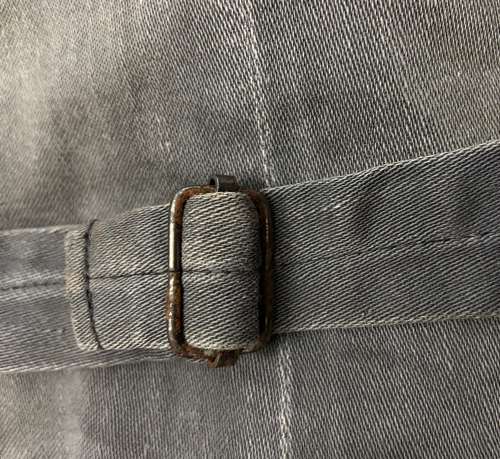 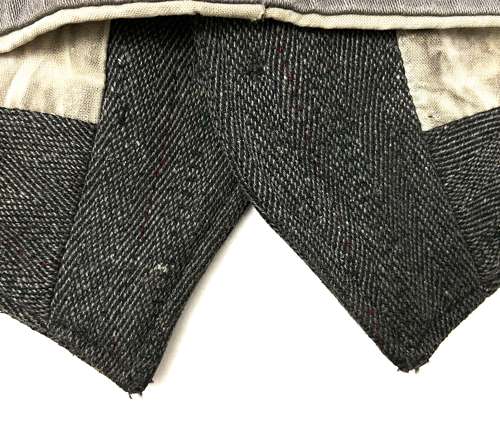 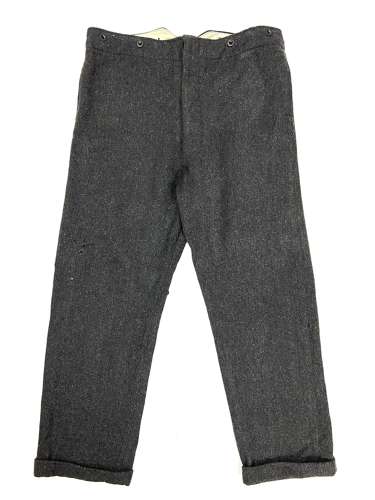 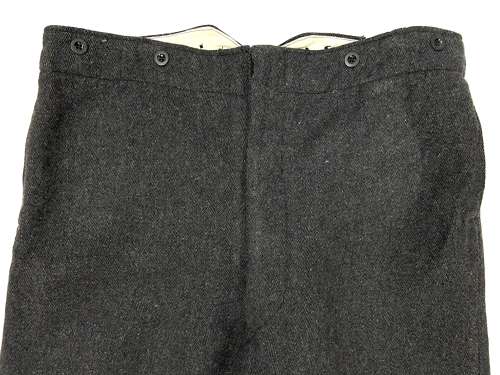 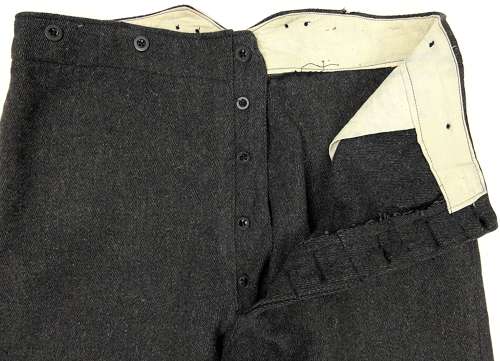 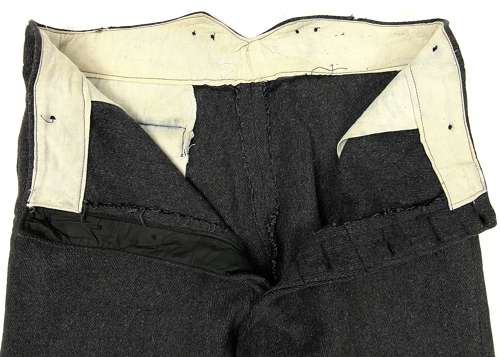 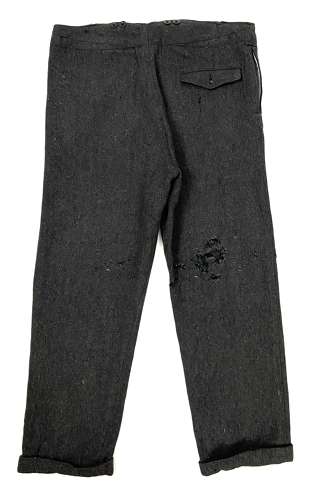 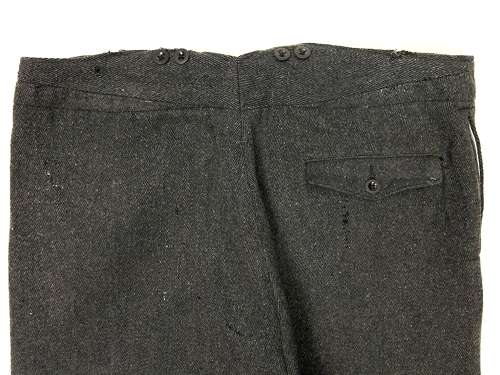 A rare original British Workwear suit made by 'Tuff as Steel' in a blue/grey derby tweed in the 1950s.

British work suits such as this are very rare to find today, particularly as a complete three piece. Whilst some jackets have survived and occasionally other parts, most of the suits were worn to destruction. Furthermore, heavy work suits such as this weren't as common as bib and brace overalls, full overall combination suits or engineers jackets - possibly due to their cost. This suit would not have been overly cheap in its day but was made to last with the original wearer clearly getting his money's worth!

The suit is made from a heavy, durable Derby tweed in a dark blue/grey colour palate. Derby Tweed was popular with working men in the mid-century period due to its hard-wearing nature and warmth. It also still gives off the impression of a smart suit being nicely cut and the heavy weight of the fabric gives it a nice 'hang'.

The suit jacket is cut in an austere fashion befitting of a work piece. It features no lapel button hole and a plain, straight cuff with no buttons or opening. A three button front, flapped lower pockets and a pronounced lapel, typical in shape of the mid-century period, compliment the front. The rear does not feature a vent which is again in-keeping with earlier tailoring and the interior is fully lined with a blue/grey cotton twill. One of the nicest feartures of the jacket is the large lower interior pocket, often referred to as a 'flat cap pocket', due to it being large enough to house such an item of headwear.

The original label is still present to the interior and reads 'The Famous TUFF AS STEEL Good Service Tweed'. There is also a graphic depicting a shield surmounted by a mounted knight with the words 'The Linden' written across it at an angle. A second paper label which would have originally be fitted to breast pocket when new was found inside the pocket. It features some of the same graphics as the interior label but also states the material as Derby Tweed and the size as 40. The fact that the original shop label has been kept with the suit is adds a nice touch to this rare suit.

The waistcoat was clearly the most worn piece of the suit. No doubt the jacket was often hung up out of the way but the waistcoat was rarely removed, as was proper practice at the time. The derby tweed of the exterior has worn right down giving it a different look to the other pieces, almost like that of an abstract herringbone wool. The interior is lined in white cotton whilst the rear is backed with a navy blue / grey 'bluette' type cotton twill. a cinch belt is fitted and made from the same material and fastens with a very plain style buckle which has some signs of corrosion. There is some staining, wear under the arms and some marks which appear to be paint to the front which are all detailed in the pictures. The waistcoat is cut with a five button front and features three front pockets making it different to most British waistcoats which usually have four. The lack of the fourth pocket is just another example of this being a utilitarian work suit.

The final part of the suit is the trousers which are again typical of those made in Britain in the mid-century period. They feature a high-rise waist, wide leg with turn up a the cuff and a single rear pocket. The cut mirrors that of military and workwear trousers made in the inter-war period, in-particular the construction of the rear section around the waist. Brace buttons are fitted around the top of the waist and the fly fastens wit buttons as was standard in the UK during this period.

A scarce survivor of mid-century British working class clothing with some fantastic details. This is a must have for the serious British clothing collector or archive!