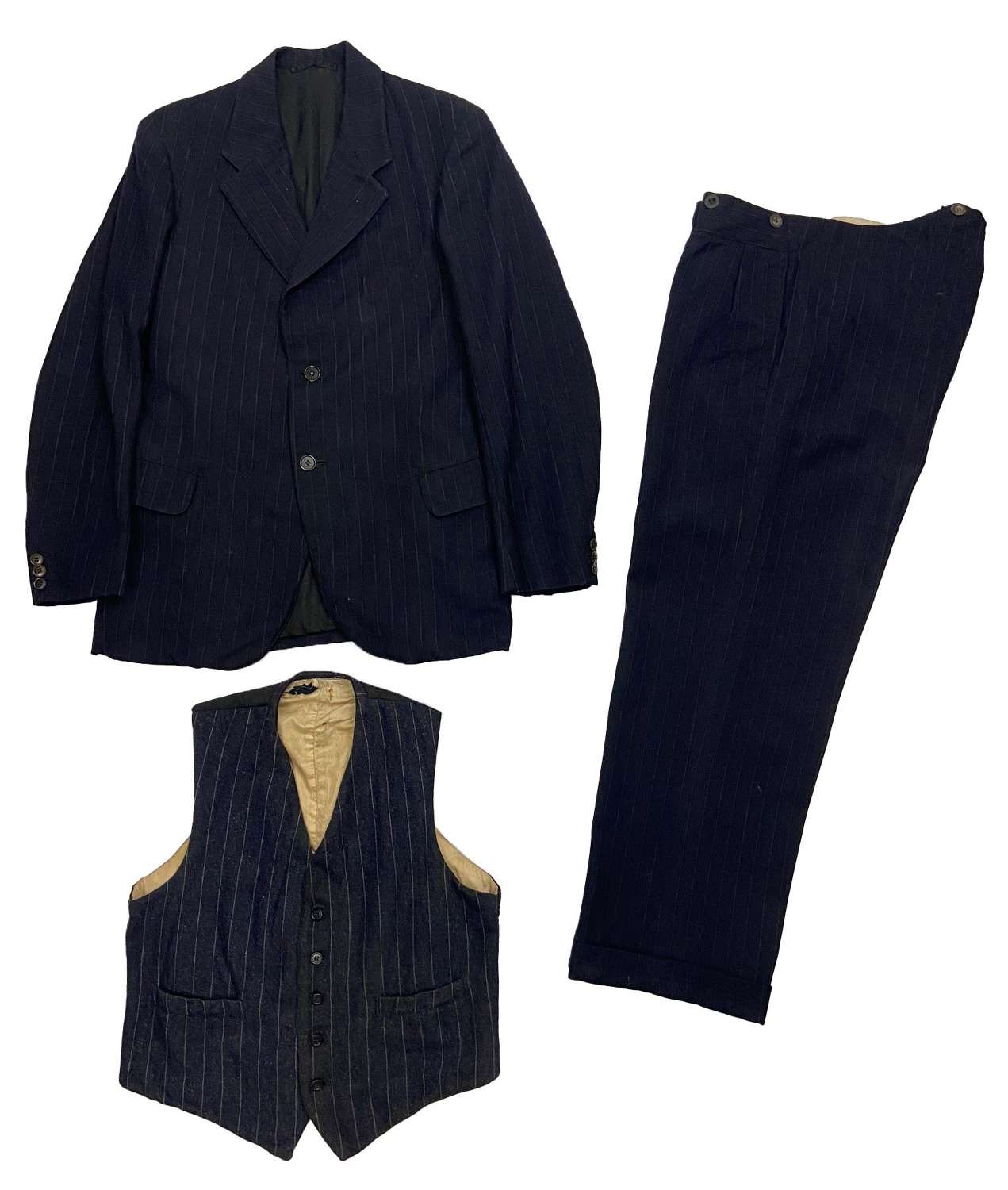 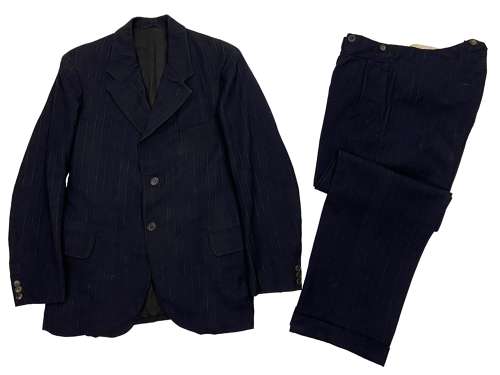 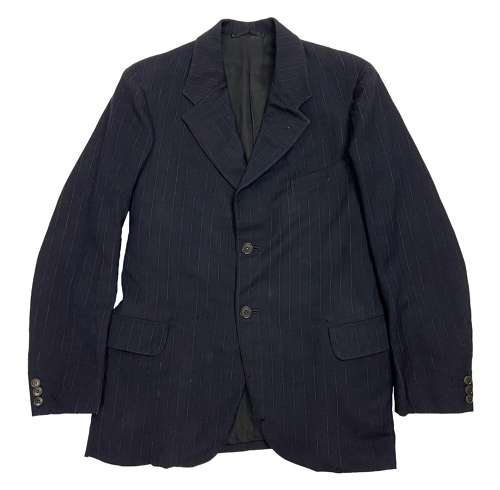 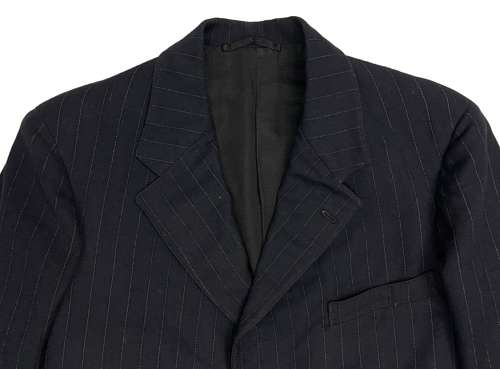 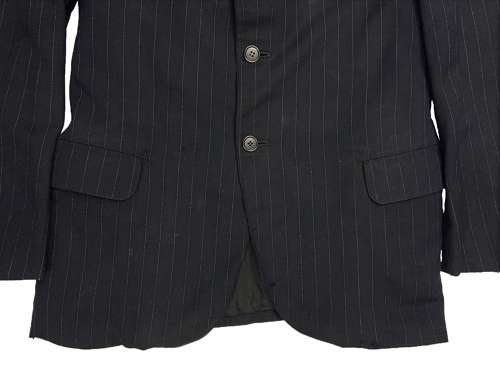 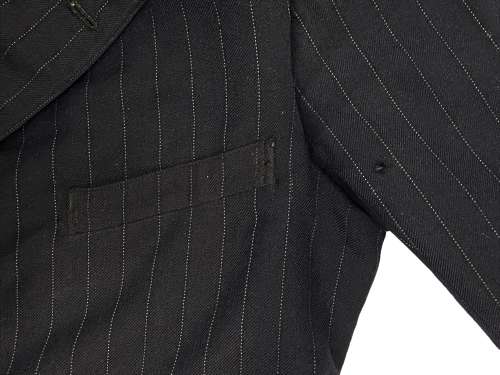 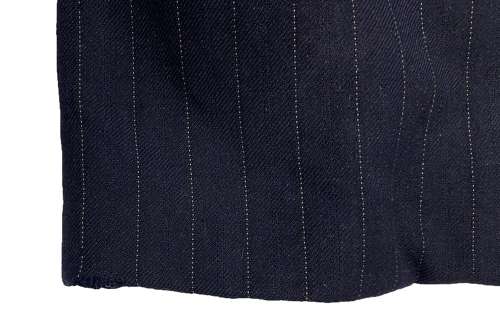 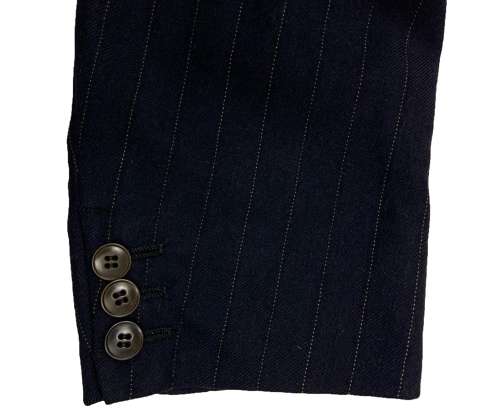 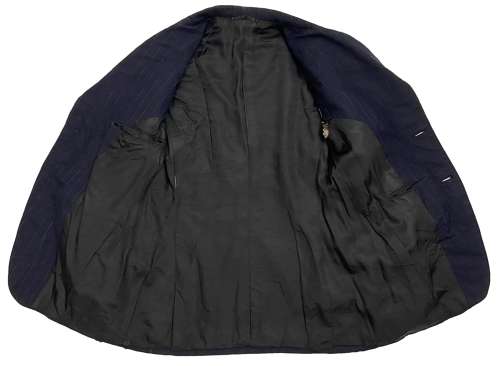 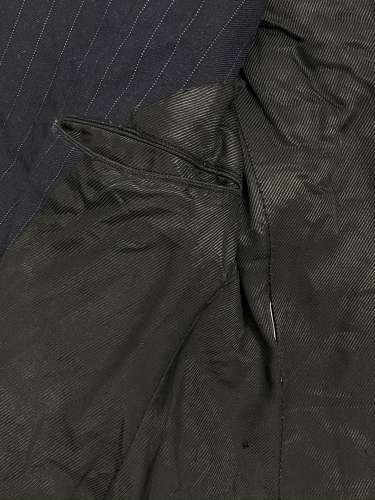 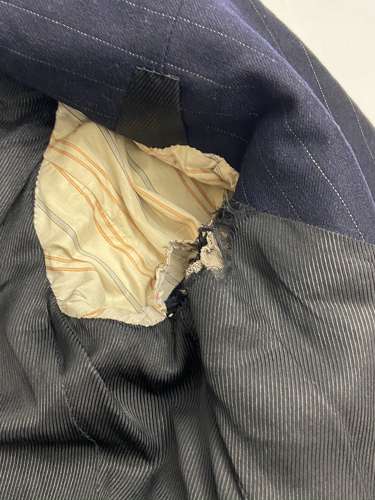 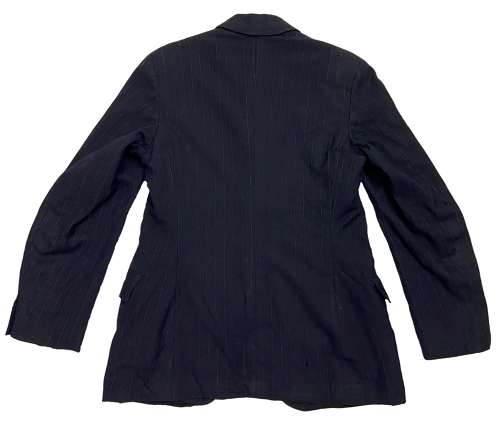 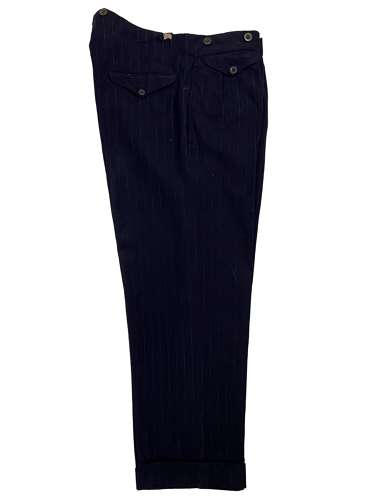 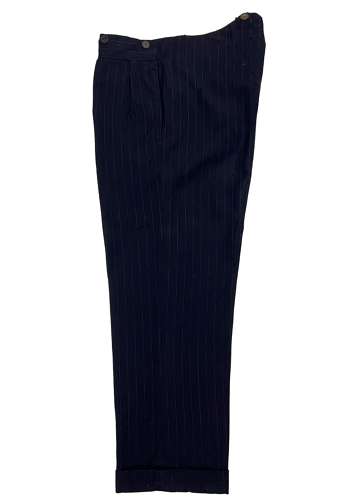 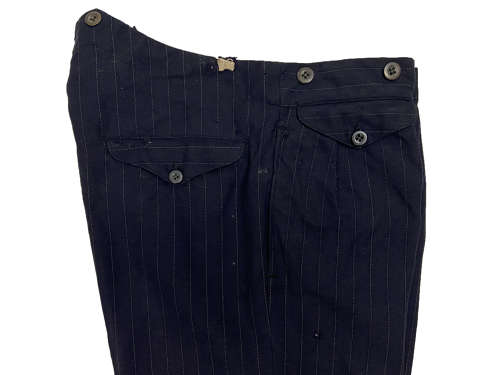 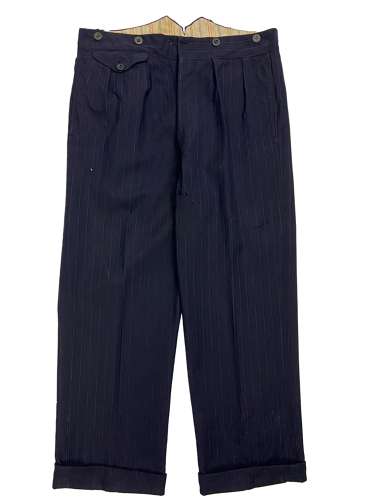 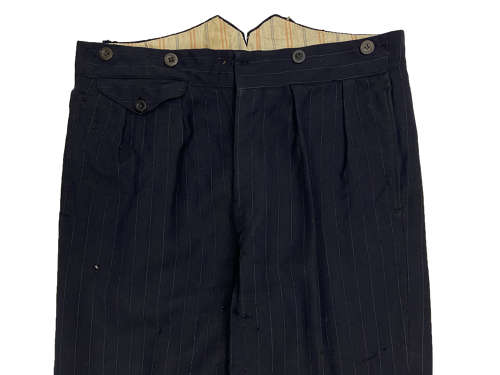 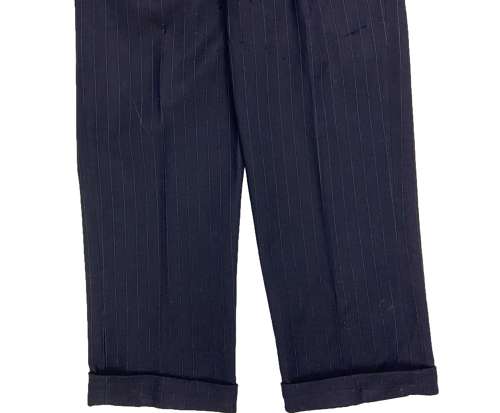 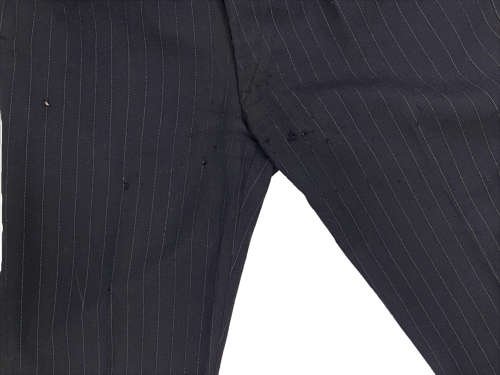 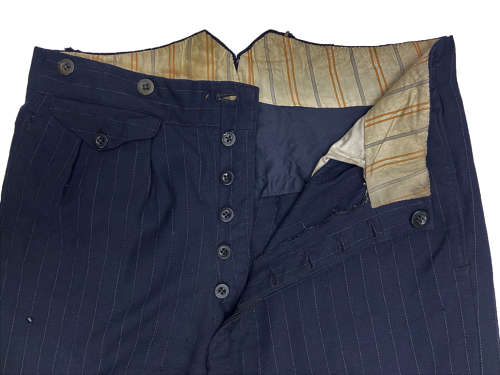 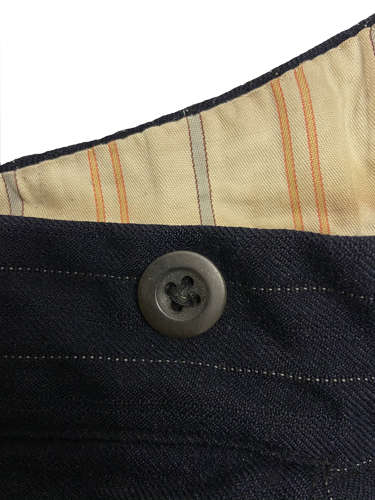 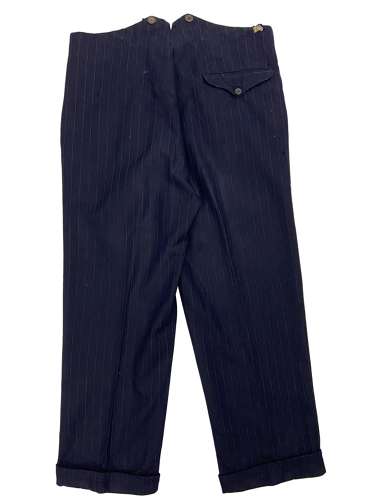 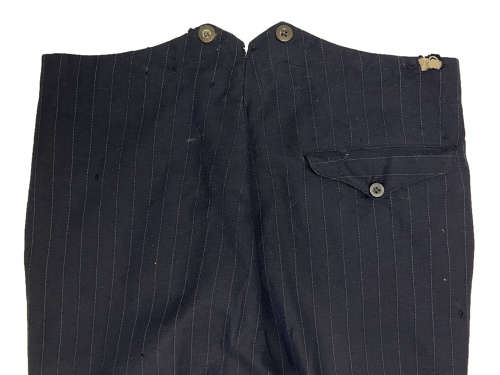 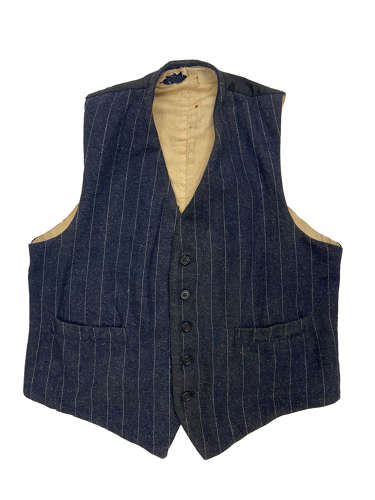 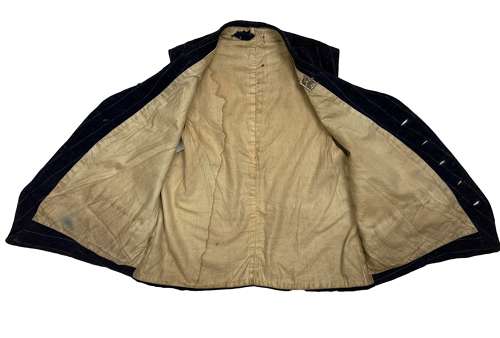 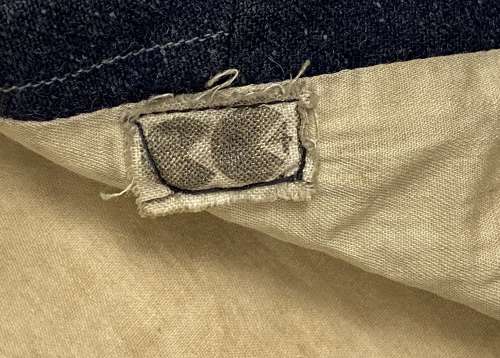 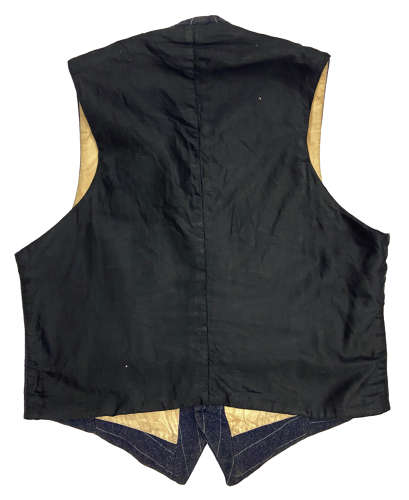 Whilst the majority of CC41 items found today date from the latter part of the 1940s, this suit is a true utility suit dating from the Second World War. The key features are the lack of waist darts to the jacket and the lack of a rear cinch belt to the the waistcoat. The waistcoat also only features two front pockets rather than the traditional four. Also of note is the simple CC41 label which is devoid of a cloth code and indicative of wartime items. The two button front of the jacket is also typical of wartime utility suits. Sadly the waistcoat has been laundered separately to the suit and is now a different shade of blue meaning it is really only wearable as a two piece. It has been kept with the suit however as it is still historically significant.

The jacket as previously stated is a two button example which is quite common to find on true wartime utility suits. It feautres a slanted breast pocket and flapped lower pockets and is cut short in the body - a style often referred to as 'bum freezer'. The interior is fully lined with a black rayon material and there is clear evidence of where the CC41 utility label was previously fitted to the seam of the lining.

The trousers are cut in a keeping with the period and feature a wide leg and high rise waist. A cuff is fitted to the bottom of the leg as was de reigueur during the 1930s and 1940s. Whilst Austerity measures stated the turn ups were not to be featured on suits they more often than not did with surviving examples without being very thin on the ground. One theory often banded around is that suits were made longer in the leg and turn-up after they were bought, therefore adhering to the austerity measure in some way. The trousers also feature a fishtail back which is a nice period feature and a button fly as is usual to find on British suits of this era. More buttons are fitted around the waist and are designed to support braces. A ticket pocket is fitted to the waist which again doesn't quite fit in with the austerity rules but is not surprising either.

The waistcoat is a true utility piece with only two front pockets, rather than the usual four, and not cinch back belt and buckle to the rear. It appears to have been worn and washed more than the rest of the suit giving it a mis-matched appearance. It does however retain its original CC41 label which is the early style without a fabric code and is another indicator that this is a true wartime suit rather than a later example.

The suit is a very small size and will suit a shorter person of around a 34" chest. When laid flat it measures -

The suit is in worn condition with plenty of signs of wear and age. There is damage to all three pieces which is detailed in the pictures. This is a far from perfect suit but this is reflected in the price. It may be possible to have the suit repaired professionally.

Whilst not in great condition this suit is a true wartime austerity example, the like of which is rarely encountered on the market today. This could make a great addition to and WW2 or 1940s collection.