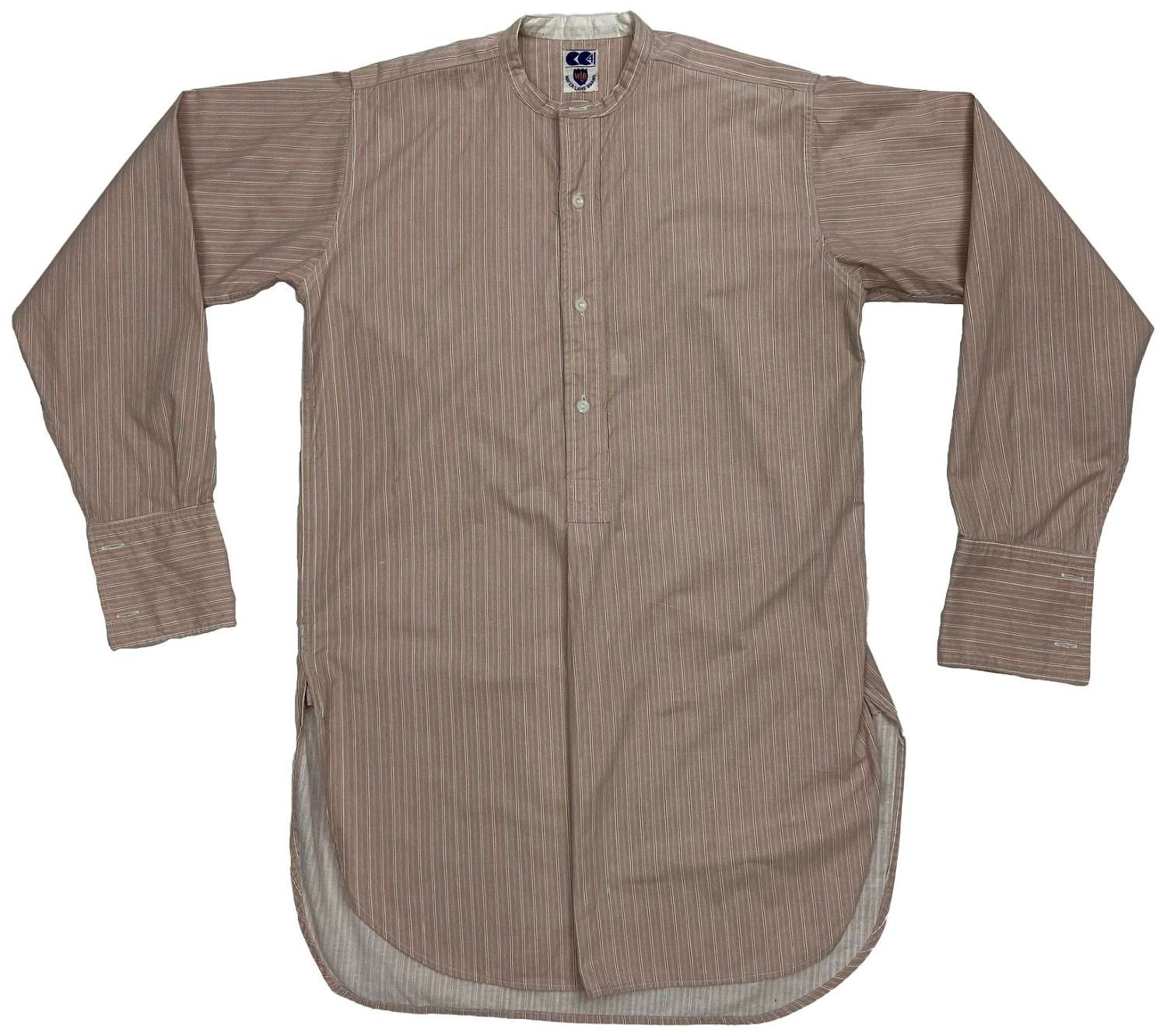 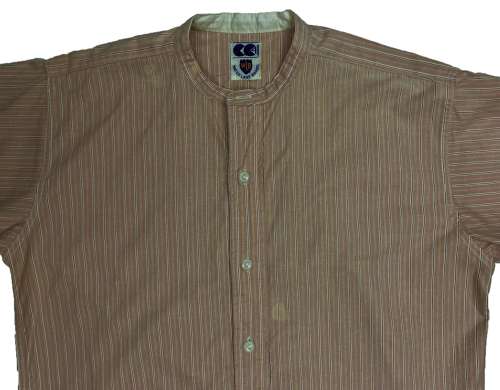 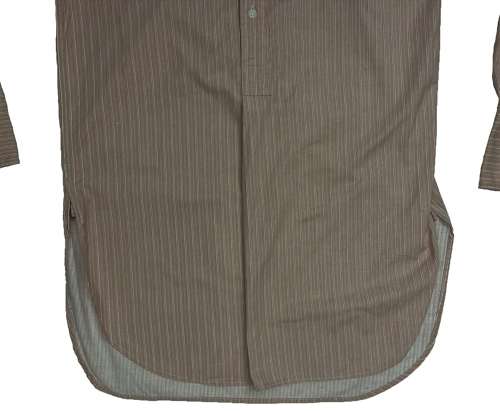 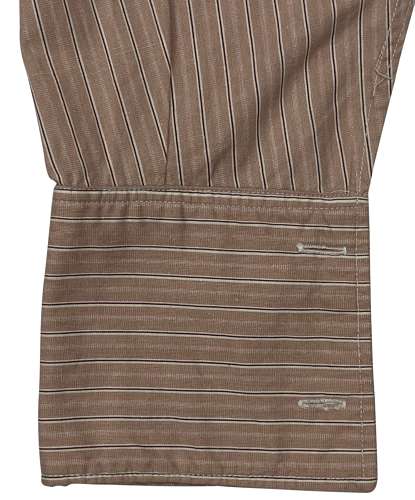 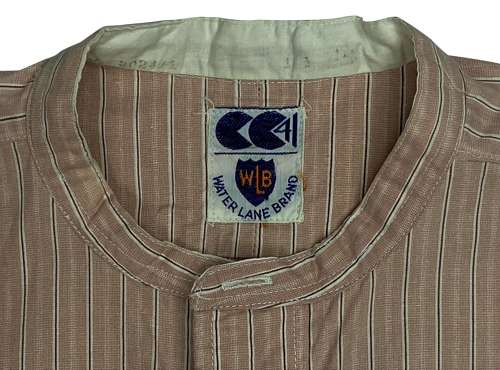 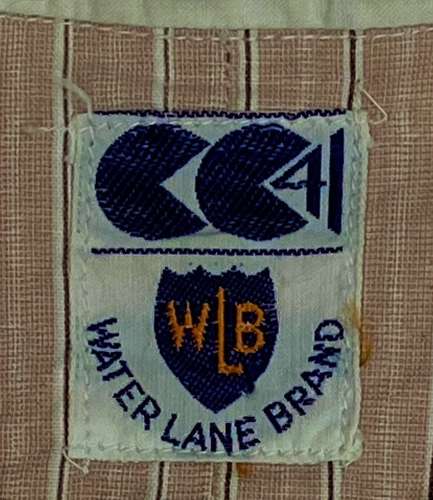 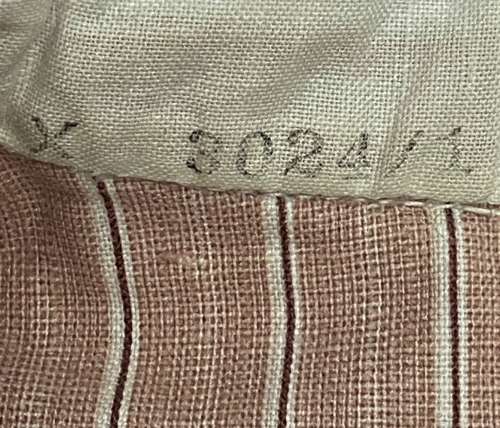 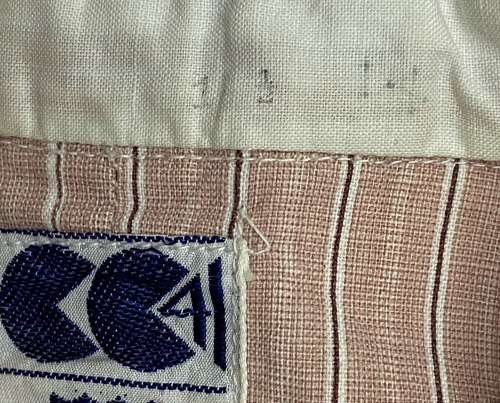 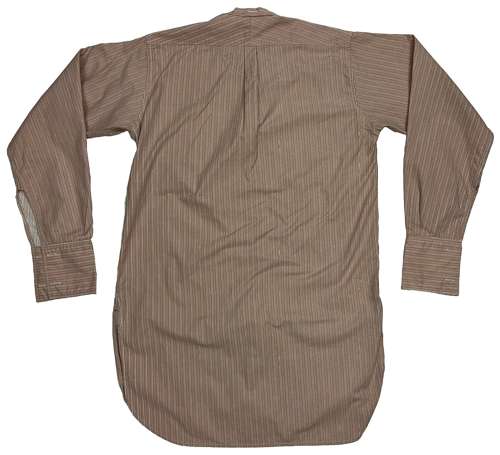 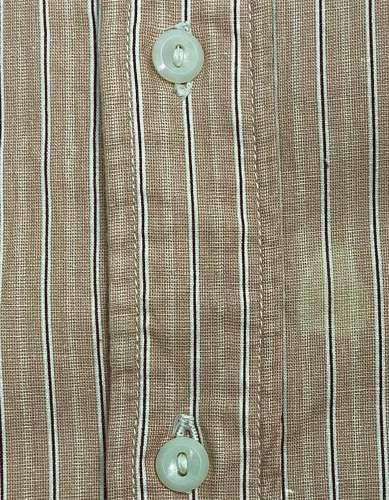 An original 1940s poplin cotton collarless shirt by 'Water Lane Brand' which was made under the CC41 utility clothing scheme.

Water Lane Brand dates back to the Victorian era and were a prolific manufacturer of workwear in the first half of the 20th Century. Sometimes referred to as 'W.M Sudgen' who owned the brand and are still making shirts today, the Water Lane Brand was founded in 1924 and named after the street the first factory stood on in the late Victorian period.

The shirt was made as part of the CC41 utility scheme which was brought into effect in the UK in 1941 as part of the larger rationing scheme. The idea behind it was that affordable, quality clothing would be available to everyone of every class and could be bought using coupons.

This shirt is typical of those made and worn during the 1930s and 1940s. It is made from a redwood coloured lightweight poplin cotton which has a white and brown stripe running through it and is of half placket design which is pulled on over the head. This design was prevalent from the Victorian period through to the 1950s when full button front shirts started to gain popularity. The shirt also features a double cuff, or 'French cuff'. This is designed to be folded back on itself and worn with cufflinks - a popular choice during this period.

The collar is neckband style made from the same material as the body of the shirt. It is designed to be worn with a detachable collar but can also be worn without one. Below this the original label is still present and features both the makers logo and the CC41 utility logo on the same label. The fabric code is stamped to the inside of the neck band and reads X3024/1. The collar size of 14 is also marked to the band.

It is important to remember that these shirts are cut very wide across the chest to allow them to be pulled on over the head so the true fit will be much smaller than the measurement provided. The measurement of the arms includes the french cuff which would be folded back when worn with cufflinks, shortening the measurements by roughly 2"

The shirt is in good condition for its age and displays well. There are some signs of wear and some marks to the body. Please study the pictures before purchasing and bear in mind that this is a pre-worn vintage shirt which has small issues commensurate with age.

A nice original WW2 period shirt which would make a great addition to any wardrobe or collection. It would suit a variety of wartime uniforms including LDV, Home Guard and many more.