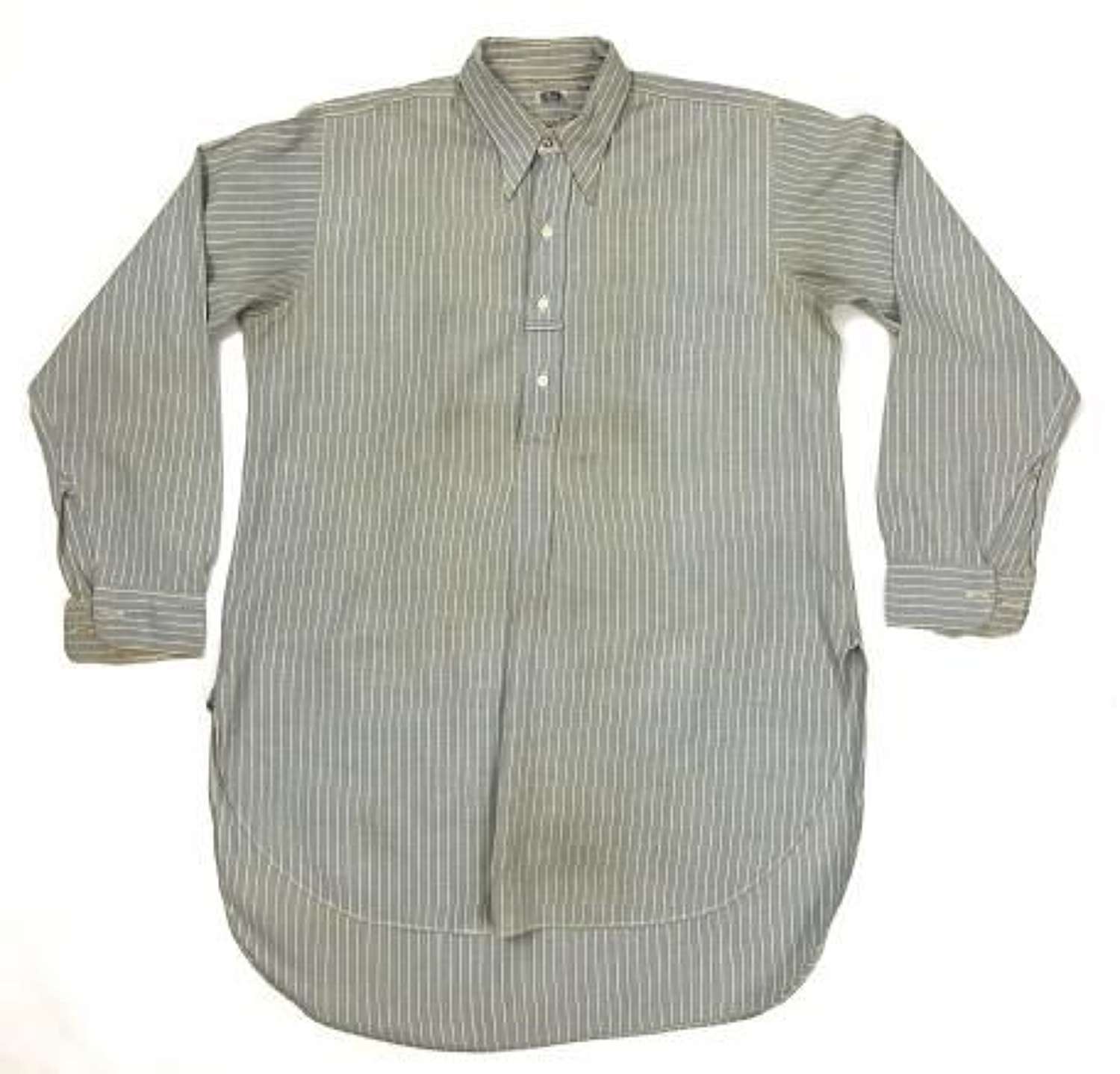 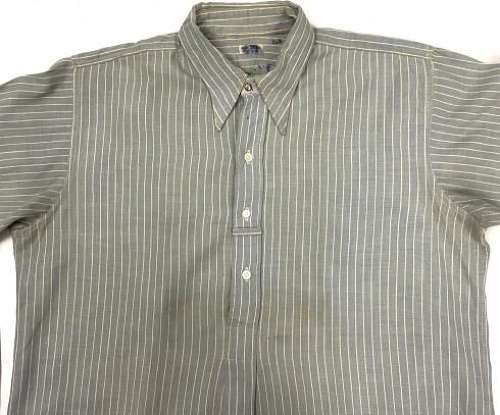 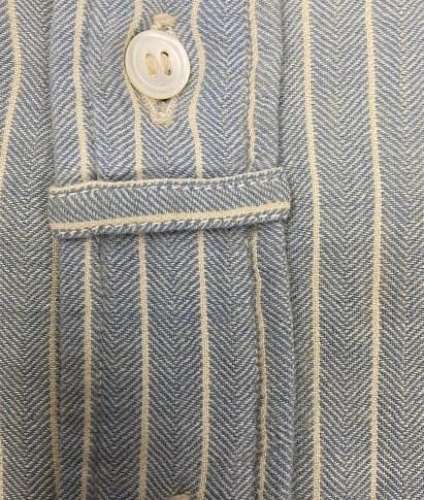 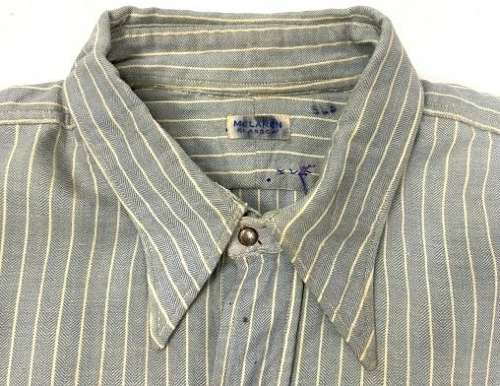 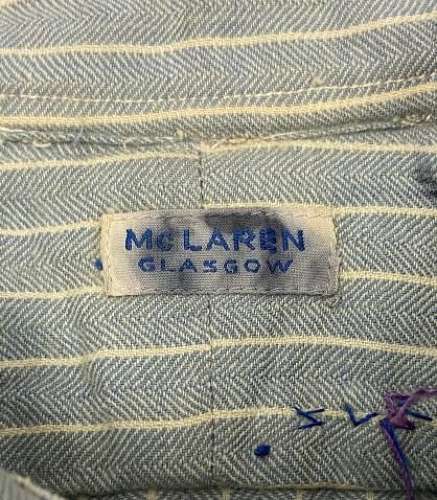 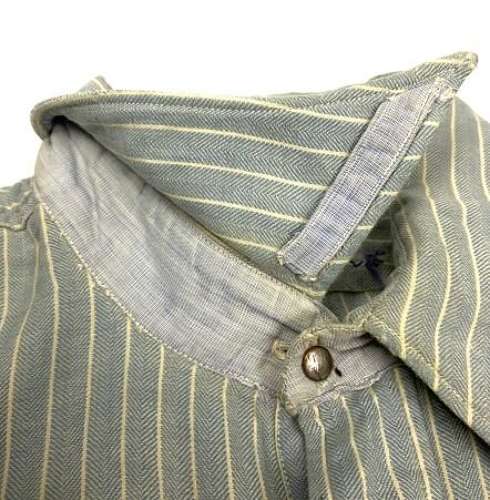 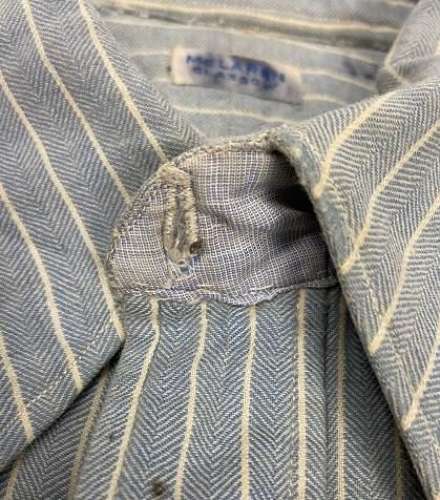 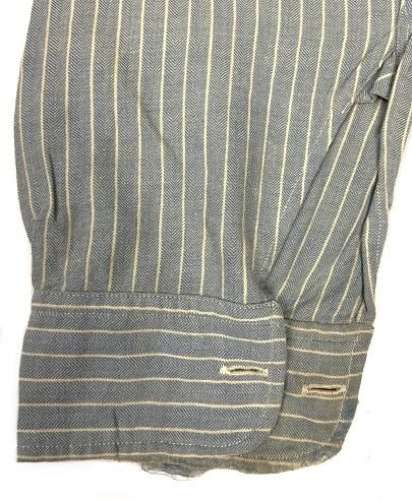 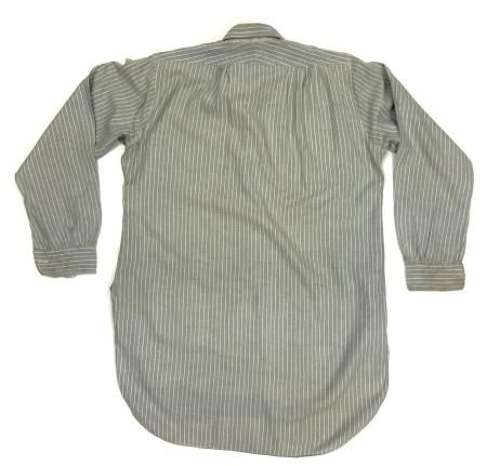 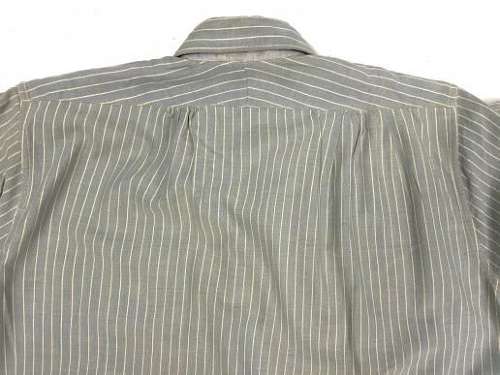 A fantastic original men's shirt flannel shirt made by McLaren of Glasgow in the early 1940s.

This particular shirt is typical of the late 1930s and early 1940s in its construction. It features a half front, or 'tunic' front, which is pulled on over the head. This style of shirt was popular during the first half of the 20th century before slowly being replaced by more fitted full button front shirts from the 1950s onwards. The collar is also indicative of the era featuring a beautiful long spearpoint shape.

The shirt is made from a soft wool flannel cloth which features an amazing blue herringbone with white pinstripe design. Interesting details include the use of vertical button hole to the top of the collar and the loop attached to the placket which I assume is to hold the rear part of the tie to the shirt. The barrel cuffs do not feature a button but instead two button holes which would have been worn with cuff links and give the shirt and interesting blend of formal and informal.

Another brilliant feature of the shirt is the repair to the collar. This was clearly a much loved and much loved shirt by its original owner and the collar obviously wore through. It was common to 'turn' collars during this period to give a shirt more life and this is no exception. What is particularly nice however is how the back of the collar has been faced with RAF officers end on end cotton. Loops have been made from the same material and this makes the shirt a rare survivor of the make-do-and-mend ethos of the war years! The collar also features a collar stud which is original to the shirt and has been with it since the war.

Inside the shirt the original makers label is still present and is clear and legible. It reads 'McLaren Glasgow' who were a well known gentlemen's outfitters during this period.

The shirt is a smaller size which will fit someone of around a 38" chest depending on desired fit. When laid flat it measures -

As previously described, the shirt is in well worn condition. It bears various marks and stains with some fraying to cuffs. Please study the pictures and bear in mind that this is a pre-owned shirt which is over 75 years old!

This is a truly stunning early 1940s men's shirt with lots of fantastic details, genuine period wear and made from an incredible cloth. A beautiful shirt for the serious vintage collector.