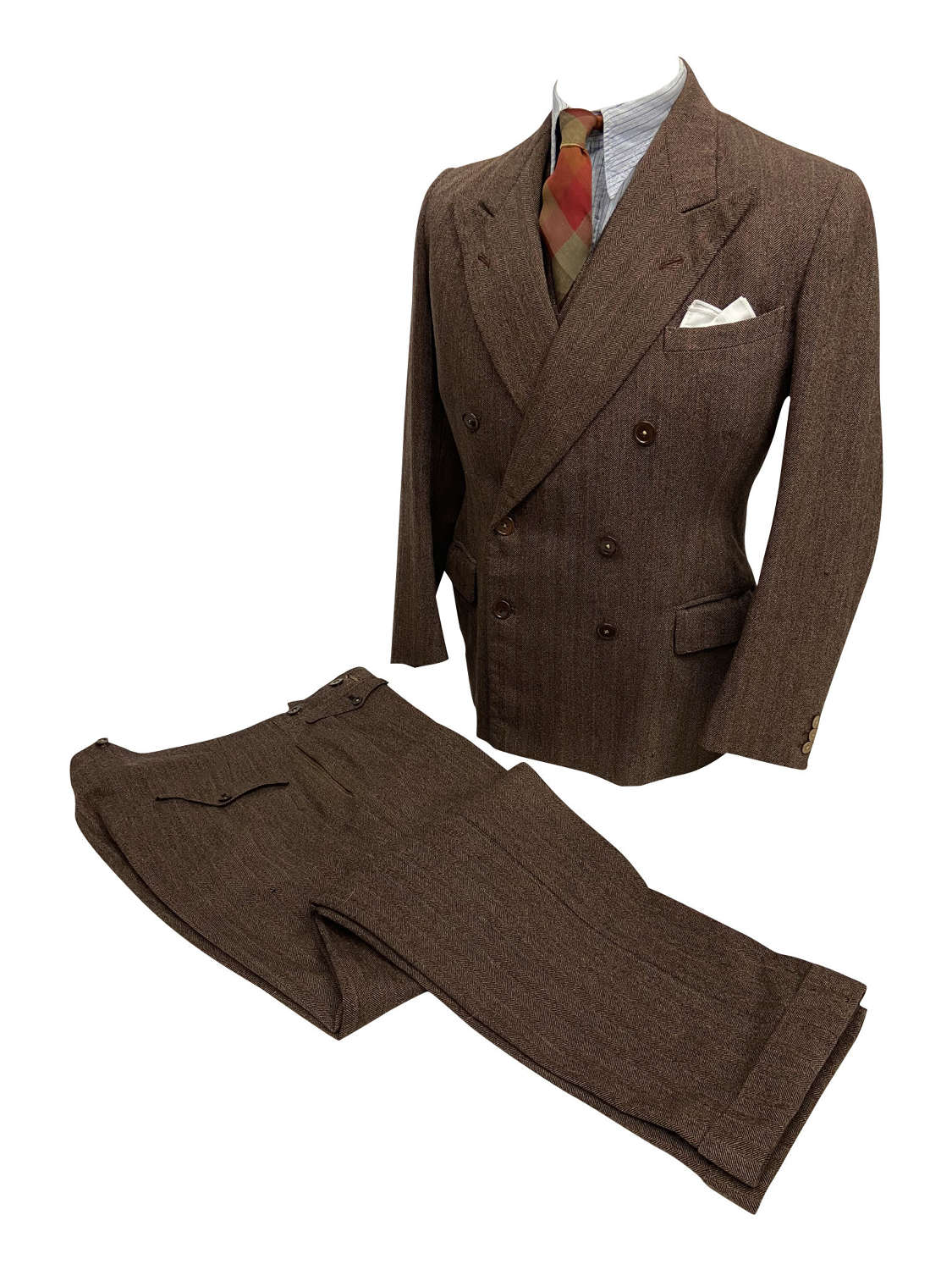 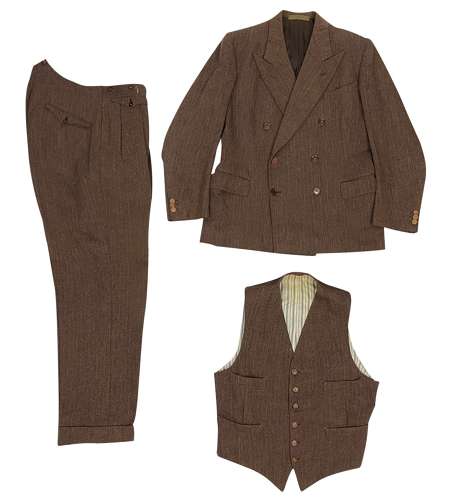 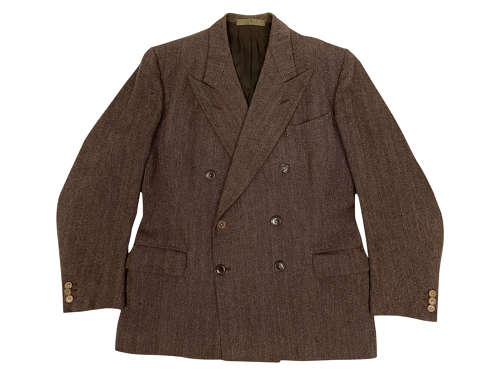 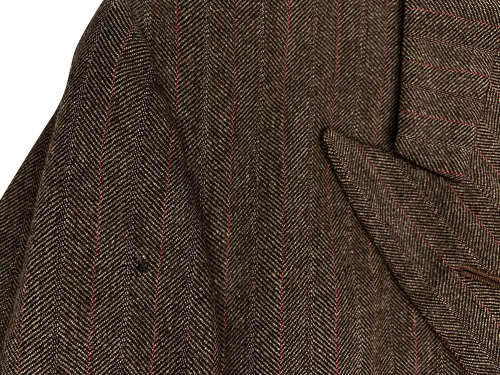 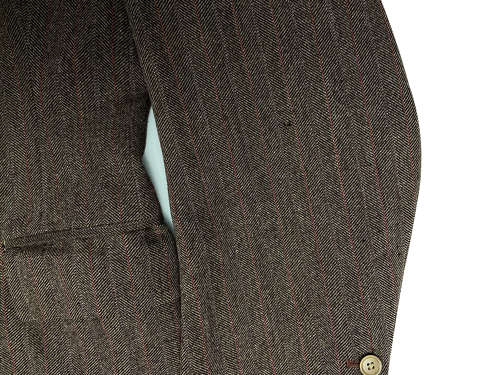 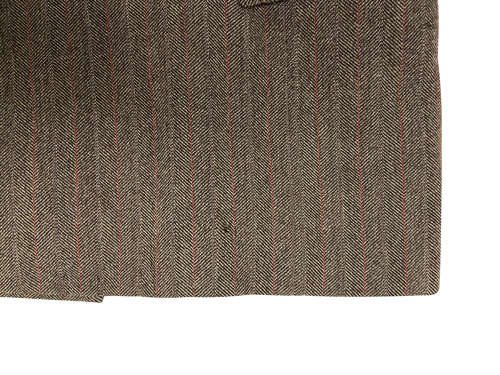 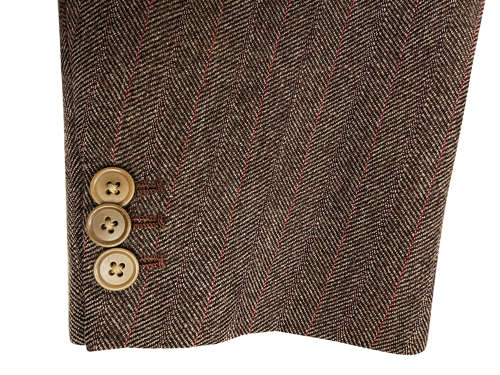 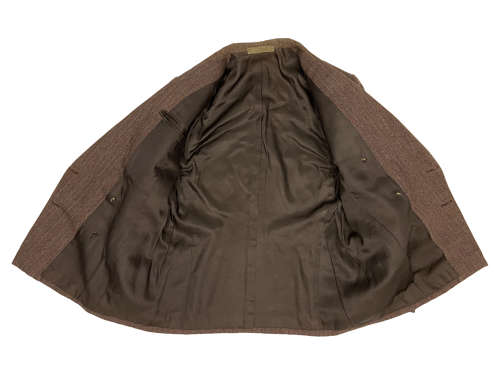 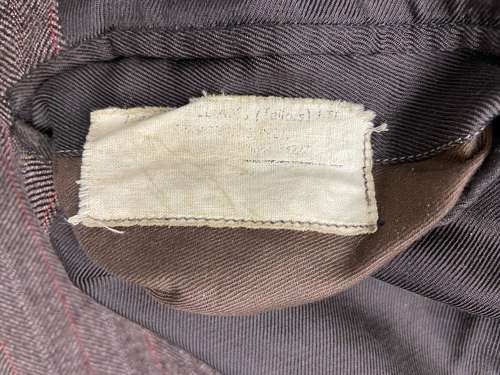 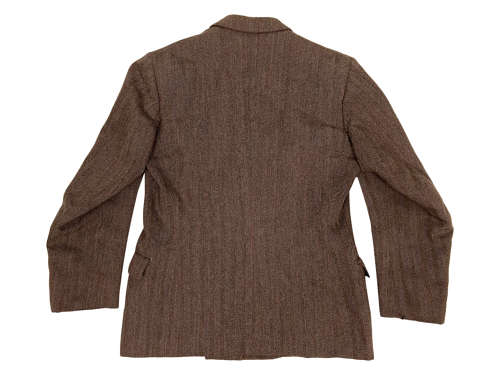 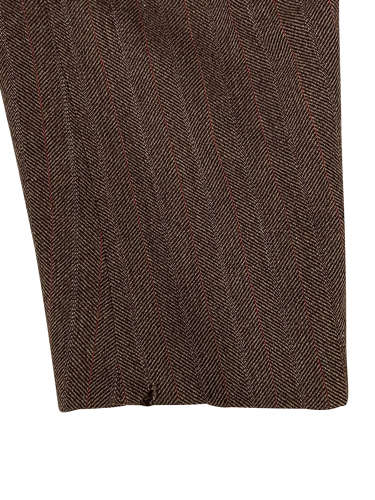 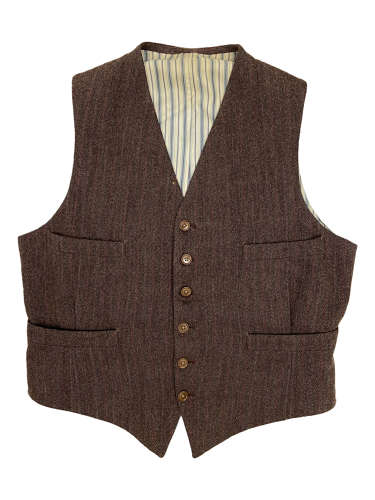 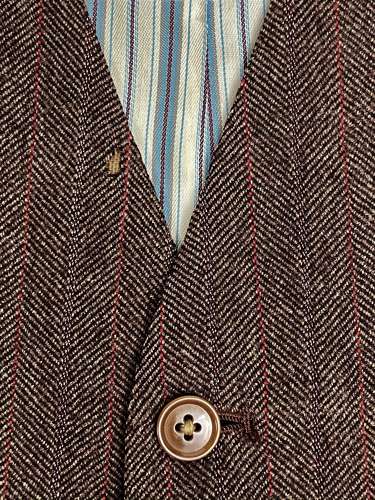 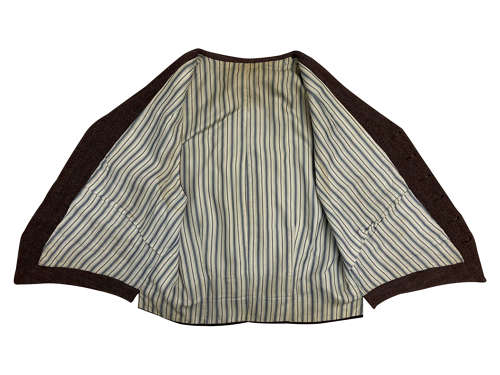 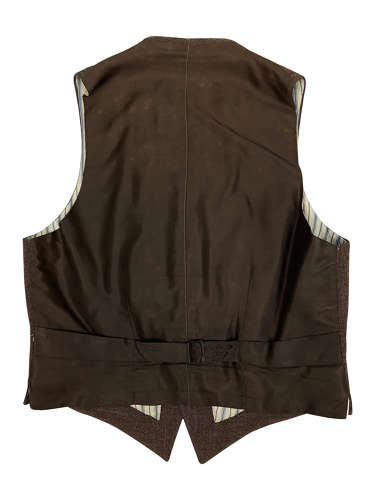 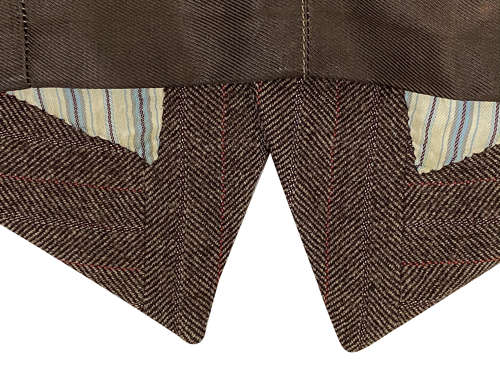 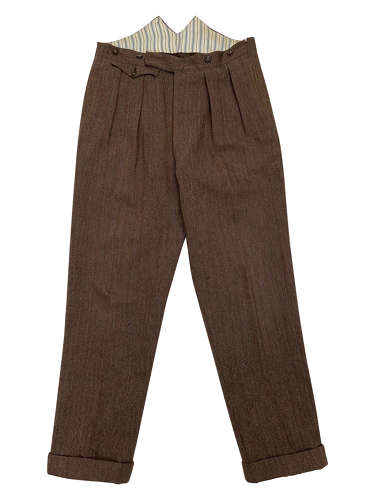 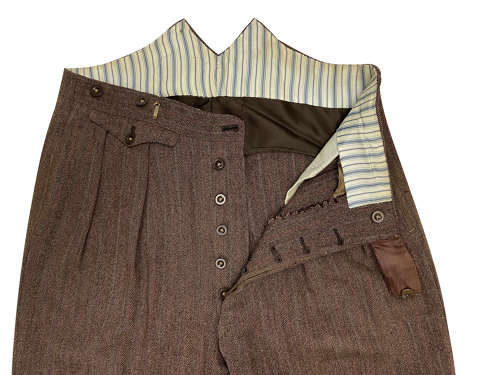 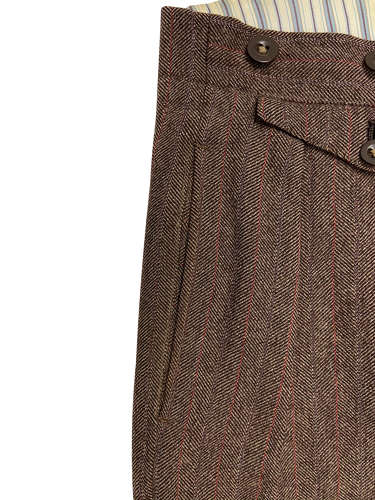 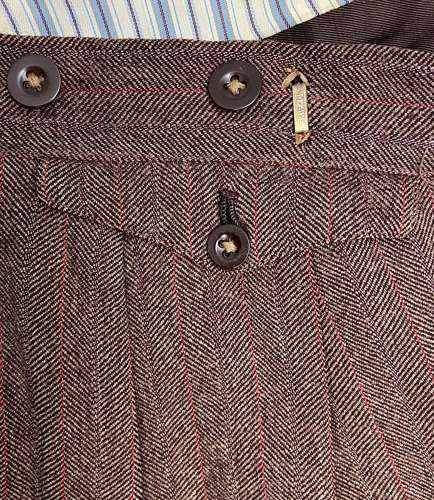 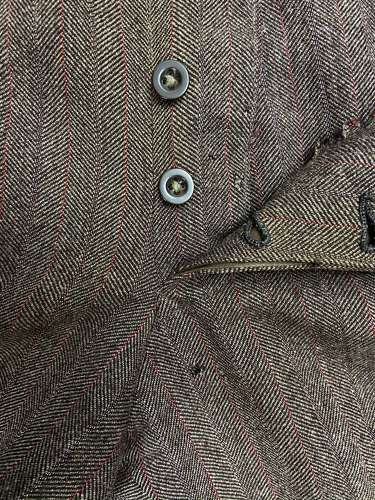 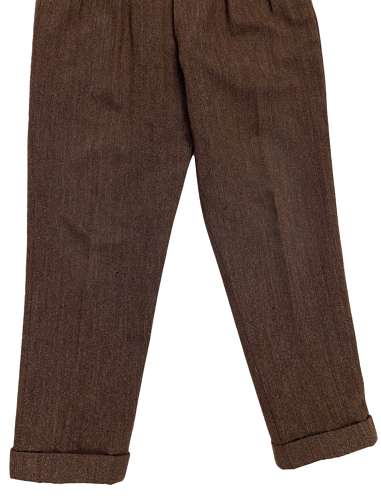 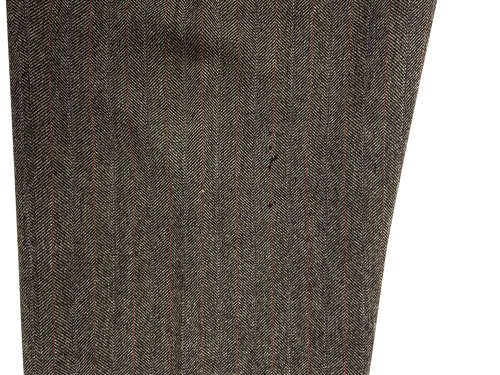 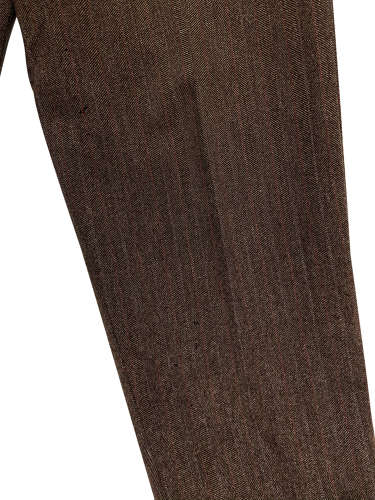 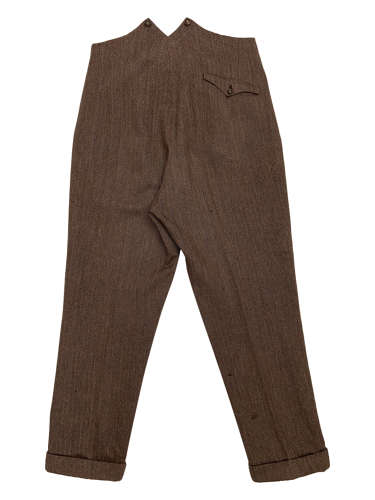 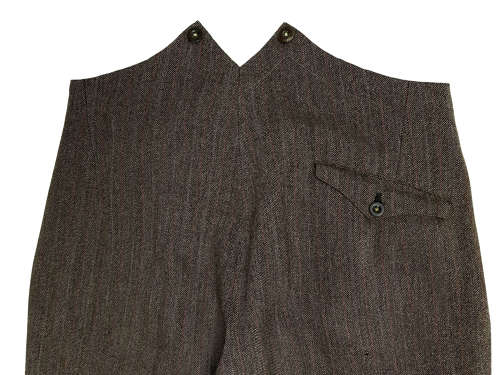 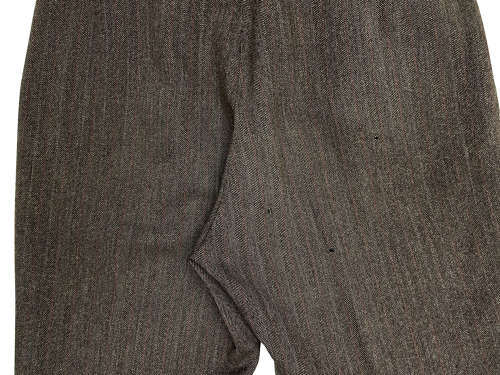 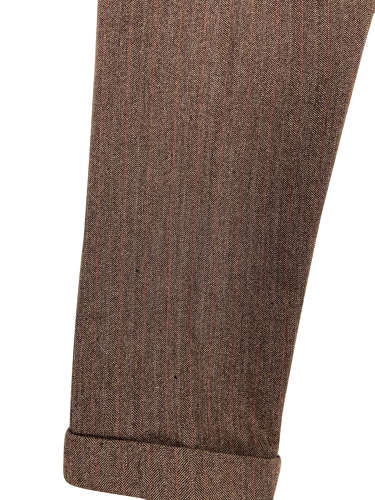 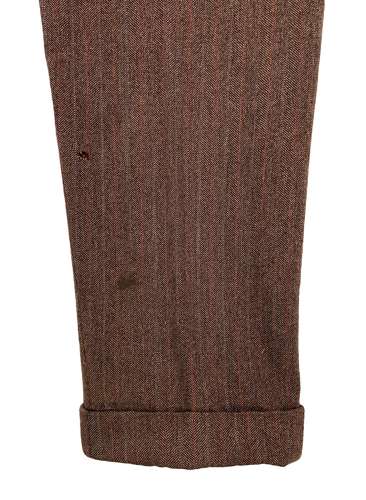 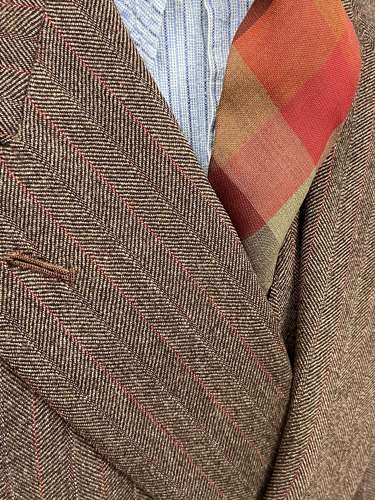 A stunning original men's three piece suit made from a brown herringbone stripe in the 1930s.

The cut of this suit is typical of those made in Great Britain during the 1930s. Made from a fantastic herringbone stripe with brown and oatmeal tones, the suit is made of three parts as was common at the time. The jacket is a double breasted example with a two button fastening and features a typically period peaked lapel shape. The jacket is cut short in the body in a 'bum freezer' style which was popular at the time. There are no vents to the rear which is another typical trait of jackets from this period. A three button cuff can be found to the sleeve and the lapels both boast button holes. The jacket is fully lined and the inside pocket retains its original tailors label which is sadly quite washed out. It states the tailors name as 'Harry Williams (Tailors) Ltd' who I believe were based in Nottingham.

Next is the waistcoat which is made from the same fantastic herringbone material. It features a six button front and four front pockets. The front fastens with the same butterscotch coloured buttons as are used for the cuff off the jacket and the interior is lined with a striped material, as waistcoats from this period typically are. The rear of the waistcoat is made from a brown coloured twill and features a cinch back belt and buckle made in the same material.

Lastly we have the trousers. These are again typical of the period featuring a fantastic fishtail back as was popular during this period. They feature a high rise waist, turn up to the bottom of the leg and a conservative cuff which wasn't uncommon during the earlier part of the decade. There is however 3" of material to be let out of each side seam of the leg so these could become a very wide trouser indeed! The front of the trousers feature twin pleats  and slash pockets are located in the side seams. The fly fastens with buttons and more buttons are fitted around the outside edge of the trousers to support braces. A ticket pocket is also present to the front which is a nice period detail and the rear has a single pocket.

The suit will fit around a 39" chest and a 32" waist depending on desired fit. When laid flat it measures -

The suit is in reasonable condition for its age. It looks good when worn but does have a number of small flaws which are carefully detailed in the picture. There are some moth nips, mainly to the jacket and trousers and some minor staining including some around the opening of the slash pockets on the trousers. Most of these issues are only noticeable on close inspection and could be repaired by a specialist such as an invisible mender. Please take time to study the pictures to satisfy yourself of the condition.

All in all a fantastic looking suit with some small issues which are reflected in the price. This would make a great addition to any wardrobe or collection without a doubt!