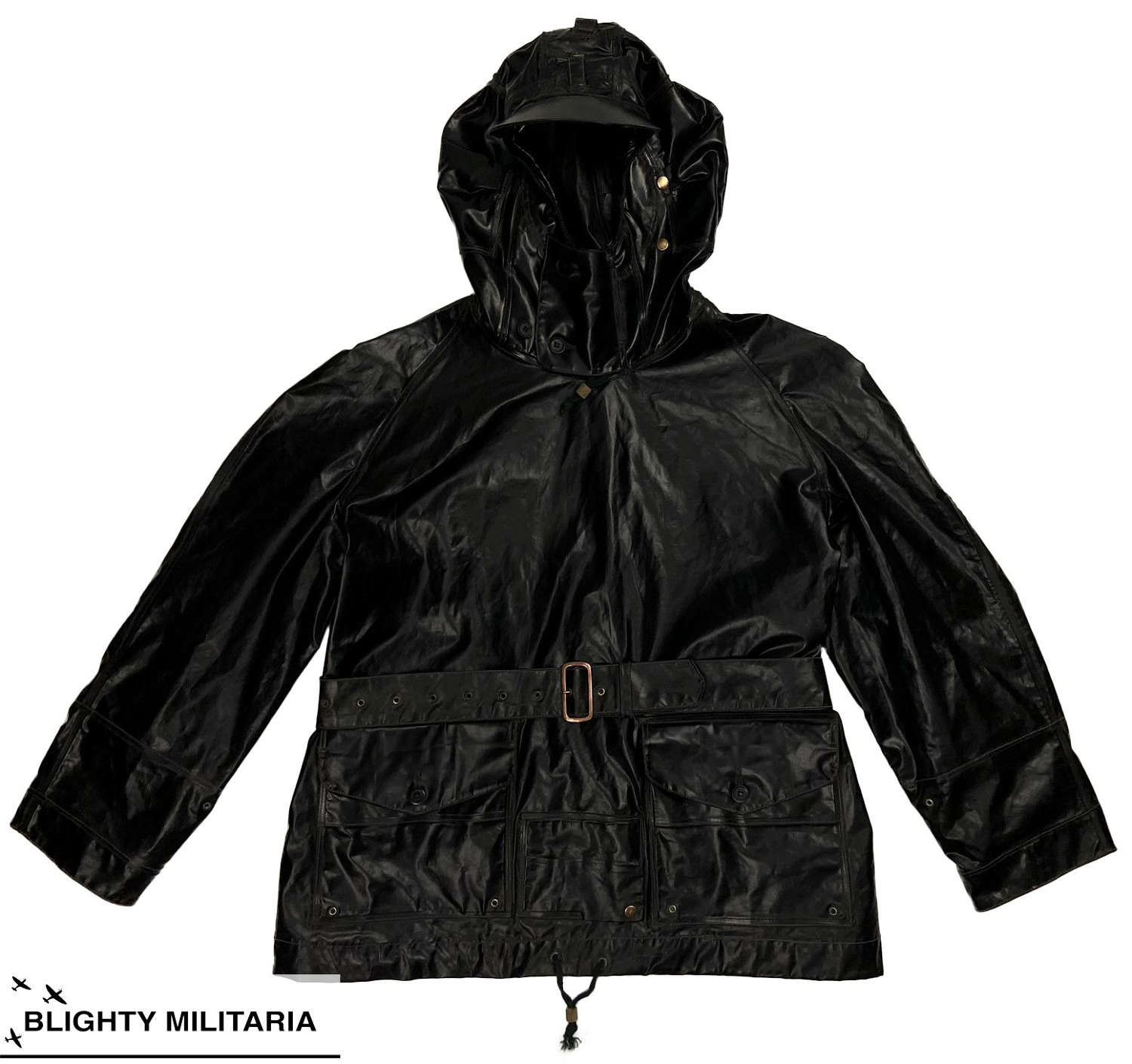 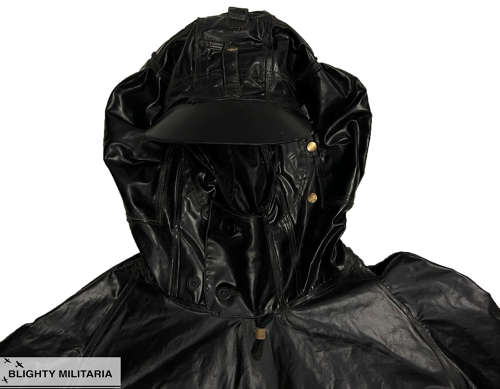 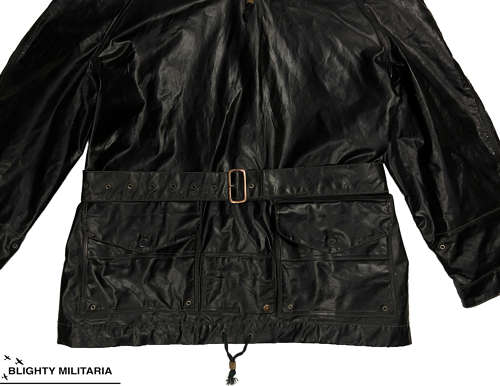 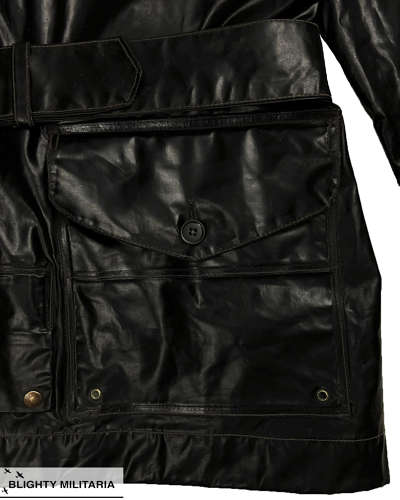 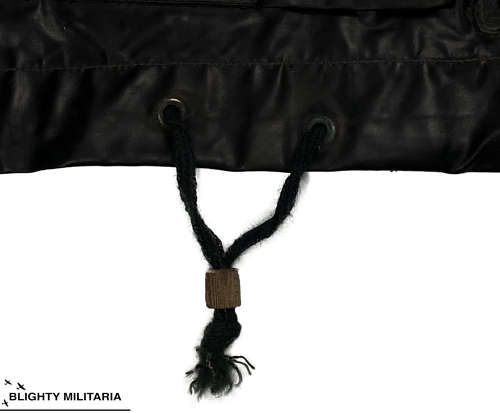 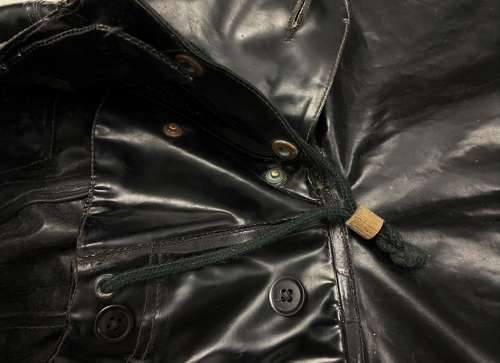 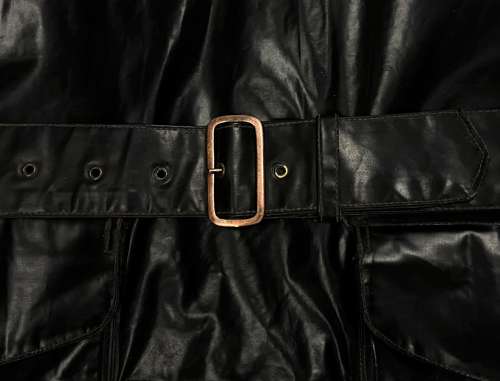 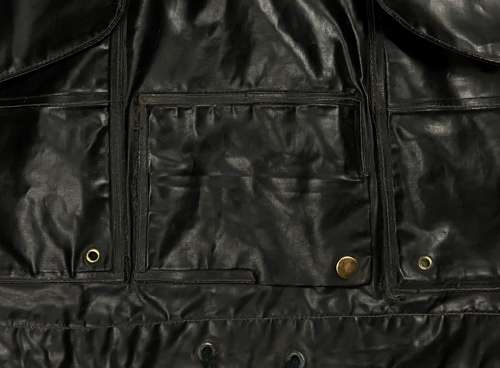 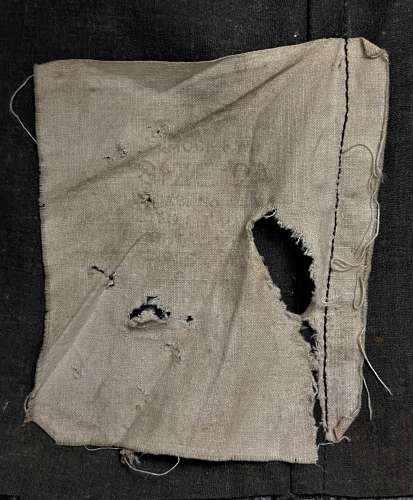 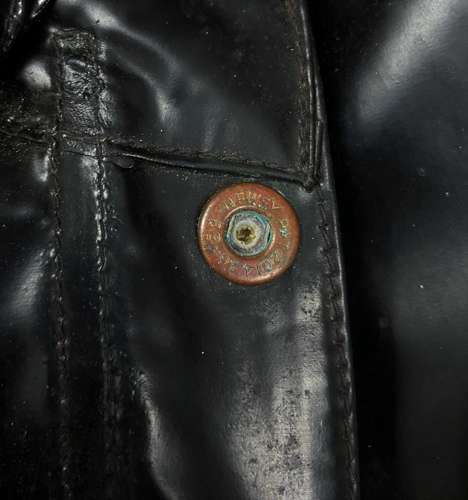 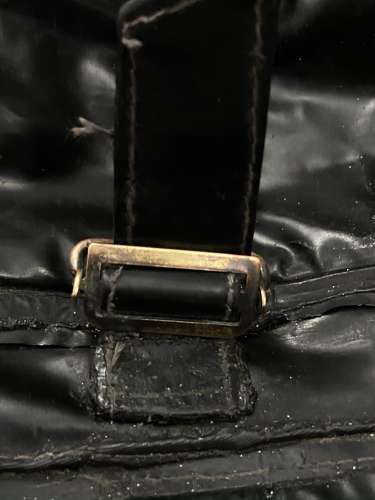 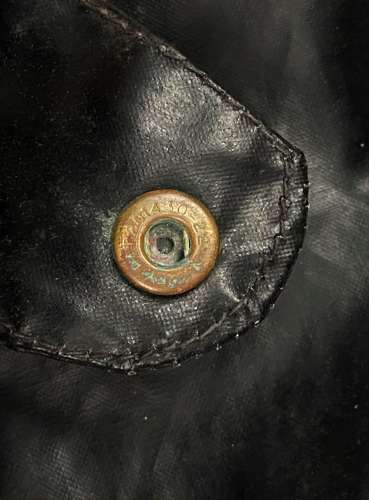 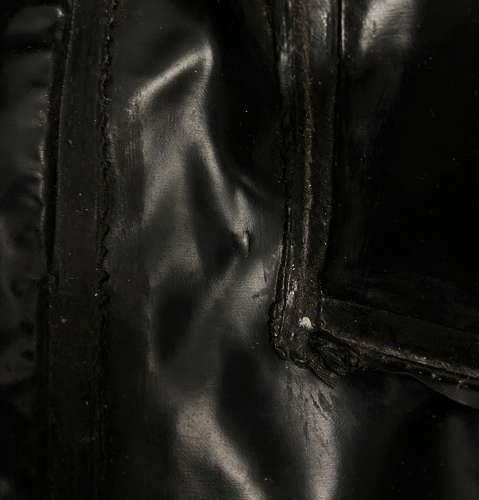 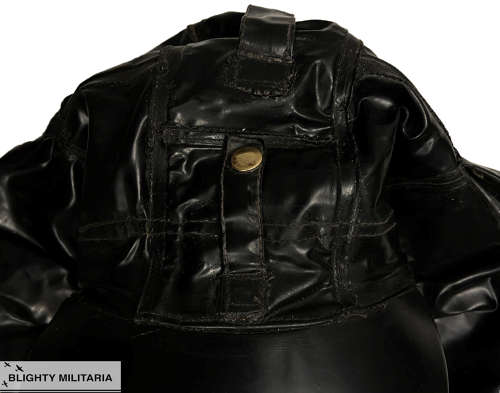 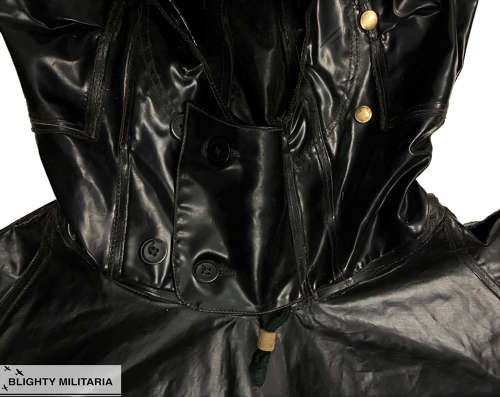 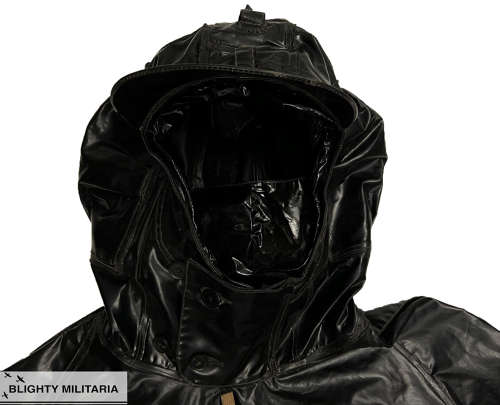 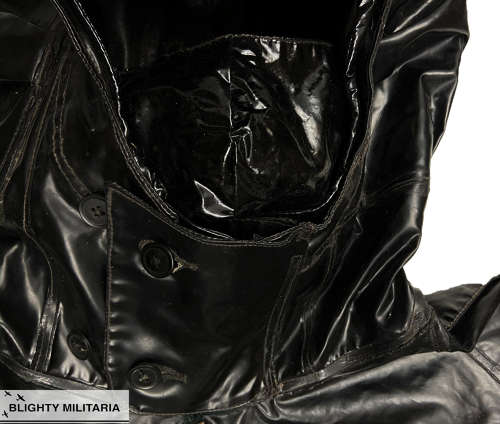 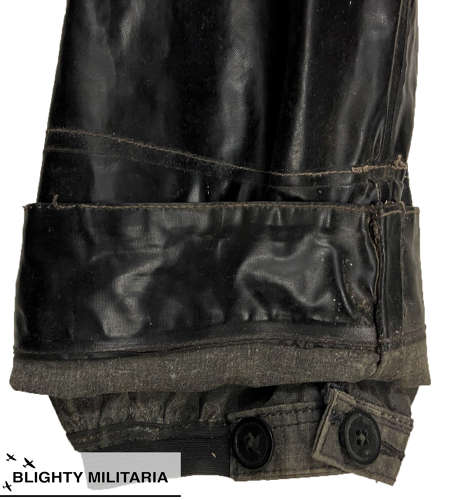 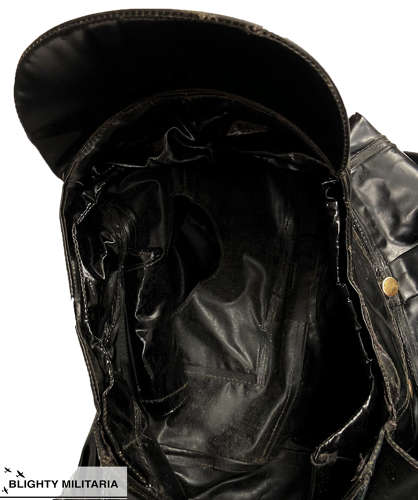 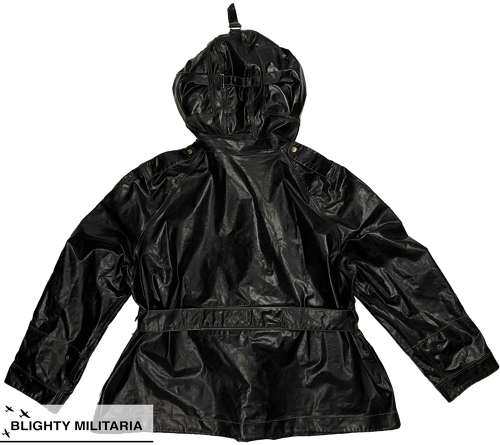 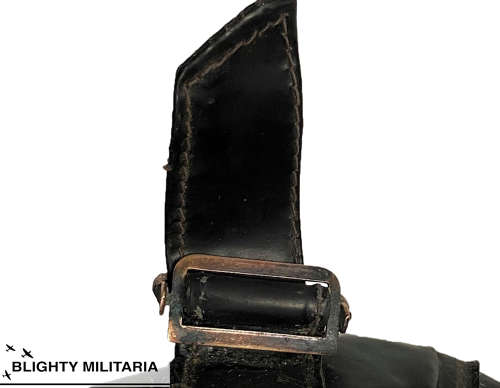 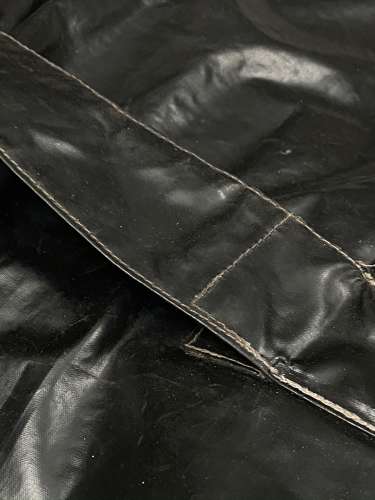 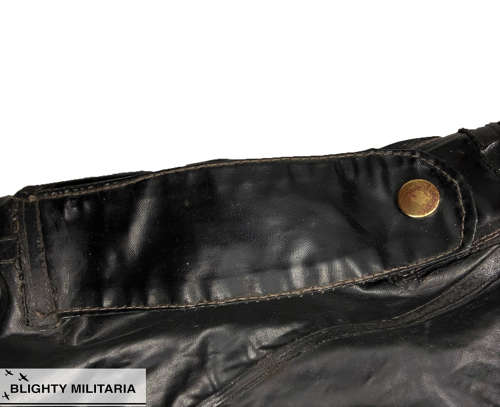 First introduced in 1953 to replace the earlier oil skin items issued to the royal navy, this smock is made from a polyvinyl chloride fabric which is often referred to as 'PVC'. This material was considered cutting edge in the early 1950s and had waterproof and windproof qualities unlike anything which had been made before. This example is fitted with brass 'Newey' brand press studs throughout and has brass eyelets to the waist belt and a large brass buckle. A drawstring is fitted around the hood and to the bottom return of the garment. Both feature wooden toggles which are typical of British Military items from this period.

The design of the smock is the same as the ventile flight deck smock which was made for the Royal Navy for a number of years. The smock is pulled on over the head and features a large hood which can accomodate a headset inside. It features straps to the top and the rear which fasten with brass buckles and allow the hood to be pulled tight onto the wearer's head. The front of the hood buttons around the wearer's chin and has two different buttoning positions. Above this is a roll out section which creates a face mask which fastens inside the hood with more brass 'Newey' pop studs. The hood also features a peak which is stiff to stop it from obscuring the wearer's vision.

Two patch pockets are located to the front of the smock as is a small tab which fastens with a single stud to the top right corner. Inside the cuff is a storm cuff which fastens with a button. The original label is also present to the interior although it is well worn with only some of the writing being legible. The title of 'Smock F. W.' is visible as is the size of 2A.

The smock is in very good condition for its age as can be seen in the pictures. It has clearly been issued and worn but does not show any signs of excessive wear or use. It is still very wearable and displays well and is pretty clean overall with a hint of 'salty'. The only flaw I can find is an extremely small tear about 1mm long to the rear of the hood. This is detailed in picture

This is the sister to the Ventile Flight Deck Smock but is much rarer and of much earlier manufacture than most ventile smocks offered on the market. This is a must have for the serious vintage military collector!