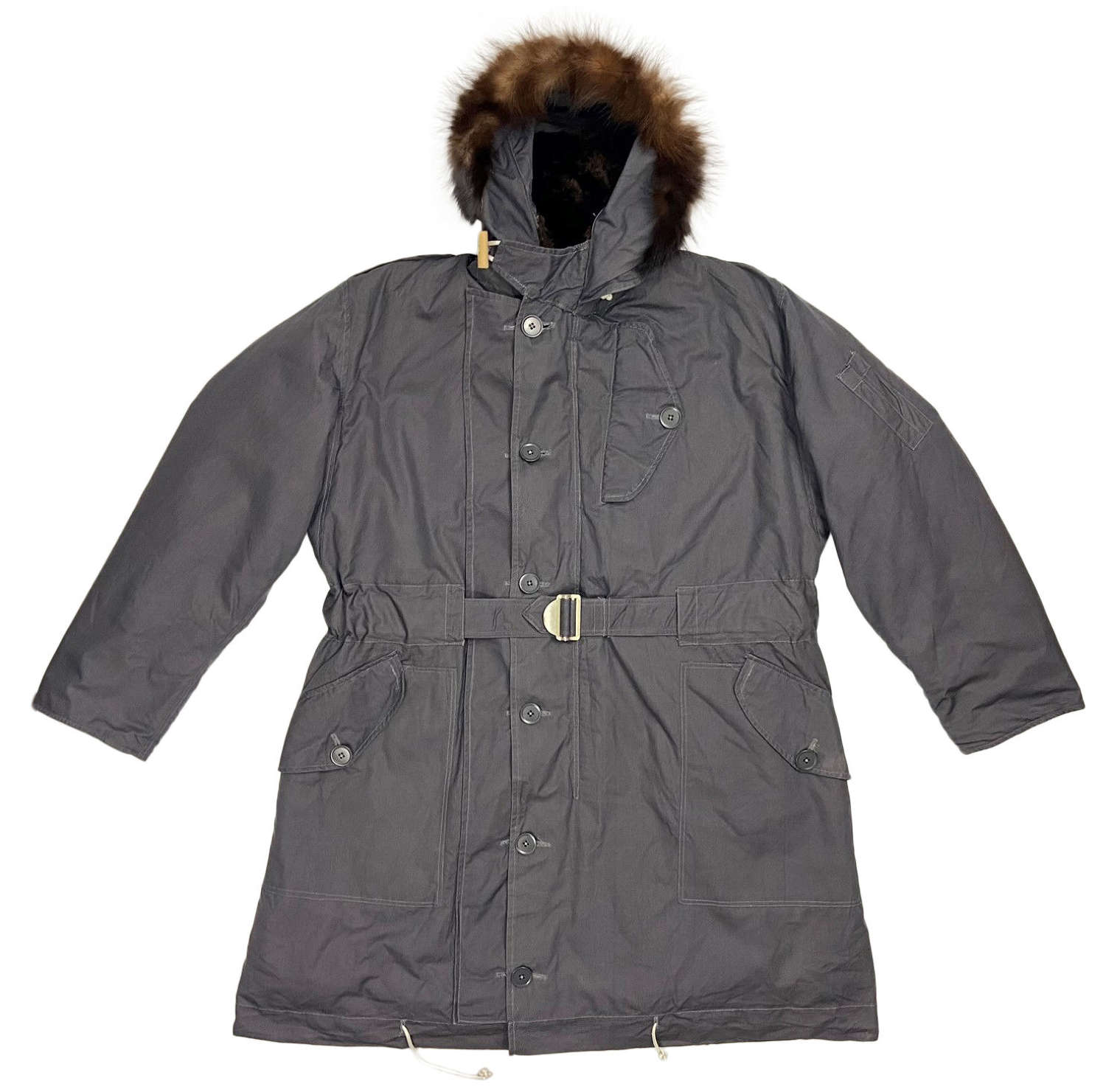 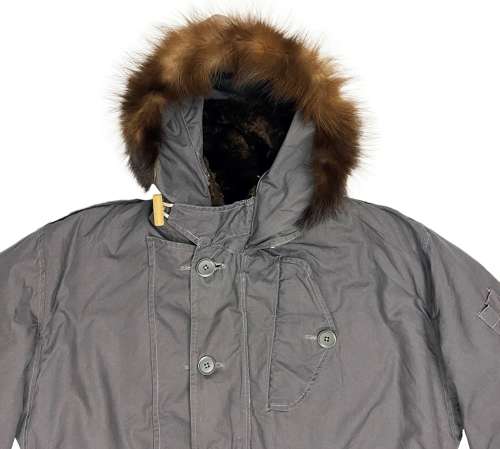 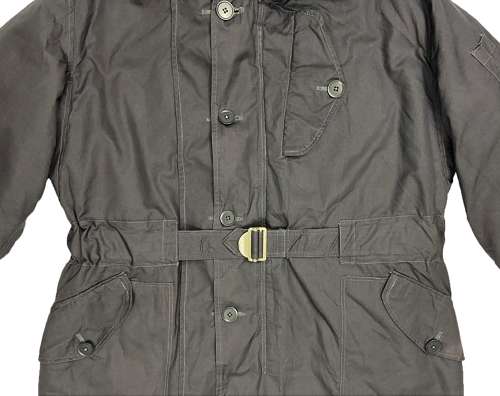 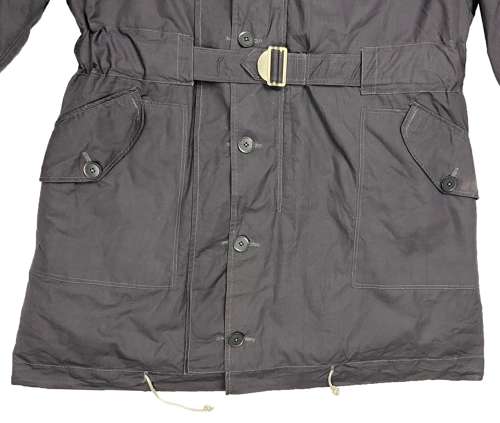 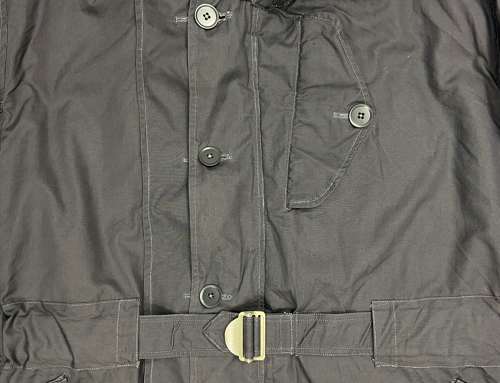 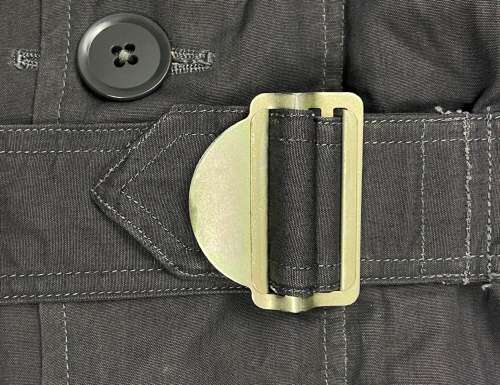 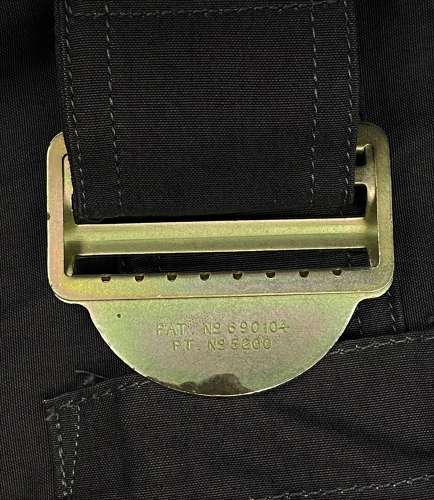 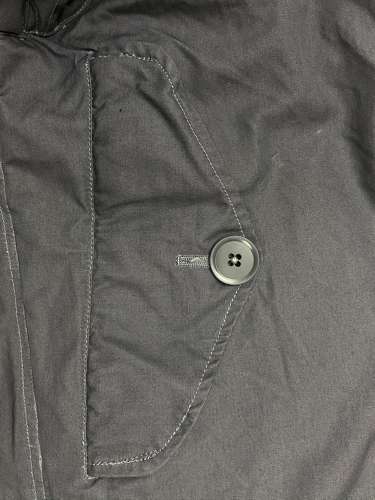 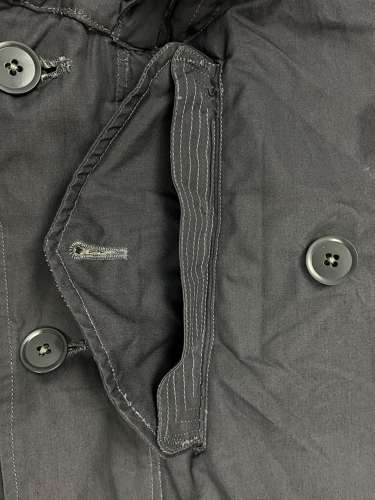 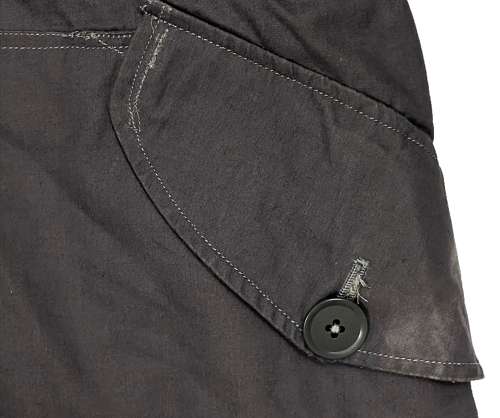 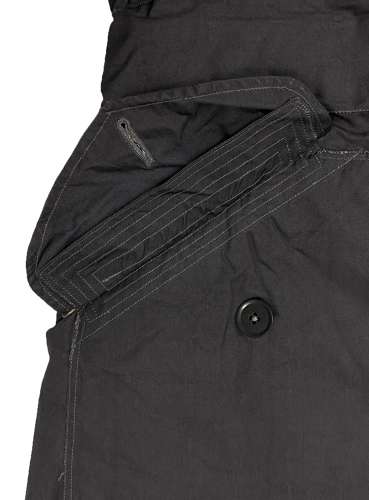 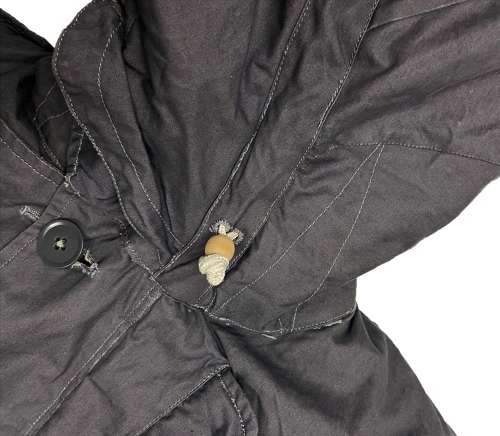 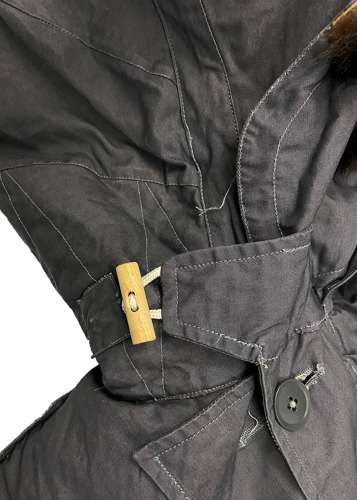 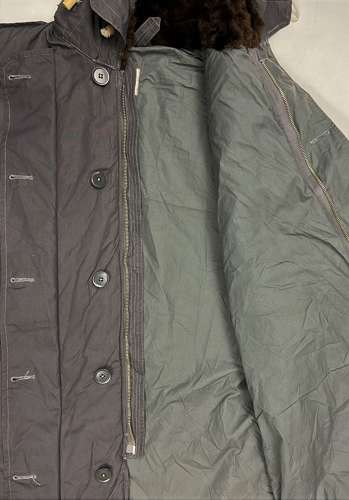 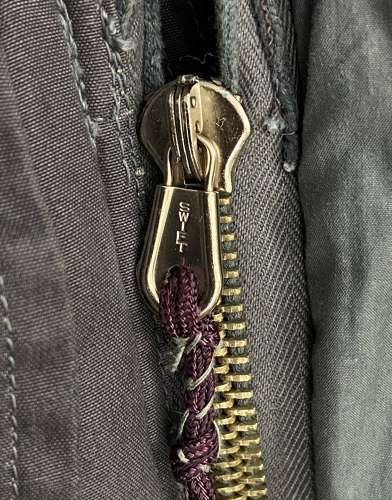 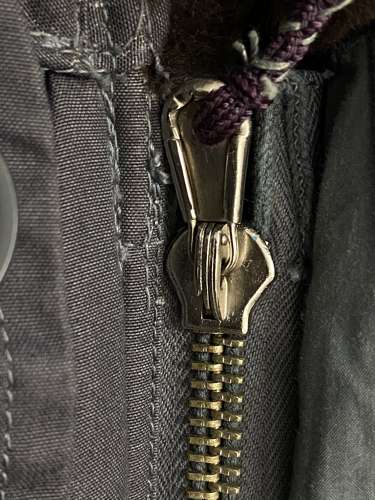 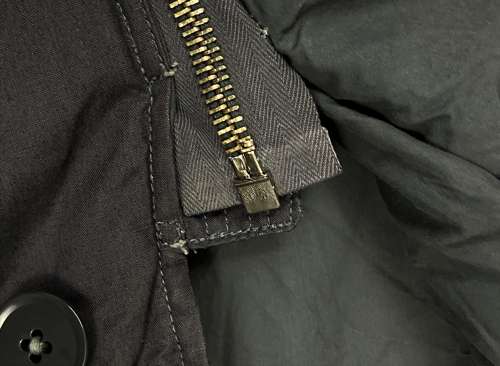 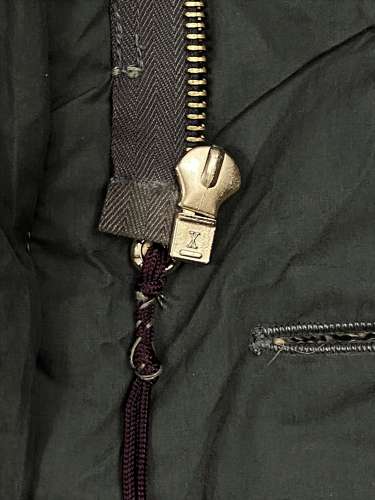 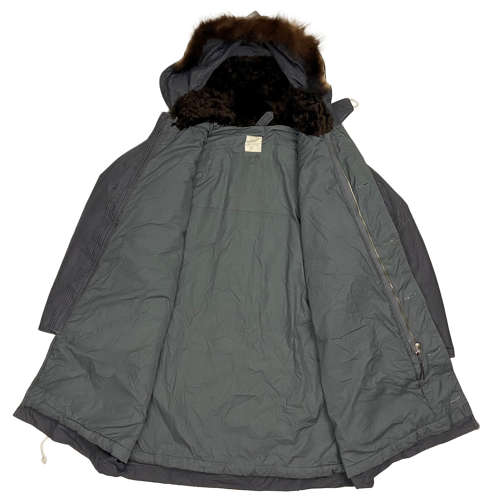 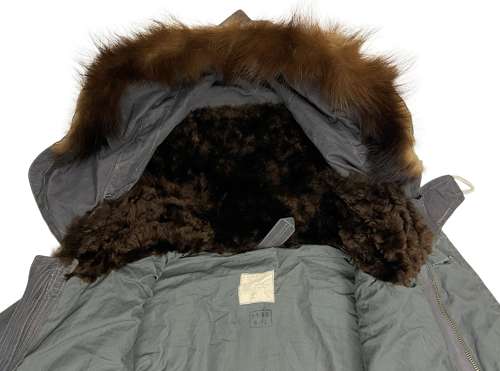 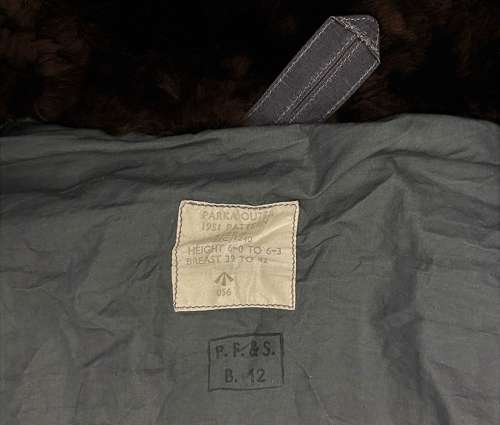 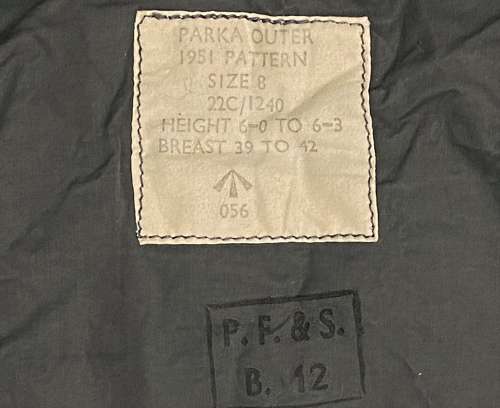 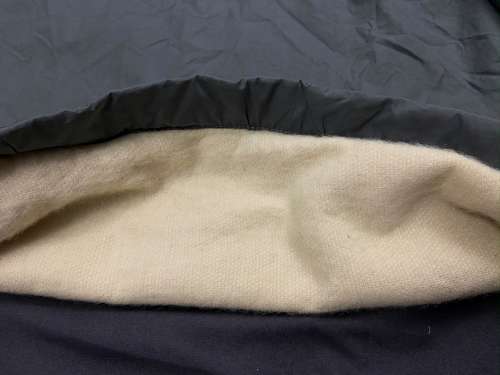 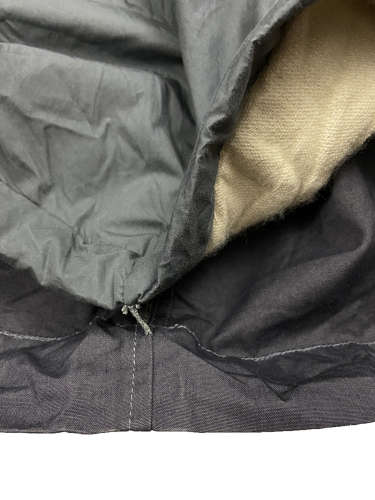 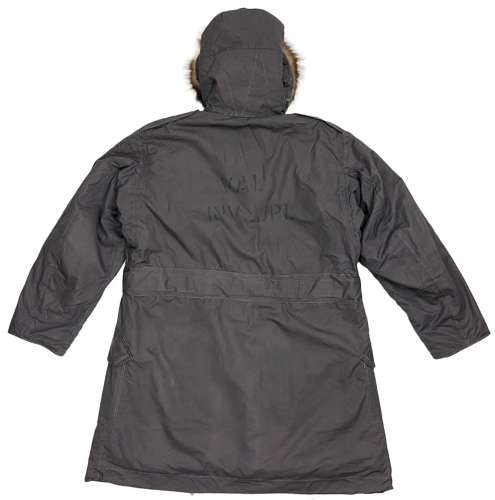 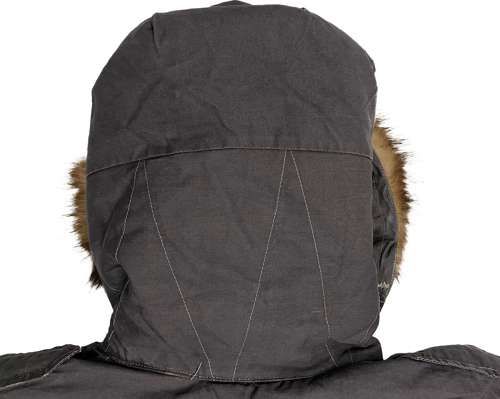 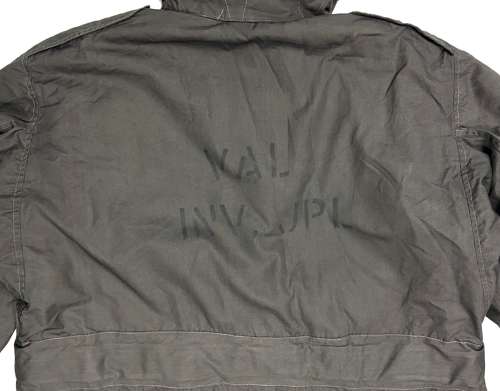 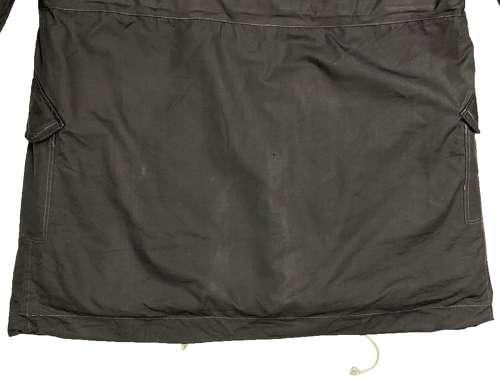 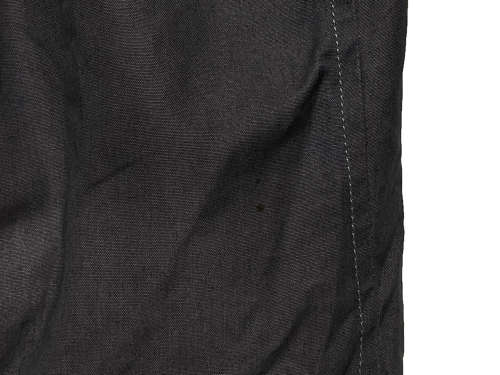 Officially designated 'Parka Outer 1951 Pattern', these parkas were issued to RAF personnel for wearing in extremely cold temperatures. Made from a grey coloured ventile material which is famous for its windproof and waterproof qualities, this parka has a plethora of details. The front of the coat fastens with a 'Swift' branded zipper which is nickel plated. There is then a double flap which buttons over the zip making the coat extra windproof. An angled flapped pocket is located to the chest and two more similar pockets can be found at the hips. An integral waist belt is located to the centre of the coat and features a metal buckle of the same style used for all ventile smocks, parkas and flying suits during the 1950s. A white drawstring is fitted to the bottom hem to allow the coat to be pulled in tight at the bottom. The hood also features a similar drawstring which features a wooden stopper. The hood is an amazing and large snorkel style of incredible construction. It features a wire to the brim to keep it inshape and is trimmed with fur. It can be fastened tight using the wooden toggle in the right as detailed in the pictures. A pen pocket is located to the left sleeve and is a direct copy of those used on American flying jackets, first seen in the second world war. The rear of the jacket has been stencilled in black which reads 'VAL INV. JPL' which is a nice period addition and makes the garment unique.

The interior of the coat features a cream coloured blanket lining between the outer ventile fabric and the cotton lining which is in fact stitched to the inside of the cream coloured wool. Part of the interior of the hood features a soft, brown coloured fur collar below which is a hanging loop. The original label is present below this and bears the contract number of 22C/1240, the size of 8 and the War Department broad arrow marking. Below this is a black ink stamp in a square box which reads P. F. & S. B 12'.

The coat is in excellent condition as can be seen in the pictures. It has a very bright and fresh appearance overall and shows no real signs of previous wear and use. There are some faint marks to the rear, another to one of the pocket flaps and two extremely small spots to one of the sleeves. All of these flaws are detailed in the pictures. Whilst this is a vintage item with some small flaws, the general condition of the coat is absolutely fantastic. Please study the pictures before purchasing to satisfy yourself of condition.