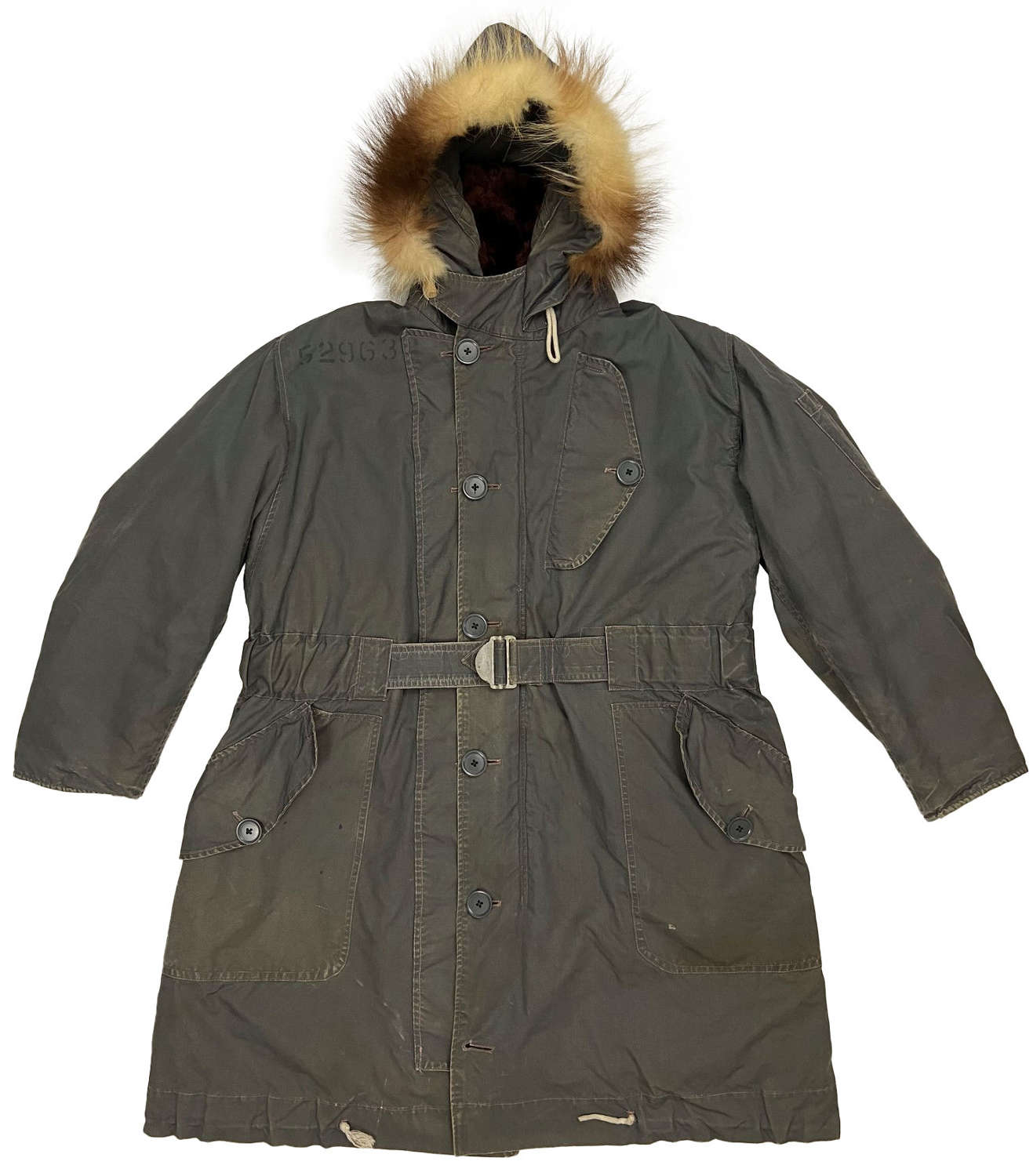 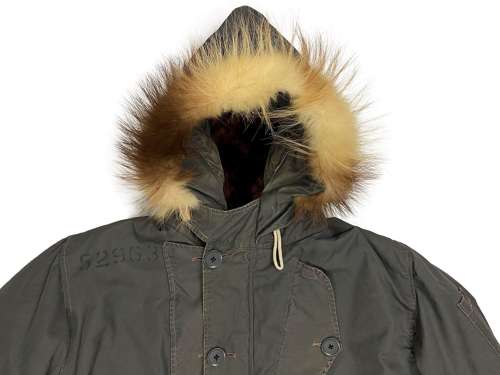 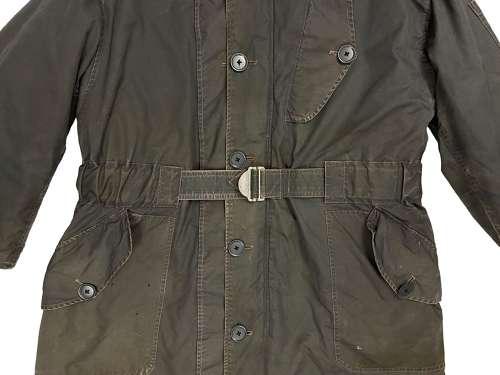 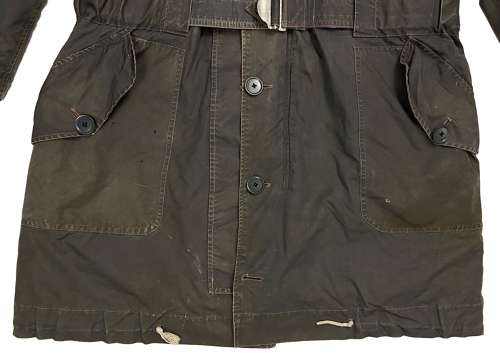 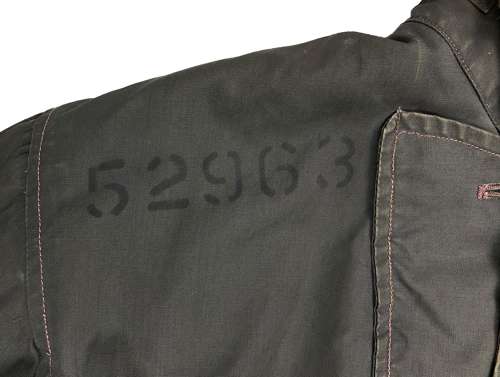 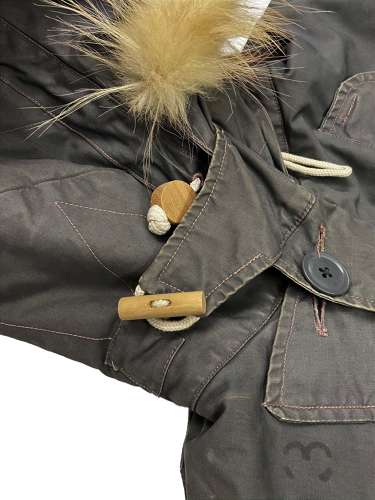 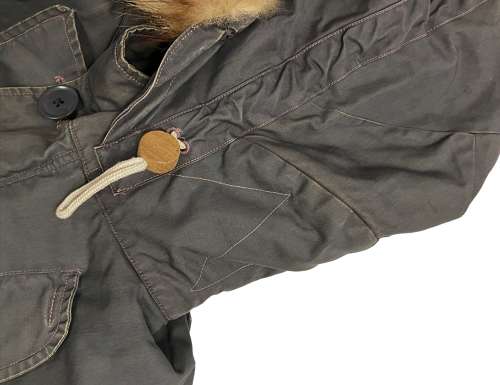 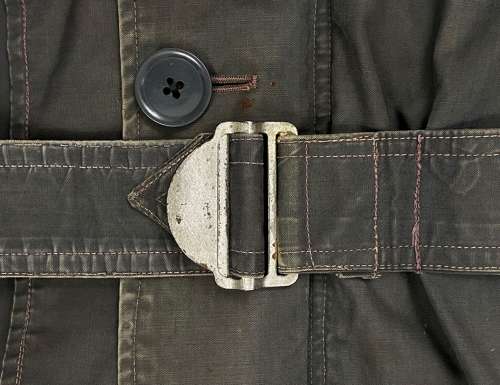 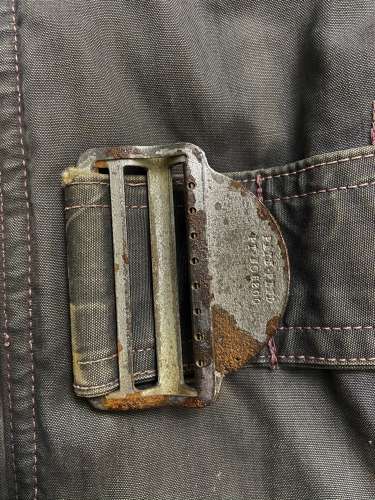 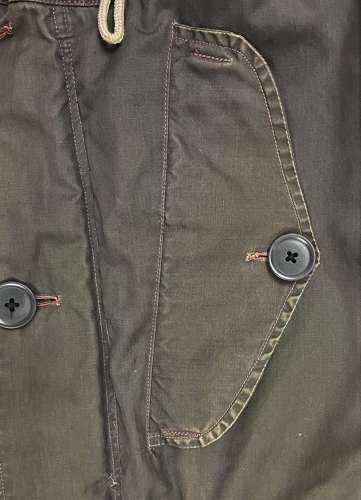 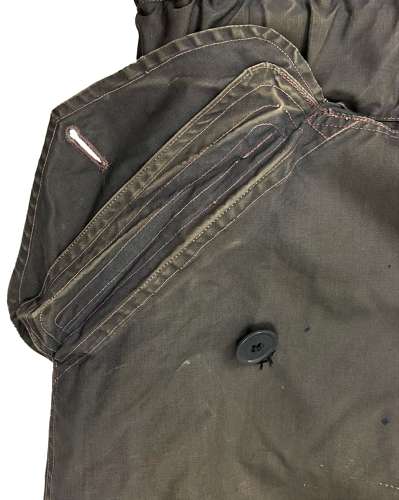 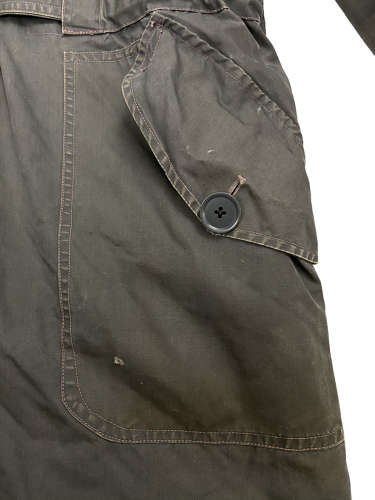 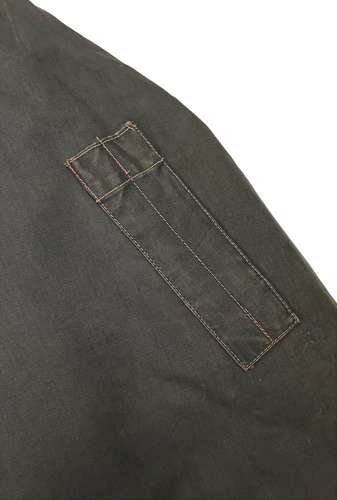 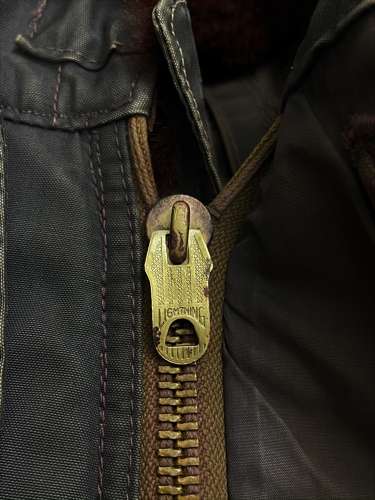 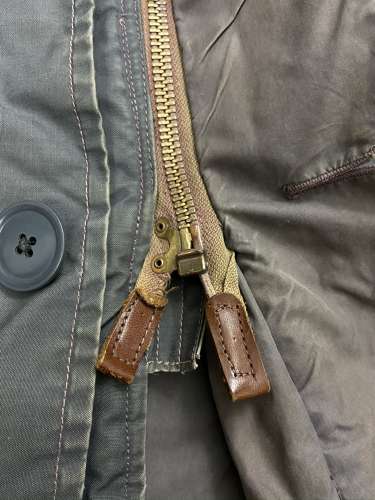 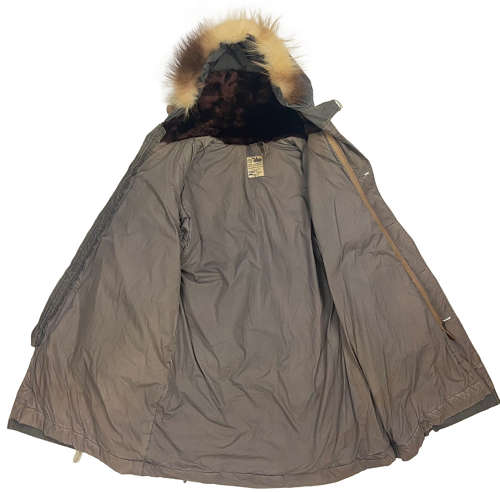 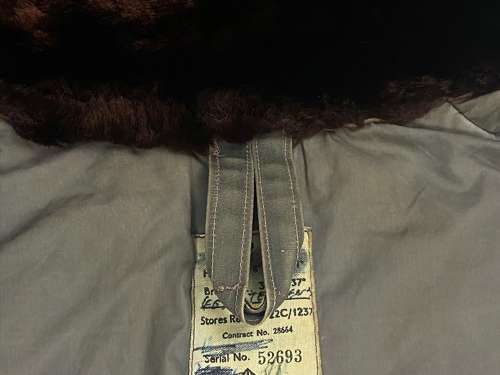 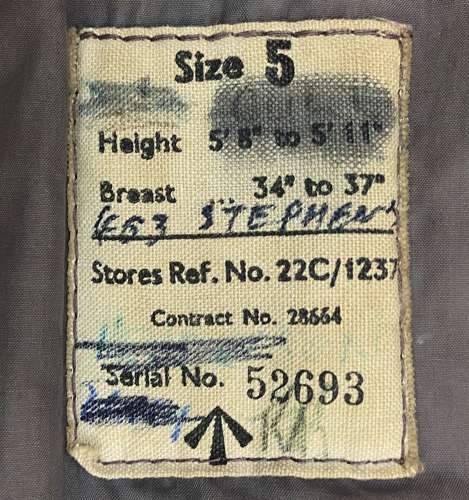 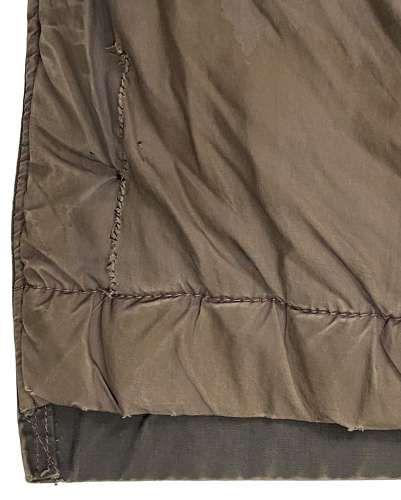 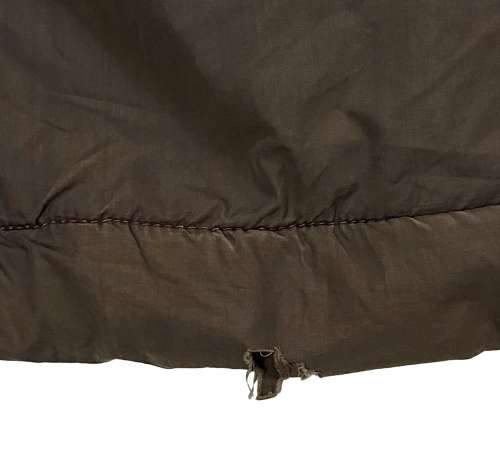 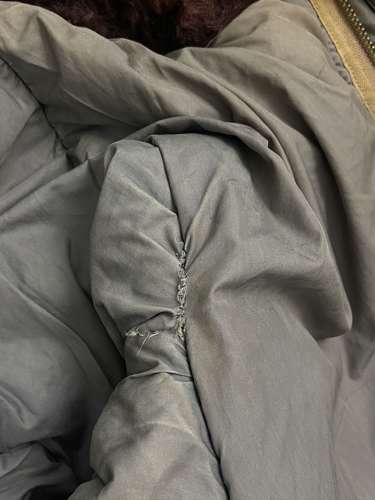 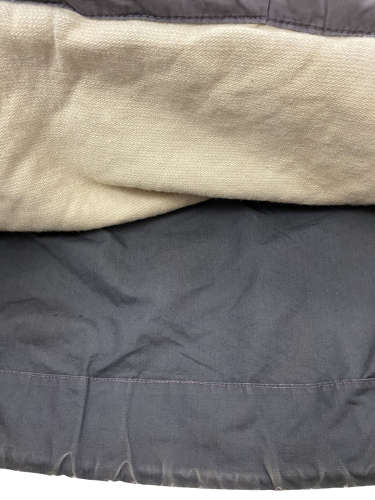 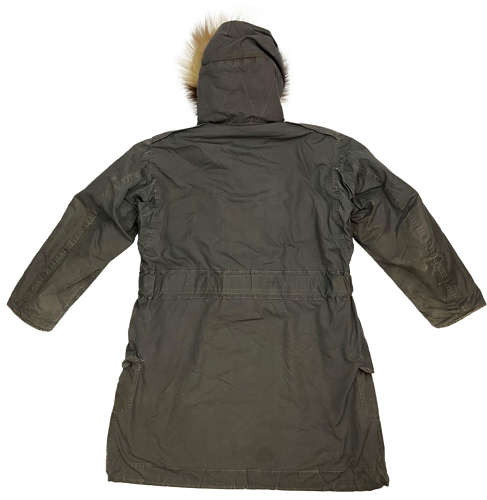 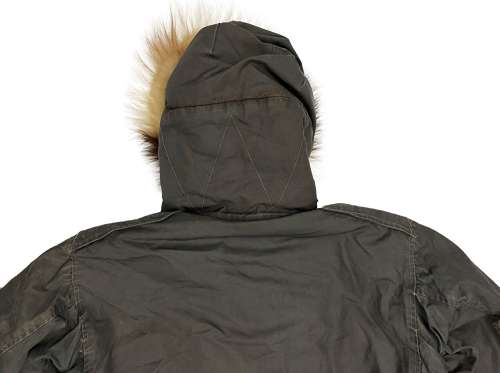 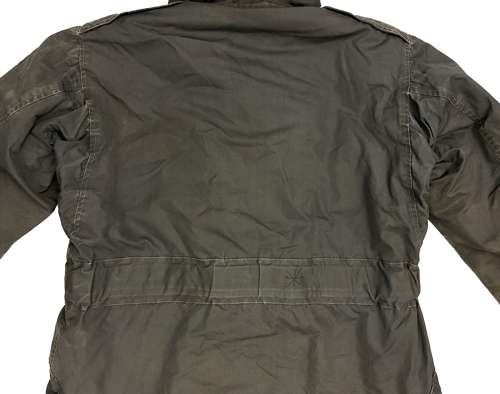 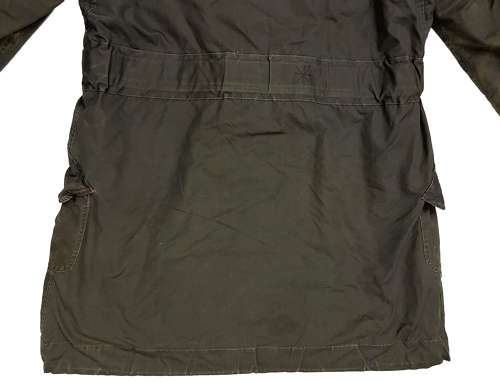 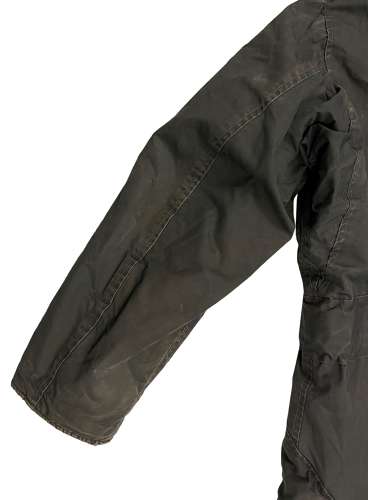 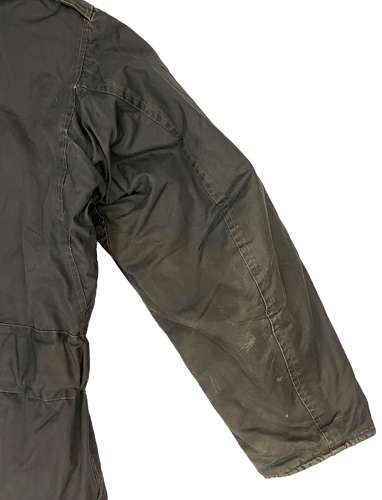 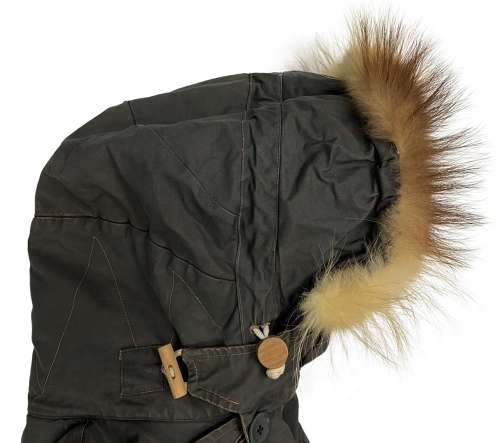 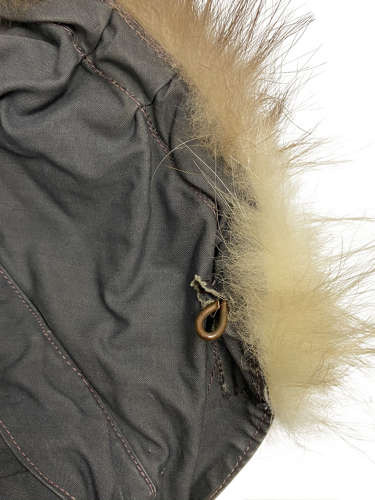 A rare original 1951 Pattern RAF Ventile Parka in a size 5 and dating from the early 1950s.

This coat is particularly rare as it is an early manufactured example rather than the 1960s and 1970s coats often found for sale. It features a brass 'Lightning' brand zipper and earlier style label which is made of linen.

Officially designated 'Parka Outer 1951 Pattern', these parkas were issued to RAF personnel for wearing in extremely cold temperatures. Made from a grey coloured ventile material which is famous for its windproof and waterproof qualities, this parka has a plethora of details. The front of the coat fastens with a 'Lightning' branded zipper which is brass and typical of the early 1950s. There is then a double flap which buttons over the zip making the coat extra windproof. An angled flapped pocket is located to the chest and two more similar pockets can be found at the hips. An integral waist belt is located to the centre of the coat and features a metal buckle of the same style used for all ventile smocks, parkas and flying suits during the 1950s. A white drawstring is fitted to the bottom hem to allow the coat to be pulled in tight at the bottom. The hood also features a similar drawstring which features a wooden stopper. The hood is an amazing and large snorkel style of incredible construction. It features a brass wire to the brim to keep it in shape and is trimmed with fur. It can be fastened tight using the wooden toggle in the right as detailed in the pictures. A pen pocket is located to the left sleeve and is a direct copy of those used on American flying jackets, first seen in the second world war. A stencil has been applied to the right shoulder which reads '52963'.

The interior of the coat features a cream coloured blanket lining between the outer ventile fabric and the cotton lining which is in fact stitched to the inside of the cream coloured wool. Part of the interior of the hood features a soft, brown coloured fur collar below which is a hanging loop. The original label is present below this and bears the RAF stores reference number of 22C/1237, the size of 5 and the War Department broad arrow marking. The serial number has been added to the label which matches the number stenciled to the front of the shoulder and a previous owner has marked their name in blue ink which reads 'Stephens'.

The coat is large as it is intended to be worn as an outer layer over the top of a uniform. They are cut extremely wide for a loose fit which needs to be taken into account with the measurements. When laid flat the coat measures -

The coat is in worn condition and was clearly issued. It has taken on a fantastic patina which would be impossible to replicate! There are two repairs to the lining and there is some corrosion to the waist buckle as is detailed in the pictures. There is also a small hole to the skirt and the brass wire which is fitted around the hood has come through the ventile fabric at one end, both of which are again shown in the pictures. Aside from this there are general signs of age and wear which are to be expected from a vintage military coat of this kind. The coat is still very wearable and displays very well. Please study the pictures before purchasing to satisfy yourself of the condition before purchasing.

A rare and very sought after early example of this pattern of British military coat which is rarely offered for sale. These coats were built for warmth and have so many amazing details making them a must have for the serious vintage military collector!