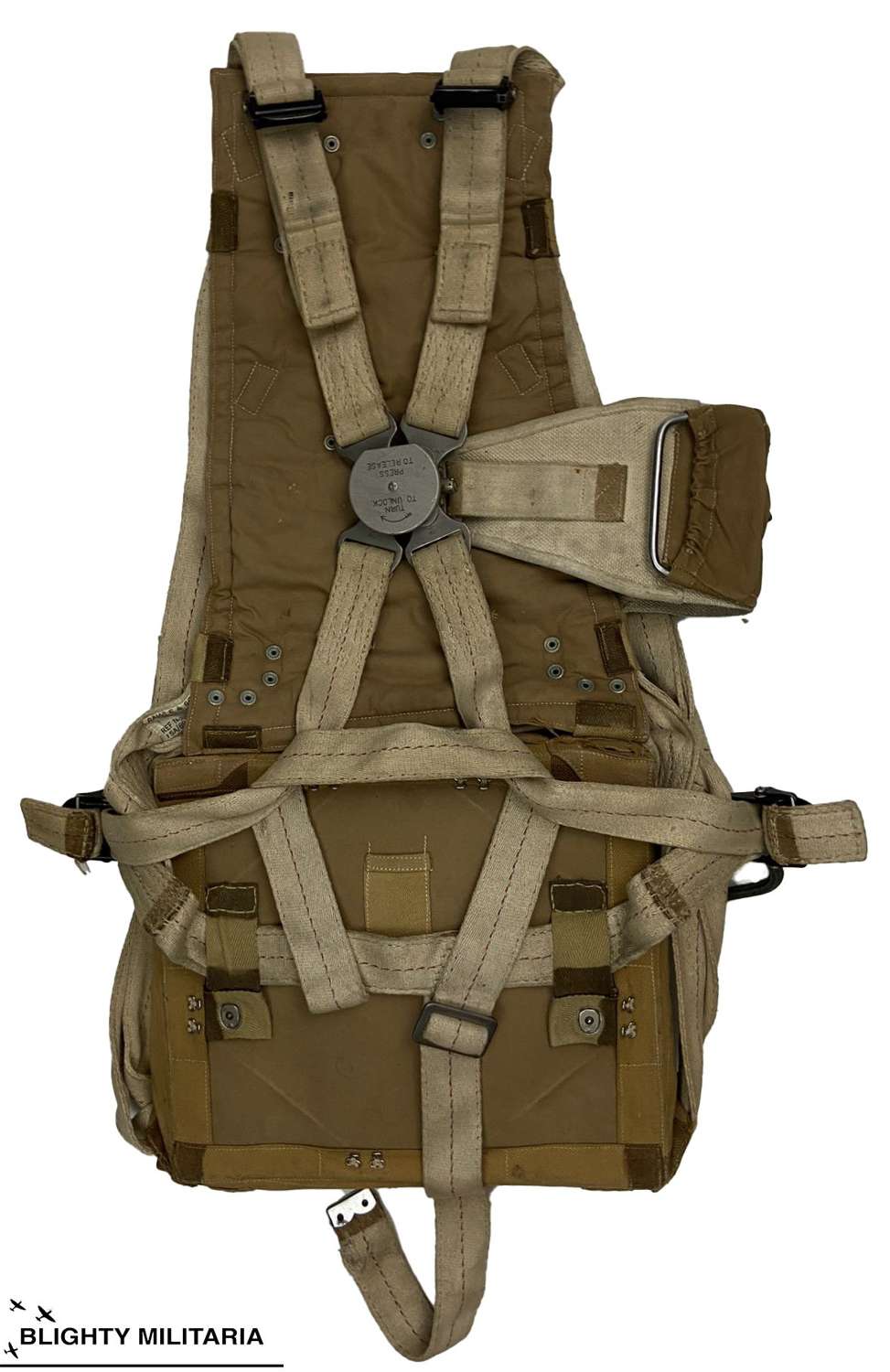 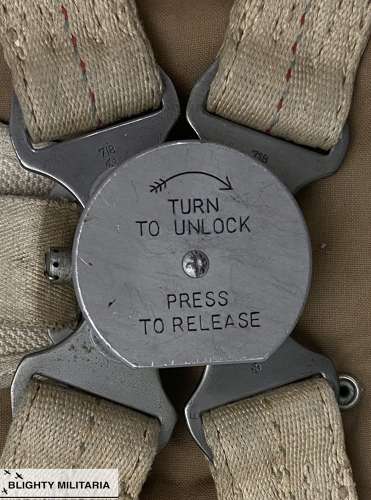 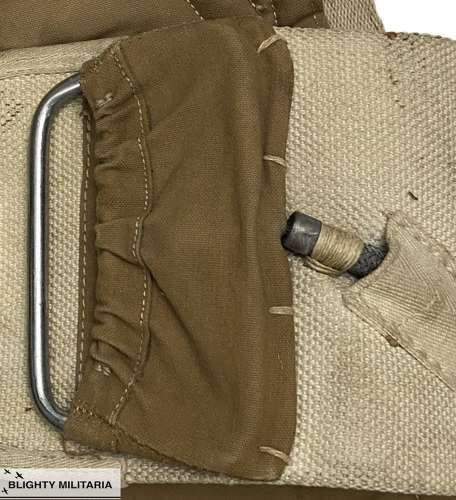 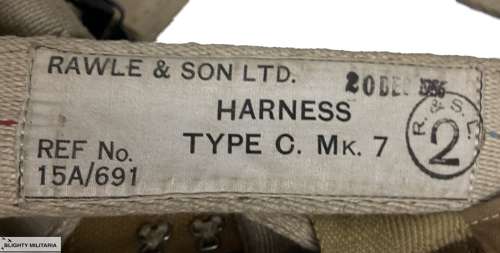 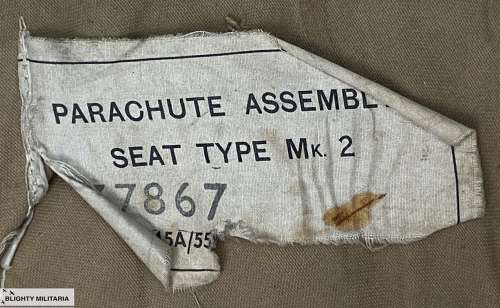 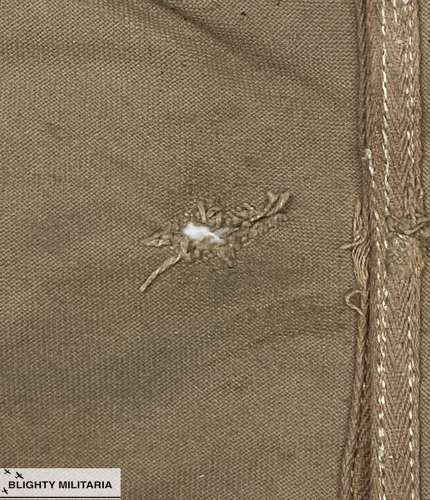 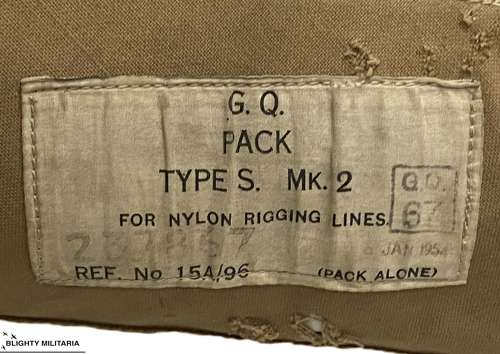 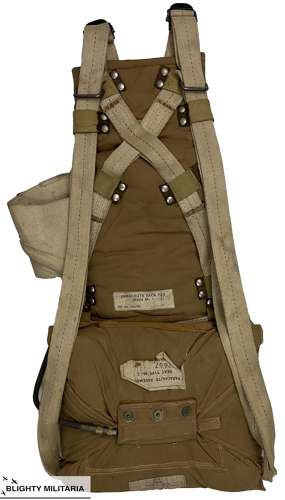 An original RAF MK2 Seat Type parachute assembly dating from the early to mid 1950s and in good condition.

Officially designated 'Parachute, Single point, quick release with seat pack. Type C-2.', this pattern of parachute was used by the RAF for a number of years and is often referred to as the 'seat type' or 'pilot's parachute'.

The assembly features a nice, white coloured webbing harness as was used during the Second World War. These were replaced with brown coloured webbing which look very different. The original label is still attached and bears the title of 'Harness Type C. Mk. 7', the reference number 15A/691 and the maker's name of 'Rawle & Son Ltd'. There is also an issue stamp from the 20th of December 1956, meaning the harness was made at some point prior to this. The Quick Release Box is present and functions as it should. It has a round front plate with a flat edge which was introduced during WW2 which is marked 'Turn to unlock Press to release' and features a directional arrow. The waist belt and ripcord housing are present and a chrome plated grab handle is fitted and is attached to the cord.

The back pad is a good clean example made from a khaki coloured canvas as used during WW2. The original label is still present and bears the title of 'Parachute Back Pad, Irvin Mk .1' along with the stores reference of 15A/191. There is an issue date of December 1953 which means that it was made prior to this date. It is in clean condition overall and displays well with limited signs of wear and use. All the straps and press studs are present.

The parachute pack is present and is fitted with a nylon canopy which appears to be correctly packed.It is made from a khaki coloured canvas, again the same as used during WW2, and it retains its original labels. The first reads 'G.Q. Pack Type Mk. 2 for nylon rigging lines' and bears the stores code of 15A/96 along with the issue date of 6 Jan 1954. There is a second label which is only partly attached and bears the title 'Parachute Assembly Seat Type Mk. 2'. Beneath this is a hole which is detailed in picture 7 and there are some other small holes to the pack so please take time to study the pictures before purchasing. The hole would not be seen when displayed on a mannequin as they face downwards.

Whilst there are some subtle differences between this example and the wartime pattern, it would make a great addition to any collection and would look great displayed on a mannequin or could be used for re-enactment. A good stand-in for a war dated example and much cheaper!


Please note this is a very heavy item and the postage cost calculated at checkout may ne wrong. Please contact me for more information.