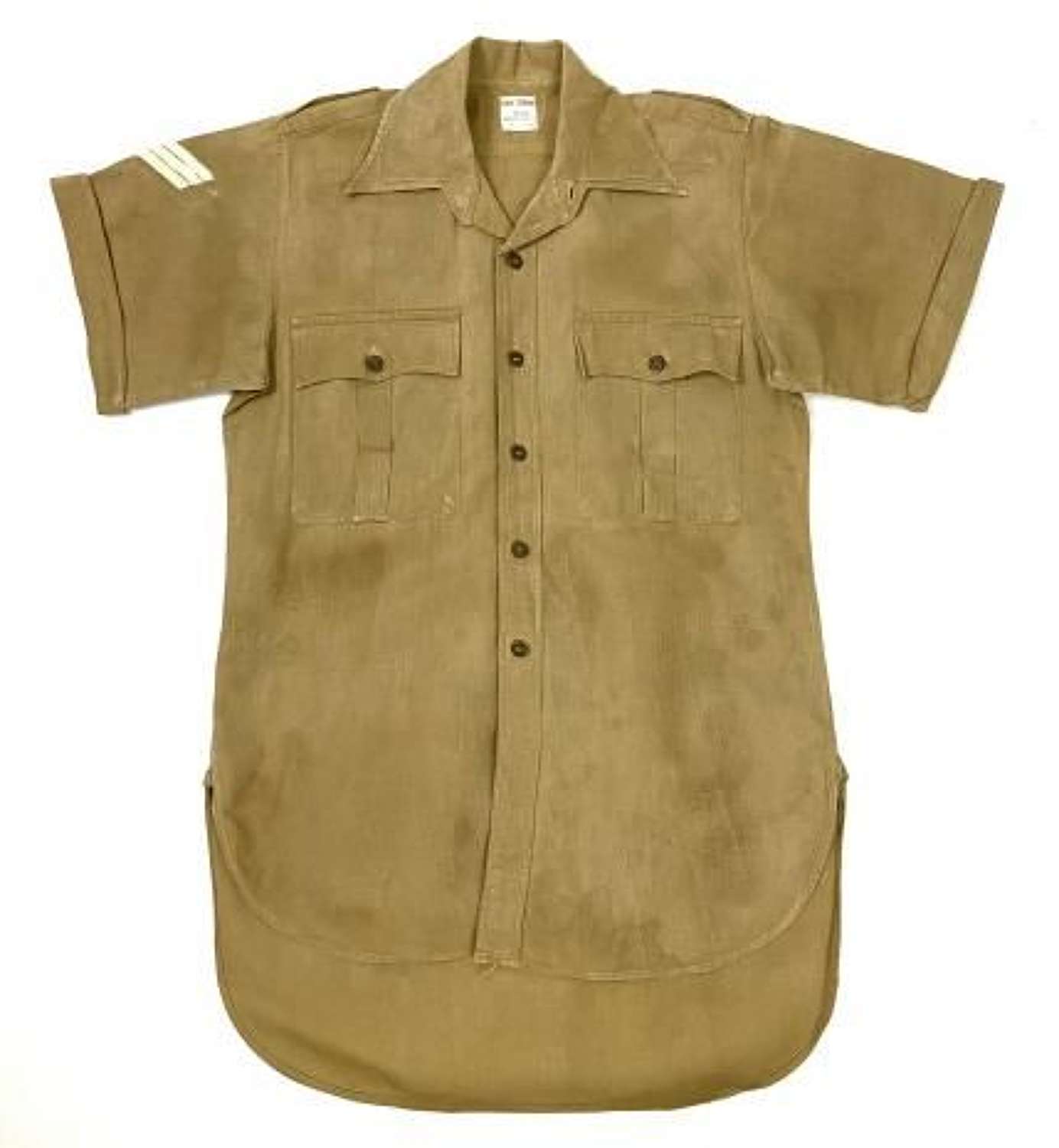 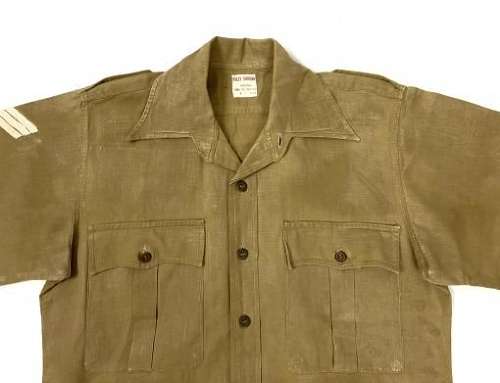 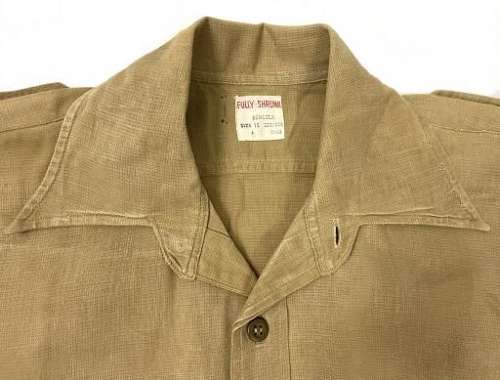 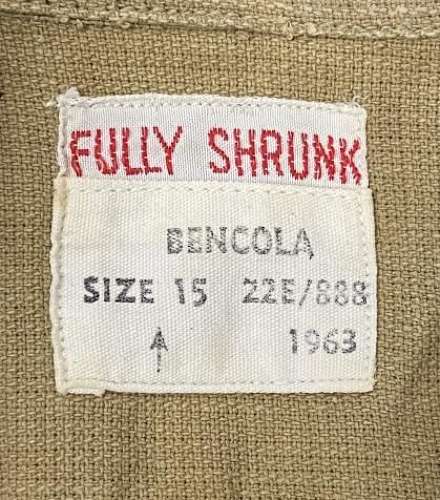 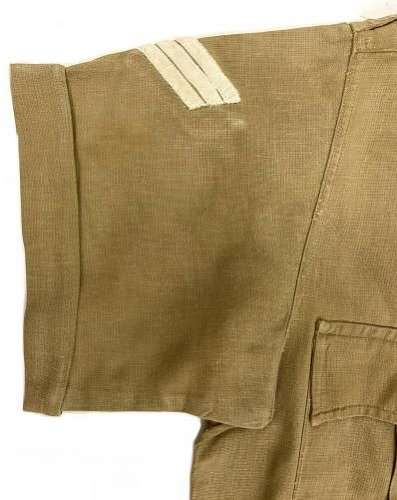 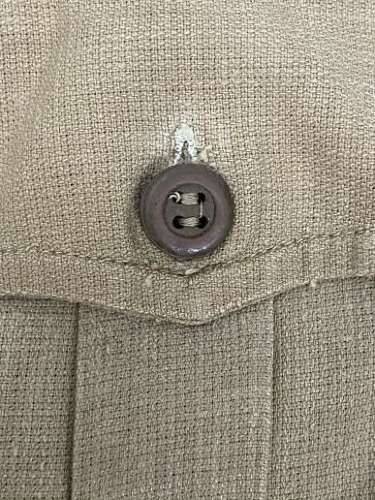 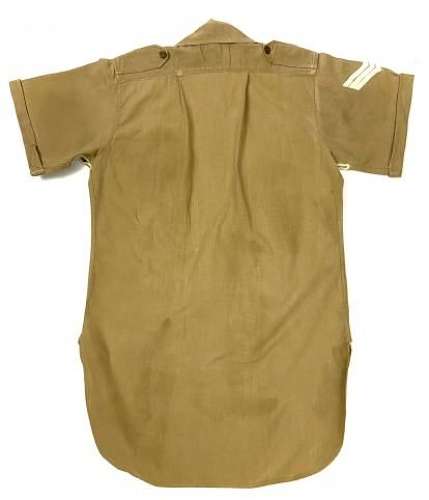 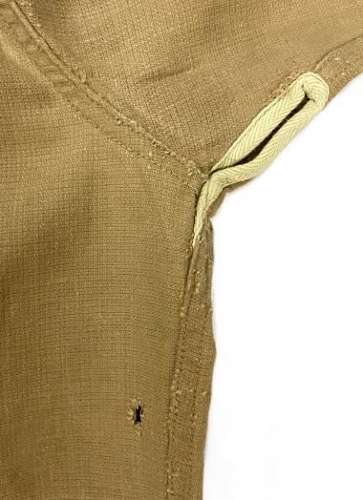 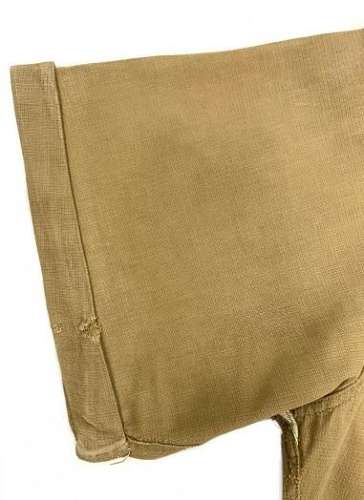 This shirt belonged to a Sergeant in the RAF who served in the post-war years. It is made from cellular cotton which is often referred to as 'Aertex'. It is a lightweight, breathable fabric which was popular during the Second World War and in the subsequent post-war years for tropical clothing.

The shirt features a full button front and short sleeves which were must likely cut down from long sleeves. They feature a nice turn-back detail which would have been added at the same time. The shirt is fitted with green rubber buttons as usually found on British made KD from this period. Two pleated chest pockets are also in evidence and feature scalloped pocket flaps. The epaulettes are still present to the shoulders and it features a particularly nice collar shape which has been pressed open.

Sergeant stripes are fitted to the sleeve and are the white tape style often employed on shirts and jumpers. On close inspection there is evidence of where corporal stripes were fitted before the original owner was promoted which is a nice detail.

Inside the shirt the original label is still present and states the manufacturer as 'Bencola' who are a less common maker. The size is stated as 15 which refers to the collar and the 1963 date is visible. The RAF contract number of 22E/883 is also present as is the War Department broad arrow marking. A smaller label is fitted above this and reads 'FULLY SHRUNK' and is typical of those found on shirts of this period.

The shirt is in good condition with some signs of wear and use in keeping with its age. There are some watermarks but these will most likely come out with careful laundering. There is a small hole to the rear of the left sleeve and another below the vent of the right sleeve to the rear of the shirt. It is a sound, wearable item but may have small issues consummate with its vintage. Please study the pictures for a better idea of condition.