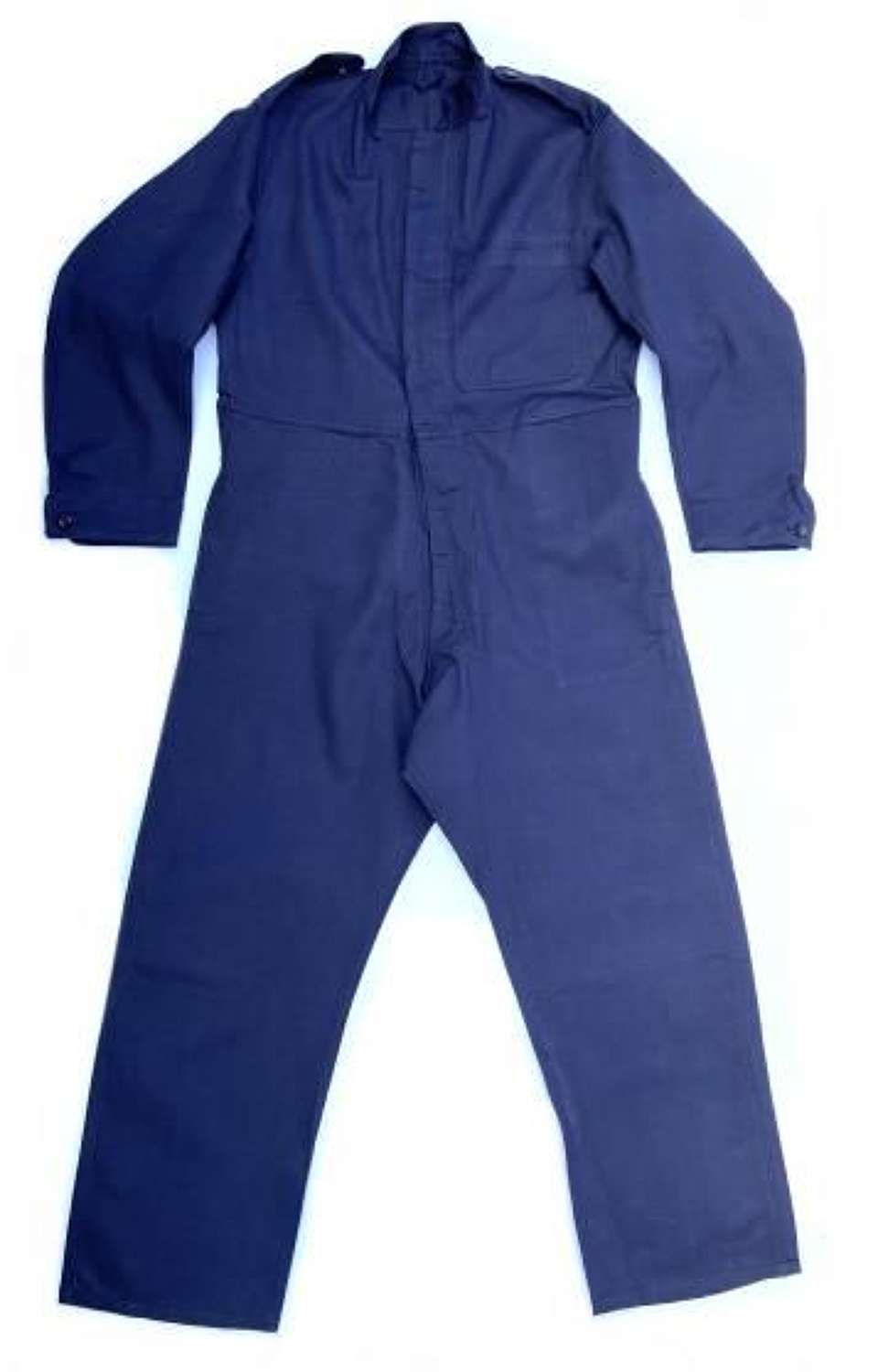 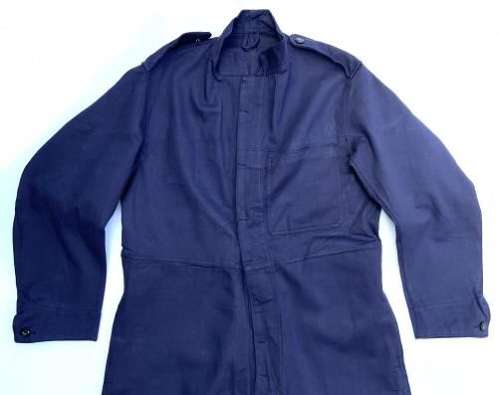 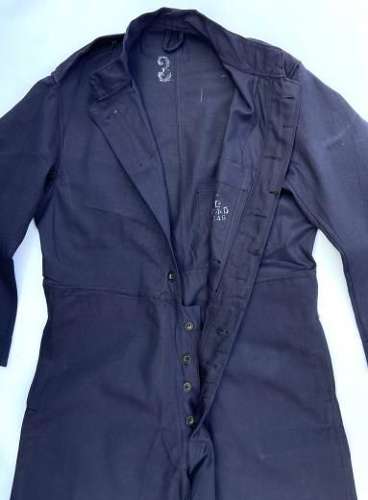 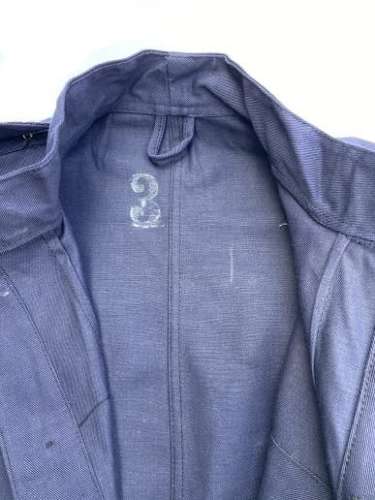 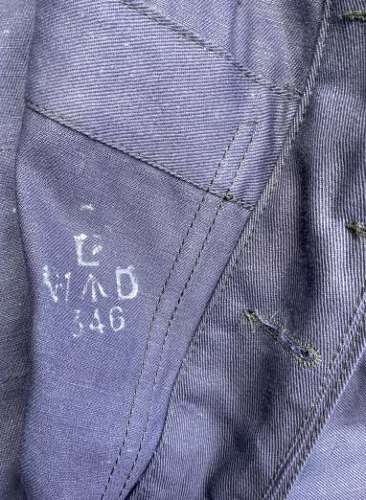 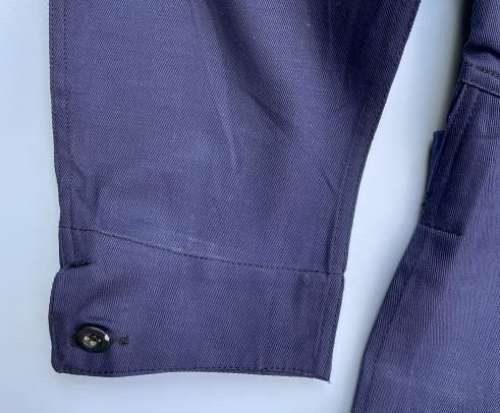 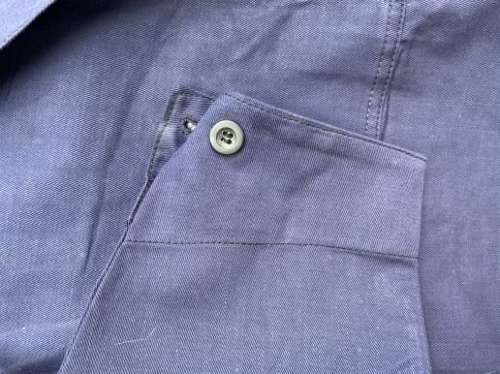 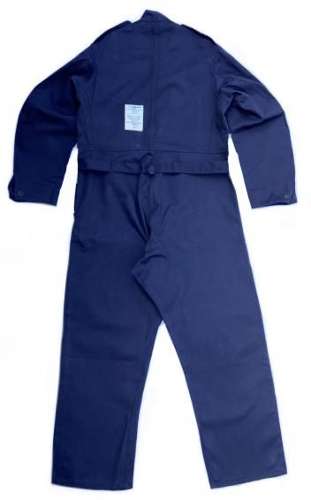 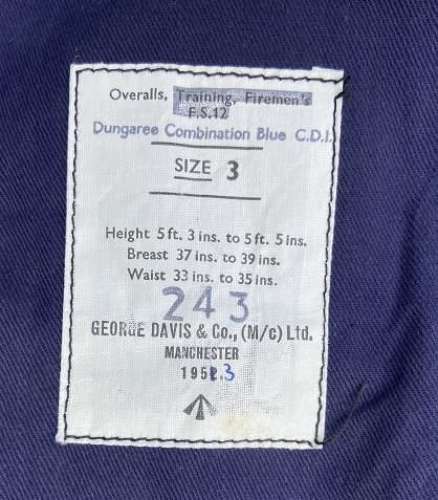 These overalls were originally labeled as 'Overalls, Training, Firemen's F.S.12' but have been redesigned Dungaree Combination Blue C.D.1'.

This pattern of overalls closely follows that used by a variety of people during the Second World War making them an ideal stand in for an original wartime dated example. This pattern is close to that used by the RAF and the WAAF as well as by as those serving on the Home Front.

Made from a deep indigo coloured sanforized cotton, the overalls are a simple design as was favoured from the Great War through to the Second World War. They feature a buttoning front and a stand collar, typical of earlier overalls. They have long sleeves and a buttoning cuff, single chest pocket and slash pockets to the hips. Epaulettes are present to the shoulders and fasten with black revolving shank buttons, as commonly found on workwear, whilst the rear features a cinch-back belt and buckle - Another typical early feature.

The original manufacturers label is still present to the rear of the overalls and is both bright and legible. The manufacturers name is stated as ' George Davis & Co., (M/c) Ltd.' of Manchester and the date of 1952 is present which has then be altered to 1953. Below this information is the War Department broad arrow marking. The overalls are a size 3 which are intended to fit someone of 5'3" - 5'5" with a 37-39" chest and a 33-35" waist.

There is also a War Department inspection stamp in white ink inside the overalls which is surmounted by the letter 'L'. In the same white ink is a large number 3 which refers to size.

The overalls are in dead stock, unworn condition and have clearly been in storage since they came out of the factory. Whilst they are in almost perfect order they are creased and have some odour from storage.

A fantastic set of original coveralls in virtually brand new old stock condition. Vintage items in this unworn condition are becoming hard and harder to find!