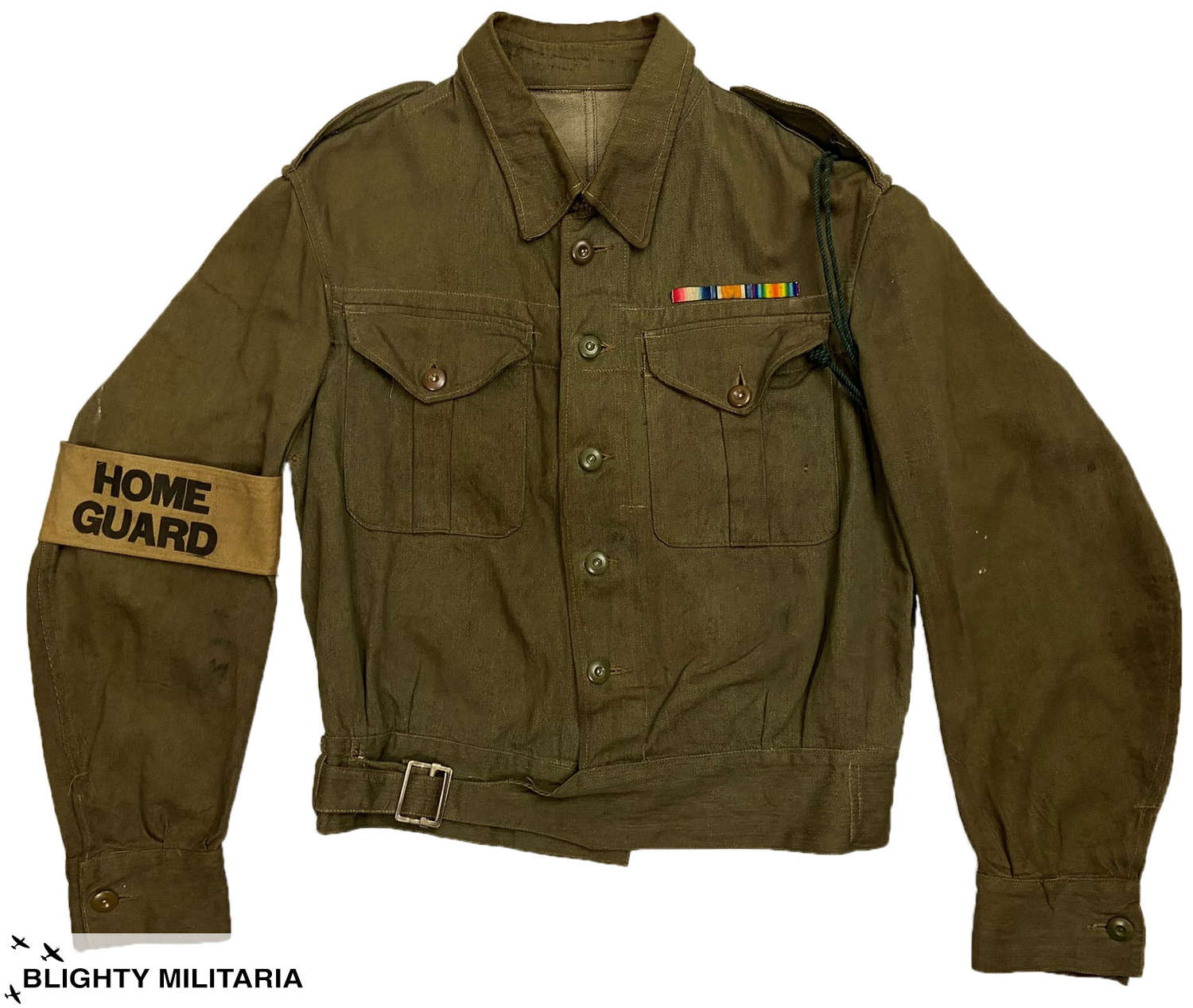 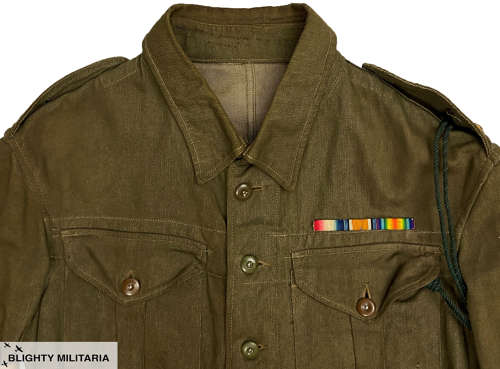 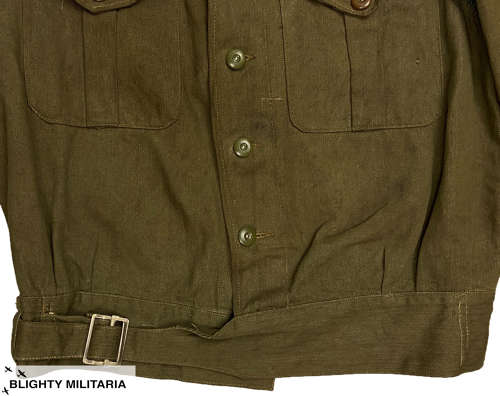 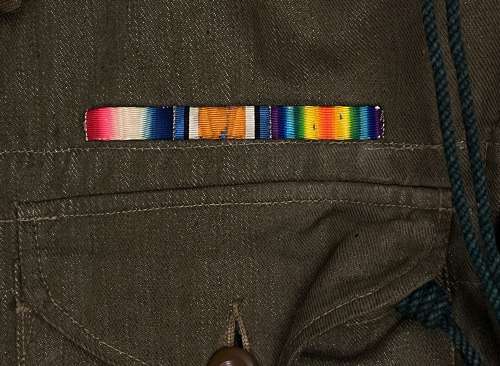 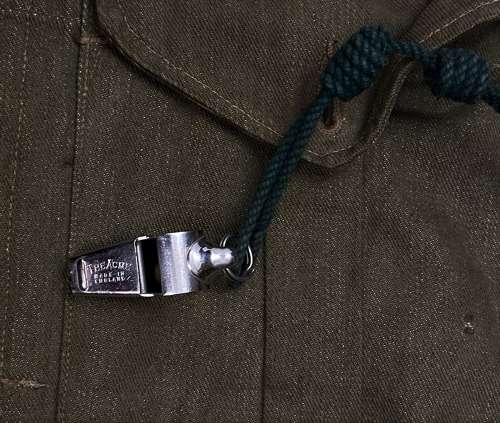 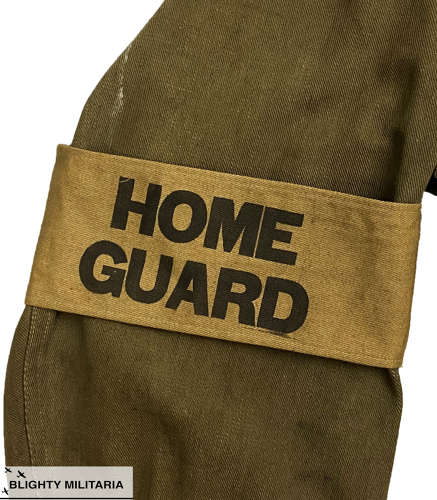 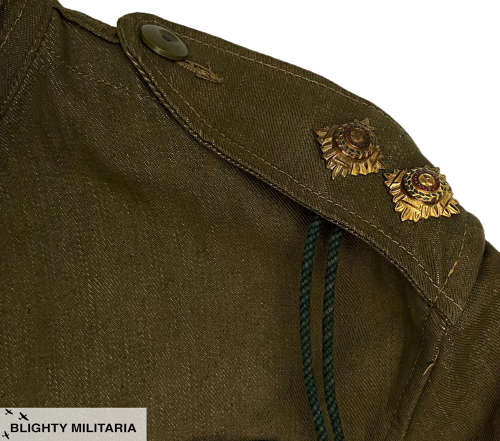 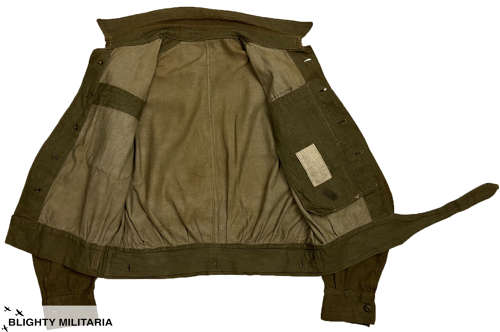 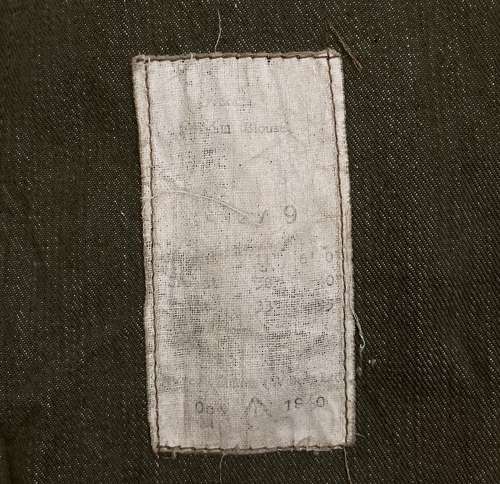 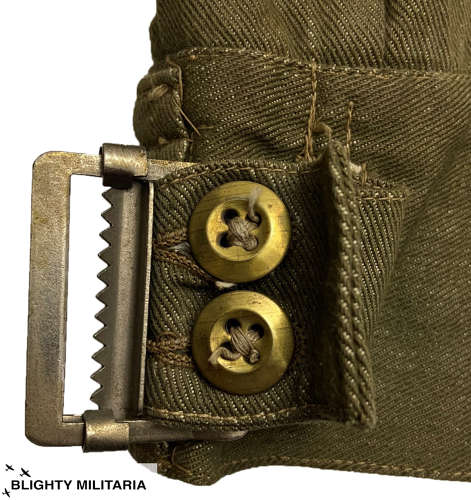 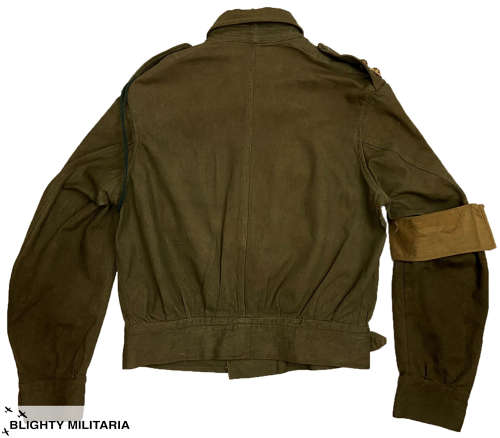 The Home Guard was initially formed as the Local Defence Volunteers, or LDV, on the 14th of May 1940. It was renamed 'Home Guard' in July 1940 and remained active until late 1944. This jacket dates from the early days of the Home Guard making it particularly rare. Following the withdrawal from Dunkirk in May 1940 there was a huge lack of uniform and equipment in the UK as much of it had been left in France. What there was got sent to front line units which led to the denim battledress jackets and trousers being issued to the Home Guard as a stop-gap before they could produce enough of the standard wool battledress uniforms to supply them. Denim was only worn by the Home Guard during this early part of the war and this jacket undoubtedly dates from this period.

The jacket itself is a standard first pattern denim blouse which features pleated breast pockets, green revolving shank buttons and a chrome plated waist belt buckle which is held in place with two-piece brass buttons as are often found on early war uniforms. The sleeve of the jacket is fitted with a Home Guard armband which has been tacked with a loop to the top centre to stop it from falling down the sleeve - clearly a period alteration which is typical of original jackets. Above the left breast pocket are Great War medal ribbons which are again typical of Home Guard battledress and denote that the original owner served at Mons in 1914 as well as through the rest of the war. A green lanyard is fitted to the left shoulder and an 'Acme' brand whistle is attached to the end and stored inside the left breast pocket. Two brass rank stars have been fitted to the epaulettes and denote the rank of Lieutenant.

Inside the jacket the original label is still present and most legible. The size of 9 can be seen as can the War Department broad arrow marking. Most importantly the date of October 1940 is present which ties in perfectly with the period in which these jackets were being issued to the Home Guard.

The jacket is in good condition and it displays very well. There are plenty of signs of wear and use which are consistent across all elements of the jacket including the armband. There is heavy soiling around the collar from sweat and various other stains and marks from use. The overall patina is fantastic; the jacket just oozes originality!

A very hard to find early Home Guard jacket which is a textbook example and would be impossible to better. This will undoubtedly take pride of place in a Home Guard or Home Front collection!


***This jacket was found with a matching greatcoat also listed (item number 53227) which is badged to WR16 - It is quite possible that this jacket was worn in that same unit.