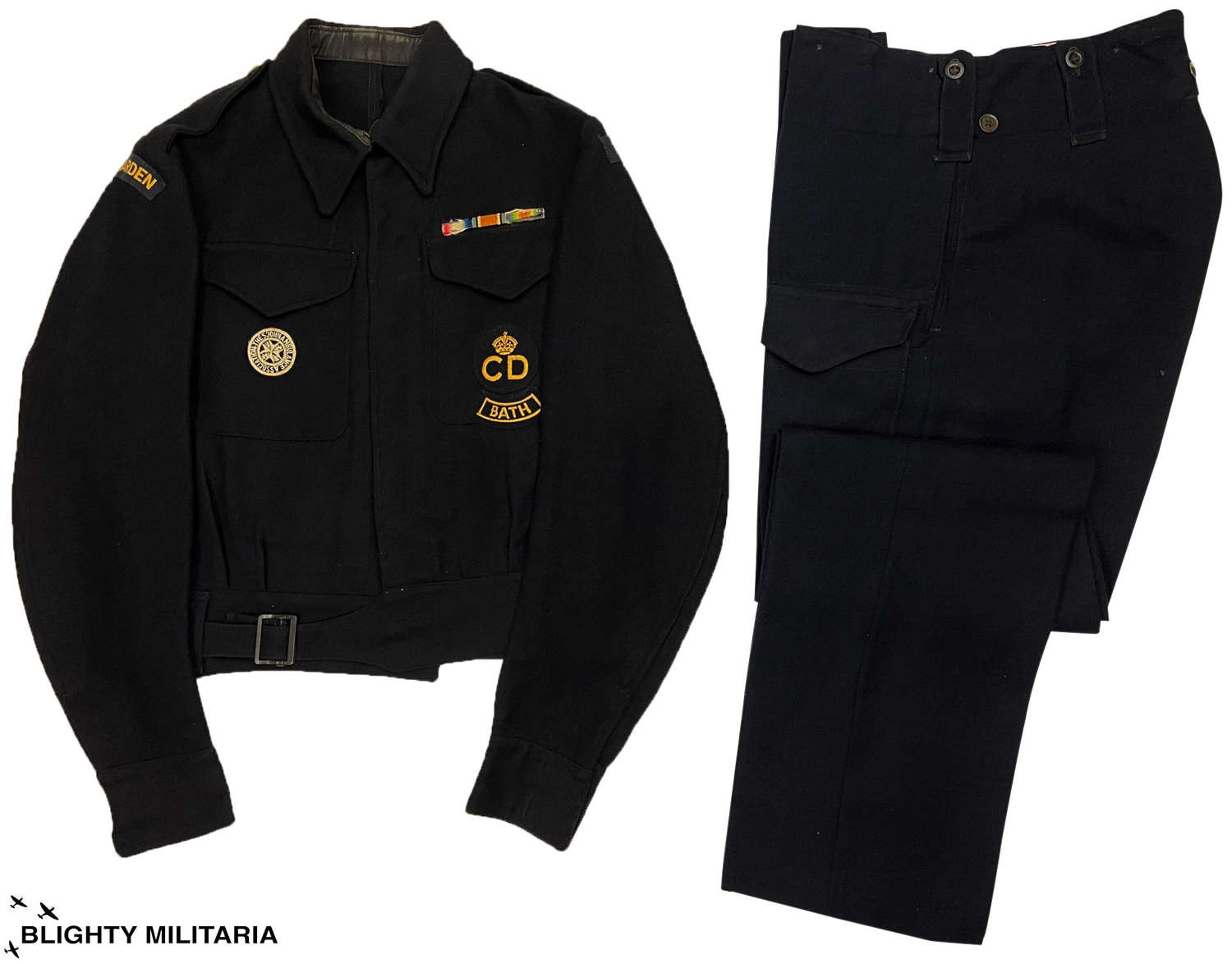 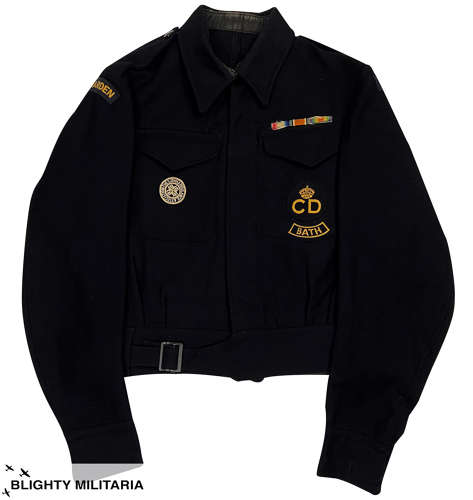 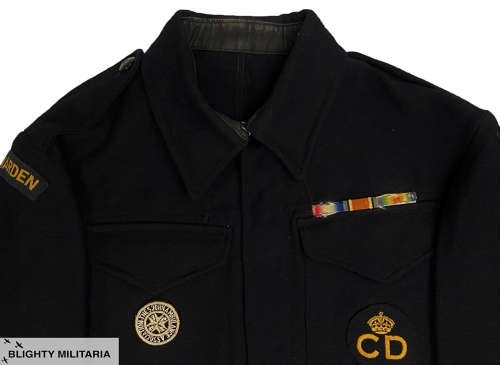 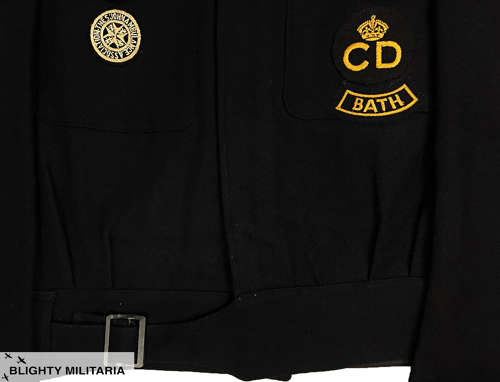 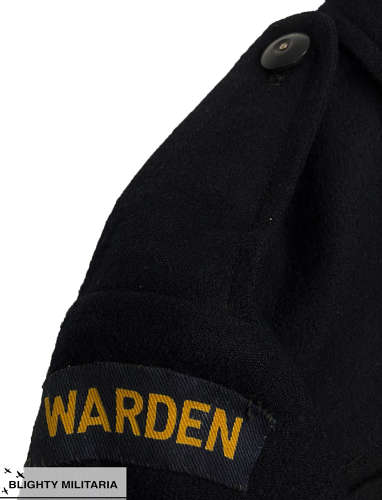 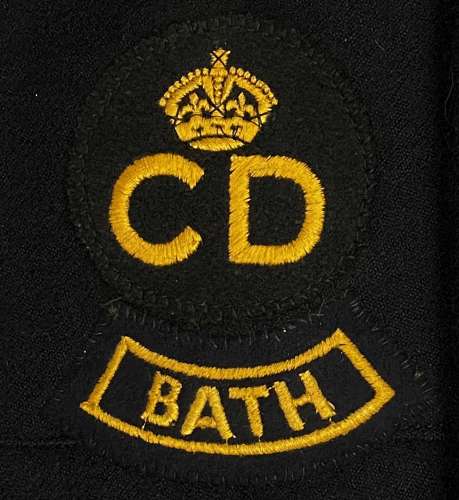 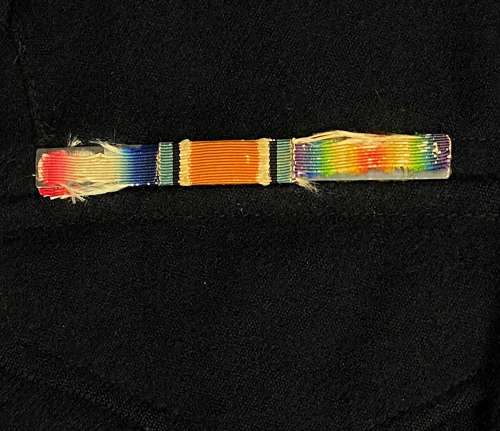 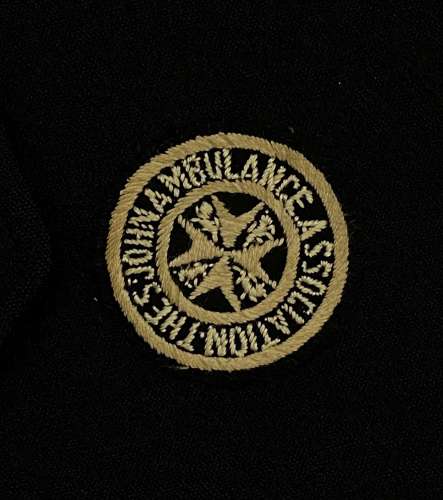 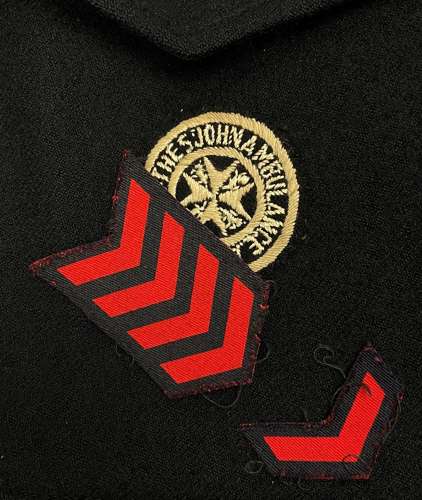 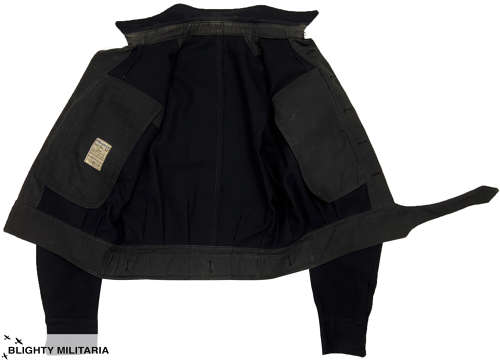 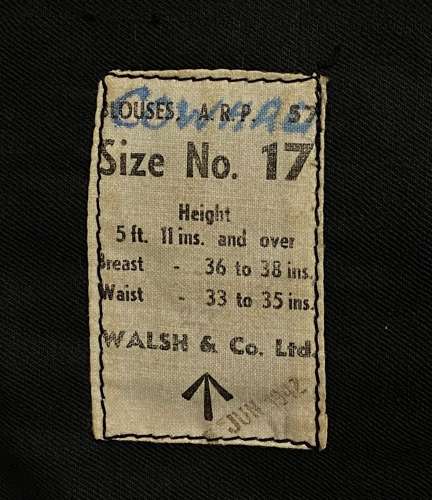 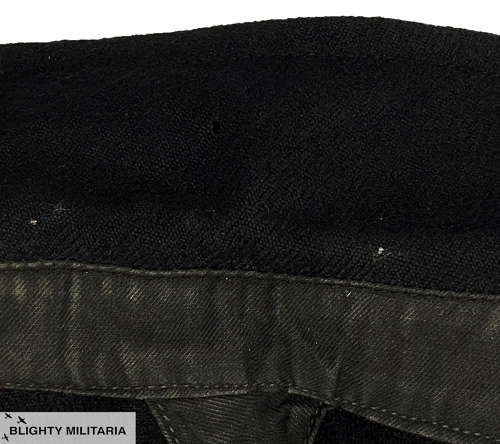 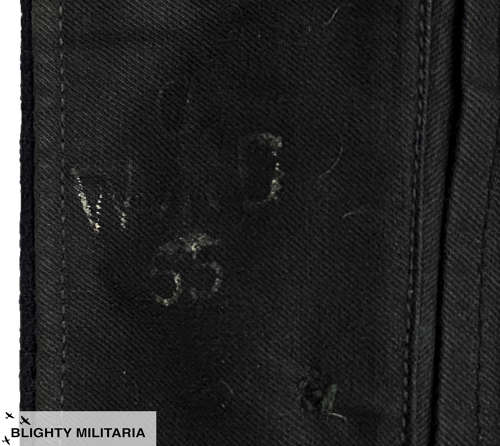 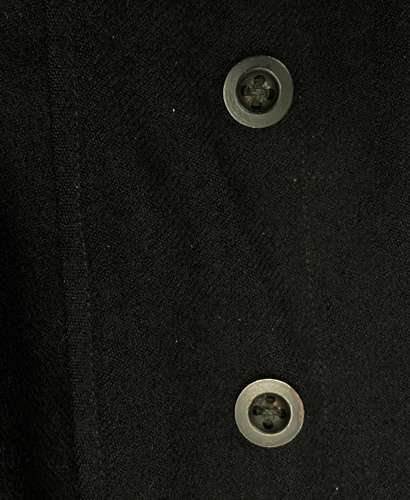 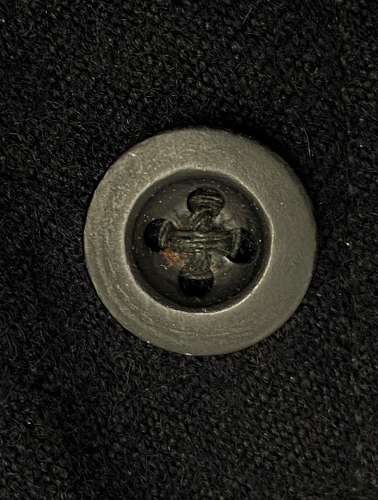 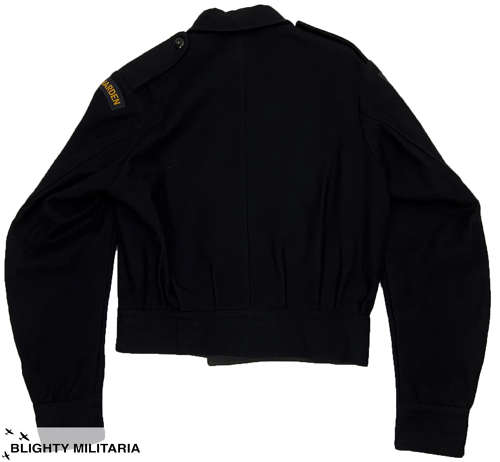 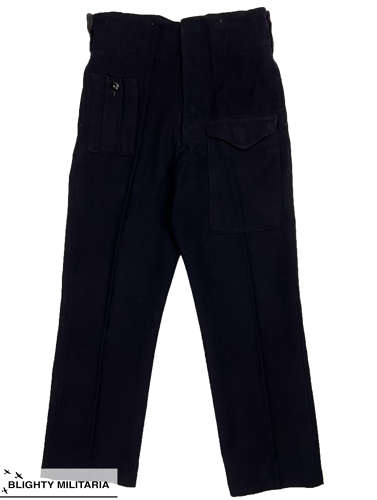 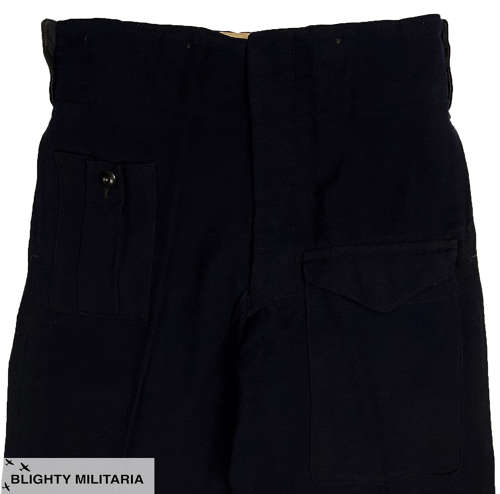 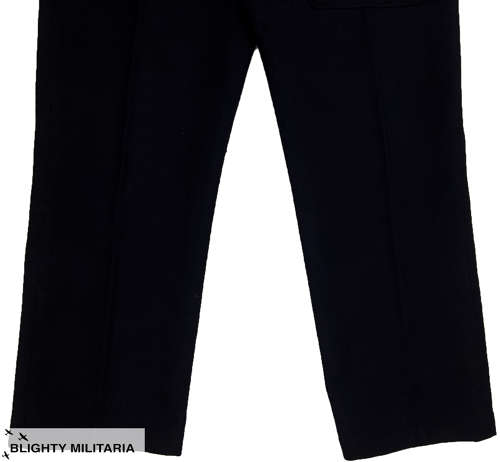 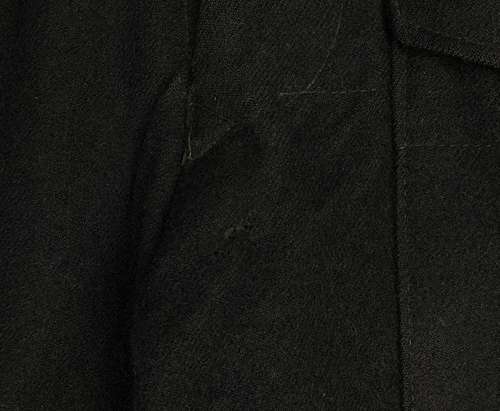 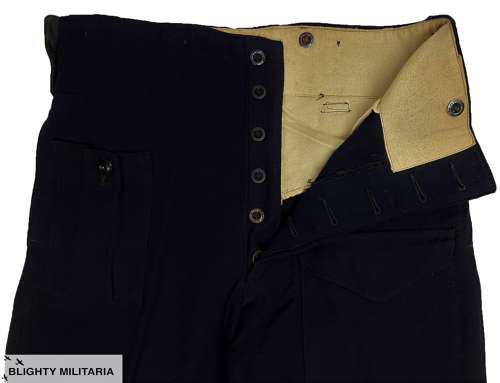 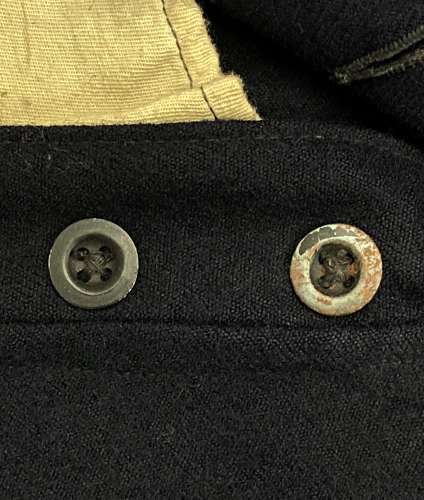 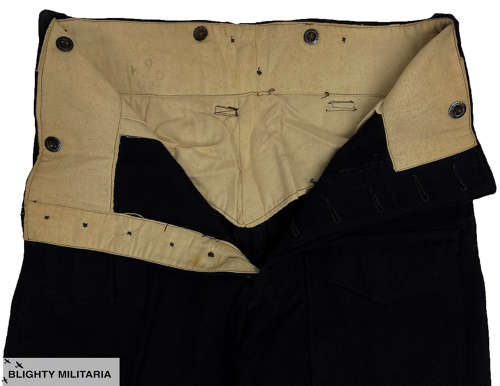 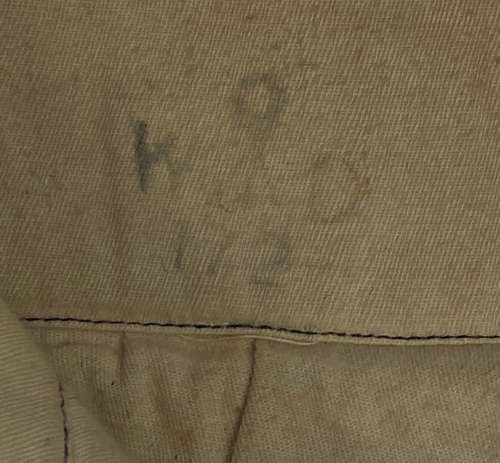 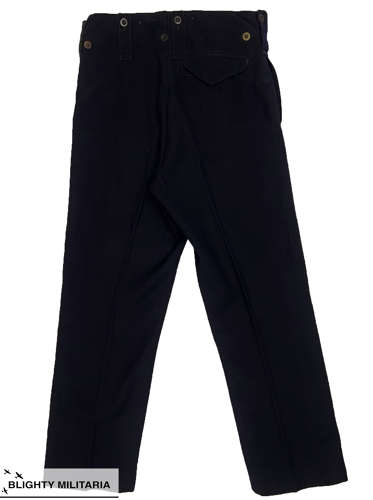 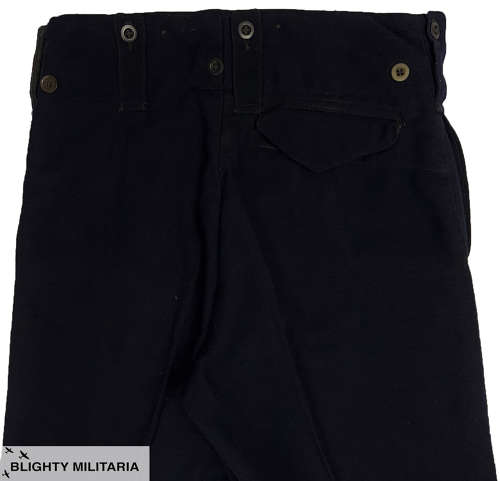 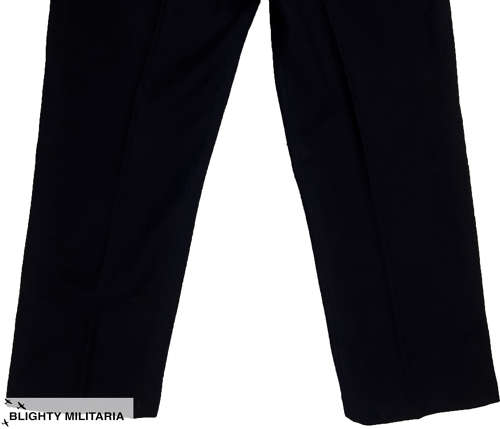 A fantastic original Civil Defence Battledress uniform which belonged to an Air Raid Warden stationed in Bath during the Second World War. The set consists of a fully badged and named battledress jacket and matching 1942 dated trousers.

The jacket is the standard A.R.P 57 pattern which was introduced in 1941. Modelled on the British Army battledress, the jacket is made from a black coloured serge wool and features a fly front and twin breast pockets. All the buttons are the stamped zinc type used for Civil Defence battledress during this period and the waist belt buckle has also had the same finish applied. Inside the jacket there are two interior pockets and the original label is present to the right hand one. It bears the title 'Blouses ARP 57' and the size is marked as 17 which is designed to fit 5' 11" and over, a 36" - 38" chest and a 33" - 35" waist. The maker's name of 'Walsh & Co. Ltd' is present as is the War Department broad arrow marking and the June 1942 issue date. As well as this there is a War Department acceptance stamp which is surmounted by the letter 'O' which denotes 1942 as the year of issue. The original owner has marked his name to the label which reads 'coward'

The jacket is fitted with its original insignia which consists of wartime economy printed 'Warden' shoulder titles, a civil defence breast badge below which is the 'BATH' area title. Above this pocket are three medal ribbons which denote that Coward was a veteran of the Great War and fought in 1914. There is a St. John Ambulance badge to the right pocket and inside this pocket were two sets of printed long service chevrons (picture 9).

The trousers also date from 1942 and were almost certainly issued at the same time as the blouse. The original label is no longer present to the exterior but the War Department acceptance stamp is, and confirms 1942 as the year of issue. Like the jacket, the trousers are fitted with the treated zinc buttons which are specific to Civil Defence battledress. Two of the rear buttons which are used to fasten to the jacket have been replaced with brown horn examples which is almost without a doubt a period modification.

Both items are in good condition for their age and they display well. The jacket is in very clean condition with a small moth nip to the collar which is only noticeable on close inspection (picture 12). The trousers are also good with a small area of moth to the crotch (picture 20) and another small nip to the leg. These are again only noticeable on close inspection.

A fantastic original Home Front uniform in unmolested condition. It was issued shortly after the Bath Blitz of April 1942 which could suggest that it was a replacement for a worn out uniform used during that period. This would make an excellent addition to any collection without a doubt!