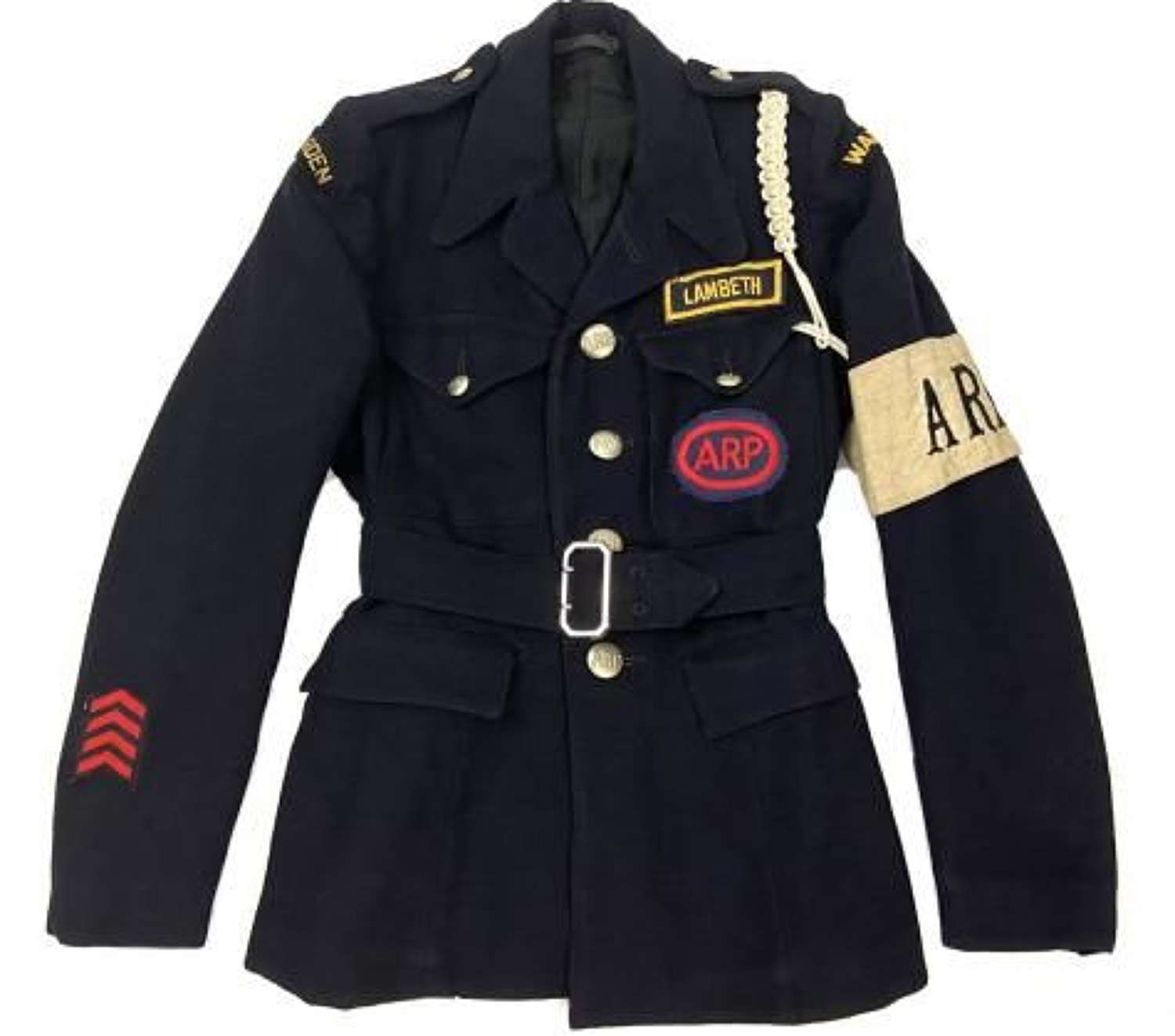 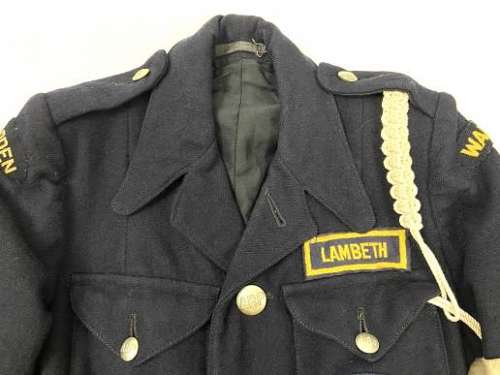 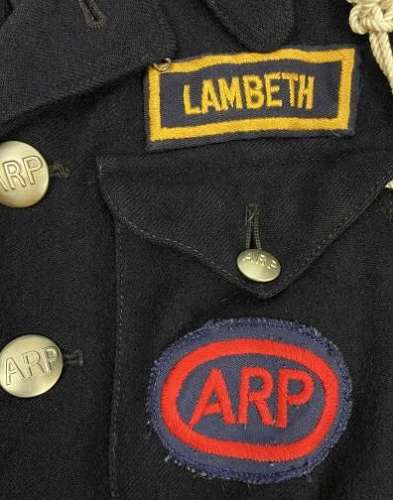 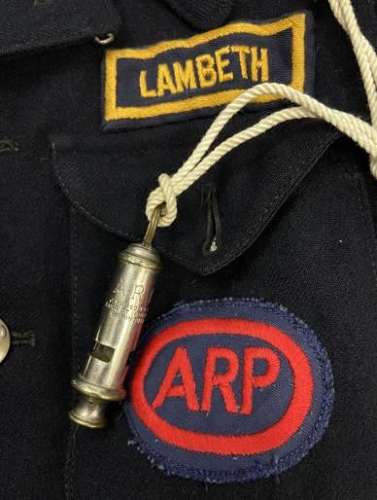 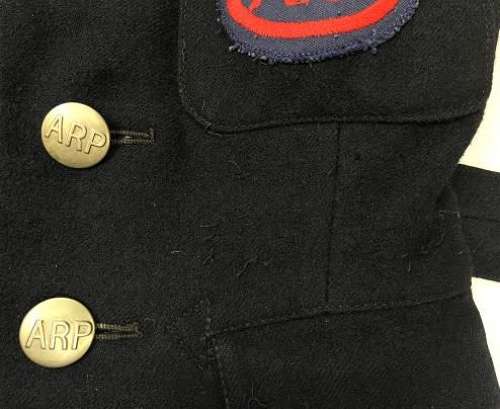 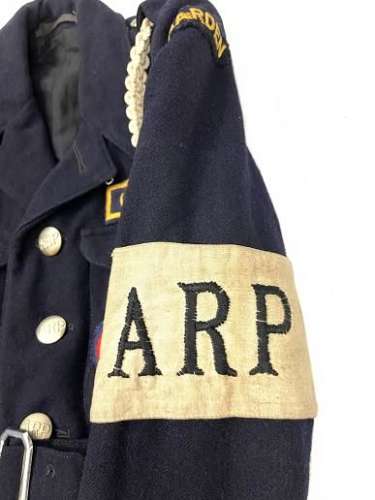 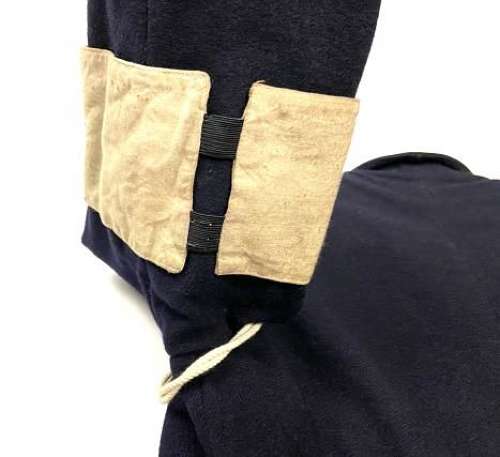 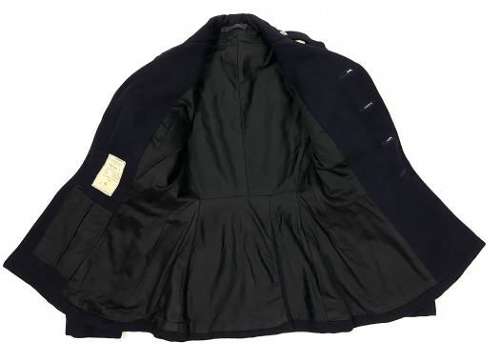 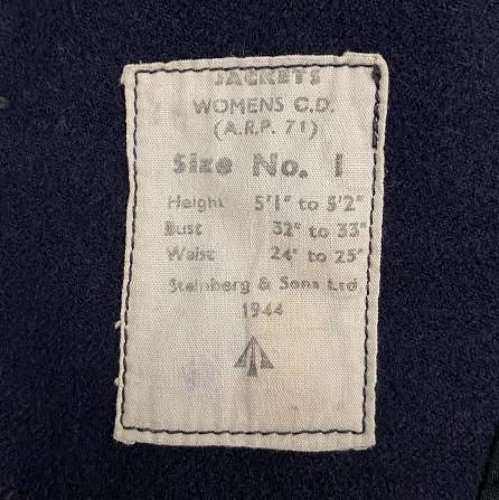 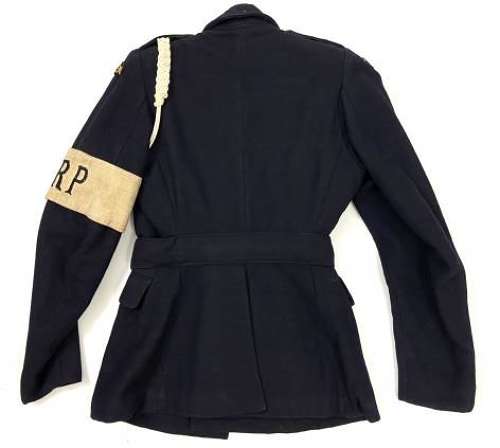 A stunning original 1944 Dated 'Jacket Womens C.D. (A.R.P 71)' which belonged to a lady ARP Warden stationed in the London borough of Lambeth.

This pattern of tunic was introduced in the early part of the Second World War for women serving in the Civil Defence and was worn with either the ARP 73 Slacks or ARP 72 skirt. Made from a dark navy blue serge wool, the tunic features four front pockets; a waist belt with chrome plate waist buckle, silver ARP buttons and a notched collar.

The insignia on the jacket is what really makes this an incredible piece. The right sleeve features an early pattern ARP armband which has been lightly tacked to the sleeve. and was no doubt worn to show that the original owner had been serving since the beginning of the war. Similar to this is the early ARP overall patch fitted to the left breast pocket. Made from the same blue denim as the ARP 41 Pattern bluette Overalls, or 'Combination suit' and featuring red embroidered letters, it again indicates long service. A set of printed red chevrons to the lower left sleeve go on to prove this theory. Below the ARP badge is the area marking which reads 'Lambeth' and would suggest that the original owner would have been involved in both the first and second Blitz. The top of each sleeve features the standard yellow on black embroidered 'Warden' shoulder titles.

Another particularly nice feature can be found under the belt. There are clear remnants of where an oblong badge has previously been attached out of sight. This was a common thing for women to do when they moved from one district to another or had to remove their district badge for another reason. It is possible the the Lambeth badge was moved to be hidden under the belt before being re-instated later in the war. It is none-the-less a very nice original feature which adds to the story of the jacket.

A white lanyard is fitted to the left shoulder which has an ARP whilst attached to the end of it, which again appears to be original to the tunic.

Inside the tunic the original label is still present and is bright and legible. It states the size as No.1 and bears the 1944 date as well as the War Department broad arrow marking. The manufacturers name of 'Steinberg & Sons Ltd' is also present.

The tunic is in good condition for its age with only some signs of wear and use. The only real flaw I can find is a small hole to the bottom of the tunic at the rear. This is small and only noticeable on close inspection. Overall the tunic displays very well indeed.

This is a fantastic original tunic with a plethora of lovely original badges. Not only this but it was worn by someone who would have been involved in the London Blitz making it a real collectors piece. A must have for the serious Home Front collector!