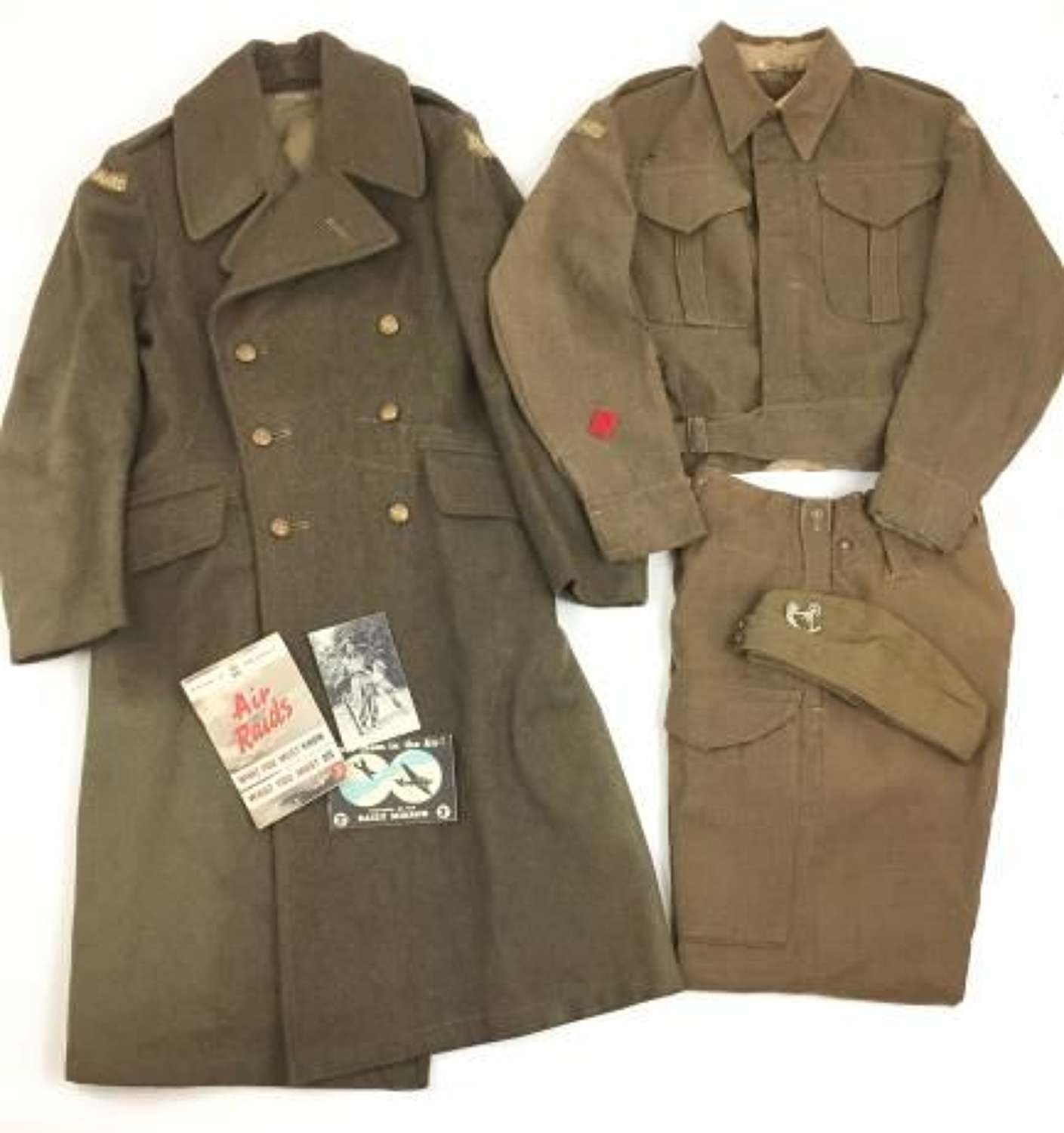 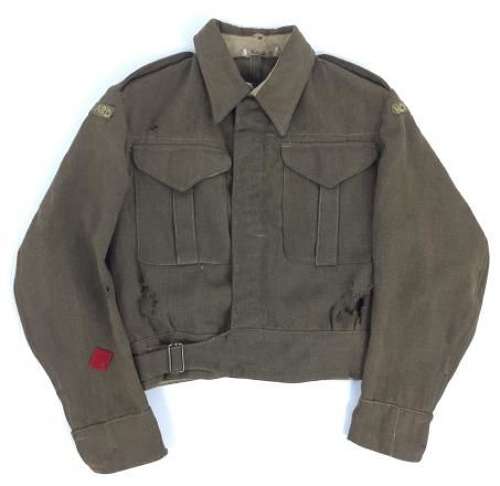 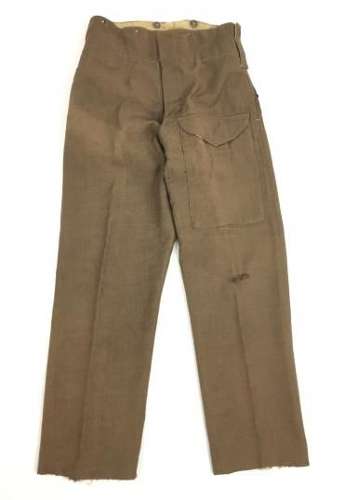 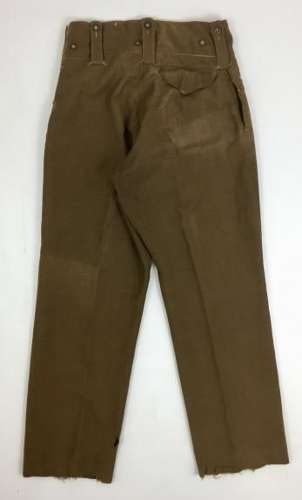 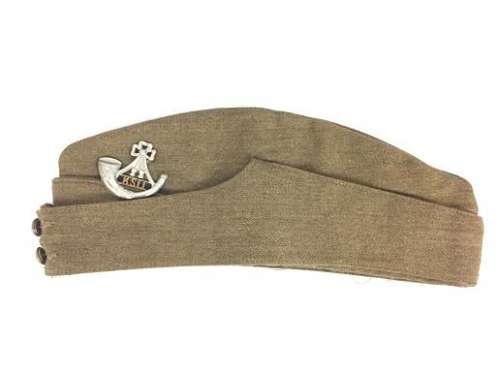 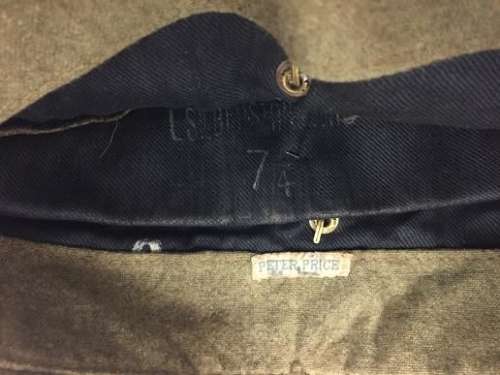 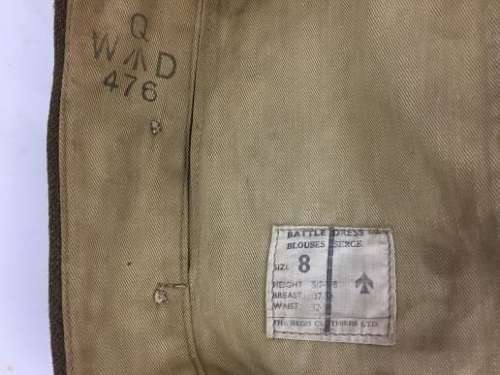 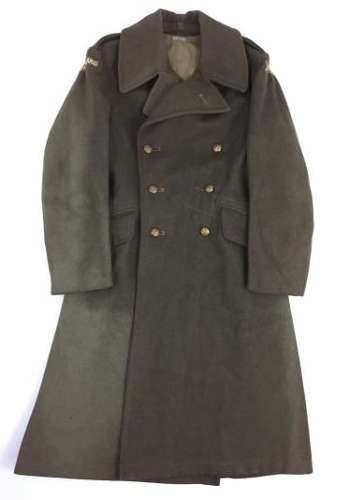 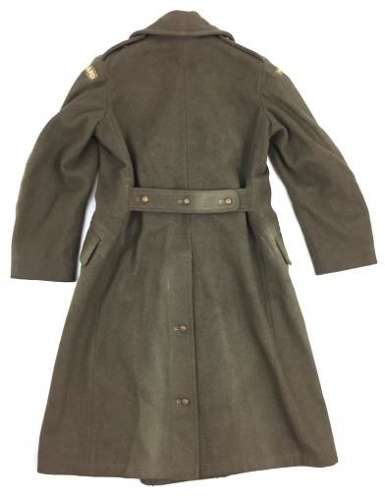 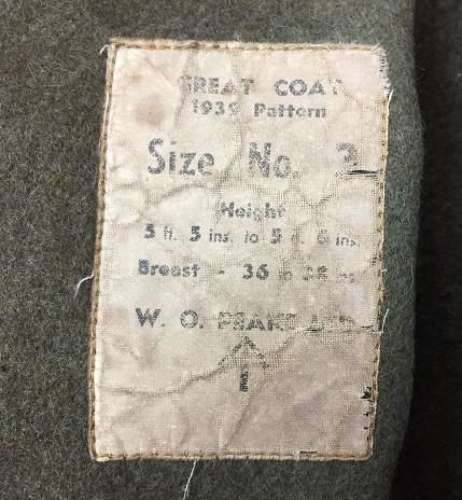 SOLD
A brilliant and rare example of a Home Guard uniform grouping named to Peter Price who was a private in the Albrighton Home Guard during the Second World War.

The blouse and trousers are both original 1940 pattern (often called 1937 by collectors). This pattern came into service during July 1940 and was used throughout the war. The blouse retains its original label which is still nice and clear and states size No.8 and the 1940 date can also be made out. The jacket also features original Home Guard shoulder titles on each shoulder and a red diamond on the lower right sleeve.

The condition of the blouse and trousers is bad with extensive wear and a number of large holes etc. It does display very well as a set non-the-less, but please study all the photographs carefully. The dressing pocket from the trousers has also been removed.

The greatcoat is an early 1939 pattern example which still retains a nice clear label as well as stamping. The coat is marked as a size 3 and bares the War Department arrow, but no date. This pattern was soon superseded by the 1940 pattern dismounted greatcoat however and is of early war manufacture without a doubt. There are some areas of fading on the greatcoat where it has been left hanging for many years. Apart from that the coat is in excellent condition and is complete with all of its original buttons etc. Inside the greatcoat is a name tag with the name 'Peter Price' in it.

The forage cap in this grouping also as a matching name tag, confirming the originality of this grouping. It also has a Kings Shropshire Light Infantry cap badge which was the badge worn by the Albrighton Home Guard. Inside the cap is marked as a good size 7 1/4. The cap is worn but displays well.

Also included with this grouping are two named pamphlets which belonged to Peter Price. The first is 'Air Raids' and the second is 'Spot them in the air', both of which Peter used during the war. As well as this is an original print of Peter wearing the uniform whilst serving with the Home Guard.

All in all, a fantastic grouping. Albeit somewhat worn and tatty in places, this is still an incredibly genuine Home Guard collection which displays nicely.